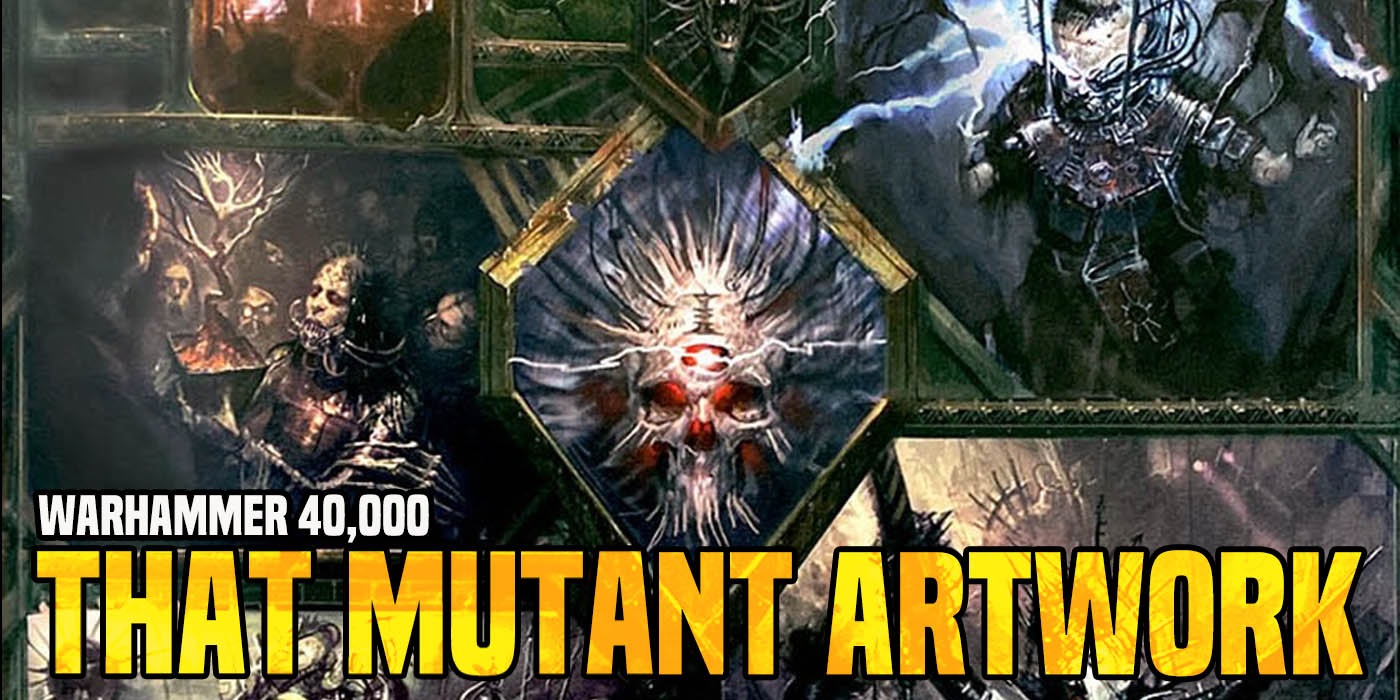 We need to talk about those freaky mutants from the Warhammer 9th edition core book.

Back in June, we talked about That Xenos Artwork. Now it’s the Mutant’s turn. They got a full page spread and we need to dissect and breakdown the image we’ve been given. What image? Glad you asked: 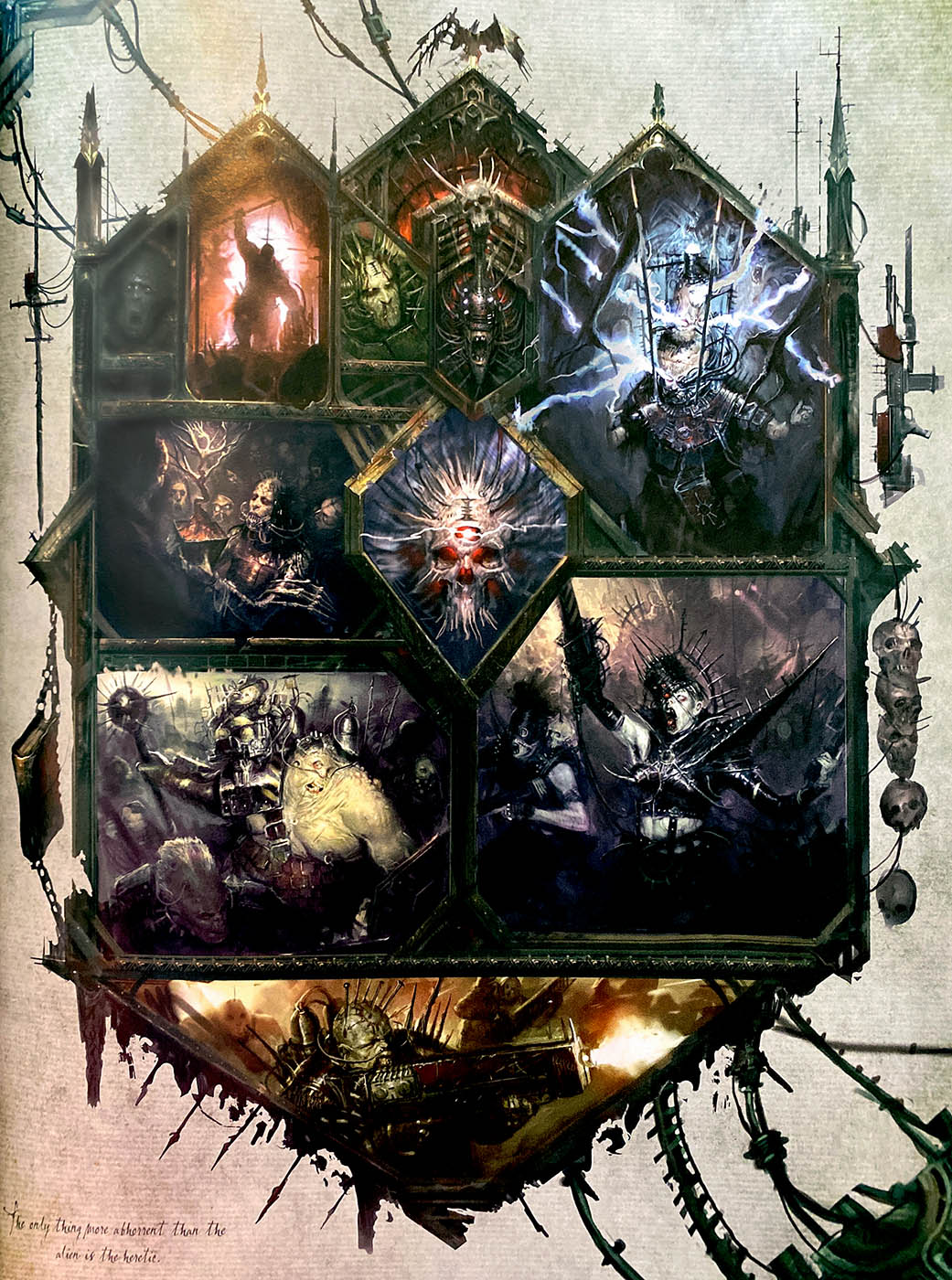 This image! Now, unlike the Xenos image, this one looks like most of these images are based off of humanoids of some type. They might be chaos mutants or just plain ol’ Imperial Mutants but they are clearly not Xenos. Which is why we’ve dubbed this page the Mutant Artwork. So let’s go through each image and ask “what are we looking at?”

We’re lumping all these images together to start. We’ve got 3 different “heads” and quite possibly some sort of techno-mutant uprising. Note that one of the heads has the Inquisitional brand on its forehead. Perhaps this mutant is of the Psychic variety and has found a way to be a contributing member of society…eh, who are we kidding – the Inquisition got their hooks in it and it’s been used for [Redacted By The Inquisition]. 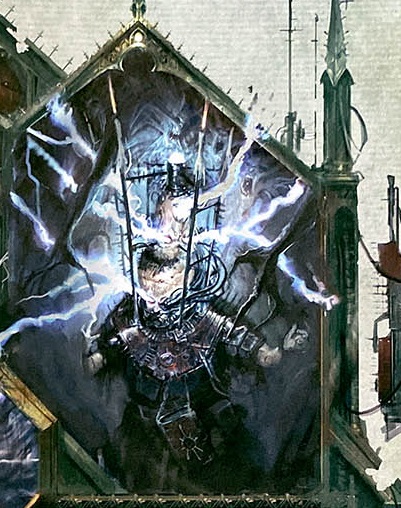 Speaking of Psykers and Mutants – here’s another! This one might have some chaos-leanings based on the book that’s carrying, but it you ever watched Total Recall and thought “Man, Kuatto would be way cooler if he Opened Your Mind from the guys own head” – well, that’s kind of specific but there you go! Or maybe it’s a take on Masta-Blasta from Beyond Thunderdome…that’s a theme we’ll see again. 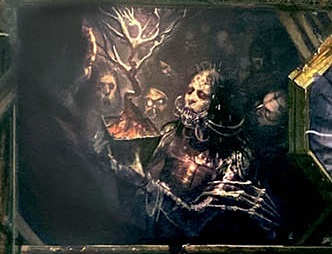 This one is…weird. We’ve got a Mutant that’s really into gardening apparently. And he’s got a whole social club that is also behind him and they are apparently fans of their latest pottery project. What’s going on and why are they such big fans? I have no idea because I’m not a heretic. 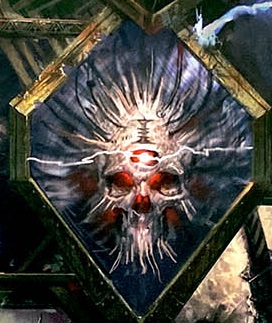 Here’s another Mutant who clearly tried to be a productive member of society by joining the ranks of the Inquisition. Probably by their own free will and totally not under any sorts of duress. It’s a skull with some extra protrusions – and an third eye. But that Inquisitional Mark make that A-Okay! 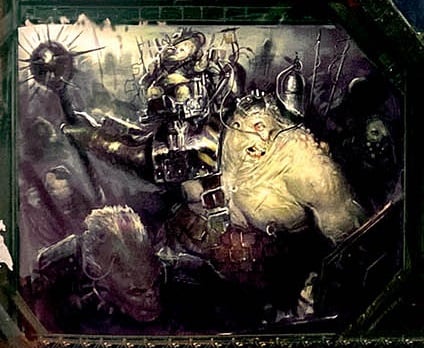 Hey, look! Another Master-Blaster thing going on! This one has 100% more nipple rings however. There’s a lot of mutants in this picture from the little guy riding shoulder high to the bulbous one he’s probably giving commands too. And then there are the background muties as well as the fore-five-six-head in the front. Lots to process here. 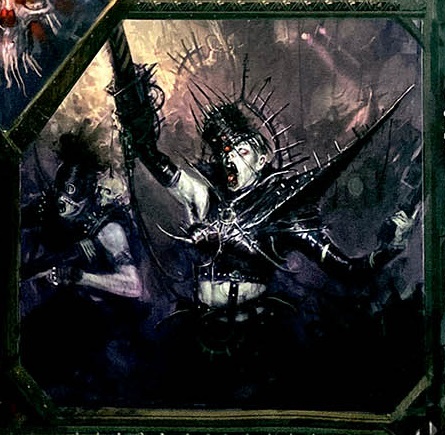 Look, I’m not sure if this one is a mutant or just a really goth Drukhari fan. They got the leather part down. Perhaps they are just really into horror movies from Old Terra. We’ve got a little Hellraiser mixed in with some Evil Dead…and Madonna? Anyhow, they are clearly Clive Barker fans – which is perfect for the Grimdark!

Finally we have this las image. You know, I don’t even think this is a mutant so much as a citizen that has just made some tough life choices. They are also fans of Hellraiser but I think they got a little confused about how Pinhead actually looks. Maybe it’s more of a statement instead of a fashion choice. He is firing what appears to be a Bolter – so props to him for getting his hands on one of those.

Could GW be teasing us with some future releases from this artwork? More Chaos Cultists? More Mutants? More fans of Horror movies from the 80’s and 90’s on the way!? Who knows – but we want to hear what you think in the comments!

The only mutants I like from the 90’s wore spandex.