Do you like Fighters? What about the idea of expanded combat maneuvers? Check out a new Fighter from Level Up, the “Advanced” Rules for 5th Edition.

The folks behind the “Advanced 5th Edition” rules continue to ramp up their playtest. Last time, we got to check out new rules for creating your PCs origin story, this week, it’s something much crunchier: the playtest document for a new version of the Fighter. This is a fully backwards compatible version that’s meant to replace the core Fighter featured in the 5E SRD. And alongside it, a list of combat maneuvers that carry shades of my favorite book, the Book of Nine Swords. Check out the playtest, pick a fighting style, grab some maneuvers, and while we’re at it, check out the playtest documents for character creation and take your first crack at an Advanced 5E character. 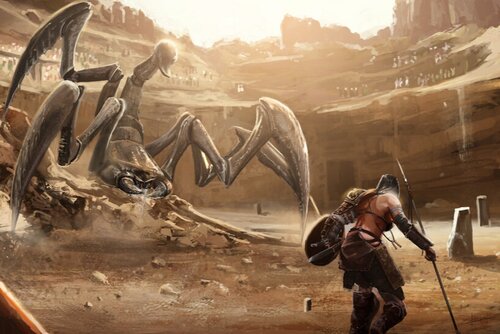 *Exploration knacks, as introduced in this playtest document, only form part of the exploration pillar.

This is a playtest document. We’d love you to try out the rules presented here, and then answer the follow-up survey in a few days.

What this is not

This is NOT the final game. It’s OK if you don’t like elements of these rules; that’s the purpose of a playtest document. Be sure to participate in the follow-up survey in a few days. All data, positive or negative is useful.

What we use this for

Your survey responses help form the direction of the game as it goes through the development process.