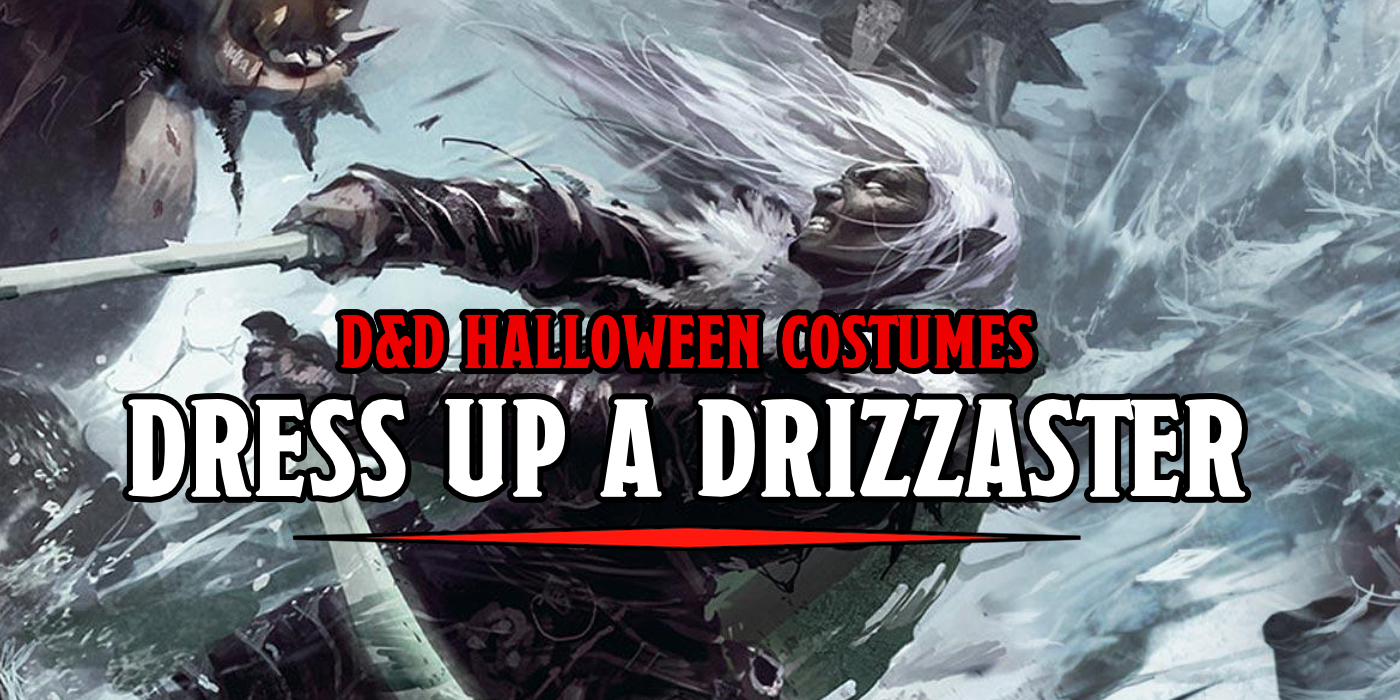 Spooky season is here folks, and D&D has some iconic and questionable costumes coming to an abandoned store in a strip mall near you.

You can always tell when Fall is in the air. The air gets crisper, the leaves start to change. The smell of pumpkin spice wafts from every coffee shop you pass by. And in the gutted remains of a hardware supply store, fabric store, thrift shop, or long-abandoned Outback Steakhouse, SPIRIT Halloween stores crop up. Like a seasonal Hermit Crab, these stores take an otherwise empty husk and transform it into a palace of plastic swords, fishnet stockings, and a sexy version of pretty much any character you can think of. 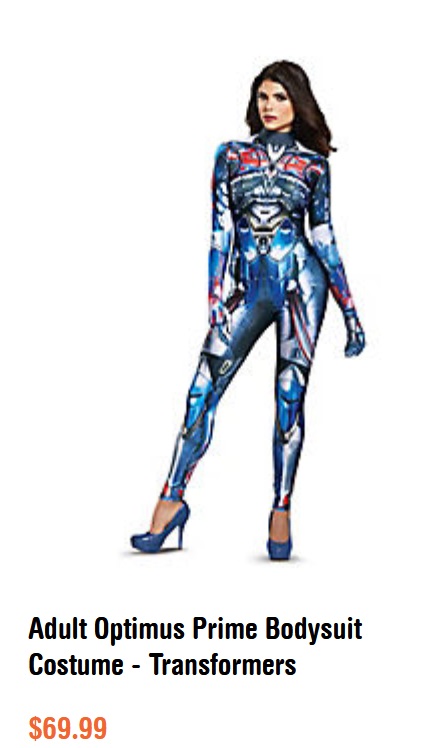 You’re all welcome for that. This year, Spirit Halloween has a wide selection of D&D options available to it. Let’s take a look, shall we? 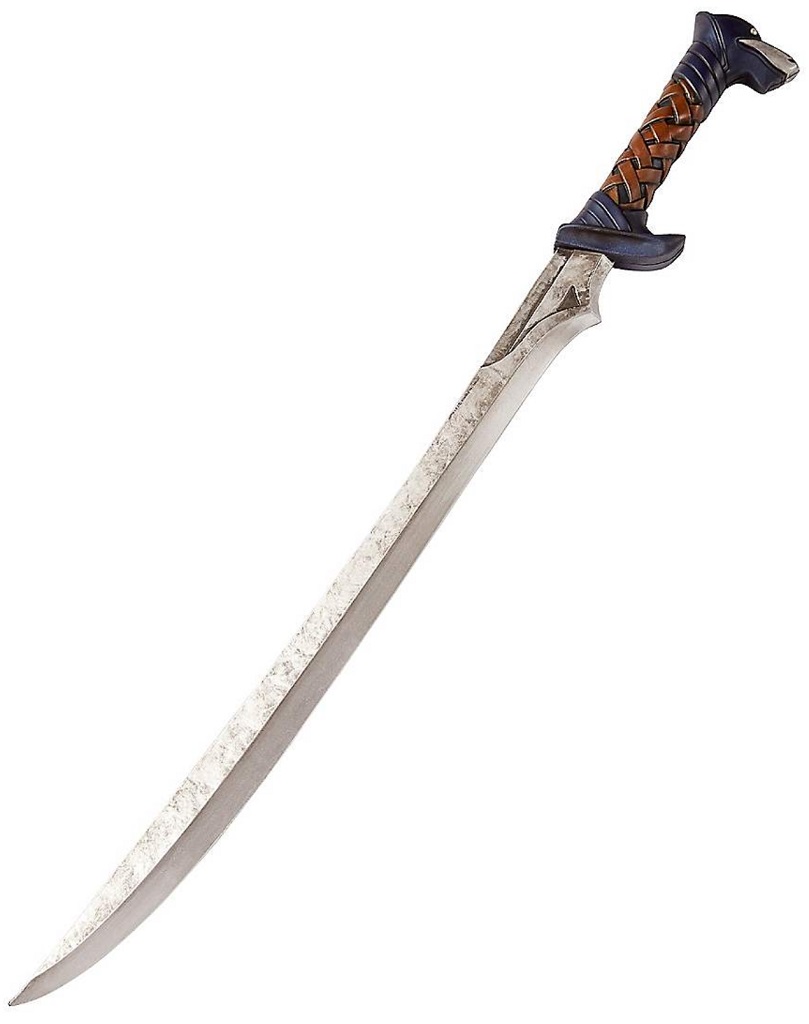 If Halloween meant anything to me as a kid, it was an excuse for my sisters and me to get our hands on plastic swords. Over the years, the level of detail has improved, so much so that with the twin scimitars of a certain drow ranger, you can actually see two different models. Up there is Icing Death, and down below is Twinkle. 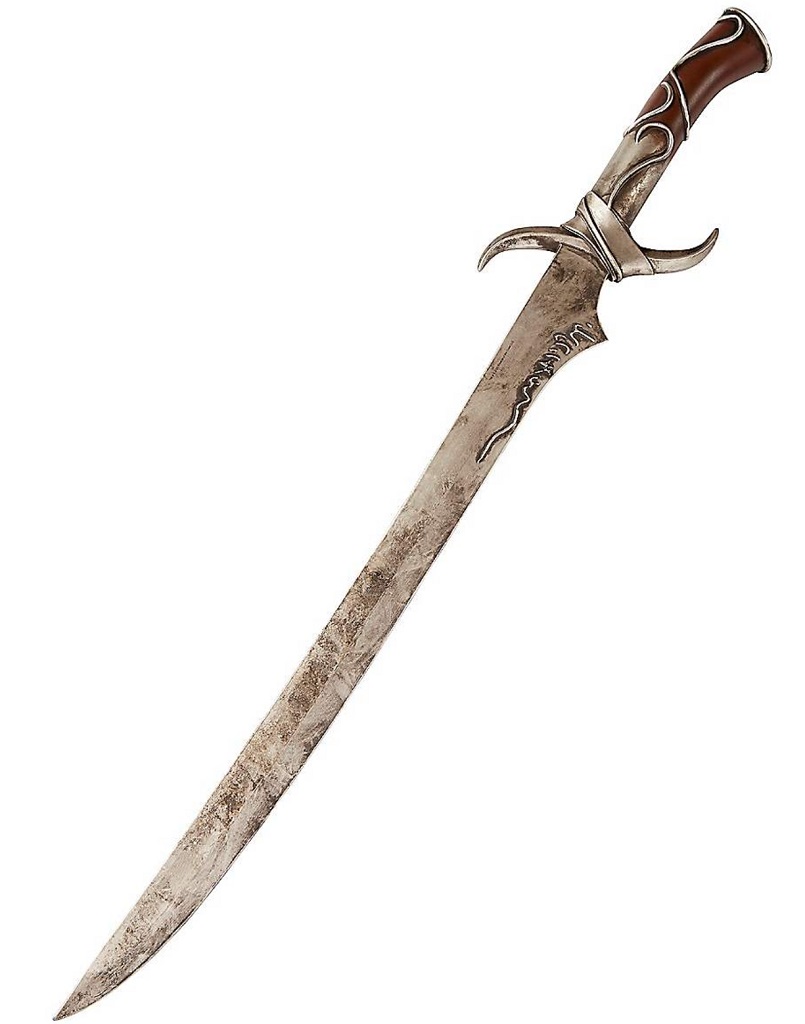 Or is it the other way around? I can never remember. If bows and arrows are more your thing, check out Taulmaril aka Heartseeker, the magical bow belonging to Cattie-brie, again recreated straight off of the pages of an R.A. Salvatore novel. 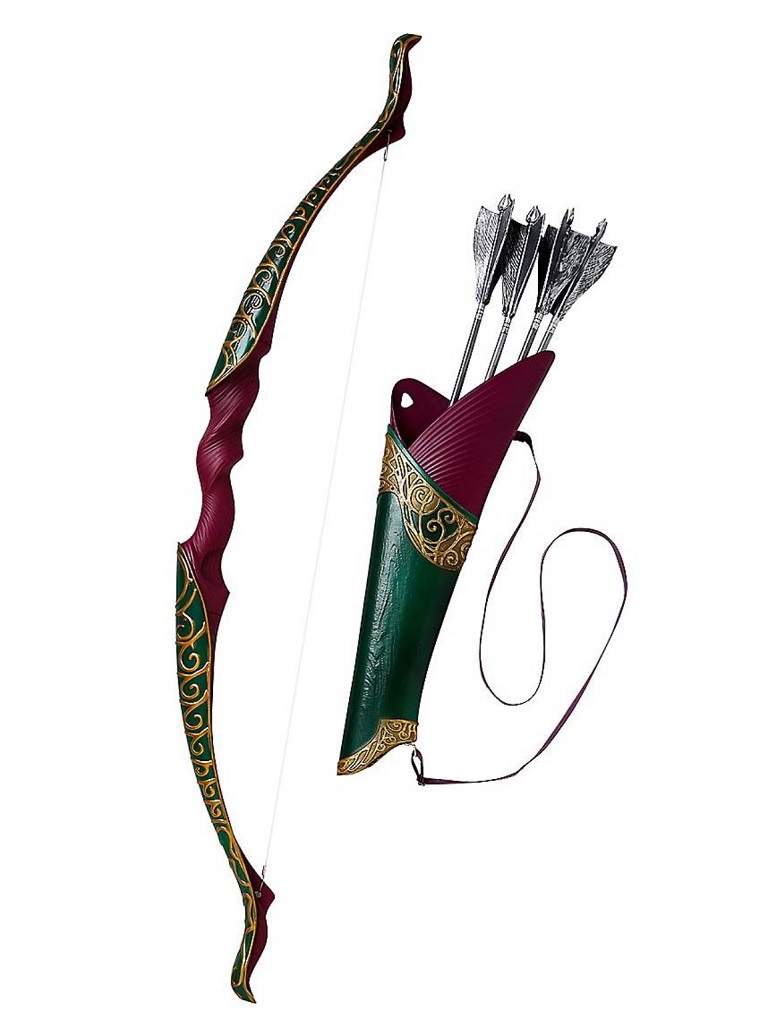 Not to worry if you had/have parents that won’t let you have even replica weapons in the house. There’s also a lovely fleece blanket that is also a map of Waterdeep. That’s definitely a classic Halloween tradition and not at all weird. After all, when you think of dressing up as a character from The Shining, your first thought is: “Which of the two Grady girls is it this year?” but then your very next thought is “How I wish I had a fleece blanket of the Colorado Rockies.” 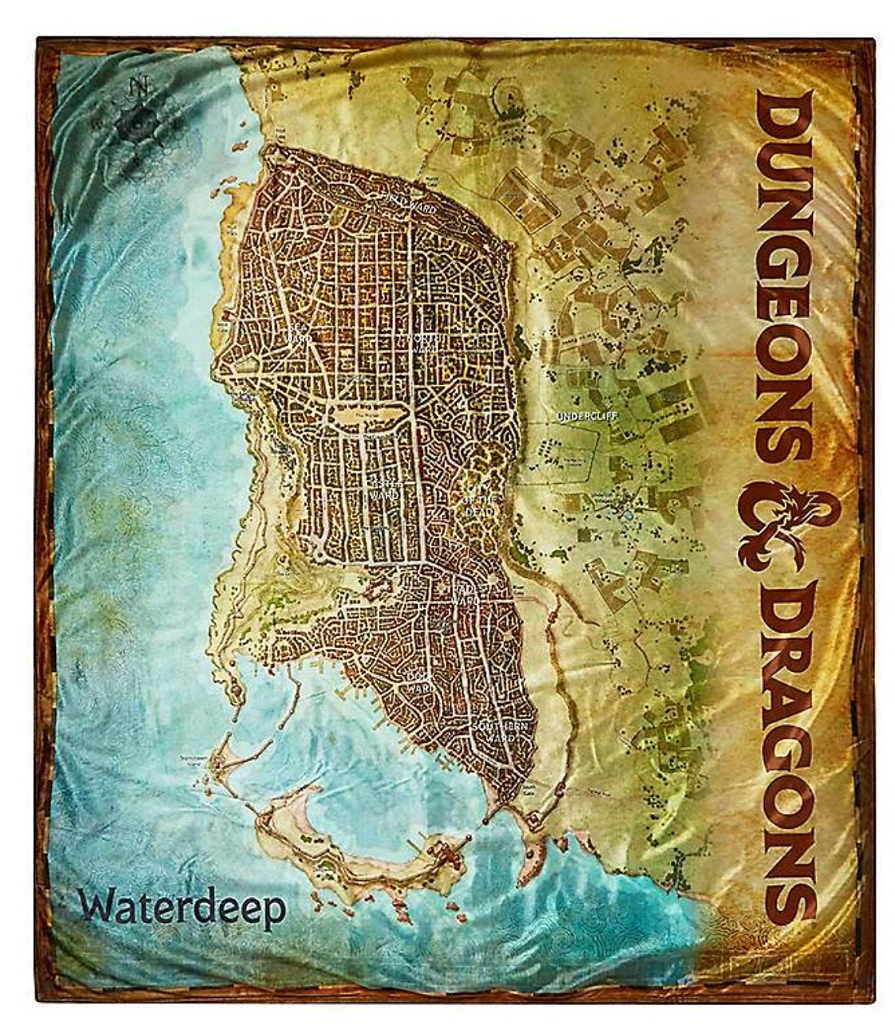 You can also get a D&D journal that looks like a spellbook but is also just a functional journal. So you can write down how much candy you picked up and from which house, compiling notes for where to go trick or treating next year on one page, and on the next, you can keep track of how many times you get shoved in your locker between now and then. 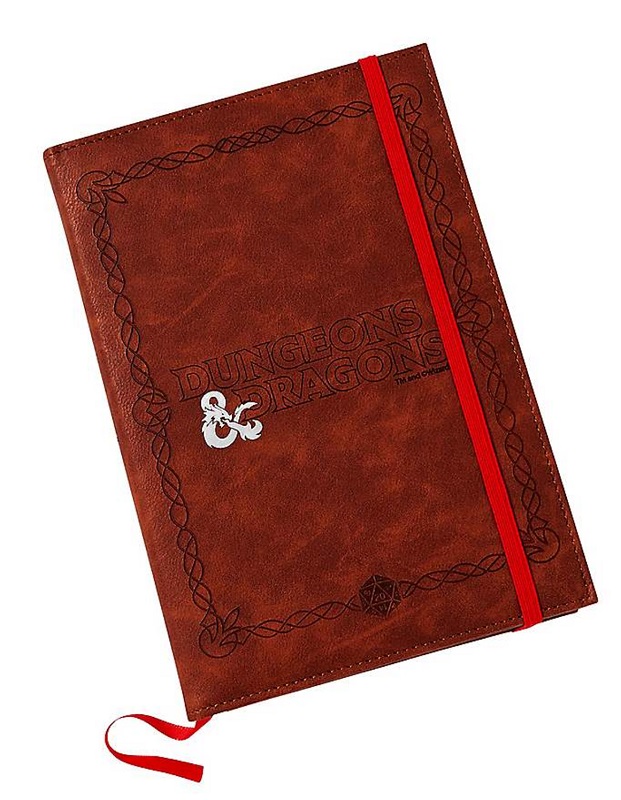 Finally, we get to the good stuff. The full-body costumes. First up we have the “Adult Dungeon Master Costume” which is a terrifying sentence to write, but don’t worry, the actual result is only mildly nightmarish. 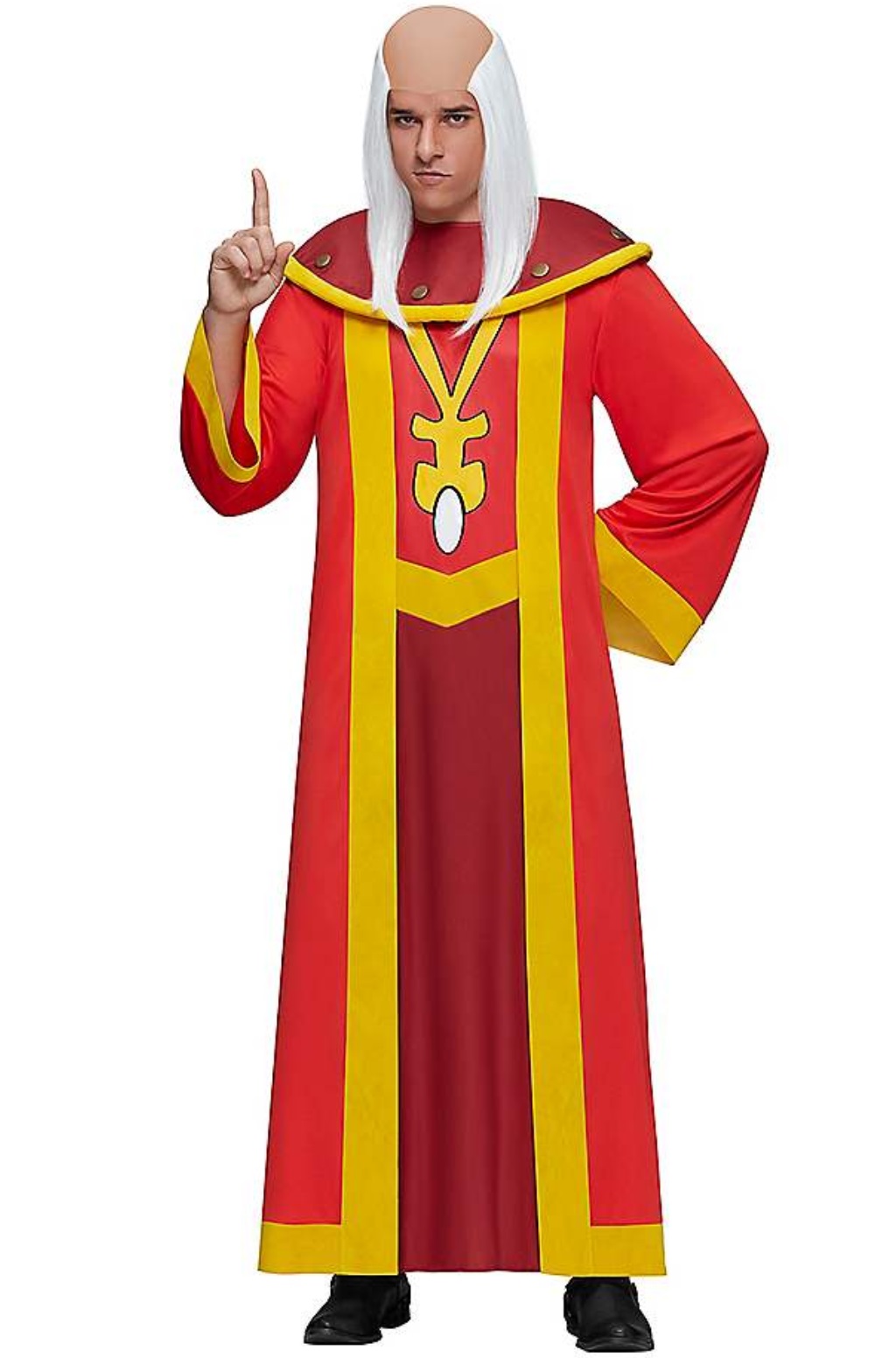 This grim specter is a real-life representation of Dungeon Master from the 80s cartoon and is just about as imaginative as his name. You could pretty easily use the robe as a cleric’s if need be, and it probably looks pretty good on a stream or something.

But the Dungeon Master isn’t the only sexy D&D Halloween costume this year. As you might have guessed from the specially named weapons, there are also costumes for the wielders of said weapons. For Heartseeker, you have Cattie-brie herself. 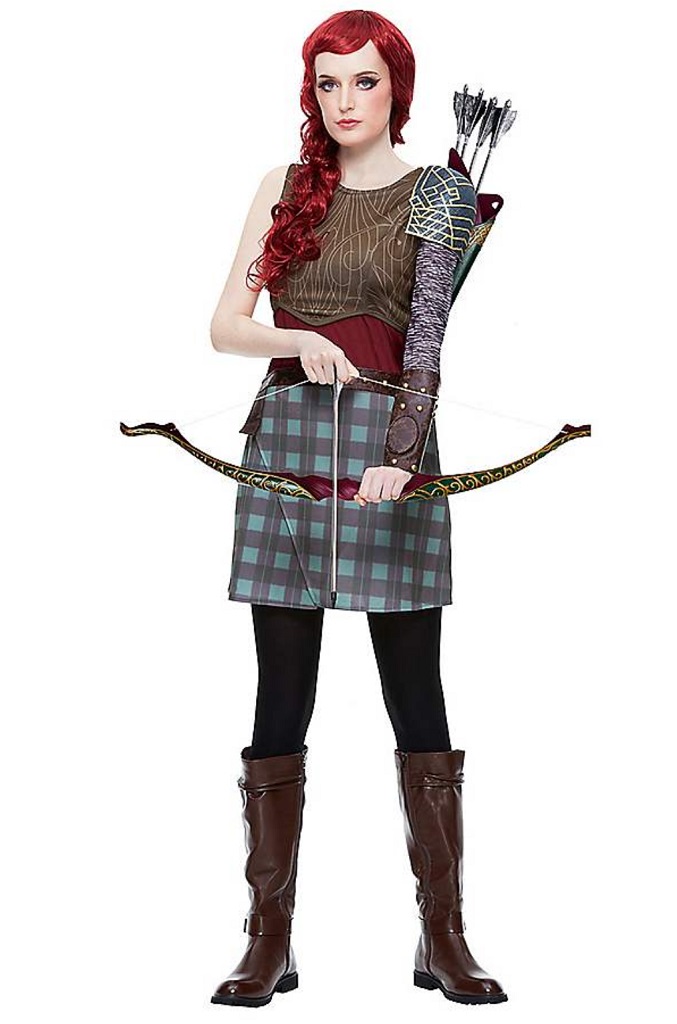 She could probably double as a Merida costume if you’re only interacting with adults. Do not under any circumstances try to pawn this one off on a child, you will be eviscerated with the truth.

And then, of course, there’s everyone’s favorite drow. The dark elf ranger known only as Drizzt. 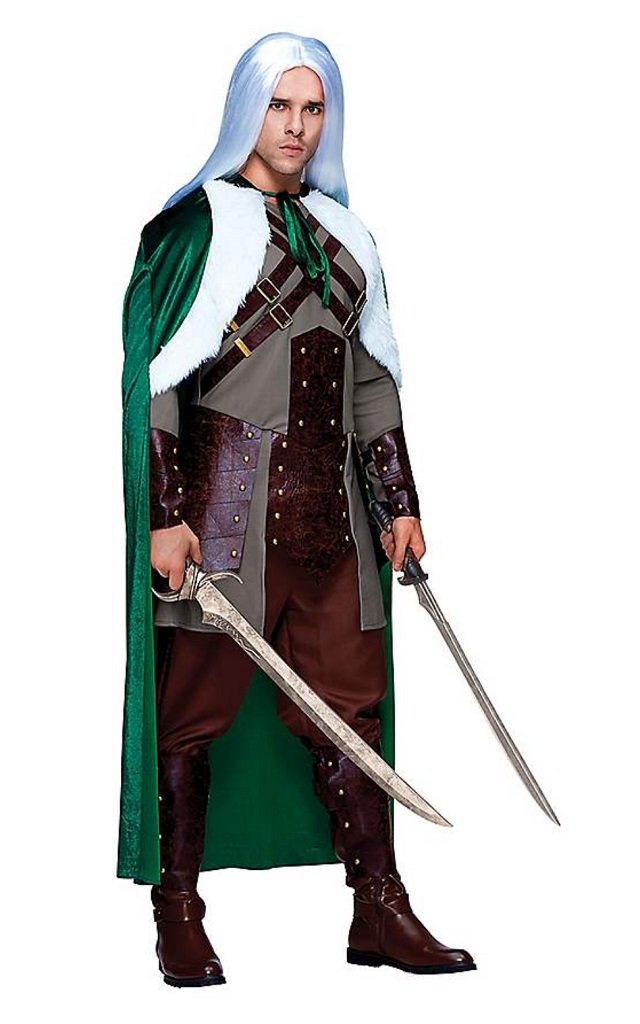 The best thing anyone can say about this costume is “at least they didn’t do blackface.” But that’s… not great? It’s kind of telling when you can’t even properly represent one of your most iconic characters in a cheap piece of Halloween memorabilia. And we all know the reason why. Here’s a look at Drizzt as he appears in literally every other piece of artwork.

And now here’s a description pulled straight from one of the novels.

His handsome features were sharp and well proportioned and, like other drow, Drizzt’s skin was black and his stark white hair was long, thick, and flowing. His eyes were a lavender hue (quite different from the drow race’s typical red, even when he used his infravision, which normally caused eyes to glow red) and seemed to glow fiercely when he was angry or determined. 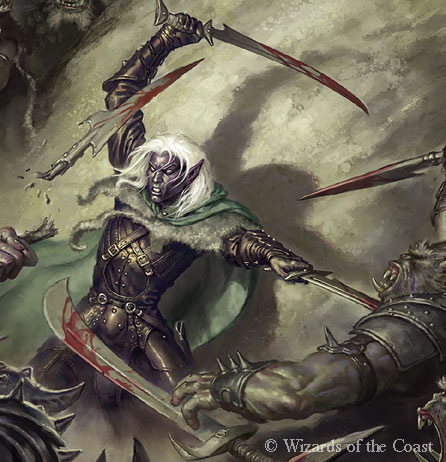 Let’s take another look at that costume. 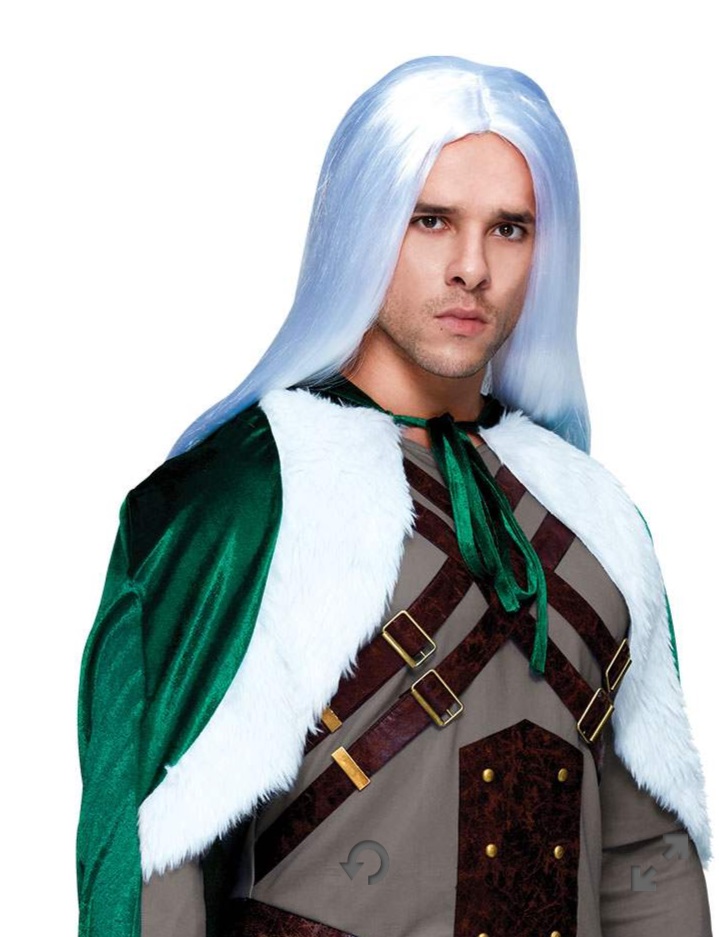 Stark white hair, green cloak, leather buckles crisscrossing around the chest. Look at that pointed thing with the brass buttons on the chest–that’s clearly a detail taken straight from the cover of the book. But uh. Dunno how to tell WotC or Spirit Halloween this, but it seems like you’re missing a crucial descriptor here.

So you have to ask, in what world does Drizzt show up to the costume party looking like he’s ready to show off Blue Steel, Le Tigre, or Magnum on everyone? Which brings us to the question of how do you portray a dark elf in the real world. I mean, it seems like for an elf with black skin, you could just hire a person with black skin. There are plenty. Spirit Halloween knows at least one. 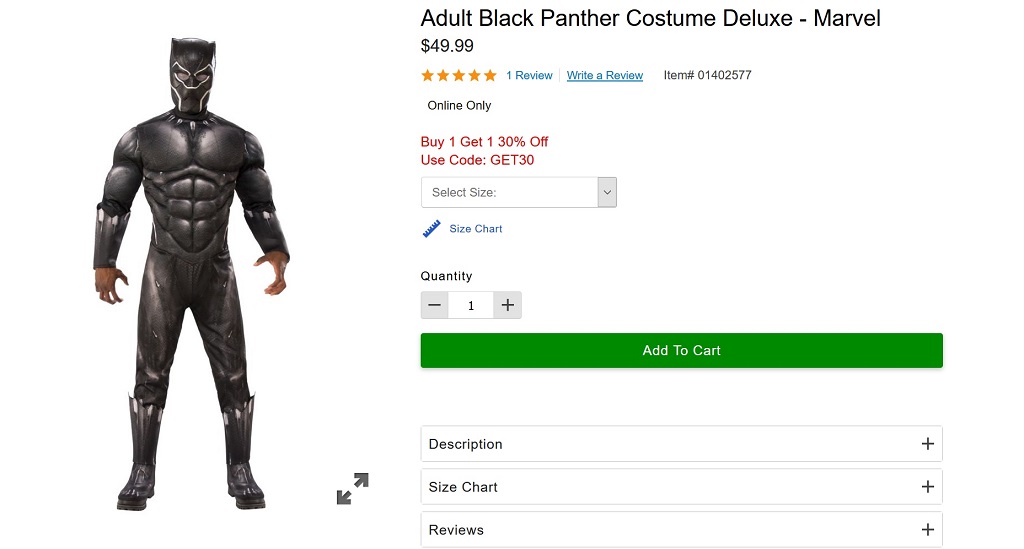 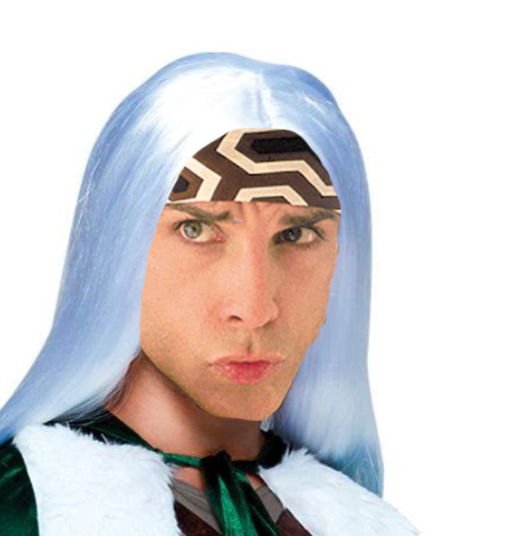 It’s an interesting choice with Drizzt specifically. Because he’s arguably one of a very few (but growing) characters that get spotlighted that aren’t white. Literally every D&D book is bristling with other options. Like Drizzt’s companions, which include Bruenor Battlehammer and Wulfgar. 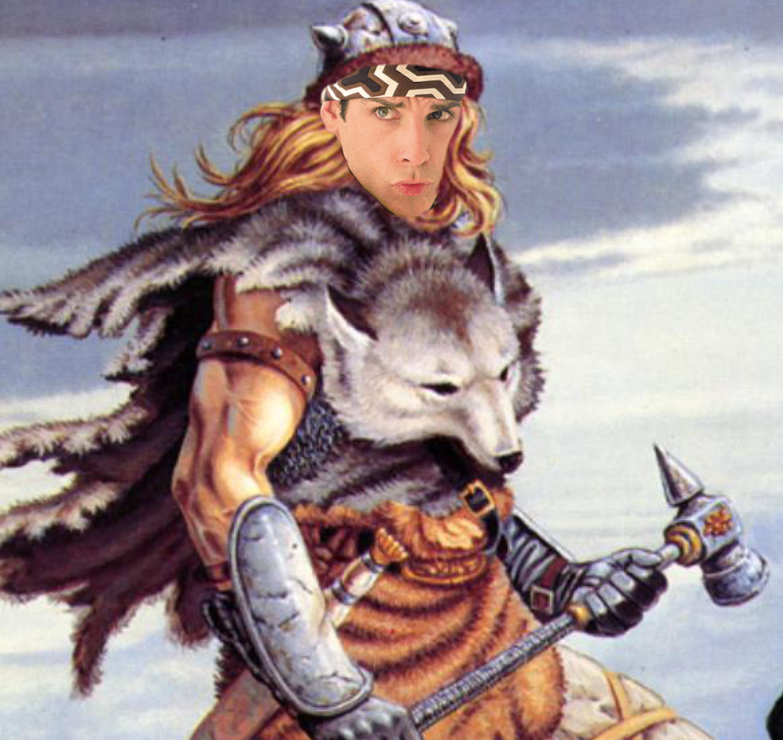 Do you want someone from the Forgotten Realms? How about Elminster or Volo or Mirt the Moneylender or Durnan, proprietor of the Yawning Portal or Piergeiron Paladinson, one of the Lords of Waterdeep, and the face of the Lords’ Alliance. 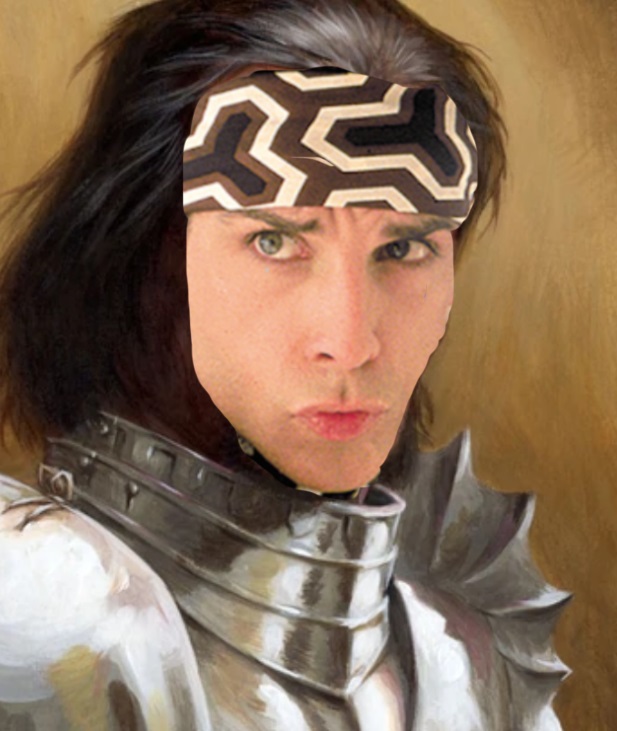 Or pick a character like Danilo Thann or one of the Companions of the Lance like Caramond or Tanis Half-Elven or Sturm Brightblade (who is probably better represented by a younger Tom Selleck).

But Drizzt is obviously one of the most popular characters in D&D. He’s a meme in his own right, and probably one of the few licensed WotC characters with any possible name recognition outside of D&D players. These days we’re in a position where people dress up as D&D characters that aren’t part of WotC’s official canon, thanks to shows like Critical Role or Adventure Zone. 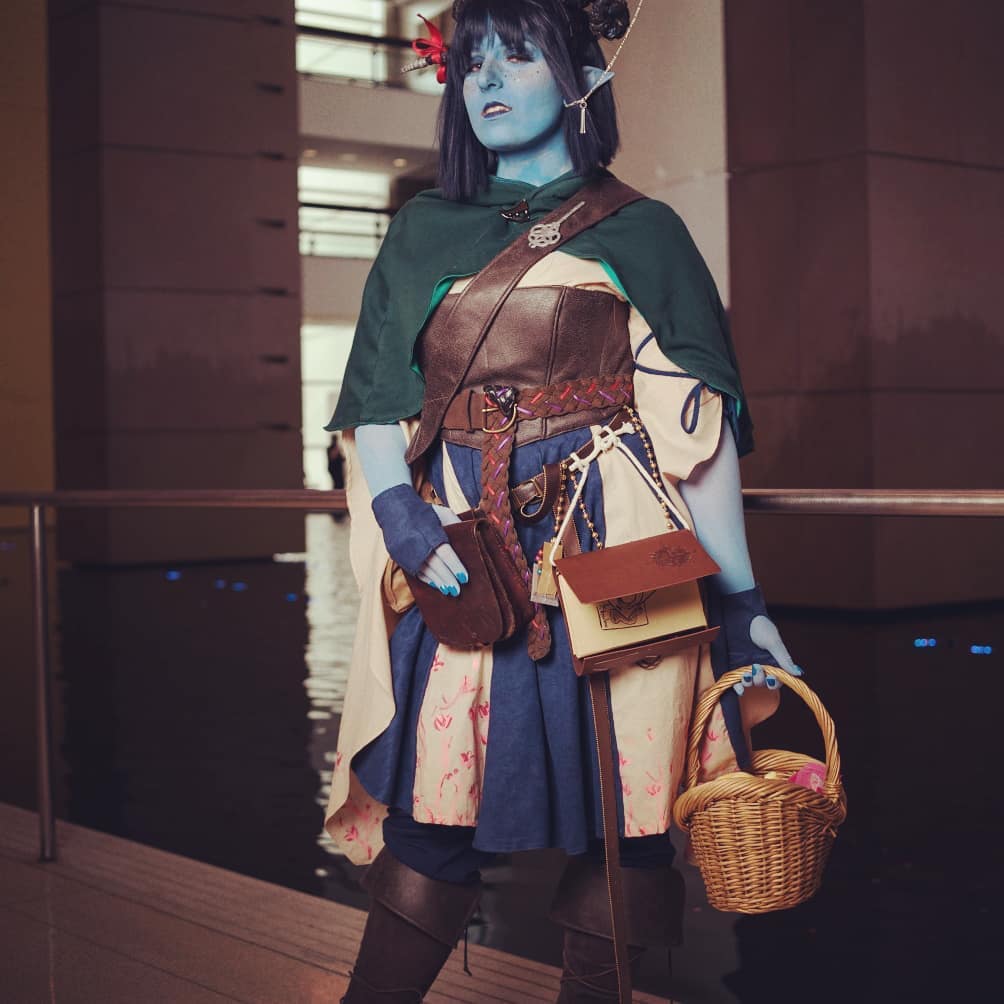 More people could tell you which character this represents on the first try than any other costume pictured here. Except for maybe Sexy Optimus Prime.

If the Drizzt costume is meant to appeal to people outside the core group of customers, then you have to ask, who’s going to dress up as “D&D?” And do they really know who Drizzt is? At any rate. The Halloween costume is available at Spirit Halloween right now, just be ready to explain to everyone that you’re not actually dressed up as Geralt from the Witcher. You’re the son of Zaknafein who taught you everything you know about swordplay and…where’d you go?

What do you think of Spirit’s offerings? Let us know in the comments!

Author: J.R. Zambrano
Bell of Lost Souls Staff Writer and DM, J.R. covers RPGs of all stripes and on occasion eats sandwiches. You can ask him about either at [email protected]
Advertisement
Dungeons & Dragons RPGs Toys
Advertisement

D&D: Magic Missile Mastery - How To Explode Anyone 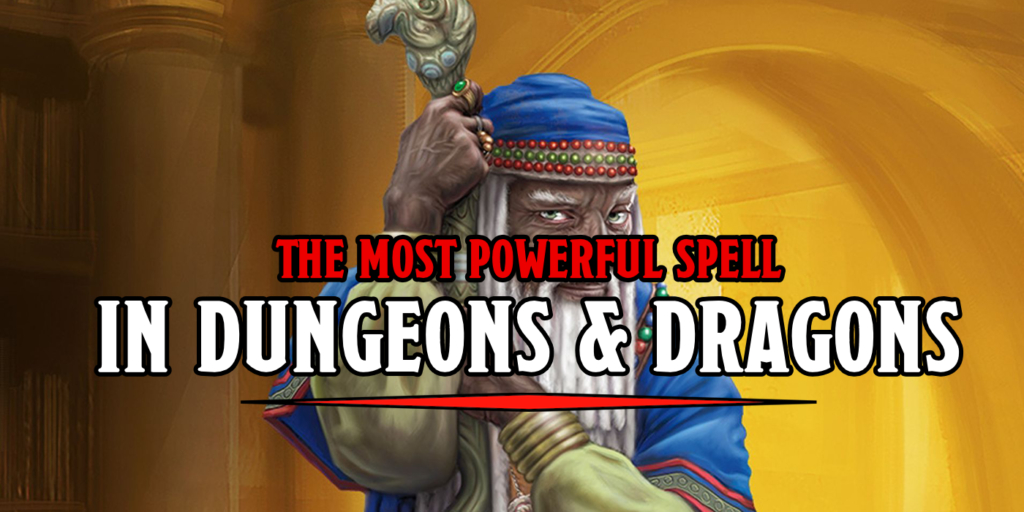