D&D: Make Friends And Influence Social Encounters With These Tricks 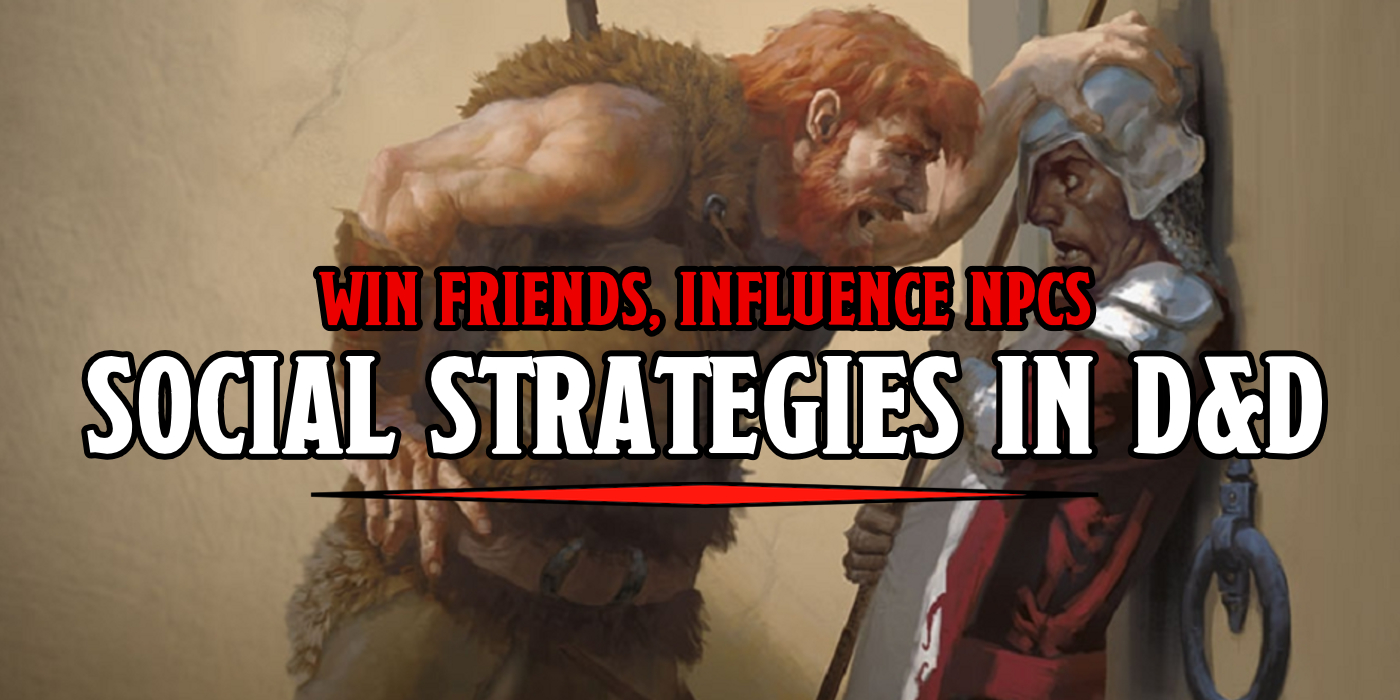 Roleplaying should be an important part of any D&D game, but it can be hard to stick the landing. Here are some ways you can make those moments pop.

D&D is propped up by three pillars. On the one side, there’s Combat, which is the most well-defined pillar of D&D’s ruleset. Even if you’re a new player, odds are good your DM can tell you how to make an attack or cast an attack spell. On another, there’s the crumbling pillar that is Exploration, which isn’t so much a pillar as it is a network of advice passed around tabletops and hex maps and people who love rolling extensively on environmental tables. But today we’re looking at the middle pillar of D&D: Roleplaying. Specifically, we’re talking about social interactions–after all, how your character interacts with the world is as much a part of who they are as what they think on the inside, and sometimes the way your character interacts with the world is by stabbing it. Today is all about stabbing, but with words.

The first thing to keep in mind is: social interaction is always happening. Whether between players and nonplayer characters, or players and players, if you’re sitting down at a table, there’s a chance for social interaction and roleplay. It doesn’t even have to be in the form of an in-depth conversation. Most of the game’s best moments can come from minor one-off statements, whether it’s banter between player characters, or one-liners traded with villains.

When characters can have fun with each other, everyone wins. And a big part of that comes down to giving your characters permission to have fun with each other. A big part of that is creating space for your players to figure out who their characters are without big consequences. Quiet moments or campfire scenes–“what are you gonna do with your share of the treasure” while trying to get the party talking, or maybe having an NPC prompt them to talk during combat might be the way to go.

Speaking of PC/NPC interactions though, that’s where the rules come in. This is where you run into some common sense explanations that seem to be at odds with the result of the rules. For instance, persuasion isn’t mind control, and just because someone succeeds on a deception check, or an insight check fails, it doesn’t mean you can’t be suspicious.

It’s incredibly entertaining to watch the narraative acrobatics a player might go through to bring metagame knowledge into the character’s in-game knowledge. Again, this can all lead to more fun for the game, and that seems to be at the heart of the social rules.

The dice are there to encourage memorable moments. A great performance might boost them, or a good skill might help when you don’t know what to say–but at the end of the day, this pillar is about showcasing the characters. It holds them up, and it’s one of the biggest ways to give your players agency and ownership of the game. Social encounters, especially ones that transition to other parts of the game, can be a great way to put the spotlight on the collaborative tale you’re all telling. These interactions make even the most strictly controlled prewritten adventure yours.