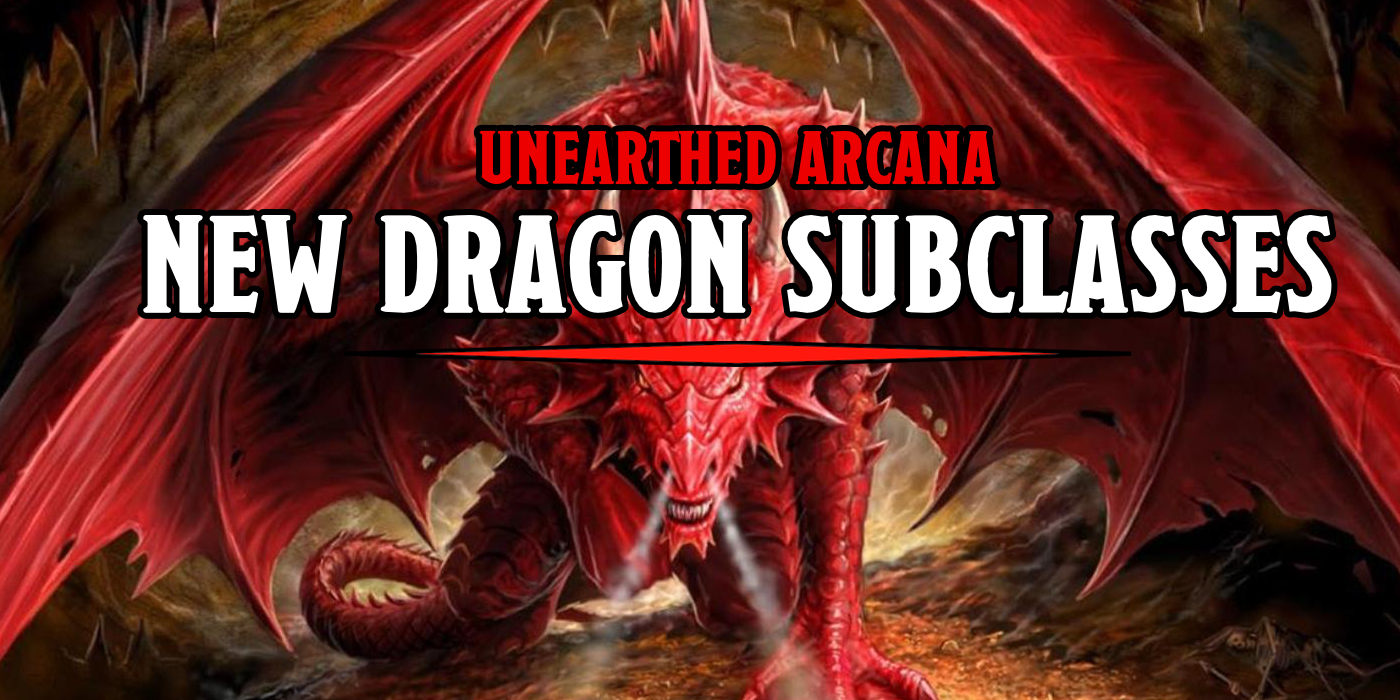 A new Unearthed Arcana reveals two new dragon-powered subclasses, one for monks and one for rangers–just what is WotC planning?

A new Unearthed Arcana has arrived, and with it two new subclasses, both of which are driven by dragons. Below you’ll find the Way of the Ascendant Dragon, which may be one of the best monk subclasses to come our way in a long while, and the Drakewarden ranger, which is the Beastmaster ranger you’ve always been dreaming of. But both of these subclasses are appearing much too late to be in the running for Tasha’s Cauldron of Everything–are these a hint of things to come? Is WotC working on a dragon book?

If not for the recent Dragonlance lawsuit, this might otherwise have been an indicator of some kind of Krynn-based book in the works. But who knows, perhaps there’s another dragon-themed tome in store. Maybe we’ll see another Draconomicon!

Either way, these new subclasses really hit the spot. Let’s dive right on in.

The Way of the Ascendant Dragon is a path for monks who revere the power and grandeur of dragons, Altering their own ki to resonate with draconic might, they can do all the things you want a monk to do–fight harder, fly through the air, and even buff your allies. You might have come to your dragon style through various means, as suggested by this handy table: 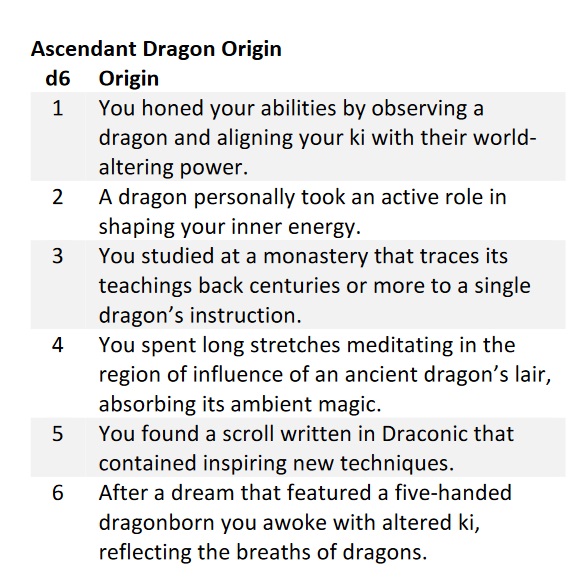 But whatever the origin, the benefits are many. At the heart of the subclass are two new ways of using your ki, both of which you unlock at 3rd level. Draconic Disciple is an interesting one because it just flat-out gives you three abilities:

That last one is a handy way to get around resistances to physical damage, or to sidestep immunities without having to get to 6th level when your unarmed strikes technically count as magical.

Breath of the Dragon rounds out the 3rd level powerhouse by giving you the ability to take the attack action and replace one of your attacks with an elemental burst that is either a 20-foot cone or 30-foot line (your choice). Every creature in the area must save against your ki save DC or take damage equal to two rolls of your Martial Arts die on a failure (half on a successful save). At 11th level, it becomes 3x Martial Arts die. You can use it for free a number of times equal to your proficiency bonus, and can spend ki afterwards to regain a use.

It’s great to see them experimenting with ways to use the ki abilities of the monk. This stacks with flurry of blows, so you’re still able to attack a ton–honestly this feels like something the Way of Four elements monk should have had all along. And it just keeps getting better.

At 6th level Wings Unfurled allows you to gain a flying speed while you use Step of the Wind, again, up to your proficiency bonus times per day before you have to spend ki. This is the ki efficiency monks have dreamed of. You can pretty much always be doing something cool and still have ki leftover for flurries of blows and stunning fists.

Aspect of the Wyrm makes you your parties best friend at 11th level, when you gain the ability to use a bonus action to create a 30-foot aura of draconic power (acid, cold, fire, lightning, or poison) with multiple effects:

The first use of this is free, and afterwards it’s 4 ki points.

Finally, Ascendant Aspect caps off the monk, granting you blindsight out to 30 feet, an explosive rider to your Aspect of the Wyrm ability, and your elemental energy lingers after your Breath of the Dragon hits, repeating its damage until an affected creature successfully saves against it.

This is such a solid class. I can’t wait to play one. It’s everything monks feel like they’ve wanted to be since day one. You have ki efficiency but can still do cool things throughout the adventuring day. There’s never a moment where you have to just save your energy for yet another stunning fist. There’s always something fun and exciting to do.

The Drakewarden ranger, similarly, is the Beastmaster you’ve been dreaming of. These rangers use their magical connection with nature to bond with a drake, allowing the pair to share in the awe-inspiring power wielded by dragons. As with the monk, there’s a list of ways you might have bonded with a drake. 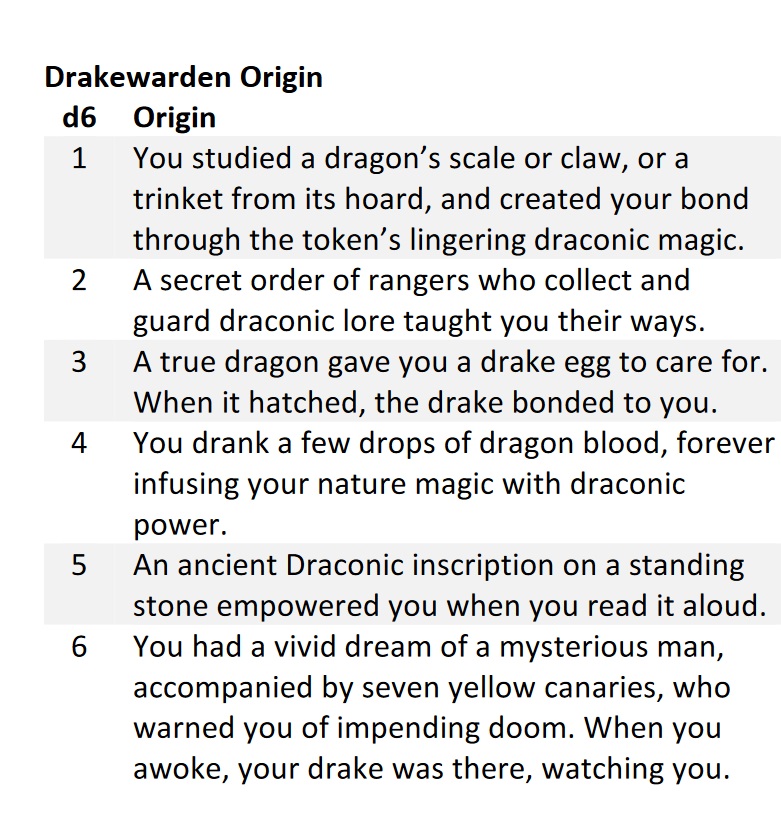 And at 3rd level you get your classes main feature, Drake Companion, which functions much like the new pet rules we’ve seen in Unearthed Arcanas past, and will soon see in Tasha’s Cauldron of Everything. Your drake has its own special stat block, though you determine its appearance. In combat, the drake goes immediately after you , and can move and use its reaction independently–you have to use a bonus action to direct it to take an action besides Dodge, but that’s still much easier on the ol’ action economy. 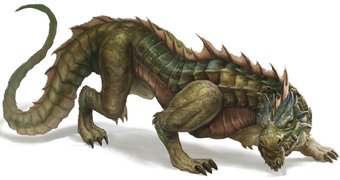 Interestingly enough, you have to summon the drake, it’s not just always hanging out with you–you summon it as an action and it sticks around for a number of hours equal to your proficiency bonus. You can summon it once per long rest for free, and after that, you have to expend a spell slot of 1st level or higher. So it still costs you to use your drake for more than a few hours each day, but not by much.

Your drake will largely give you an extra 1d6+proficiency bonus with its bonus action, and when you deal damage, your drake can infuse your attack with an extra 1d6 damage with its reaction (or someone else’s attack if you’re feeling generous).

You also gain a Draconic Gift, which grants you the ability to speak, read, and write Draconic if you can’t already, as well as the Thaumaturgy cantrip.

At 7th level, Bond of Fang and Scale empowers both you and your drake whenever you summon them, granting both of you many abilities:

At 11th level Drake’s Breath lets you or your drake do a single 6d6 area attack as a 30ft cone, and at 15th level, that damage scales up to 8d6, making it as good as a 3rd level fireball.

Finally, at 15th level, your baby drake grows up thanks to your Perfected Bond. When you summon it, the drake is Large, dealing yet another extra 1d6 of damage with its bite (3d6 + proficiency bonus), and you and your drake can use your reactions to give each other resistance to damage when either of you would take damage.

All in all these are some solid subclasses. I’m very curious to see if there are more dragon-themed classes in the works, but I suppose we’ll wait and see.

What do you think of these new subclasses? Let us know in the comments!