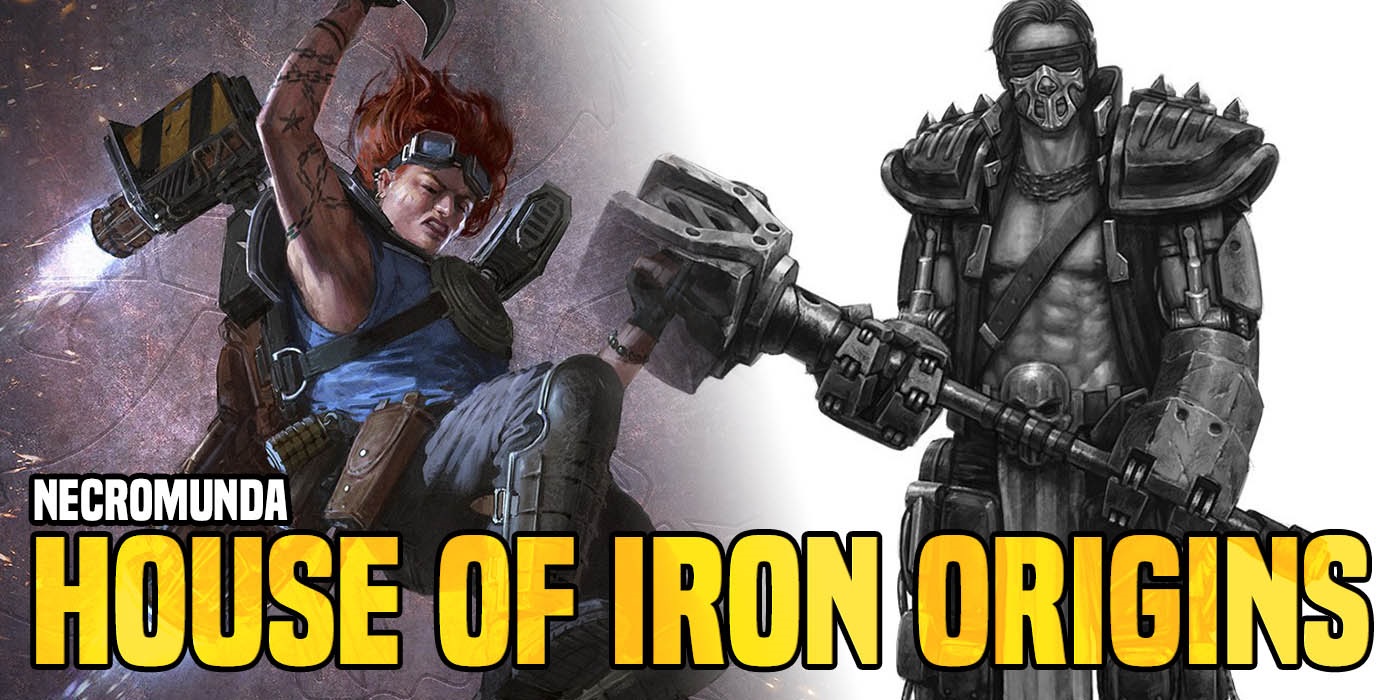 Necromunda goes full “Road Warrior” with the origins of the of the Orlocks in the new House of Iron Book.

I got my hands on the new House of Iron book for Necromunda and I’ve finally had some time to read it since this Overview video:

I have learned SO much more. For starters, the Orlocks are actually come from 4 main family/clans – the Orlocks, the Kamunds, the Cinderjacks, and the Merdenas. The largest and most influential clan within the House are the Orlocks – while the other 3 have (mostly) found their place within the larger house. Also within the House are smaller families that owe allegiance to them. These families come from either Duster Clans (folks who live out in the Ash Wastes) or Drudges (essentially the working class). Why do all these families work together and for the House of Iron? It all goes back to a scavenger with a dream – Olandus Orlock.

(note: House with a capital “H” will refer to the Orlock House as a whole aka – The House of Iron) 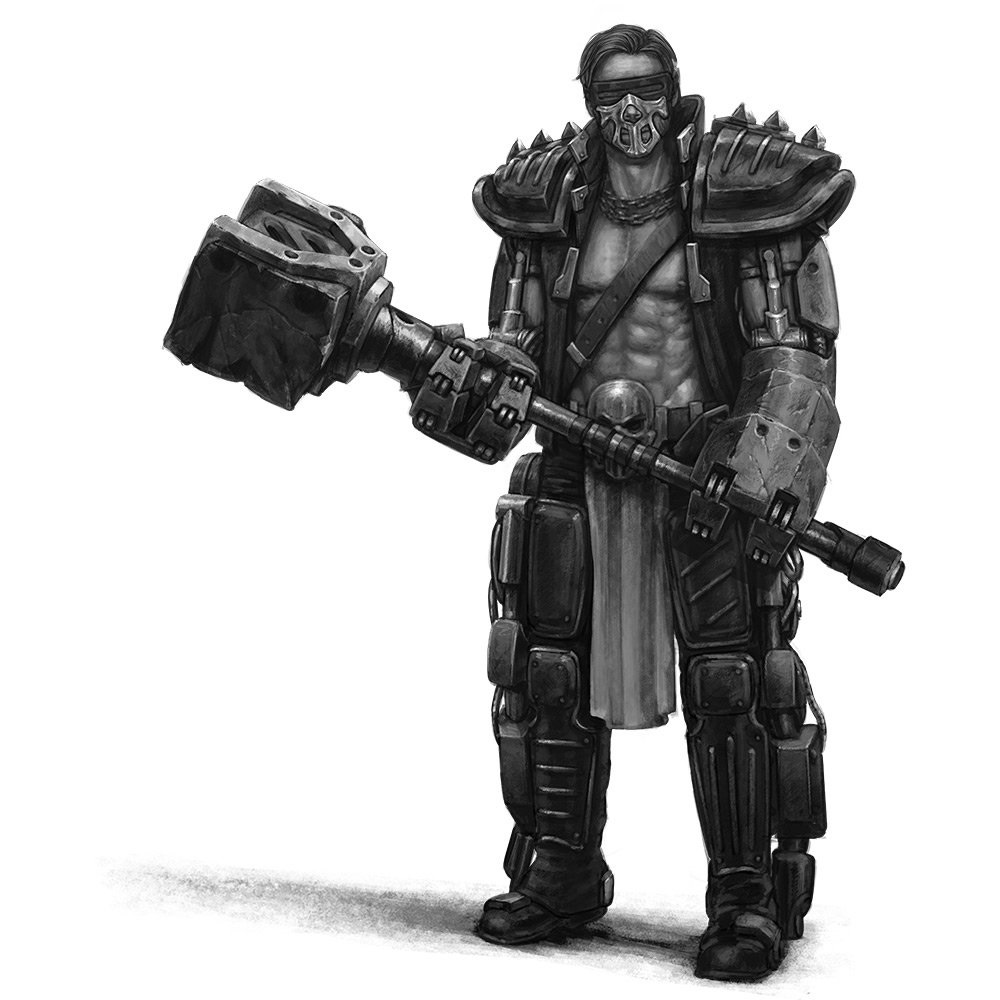 House Orlock comes from the ash and dust of the toxic wasteland outside of the Hives. Olandus Orlock stumbled upon the find of a lifetime – an ancient void ship that had been buried for a millennia. Realizing what he had found, he kept the find a secret and started to salvage everything he could. Instead of spending all his profits in the drinking holes of the Hive he set out to create a lasting dynasty on the planet of Necromunda.

Olandus knew that while the resources he had would get him started he would need allies. So he took the bold step of gathering what would become the first families of House Orlock – the Kamunds of Poison Ridge, the Cinderjacks of Mutietown, and the Merdenas of the Arcos Run. This new alliance with their secret stash would strike out against their main enemy: House Orlund.

Another House, Orlund was in control of the most profitable mining operation in the wastes. And that was the new House Orlock’s target. Instead of attacking the mines directly the new Orlocks started a Raiding War that would put pressure on the Orlunds. On Necromunda, those ever increasing quotas weren’t going to fill themselves and the added pressure of these transportation raids kicked off a chain of events that would bring down House Orlund altogether. 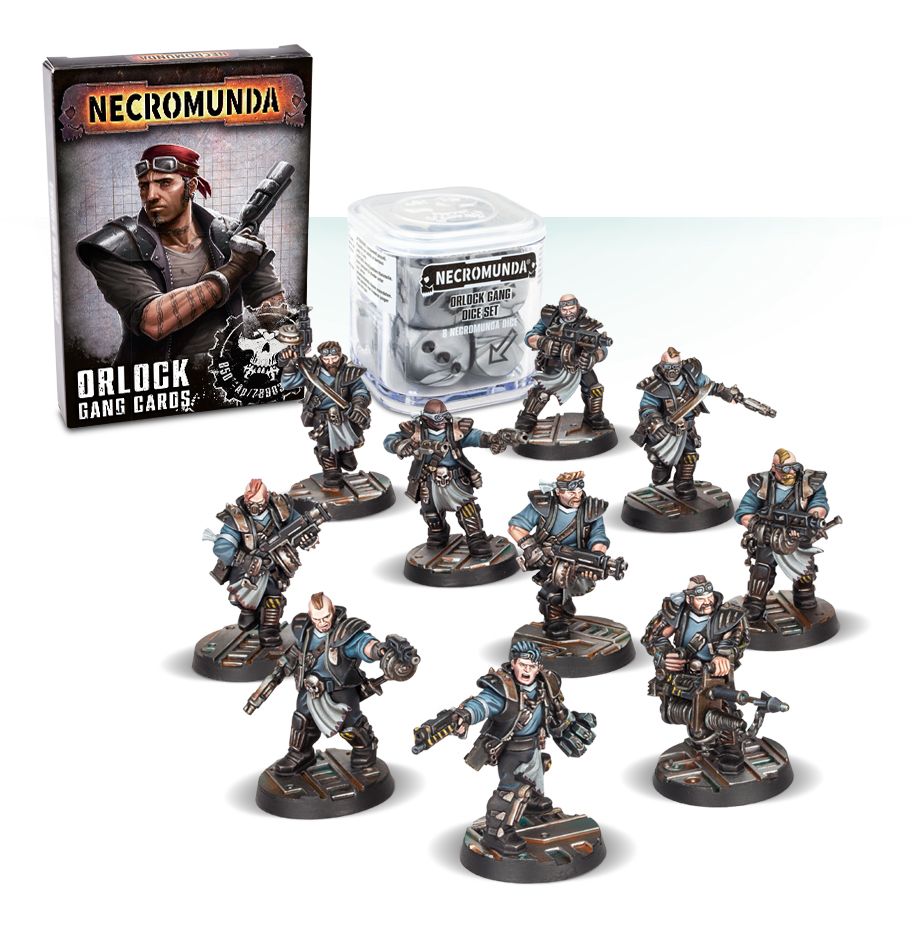 These Road Wars lasted for almost a century and severely weakened House Orlund. It got so bad that Orlund reached out to the Imperial House of Lord Helmawr for help. However, the Orlocks knew their enemy and made sure the Imperial House and the Merchant Guild were still getting their cut. So, Lord Helmawr turned a blind eye and doomed Orlund. The other Houses in the Hive saw their chance and started to put pressure on House Orlund from inside the Hives, too. With the Orlock Raiders controlling the roads, and the internal politics of the Hive attacking Orlund as well, they were not long for Necromunda.

The final nail in the coffin was the betrayal of House Orlund by Kaylana Orlund. She would go on to wed Kavar Orlock (a descendant of Olandus) and seal the fate of the House of Orlund. 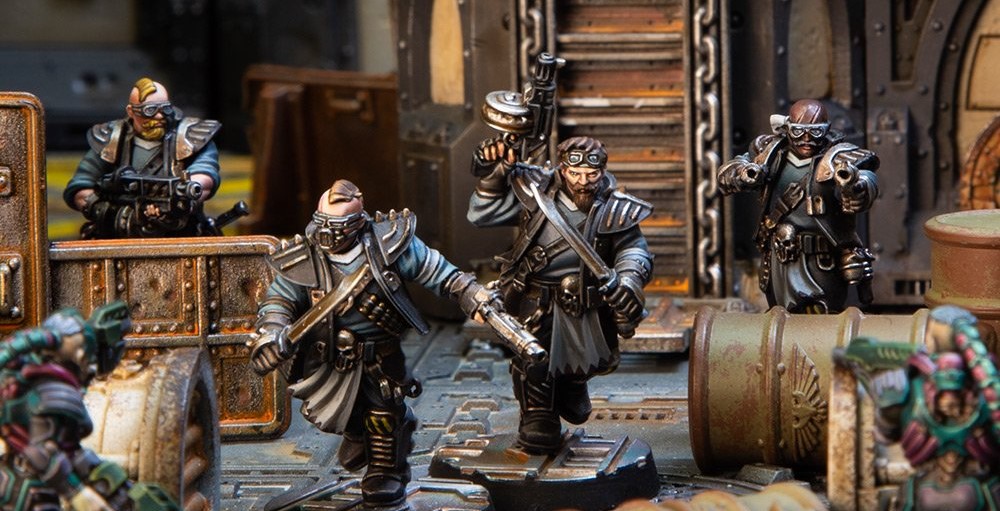 There is so much MORE to the story of the House of Iron. They go on to have their own civil war and internal rebellions. But even those events don’t break them. In fact, House Orlock uses those moments to be forged in the conflict and come out stronger than before. Eventually, the descendants of Olandus will create the creed of the House of Iron: “Gang before House, House before the rest.”

This new “Code of Iron” would guide them to prosperity and even give hope to those who lived out in the ash wastes – because if you’re a member of House Orlock, you’ve got a chance to rise up and become more…at least that’s what the Nobles keep telling the Dredges.

It took House Orlock around 3 millennia to take and hold their power. They did that by attacking and taking over the roads in the wasteland and then taking over the mining operations of their rivals. Smart politicking, alliances, pay-offs, and a healthy dose of violence ensured their lasting dynasty. They are one of the few Houses that are active outside the “safety” of the Hives. They still maintain those transportation contracts and have become one of the most influential Houses because of them.

Now, I’m not saying the Orlocks outside the hive are inspired by Mad Max…but it would quite a fitting tribute. The leathers, the weapons, and even the idea of massive rolling battles on the backs of ash crawlers. There are still nomads out there that would attack caravans and there are plenty of other threats to their shipping empire.

This got my hobby-brain going. How would the Orlocks maintain their transportation empire? With Vehicles. What kind of Vehicles? Refitted “Civilian” Imperial ones. Where can I get those? From another faction that also uses Refitted Civilian Imperial Vehicles” – the Genestealer Cults. 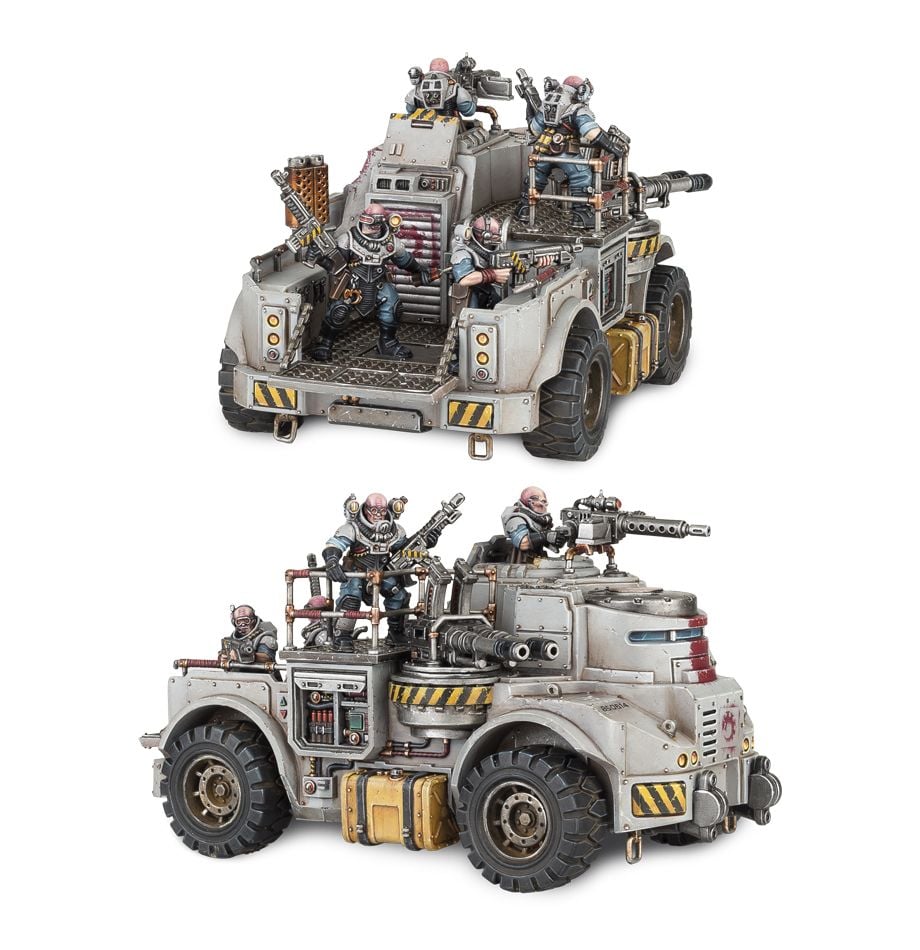 Well, I knew what I had to do. It’s an easy enough conversion – swap out the GSC models with Orlocks and maybe add a weapon more fitting: 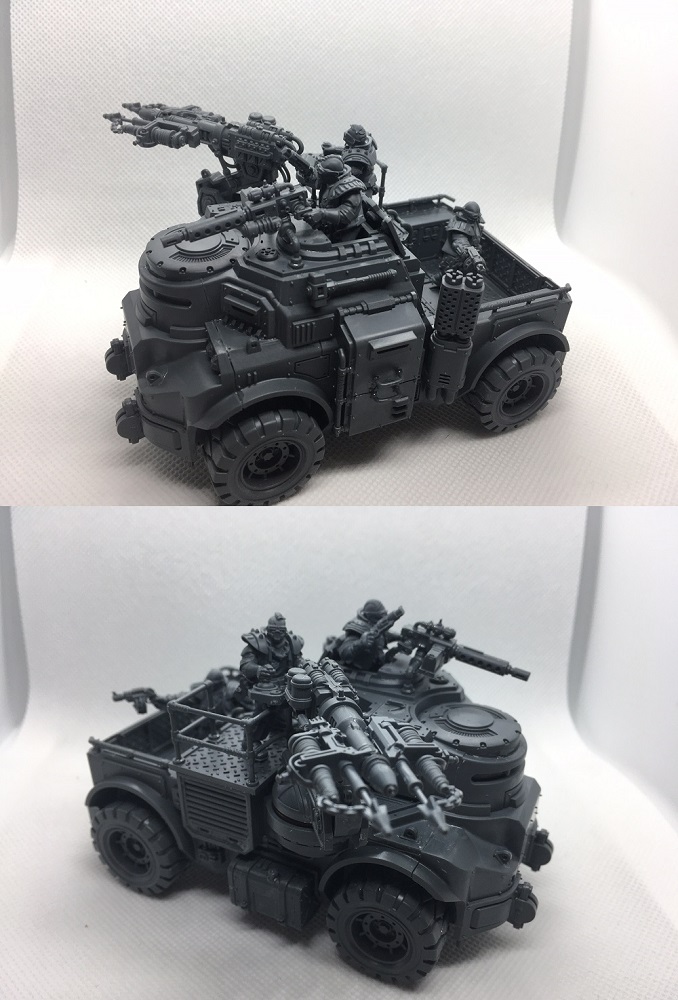 There is still room in the truck bed for another Orlock Ganger I just didn’t want to crowd it out before I paint it. The only one that’s glued down is the ganger using the pintle mounted stubber. I might even go back in and add some “Road Warrior” Damage. But now I also want to get a few more GSC vehicles – particularly an Achilles Ridgerunner – and convert that up as an Orlock Interceptor.

Is this usable in game? Not in Necromunda! …Yet. But I don’t really mind. Sometimes when you get a hobby conversion idea, you just hafta do it. I might end up with an whole fleet of Orlock vehicles to patrol the ash wastes by the time I’m done… 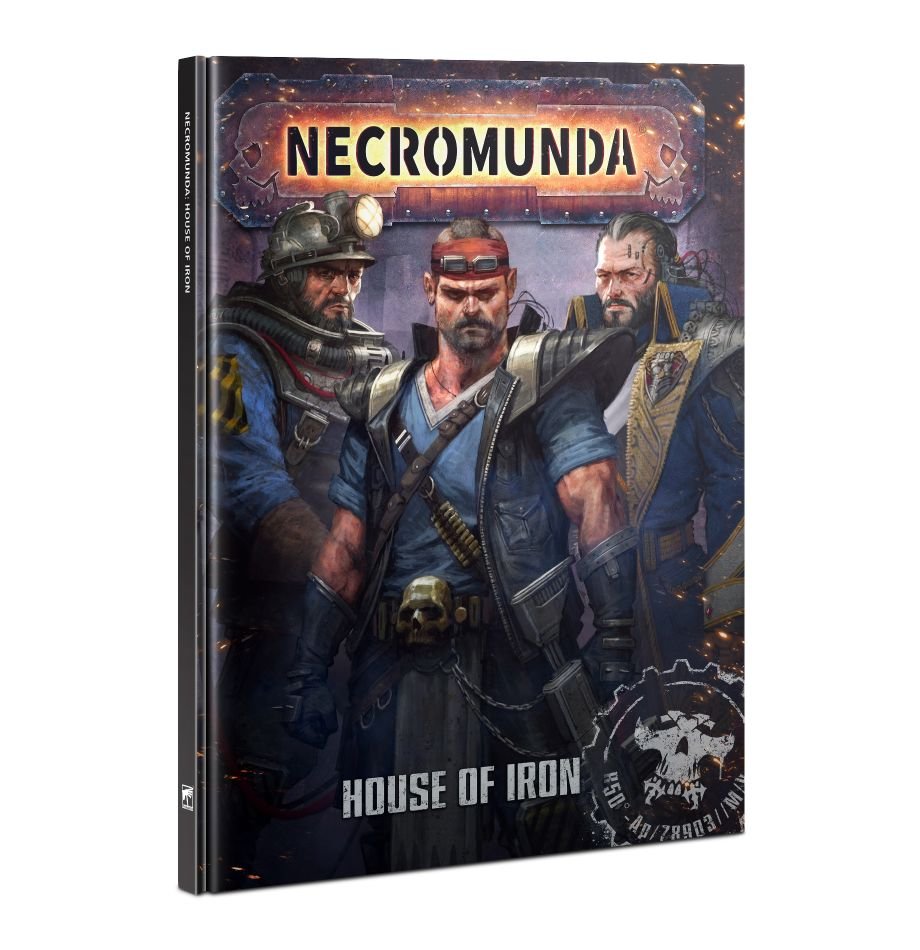 If you’re interested in learning more about the Orlocks then pick up the House of Iron book – up for pre-order now!

Author: Adam Harrison
Writer, Editor, Texas Native, and Austinite for 15+ years, Adam covers all things Tabletop Gaming. Which includes Warhammer 40,000, Age of Sigmar, D&D, Board Games and everything else that involves dice, boards, cards and a table. A hobbyist, player, and collector of miniatures and games, Adam's current obsession are his Death Armies for Age of Sigmar, his Blood Angels and Tyranids for 40k, and his ever growing Arkham Horror: The Card Game Collection.
Advertisement
Games Workshop Lore Miniatures Necromunda Warhammer 40k
Advertisement