Warhammer 40K: Up Close With The Void Dragon C’tan Shard 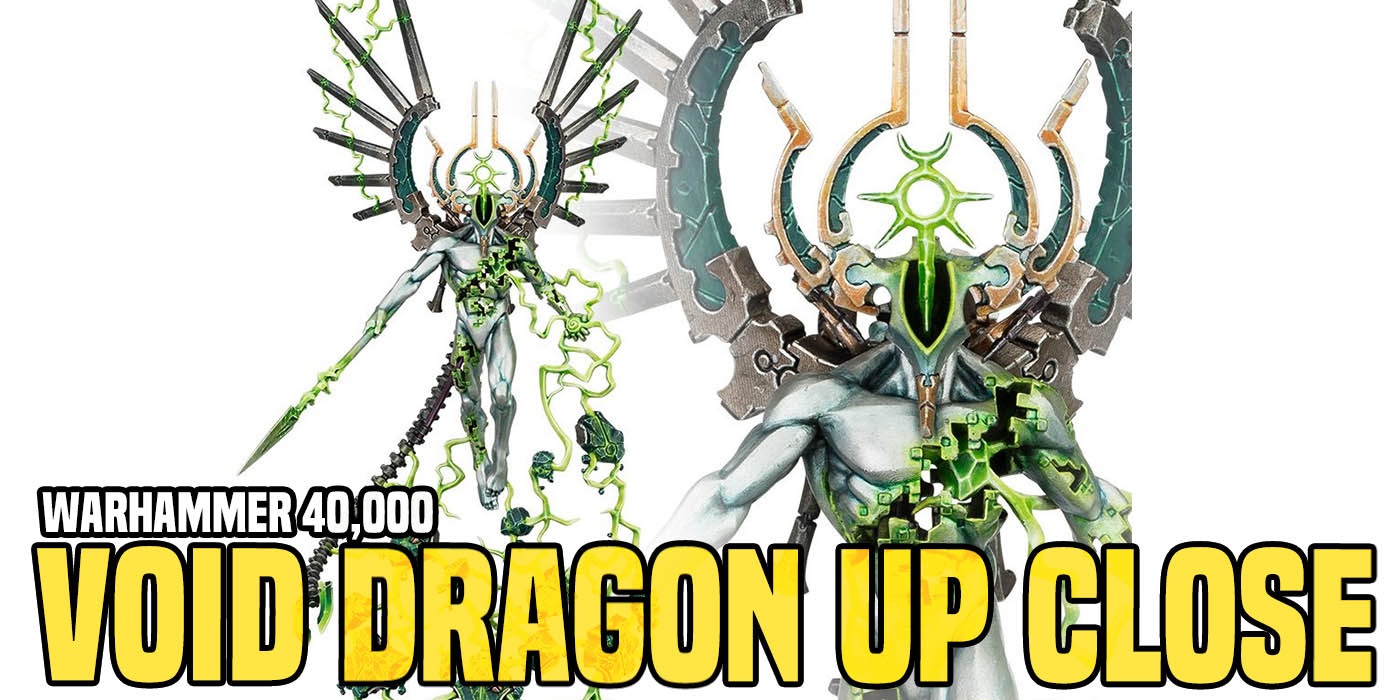 Games Workshop is taking a closer look at the new Void Dragon C’tan Shard model – behold the Star God in all its glory!

So the Silent King was a pretty great kit. It looks amazing and while it might have broken our own Goatboy, I had fun building it! Really, between the Silent King and the Void Dragon, I’m not sure which kit I like more. I’m reserving final judgement until after I get to see the Void Dragon in person – but these new pictures from GW do shed some light on things.

“The C’tan Shards of the Void Dragon are the most technologically advanced of their kind, able to harness the power of unrefined noctilith – or ‘blackstone’, as it is known in the Imperium. They hover across the battlefield held aloft by eldritch blackstone energy in its purest form. This energy runs across and throughout their necrodermis bodies, creating a constantly shifting, digitally pixelated appearance to their physical forms – as if they exist in some sort of quantum state between realities.” 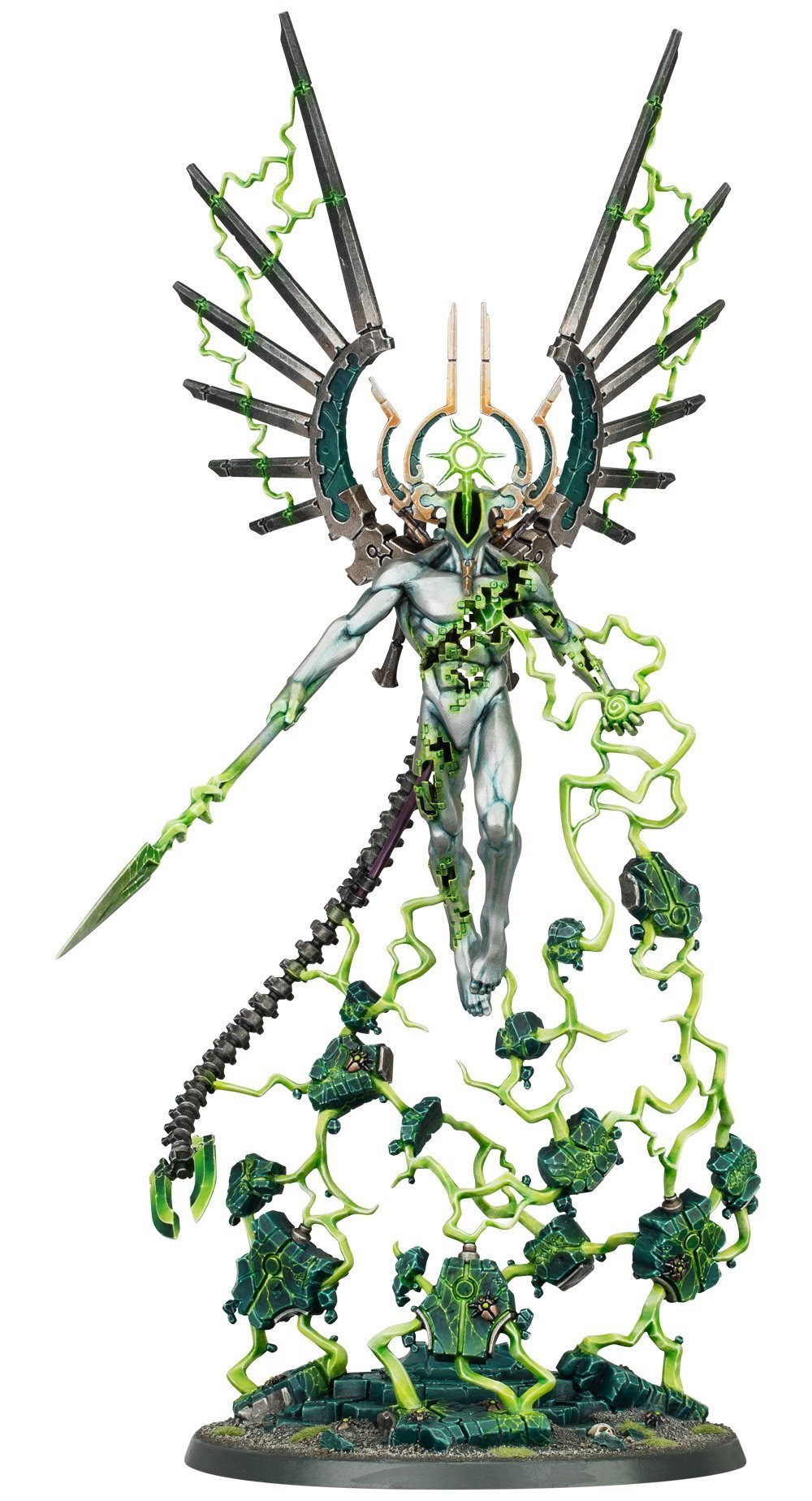 Techno-babble aside, this model looks fantastic! Having built the Celestant Prime and Nagash, I’m not super worried about building this model either. GW is getting pretty good at those weird, floaty/spindley model bases. While it might look precarious I’m betting that it’s going to end up being a lot more stable than you might realize. The Silent King certainly was. 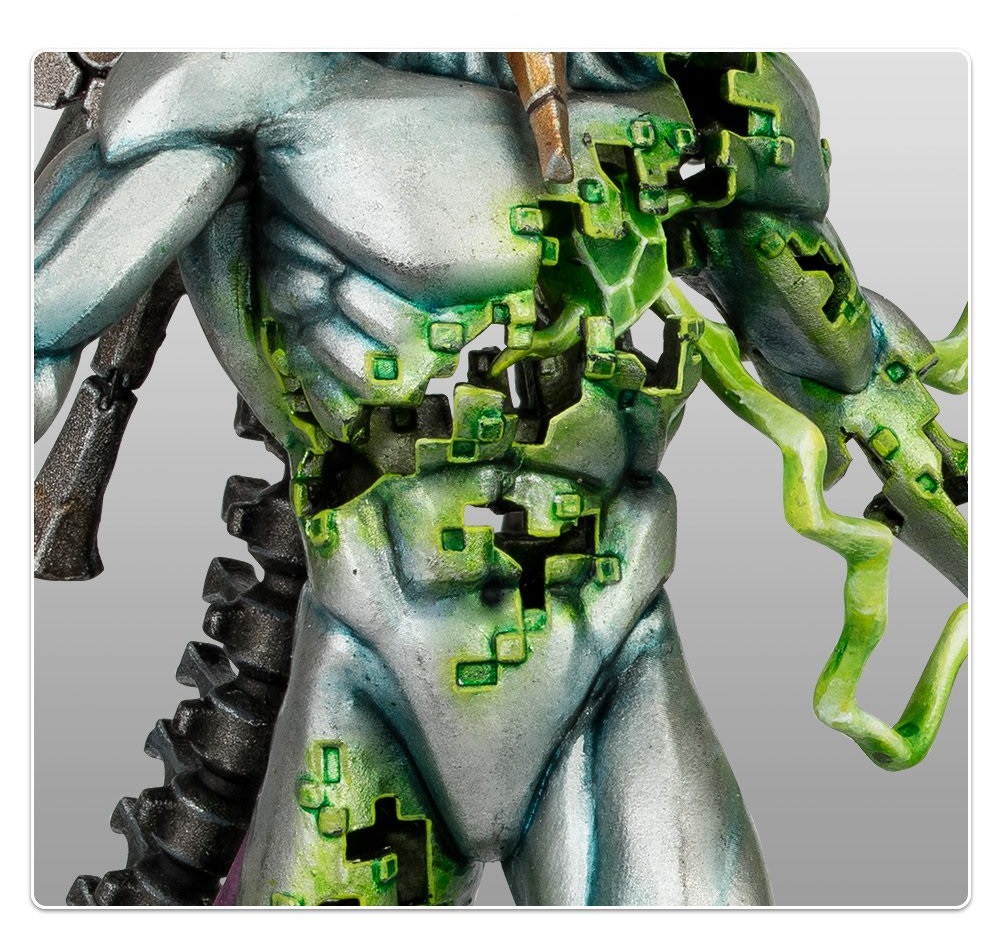 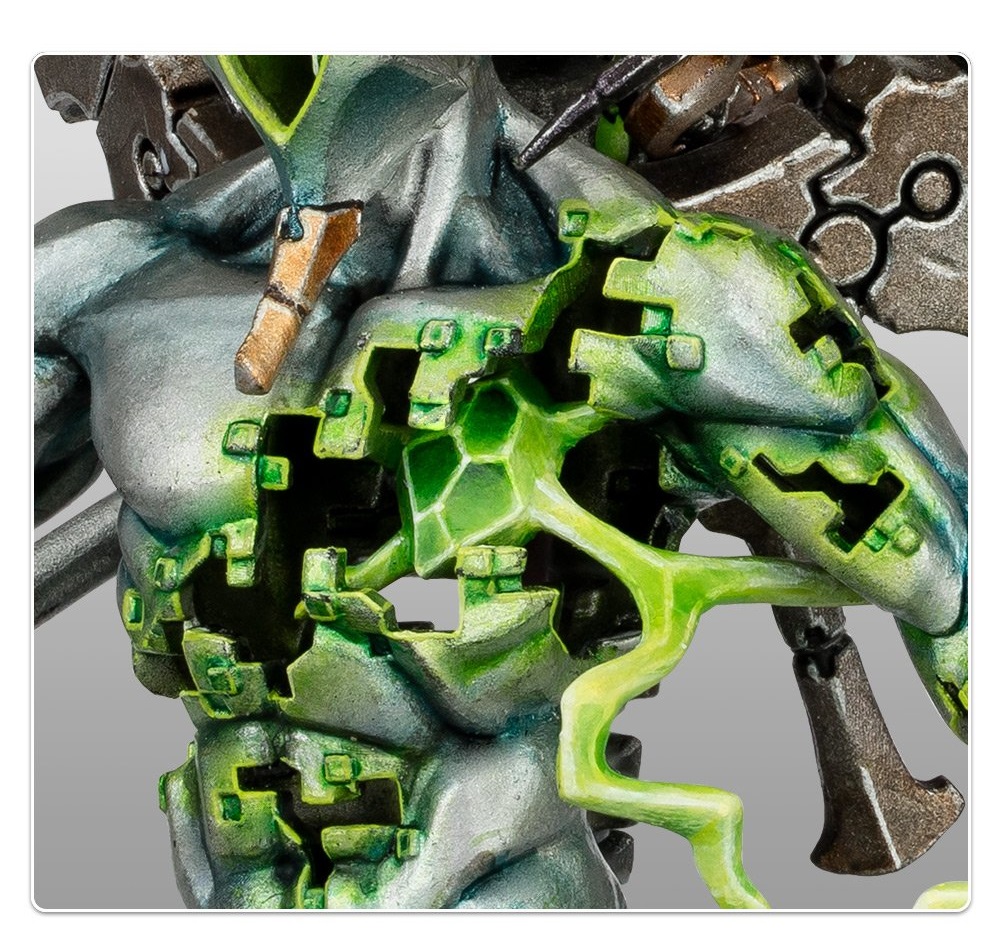 I’m really liking the “digitized” effects that the Necrons have going on with these new models. Also, I didn’t realize that the Void Dragon’s shard was also the exposed “heart” of the model either. Really nice touch. 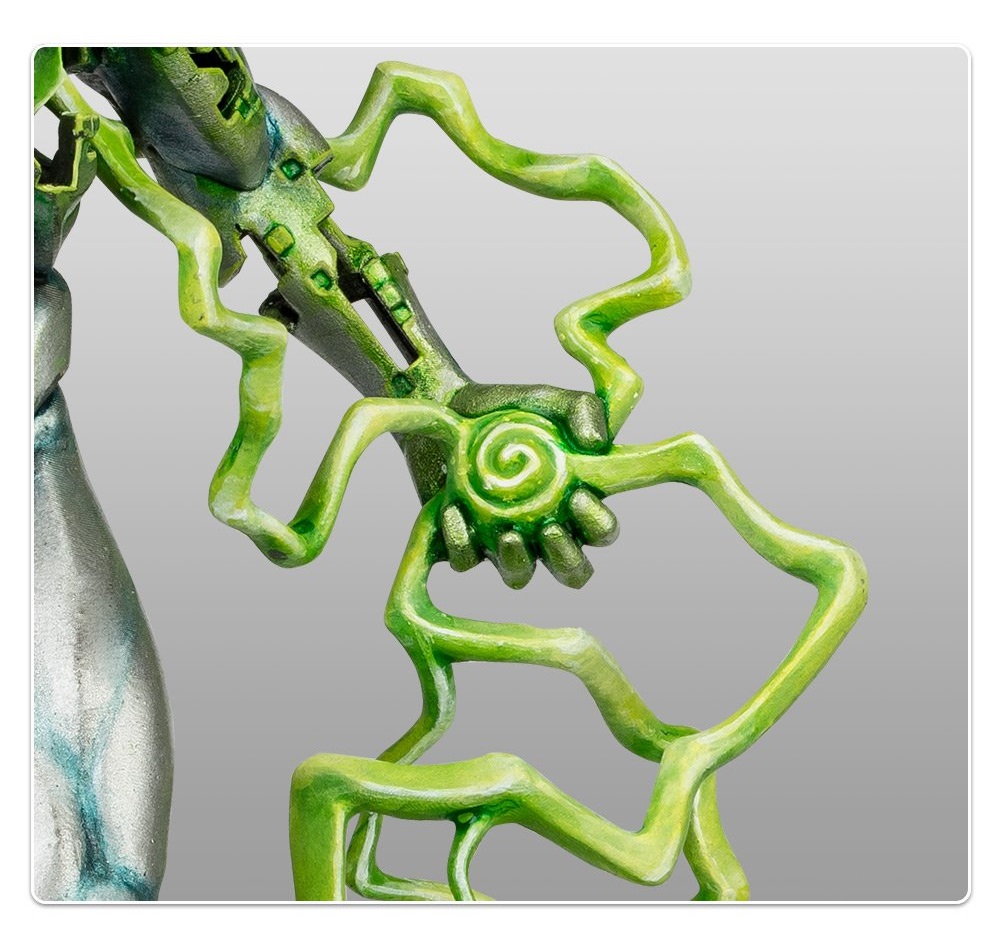 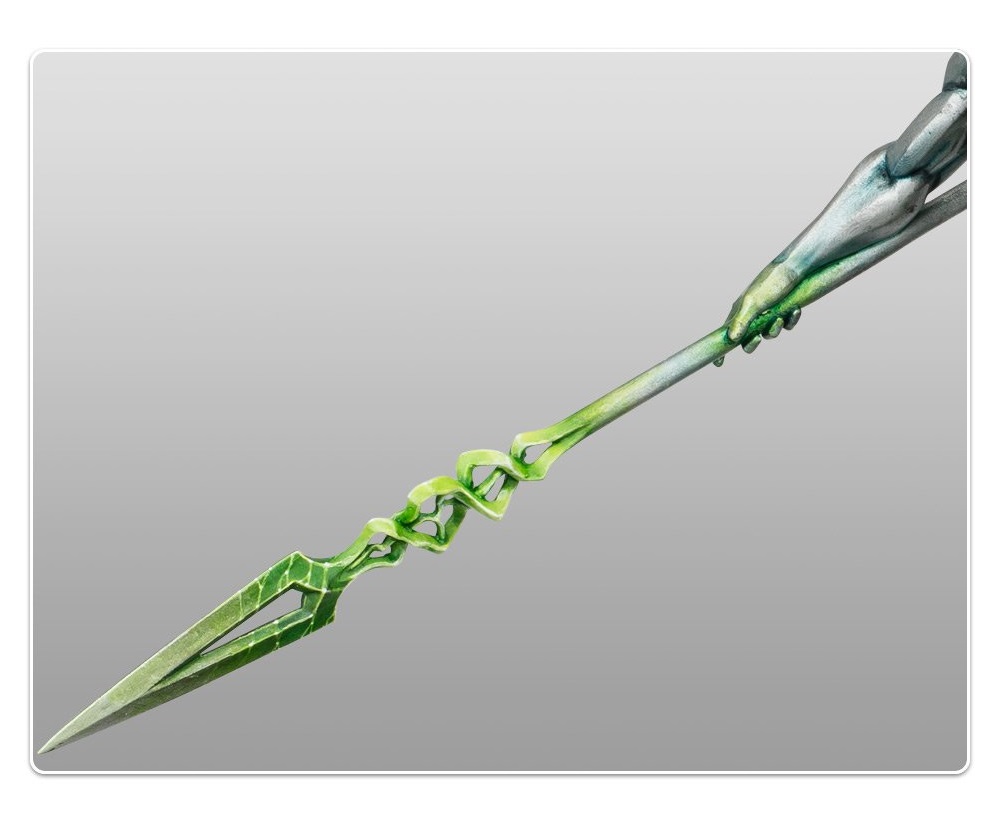 In it’s hands are a spear and a “swirling orb of energy” – both look like they are manifested directly from the C’tan’s power and they don’t look very pleasant to be on the receiving end of either. 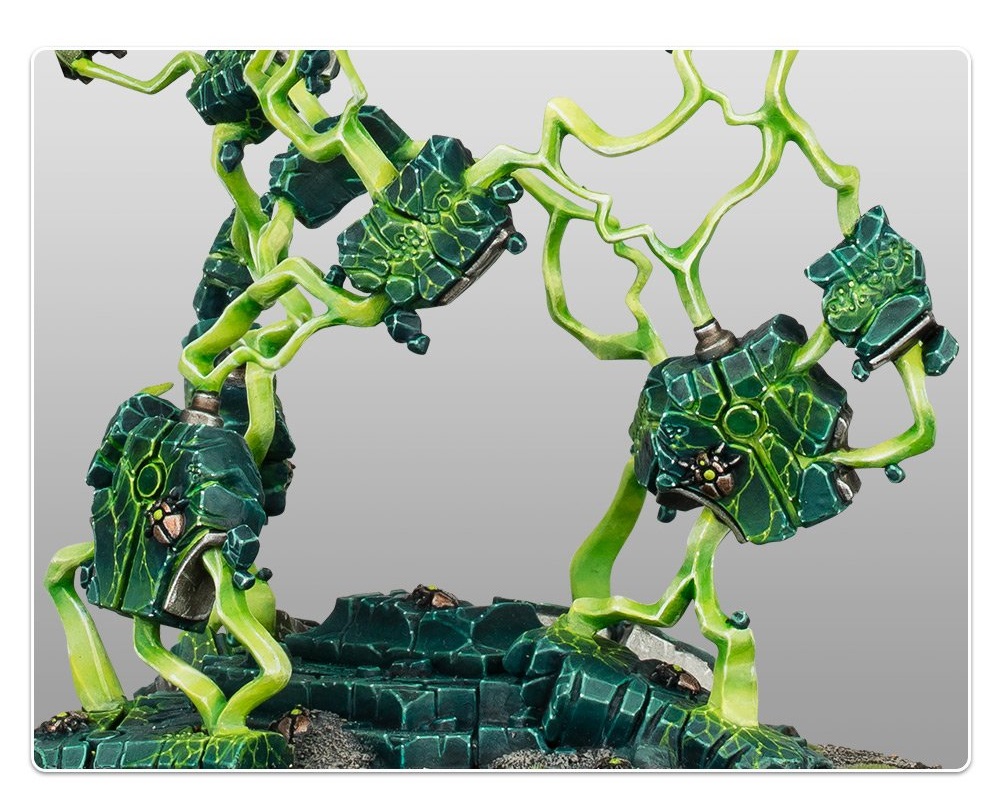 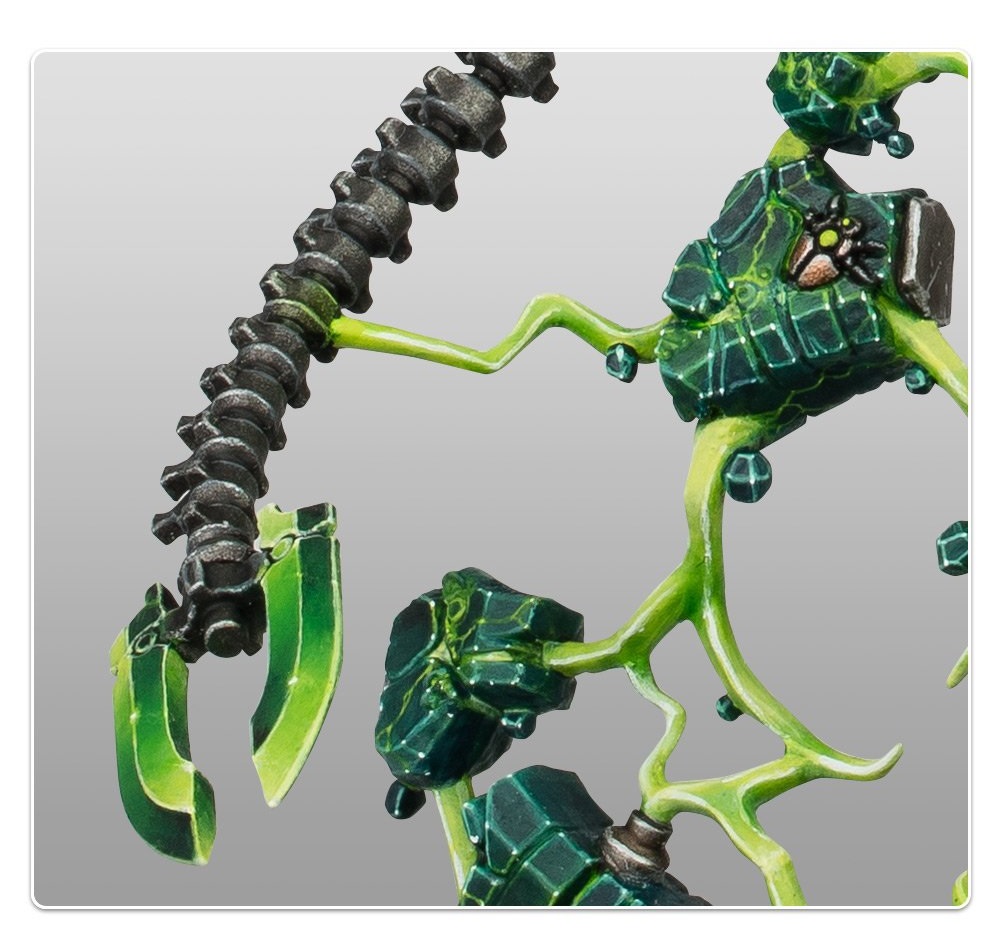 Here we get a look at some of the cracked Blackstone that makes up the hovering base. I really like this effect and think that it actually provides a ton of connection points on the model for a solid foundation. 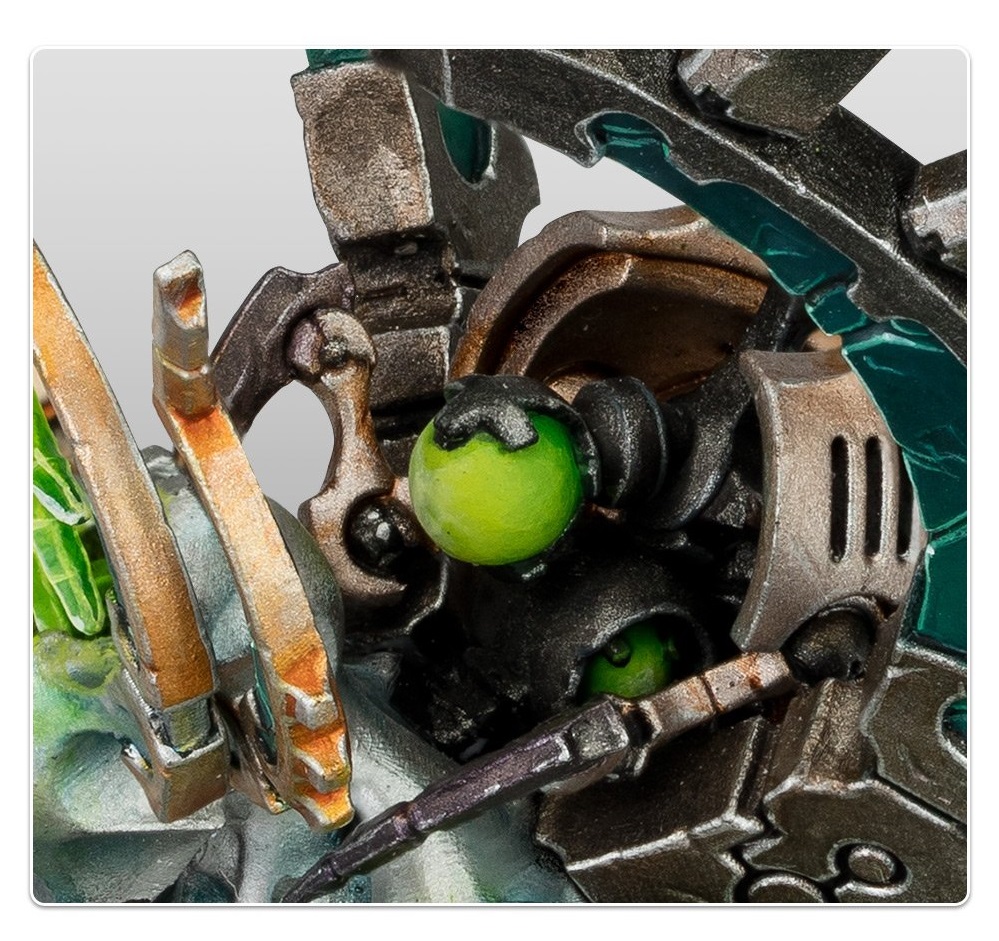 “The C’tan Shard is actually being controlled by a Canoptek construct attached to its back. Its claws rise above its shoulders, as well as threateningly around the C’tan’s neck, ready to strike should the essence of the raging star god within seek to escape its captivity.”

Lest you thought the C’tan was fighting with the Necrons willingly, here’s some evidence to the contrary. That Canoptek Construct is ready to terminate the C’tan if it beings to act-up. It’s a nice detail for sure. 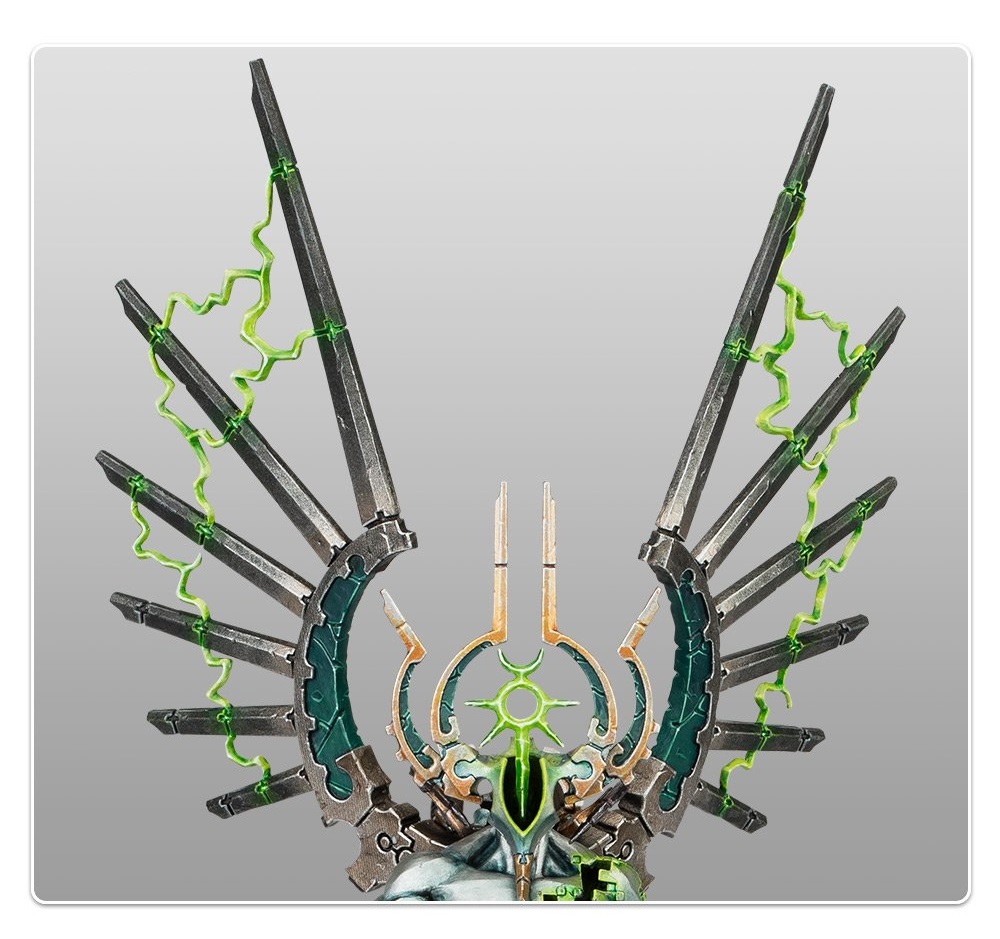 Here we have a closer look at the metallic wings of the Void Dragon. Personally, I think these look pretty cool! I like the metal/blackstone combo they have going on. I think its a good nod to the whole tehno-mechanical organism vibe that the C’tan has going on.

And finally, we get a look at the faces of the Void (dragon). GW had not previously shown us these alternate head options. It’s good to know that folks will be able to customize their C’tans a little bit using these different heads.

So what do you think of the new C’tan Shard? I’m pretty sure the Nightbringer and Deceiver are going to feel some Shard-envy.

Author: Adam Harrison
Writer, Editor, Texas Native, and Austinite for 15+ years, Adam covers all things Tabletop Gaming. Which includes Warhammer 40,000, Age of Sigmar, D&D, Board Games and everything else that involves dice, boards, cards and a table. A hobbyist, player, and collector of miniatures and games, Adam's current obsession are his Death Armies for Age of Sigmar, his Blood Angels and Tyranids for 40k, and his ever growing Arkham Horror: The Card Game Collection.
Advertisement
Games Workshop Miniatures Necrons Tabletop News Warhammer 40k Warhammer 40K 9th Edition
Advertisement 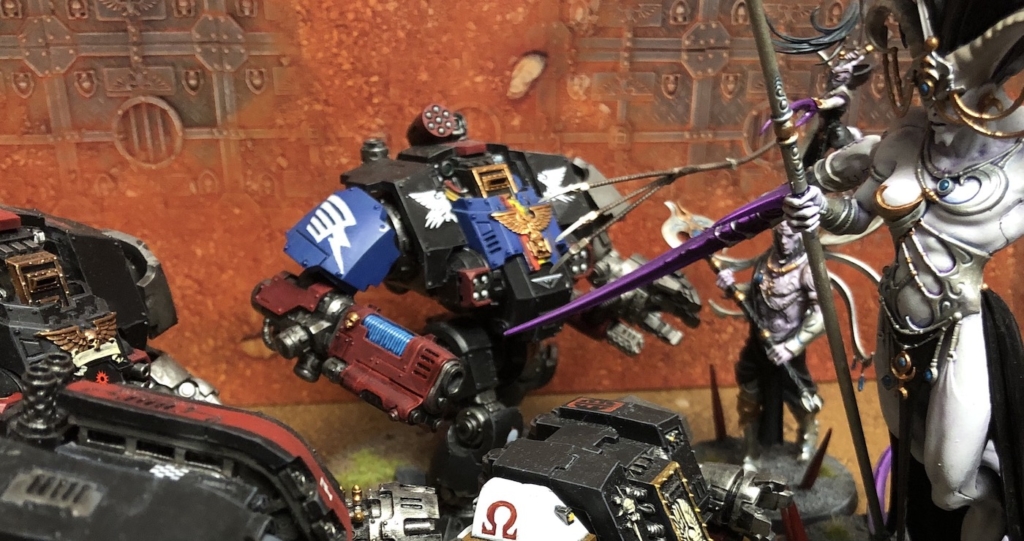