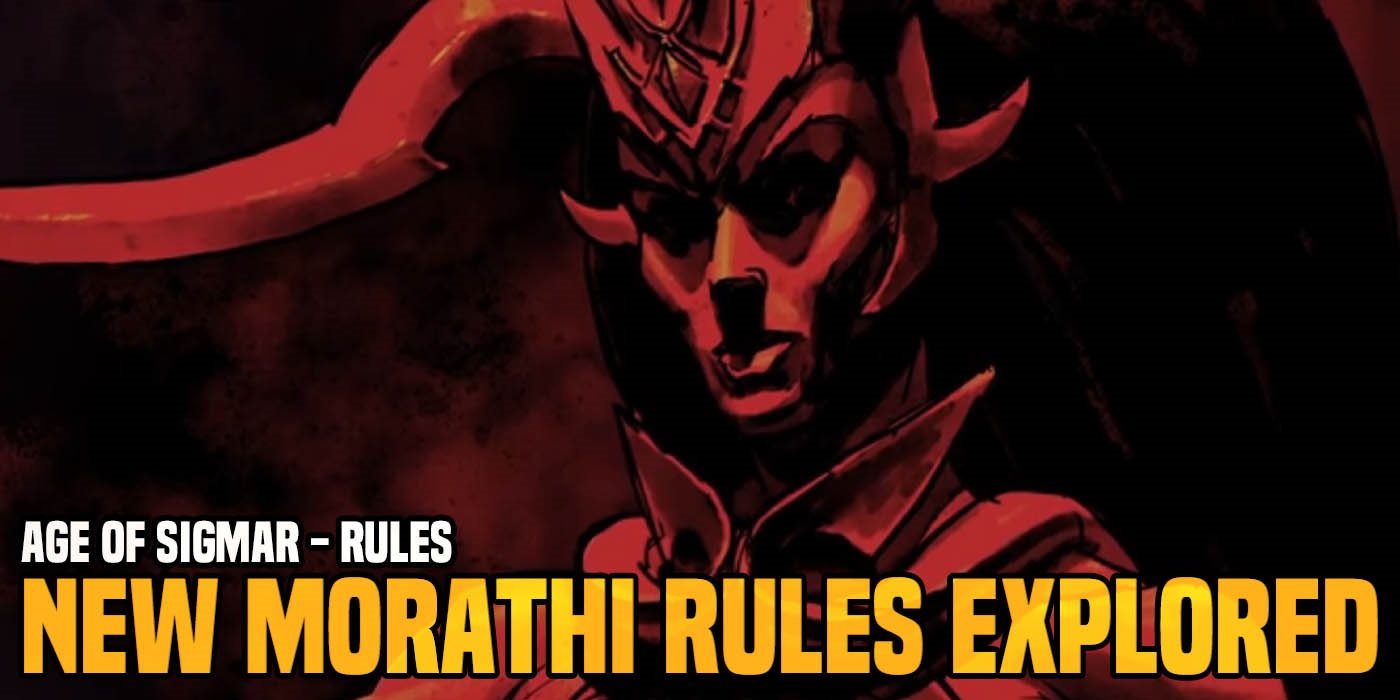 The Shadow Queen is now double the trouble. Come take a look at her two datasheets.

In the new Mortal Realms: Morathi book, some pretty important things happen in the lore. For reasons we’re going to cover later Morathi is now two models that you’ll be fielding in concert on the tabletop. For now, we’re just going to focus on her rules because there are two pages worth of them and she’s quite the threat now. 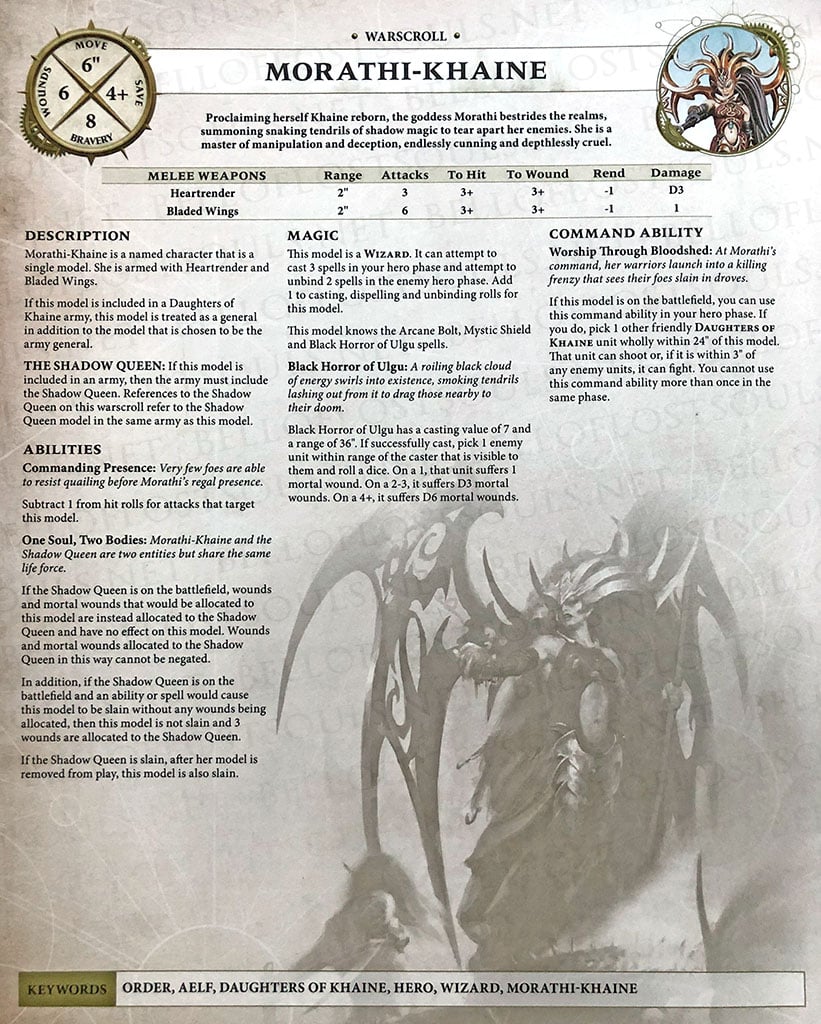 To kick things off, we’re going to look at the mini Morathi. Previously, she’d start in this form and as the game would go on, she’d be able to morph into her “true” form. More on that below. But what you need really understand are her two core rules mechanics and how those work.

The Shadow Queen/Morathi-Khaine are mirror rules that basically say that you can’t take one without the other. In fact, in the Pitched Battle Profiles, you have to take both of them for a total of 600 points. The other ability that you’ll need to understand is Two Bodies, One Soul. The basic function of this ability is that while The Shadow Queen (aka Big Morathi) is on the table, any wounds (mortal or otherwise) done to Morathi-Khaine are instead allocated to The Shadow Queen. The only way to “kill” this model is for The Shadow Queen to be removed from the table – again, more on that below.

Aside from that, she’s a potent caster in her own right. She’s harder to hit thanks to Commanding Presence and has a custom spell and Command Ability which you can read above. Overall, she’s just as much of a threat as she was solo previously – only now you’ll get to benefit from a spell-slinging Morathi for the duration vs having to morph and lose those abilities. 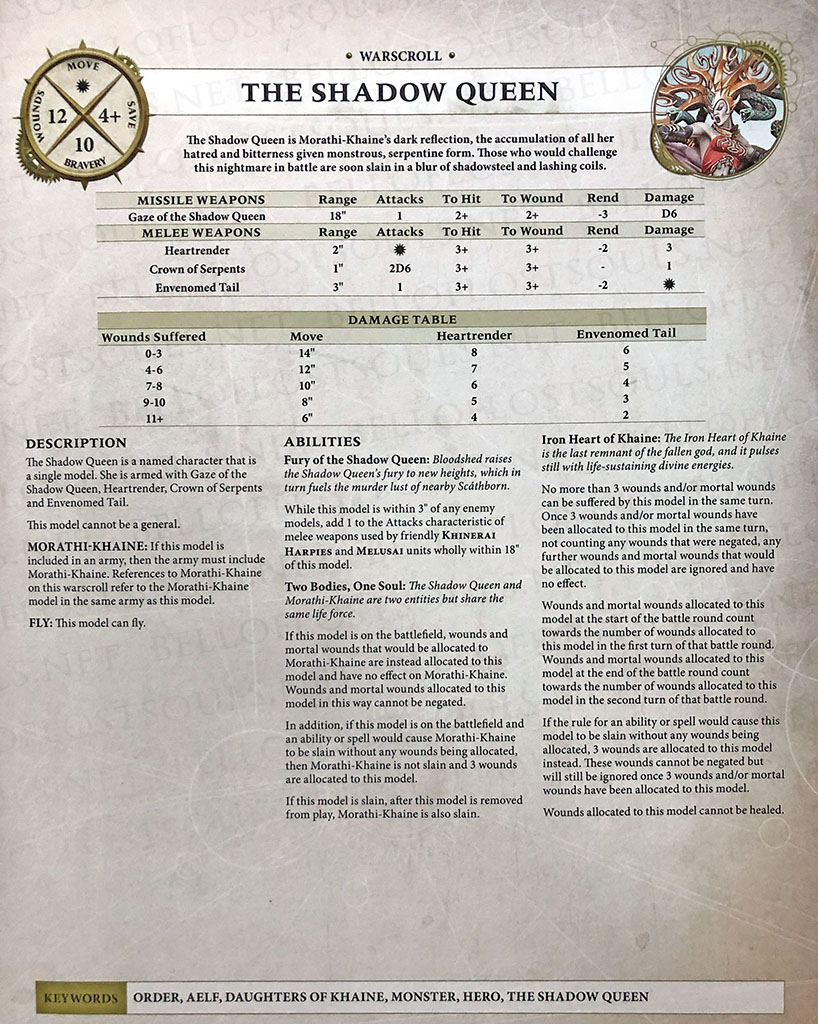 So, let’s cut to the important rule: Iron Heart of Khaine. It’s still here and it basically functions the same. Only now you can’t pull off any Endless Spell shenanigans and get a double-tap off. Morathi can be allocated 3 wounds on each of the player turns in a battle round which is a total of 6 wounds per battle round. She also can’t be healed, so there is that.

Aside from all that goodness The Shadow Queen is still a massive beat-stick. She also buffs Khinerai and Melusai units wholly within 18″ of her when she’s in close combat. That extra +1 attack stacks with all the other buffs the Melusai are getting and that’s going to make them one scary unit. 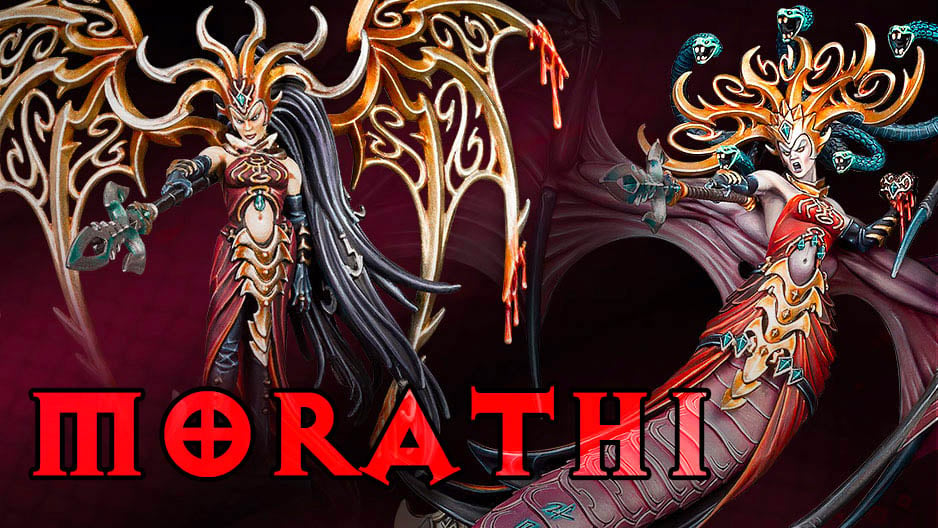 Look, Morathi was already a pretty useful addition to most Daughters of Khaine armies. She’s still a great pick and now that you’ll get to use her casting the entire time she’s on the board PLUS the fact that she’s also got her “true” form there to put the hurt down is a compelling reason to run her. It’s a serious case of double-trouble here. And she’s going to stick around for a minimum of two turns.

The Shadow Queen is here.