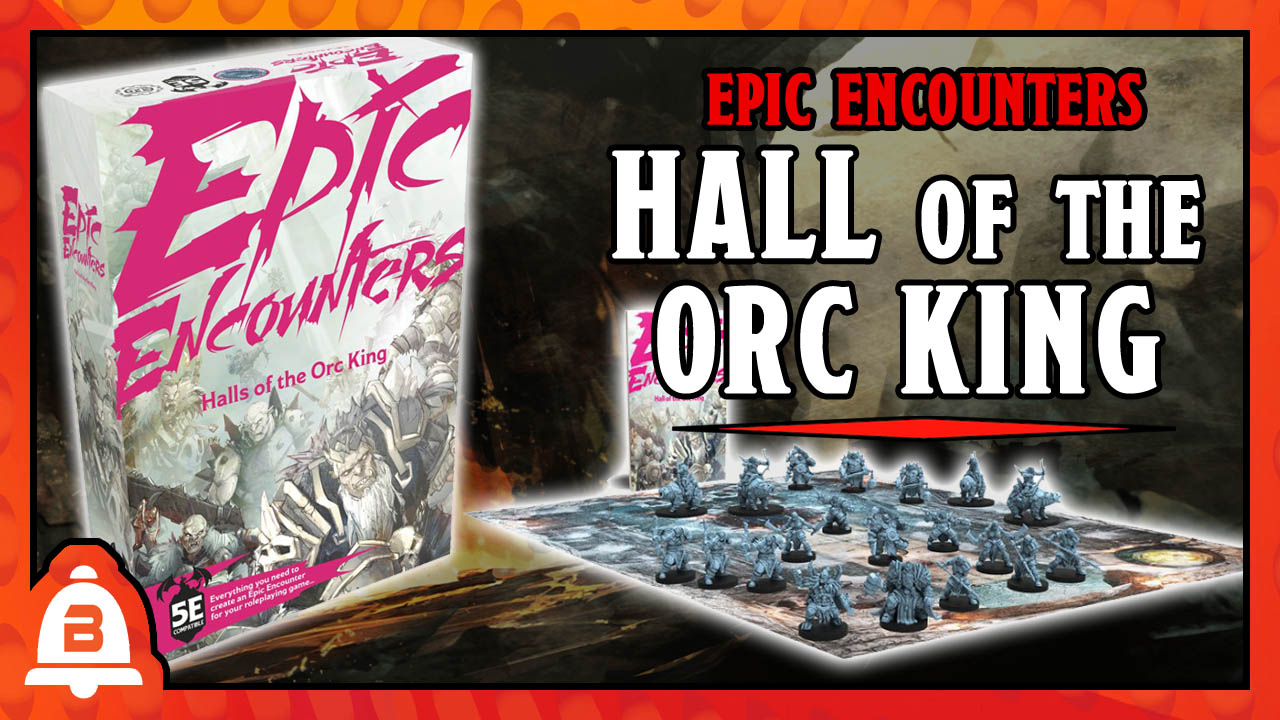 Epic Encounters: Hall of the Orc King is the turnkey adventure in a box for your next 5th Edition D&D session.

Let’s pretend you’re the GM for a D&D Game. The campaign has been going smoothly – probably because of all that planning you’ve been doing in what little spare time you have. If only your players knew. But this week has been rough. Life caught up to you and you’ve found yourself short on prep time and stressed out about what to do next for your game. Maybe you’re just not that inspired – or maybe you just felt like blowing off your prep work and playing video games instead. Hey, no judgement! As a fellow GM, I can sympathize.

But game time is quickly approaching – so what do you do? That’s where Epic Encounters comes in.

Epic Encounters from Steamforged Games is your RPG night “break glass in case of emergency” option. Or it’s your “hey this looks like a fun one-shot option.” Or maybe is the start of a brand new adventure. It’s an adventure in a box and it’s great for brand new GMs looking for a game to kick off a campaign or an exhausted veteran GM who just needs an easy night of RPGing with friends.

With very little prep time you can be setup and ready to run this adventure. Why? Because inside the box it’s got everything you need – Miniatures, maps, and even an entire adventure guide to run your players through.

Let’s start with the miniatures. They are great! Obviously, we’re dealing with Orcs in this instance so this box is packed full of them. In total it’s 20 plastic miniatures that come pre-assembled and ready to use. You don’t need clippers or glue. If you want to paint them later, you absolutely can but that’s for you GMs out there who might have more hobby time. Also they have freaking BEAR CAV: 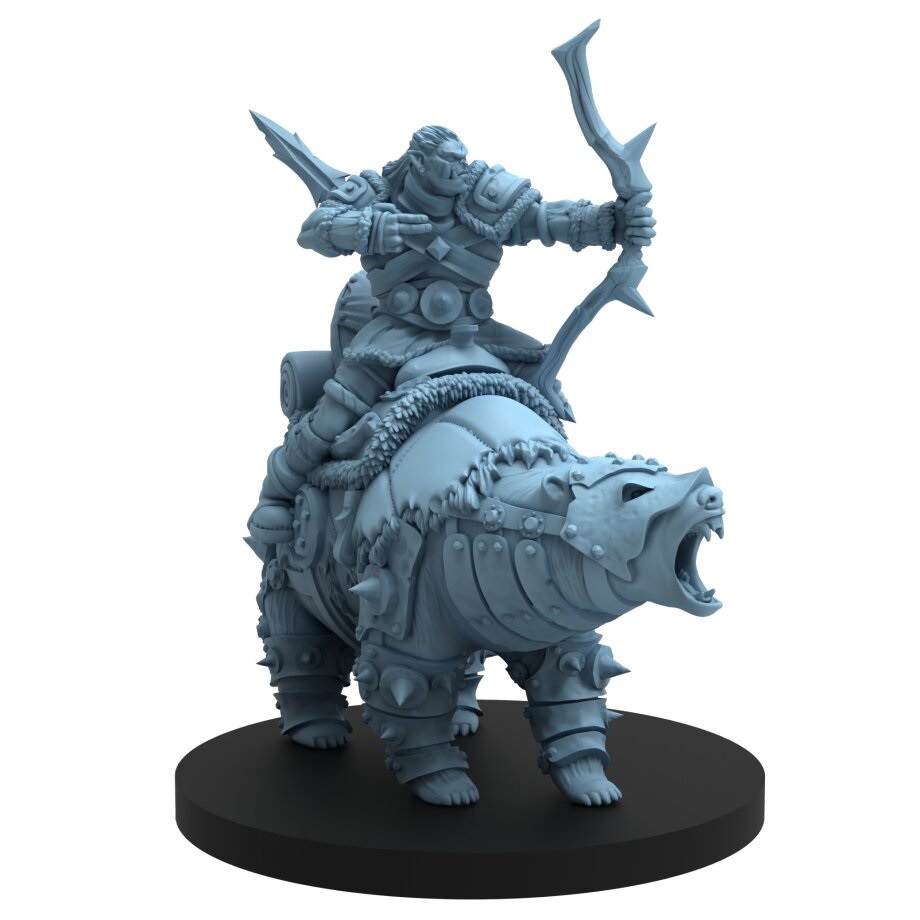 Yep! Orcs on Bears! Technically, it’s a Polar Bear – the adventure takes place in the frozen north so… yeah. But that’s not all, there are a ton of great miniatures in the box: 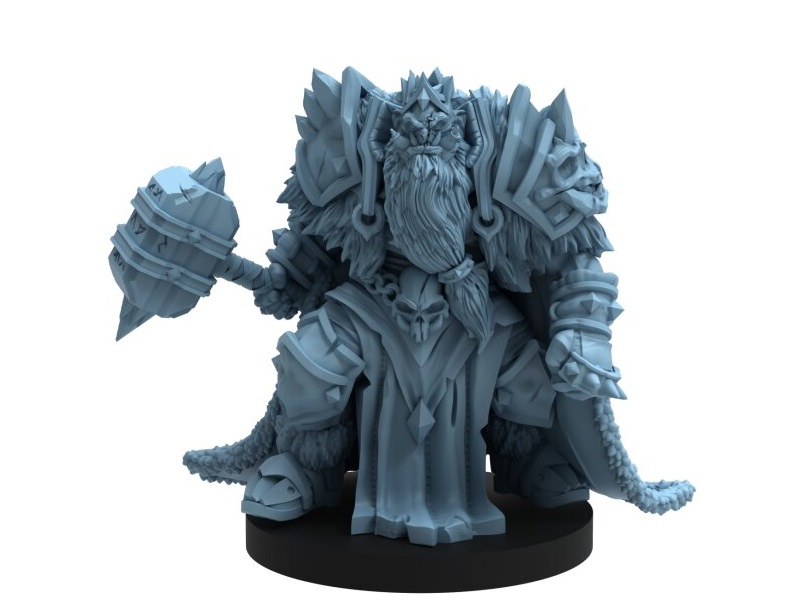 The King himself is rocking a mean looking warhammer and has a great miniature. The most creative miniature is probably the Orc cook though: 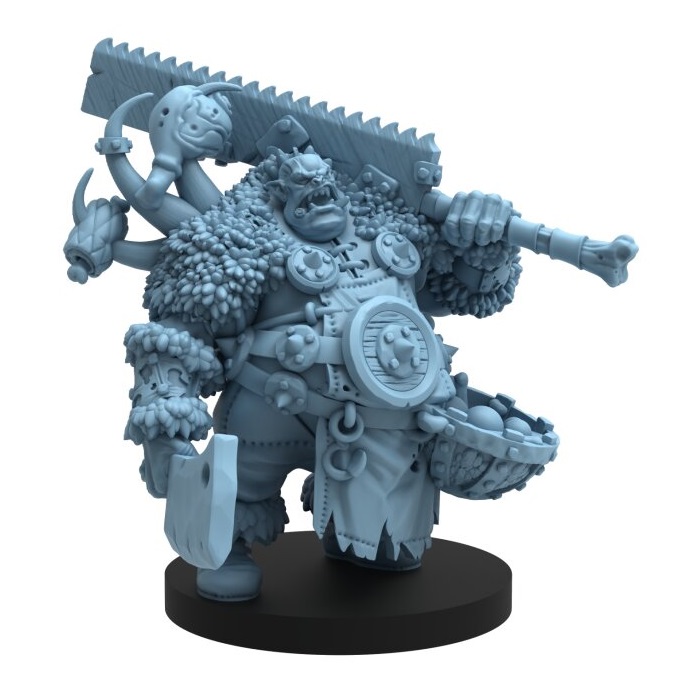 I loved this one’s crazy saw blade and “soup” bowl. Also note the hunks of meat hanging from his personal uh…drying rack? But I think my favorite model has to be the Orc Grog Master: 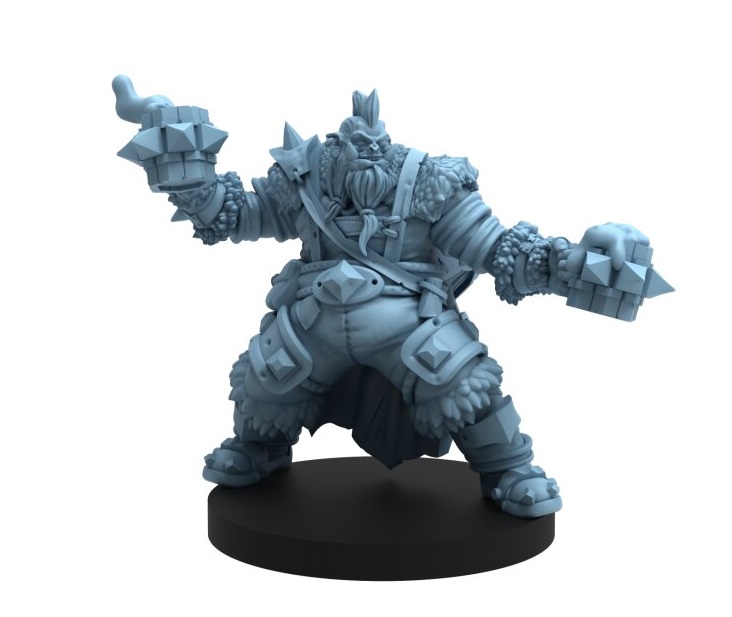 I mean, c’mon! That’s awesome. It’s a grog-swilling orc who’s tankards have spikes because of course they do. Don’t mess with his drinks or he’ll spike your punch.

You get 20 models in all and while there are some repeats, it’s plenty to run this adventure as is (or with modifications). Now, aside from that, I also want to shout-out the adventure book itself.

The book is a 33 page booklet and it’s SUPER handy. Why? Well, it’s not just a typical paint-by-numbers adventure. It’s got some background for the adventure itself, but more impressively, it’s got a BUNCH of hooks for you to use. Those ideas are solid gold for a GM to work with. This is where you’ll find your inspiration for your campaign and maybe even for a future character…you know, when you get to be on the other side of the GM Screen again. 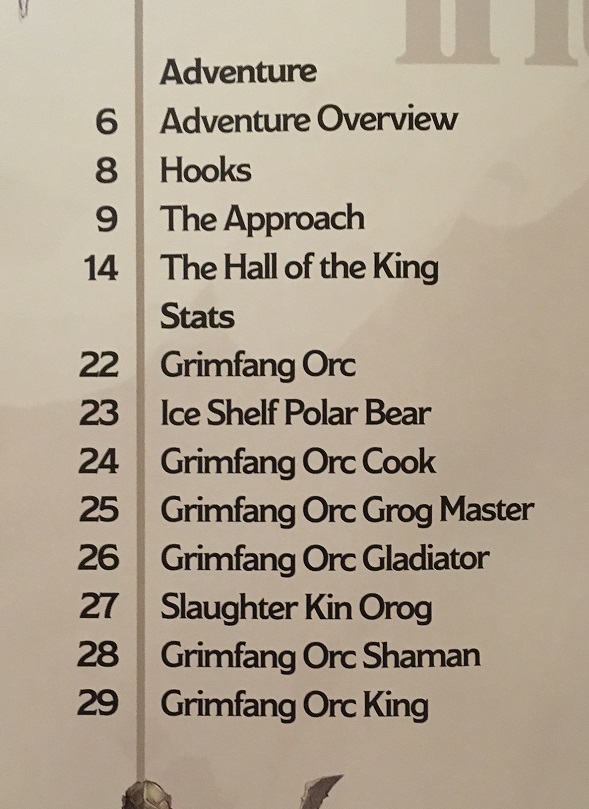 These adventure hooks are vague enough to fit into any campaign and simultaneously interesting enough to appeal to just about any group. If you want to run this adventure, you just need to read through this booklet and get a feel for it. Steamforged encourages you to use as much or as little as you like. If you need to run it step-by-step, it’s got enough structure there that you can make it work.

If you wanted to break it up and parse out the adventure over multiple sessions, there is enough meat to do that. There is also enough “open space” to fill in with extra details or special touches that a more advanced GM might want to do – or one with more time to work on the adventure. On top of having a handful of encounters planned out, some extra adventure effects in play, and some really cool maps, it’s also got all the stats for the miniatures included in the box. 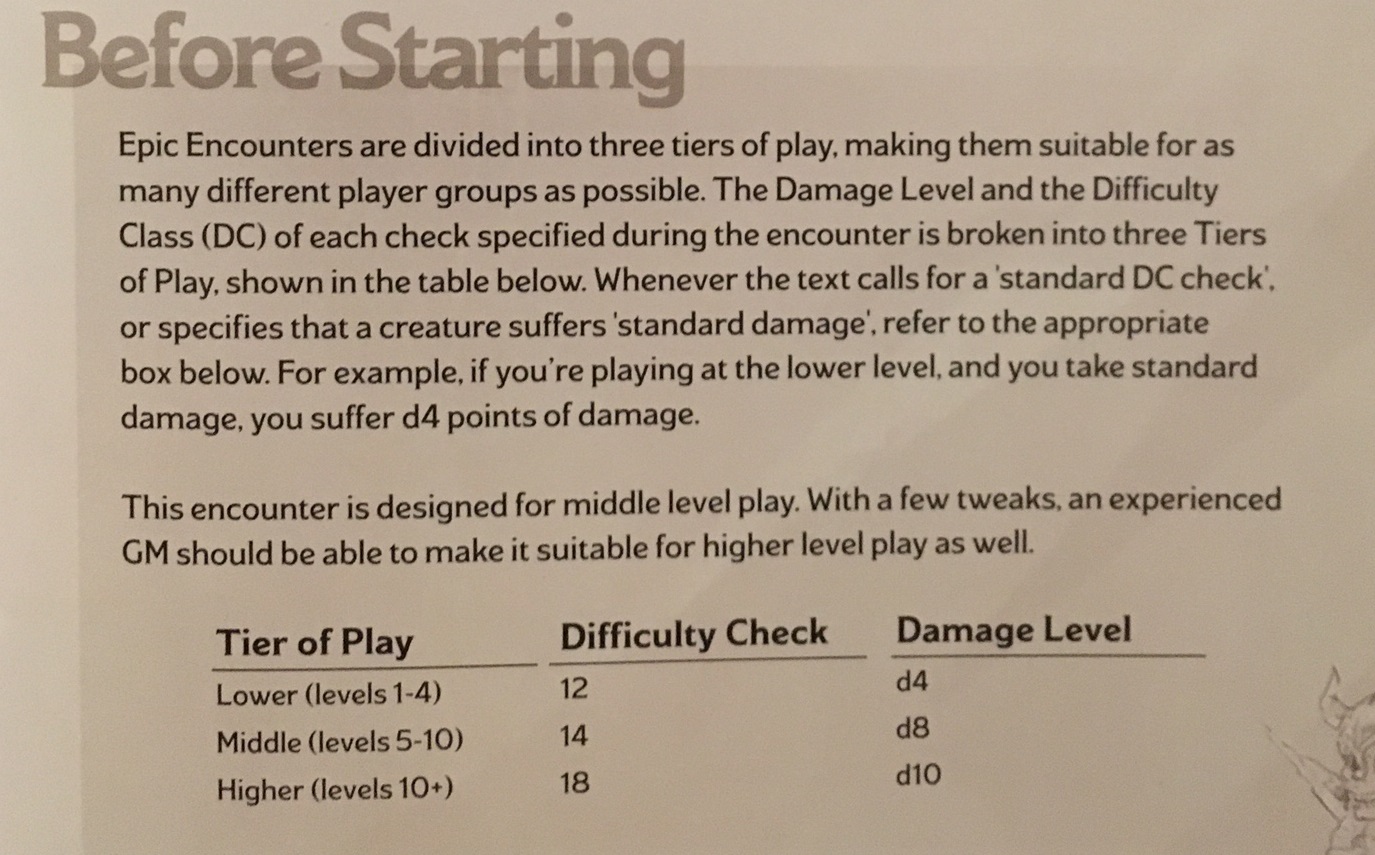 The adventure is also easily scalable, too. As is, it’s written for characters in the 5-10 level range. But with minor tweaks (HP adjustments here, AC tweaks there) you can make this easier or more difficult. You can also toss more Orcs in there at will for a higher-level game.

I know many folks will jump on this one for the miniatures and it’s a deal at that price point. But I’m also really impressed with the Adventure itself. It’s a callback to those modules from the early days. Only this one has much better maps and miniatures, too. 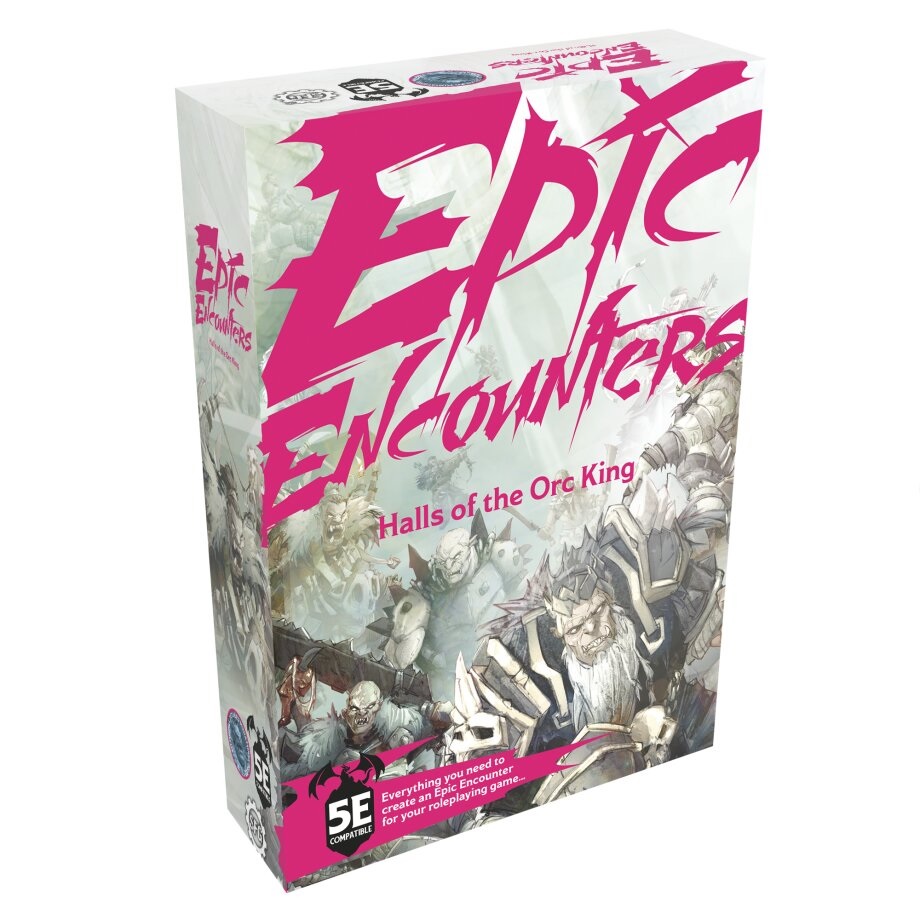 “Grab an EPIC encounter for your next fantasy roleplaying game! Made for new and experienced players, every Epic Encounters set features an all-in-one boxed encounter that’s 5e compatible and ready to play.

Dive into a frozen adventure with Hall of the Orc King, including 20 highly detailed minis!

In winter, the Orc King’s followers launch brutal raids on nearby settlements before vanishing into the snow. All the while, rumours swirl that the King grows stronger, his ambitions grander, and his army greater. Can you brave the wilderness to track the frost orcs and infiltrate their icy halls?

Use Hall of the Orc King as a standalone encounter or as part of a new or existing RPG campaign. Think you can handle the cold? Then combine this set with Caverns of the Frost Giant for a truly epic experience!”

This adventure can be followed up with the next chapter with Caverns of the Frost Giant. It would also be a fantastic adventure to slot in for anyone running Rime of the Frost Maiden as the snowy setting fits in perfectly. Just tossing that out there…

Author: Adam Harrison
Writer, Editor, Texas Native, and Austinite for 15+ years, Adam covers all things Tabletop Gaming. Which includes Warhammer 40,000, Age of Sigmar, D&D, Board Games and everything else that involves dice, boards, cards and a table. A hobbyist, player, and collector of miniatures and games, Adam's current obsession are his Death Armies for Age of Sigmar, his Blood Angels and Tyranids for 40k, and his ever growing Arkham Horror: The Card Game Collection.
Advertisement
Dungeons & Dragons Miniatures RPGs Rules
Advertisement

D&D: Turn Up The Heat With These Deadly Traps