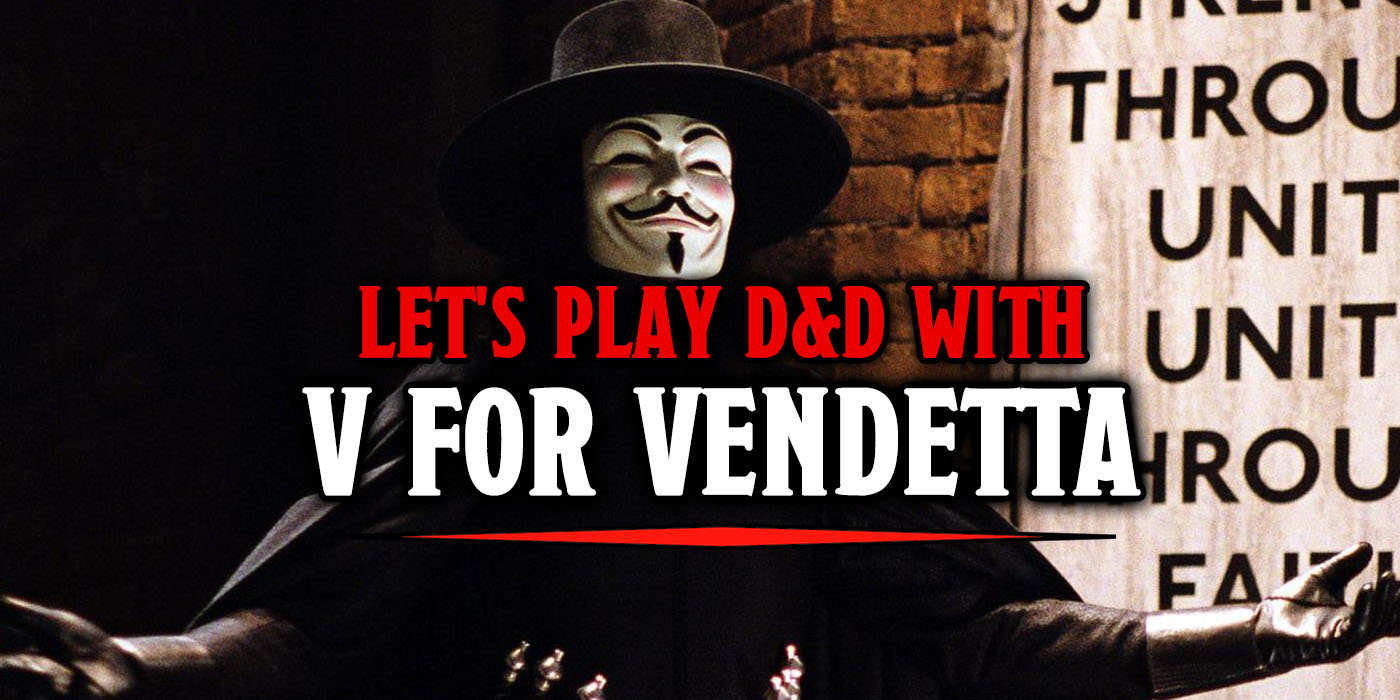 Grab your Guy Fawkes mask and most comfortable revolution starting shoes, this week we’re playing D&D with V for Vendetta.

I did not remember remember the fifth of November this year. It’s been one of those years, y’know? Is today November 5th? No? Sure. Apparently Netflix was also confused about the day because they just added V for Vendetta this past Sunday. To celebrate both Netflix and myself being about ten days late to the party, let’s take a look at how we can add some totalitarianism espionage to our next Dungeons and Dragons campaign. 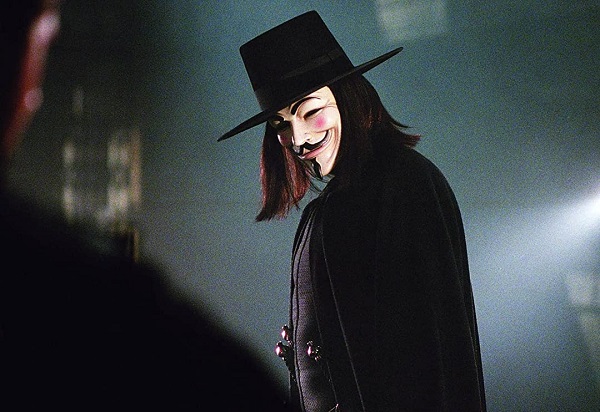 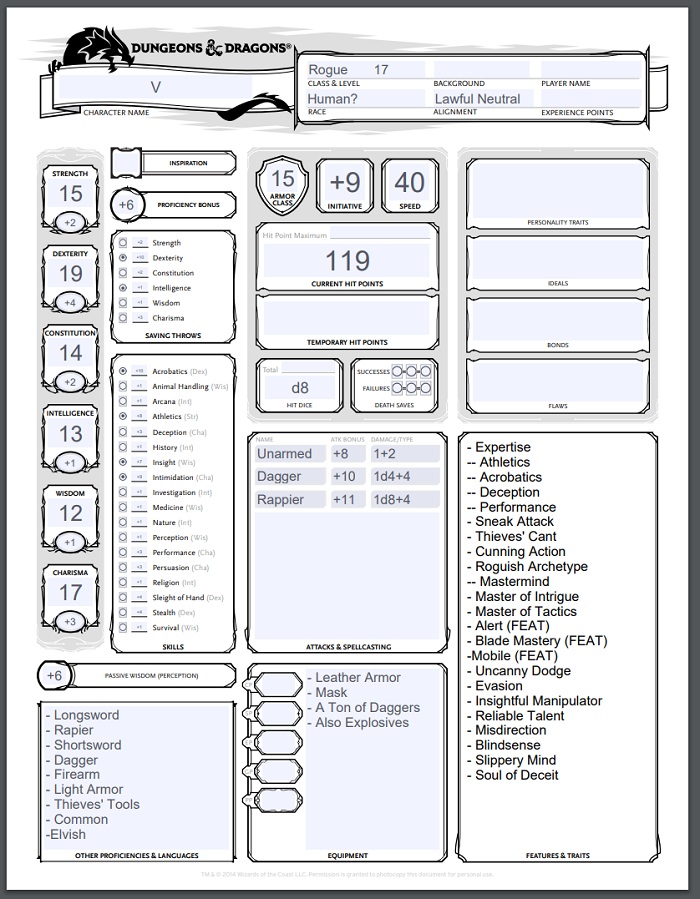 This sheet was just fun to make. Rogue sheets usually are because there’s a little less going on without spells, but they have some great abilities. V has a few things going for him that translate very well into D&D. Heightened strength, done, no problem. Athletics? Got it. Costumes and deception? Rogue felt right for him with his vigilantism, but there are so many fun and fitting roguish archetypes and I waffled between a few for a while. Swashbuckler may have worked, especially given his fighting style and general charisma. Arcane Trickster may have been interesting, but didn’t quite fit.

In the end, I went with Mastermind because of his ability to plan things out to the Nth degree, trick everyone around him, and be an enigma. Soul of Deceit alone is perfect for having a character whose mind is impossible to read. I also made him a very very high level character, even by the standard of other pop characters I make. This is a character who is existing towards the end of their adventure before a younger character steps in and continues their legacy. Finally, you may be wondering why I went with Lawful Neutral when he’s the farthest thing from lawful. He cares a lot about his own personal code and goes through absurd measures to test people against it. They’re just not the rules of the land. 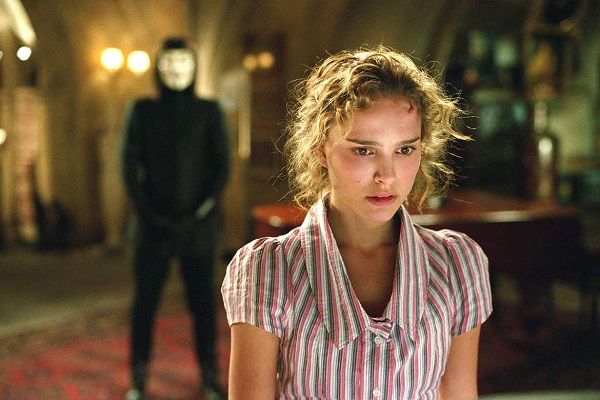 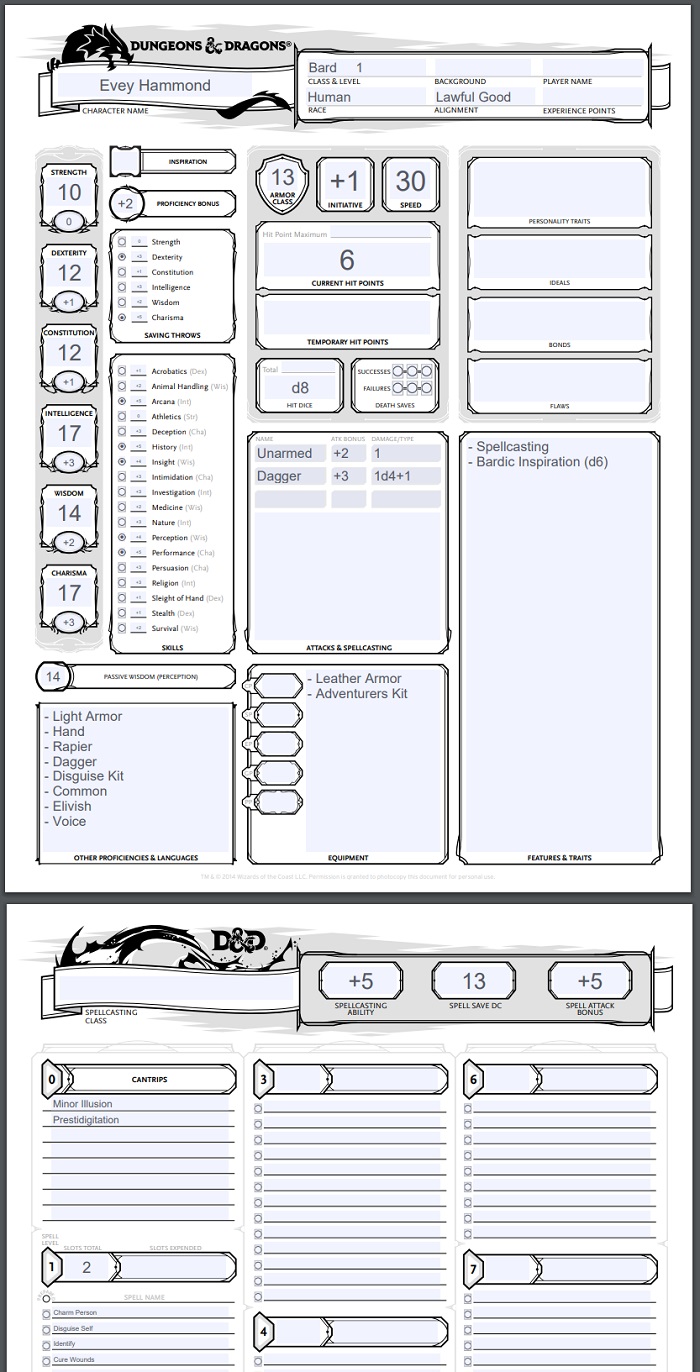 Evey is almost the polar opposite character. I made her a bard based on her charisma and job in media in the movie version. But she’s also a very new adventurer compared to V. Prior to this point she’s probably been the equivalent of a commoner or a townsperson and was suddenly and accidentally swept up in V’s mission. She’s lawful good for the moment, but that will slowly change throughout the course of the game as she becomes more and more disillusioned with the world around her. Her spells represent her nature at the beginning of the movie, being mainly concerned with avoiding danger and healing than active attack. Where V is at the end of his campaign and likely played by a person who is ready to reroll a new character, Evey is right at the beginning of hers and has all of the potential in the world.

How would you have made these characters for D&D? Did you also lose track of days until social media reminded you? What movies or shows would you like to see me do next? Let us know in the comments!