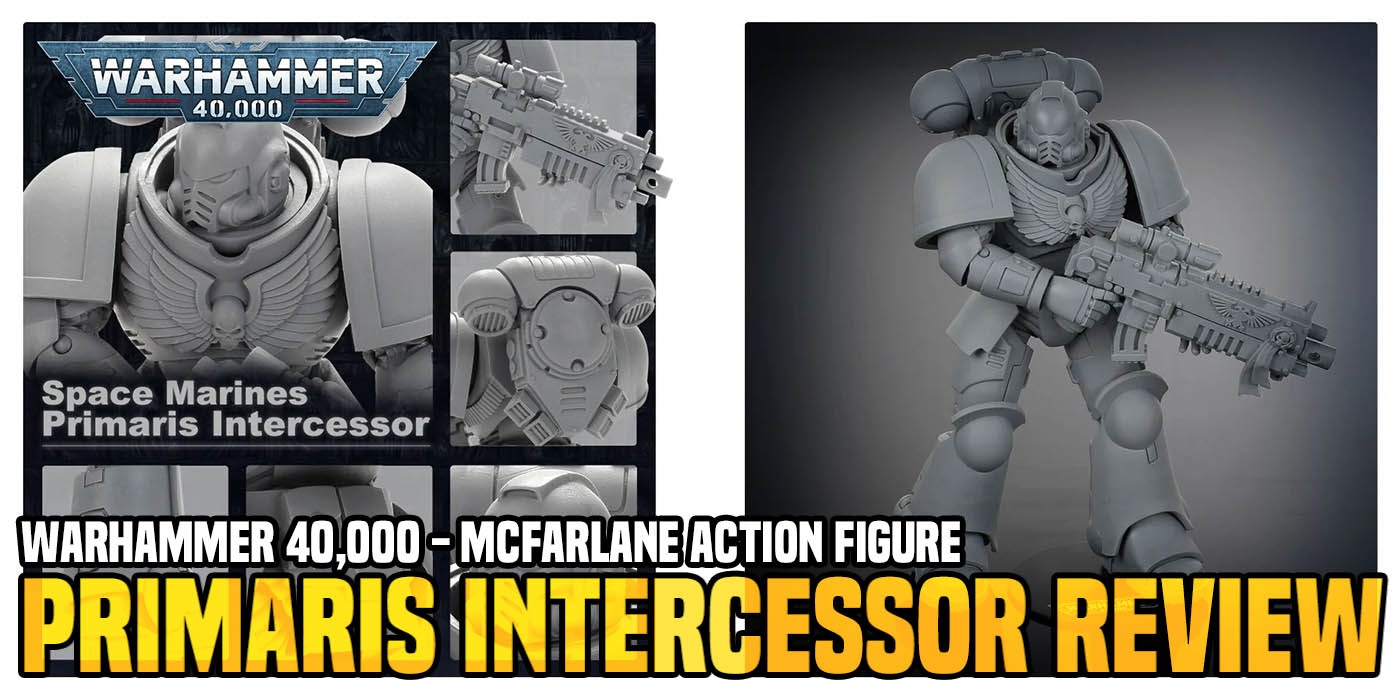 The McFarlane Space Marine Artist’s Proof is in the house – does it pass the test? Check it out!

So this past week I stopped by my FLGS and picked up a special order I put in. I scored myself one of the Space Marine Primaris Intercessor Artist’s Proof Action Figures. I’ve opened up the box and inspected the Action Figure. Here are my thoughts.

First things first – I tried to photograph this one in a lightbox – but this being a 7″ Action Figure, my lightbox just isn’t big enough. But it’s what I had so my apologize. Second, I did do some light prep work on this Action Figure. I plan on painting it so I cleaned it with soap and warm water to remove any leftover mold release. I could feel a bit on the figure a quick, but firm scrubbing fixed that. 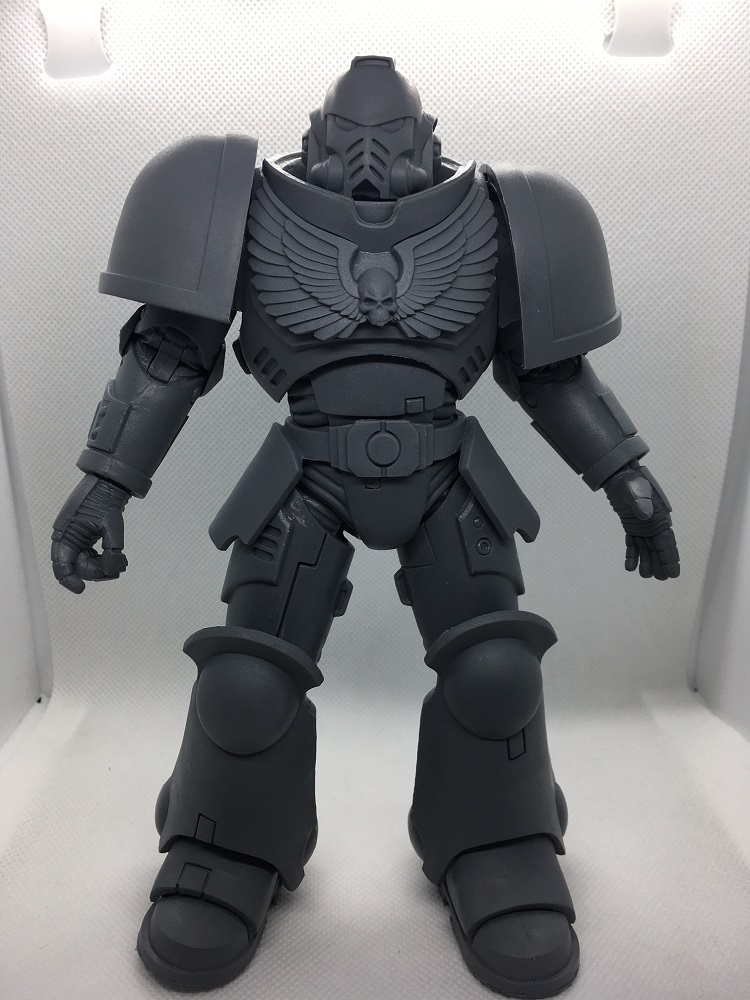 Thirdly, I did attempt to clean up some of the flash on the mold lines. However, the material is…not the best. It’s listed as plastic – but it’s soft plastic. I’m not a materials expert but I’ve worked with tons of different miniatures in a variety of mediums and while this is supposed to be a toy, I’m not a fan of the material it’s made from. If you remember the era of Warmachine when they were using that soft plastic-PVC stuff…it’s not quite that bad, but it’s not much better. At least it doesn’t have that glossy shine.

In the picture above you can see some scuff marks on the upper right thigh. That’s where I was using a hobby knife to clean up some excess lines. It’s not the worst mold line job on a figure I’ve seen. But, again, I plan on painting this thing. 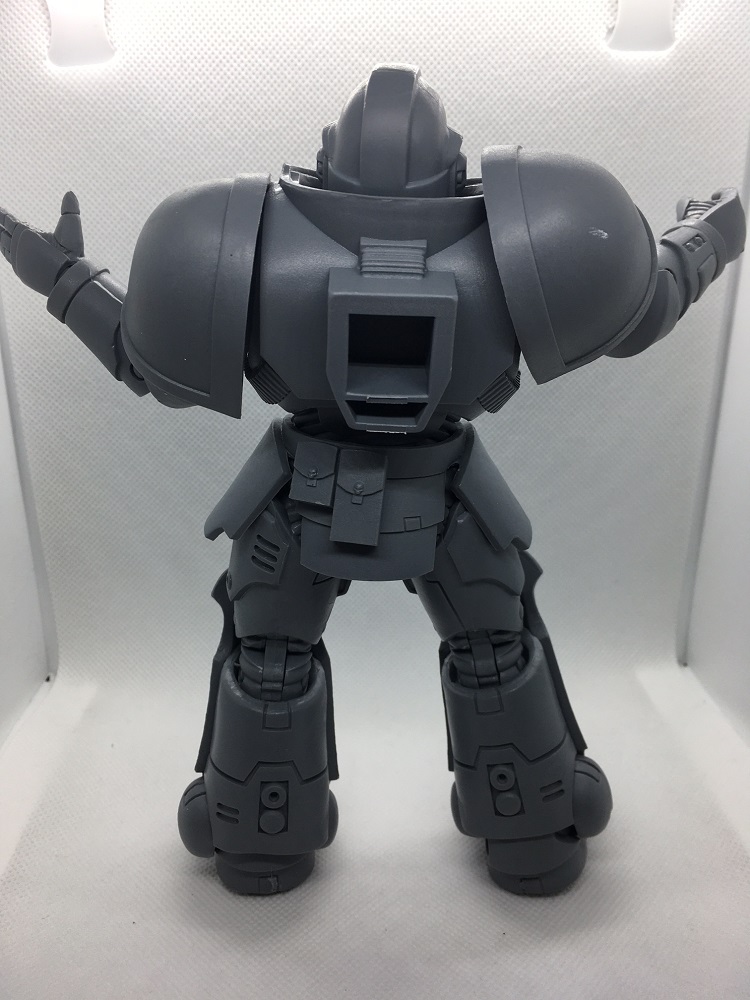 In terms of articulation, it’s got that in droves. There are 22 points of articulation and you can position it in a variety of ways. That’s going to lead to some interesting challenges when priming and painting, but that’s okay. The main joints (feet, knees, elbows) are not ball-and-socket joints like the shoulders, hands, or head. They are pretty stiff which helps the figure hold it’s pose. 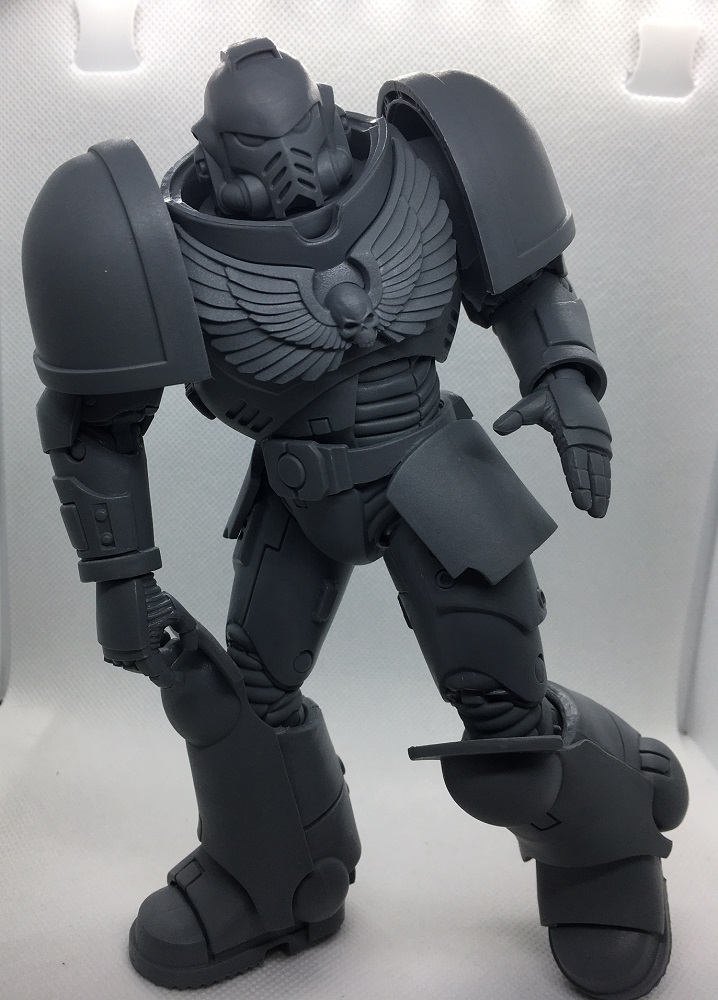 It does come with a black plastic base which I left off to showcase the fact that his figure will stand on it’s own – even in a goofy pose like the one above.

The accessories are pretty good. The backpack just pops in using a big square plug and the Bolt Rifle is fairly clean. The handle is rather thick however. 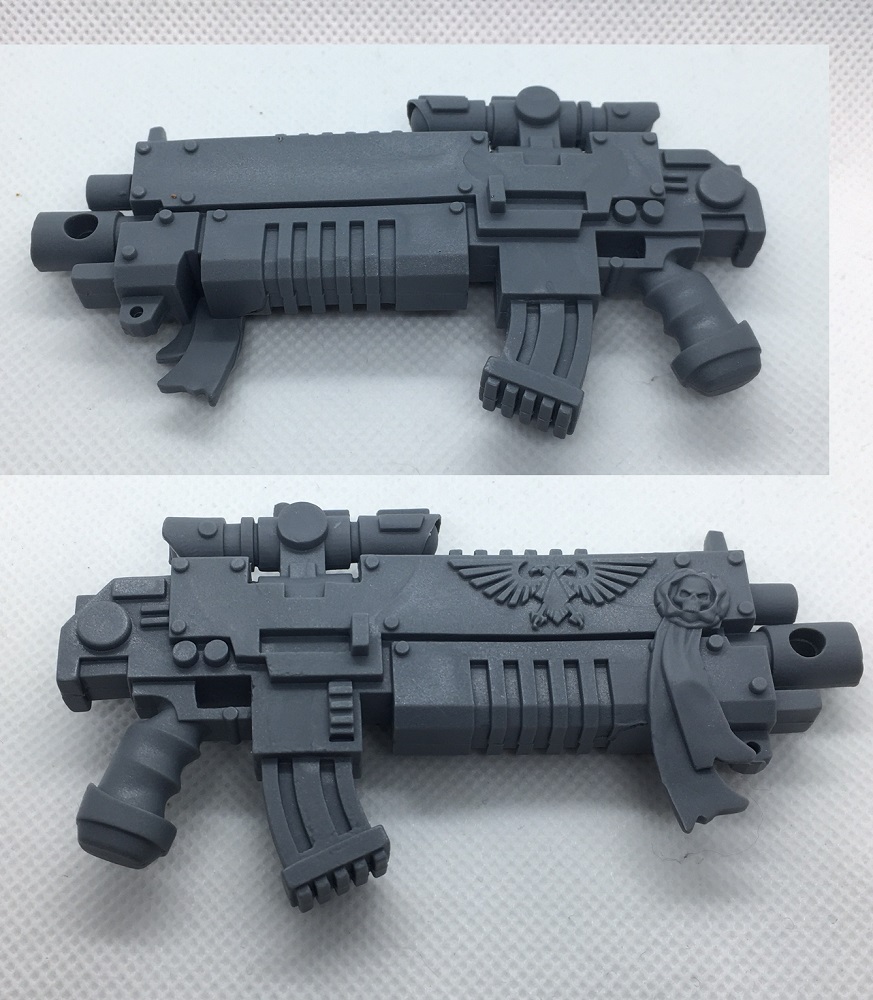 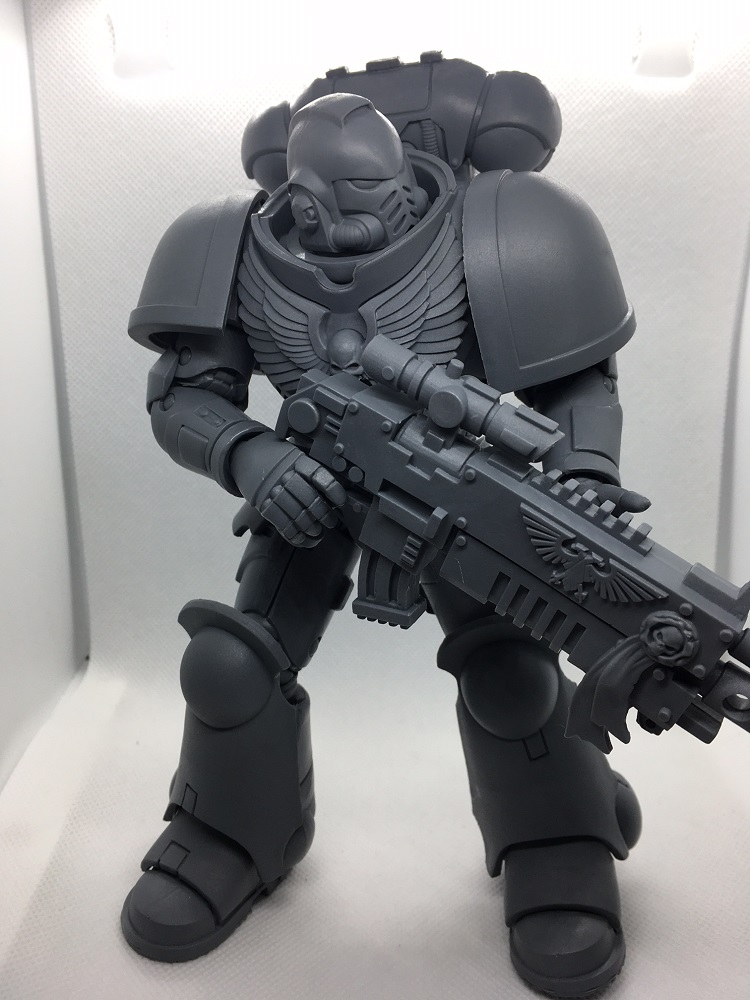 While I appreciate the trigger discipline, It’s going to make for more of a challenge when trying to pose this figure like it’s aiming. The left hand is also just sort of open. Which is fine I suppose – this is an Artist’s Proof. It would have been cool to have some hand swaps or something like that but I’m not really that upset. For the price, size, and detail that IS on the action figure, I think it’s a great deal. Plus, I’ll finally get to paint up an Action Figure sized Space Marine and I’m perfectly fine with that!

It’s not perfect, but it’s mine and I’m happy with it. I think the hobby community has been doing some amazing work with the figures so far and that alone has been worth it for this little McFarlane/GW experiment. 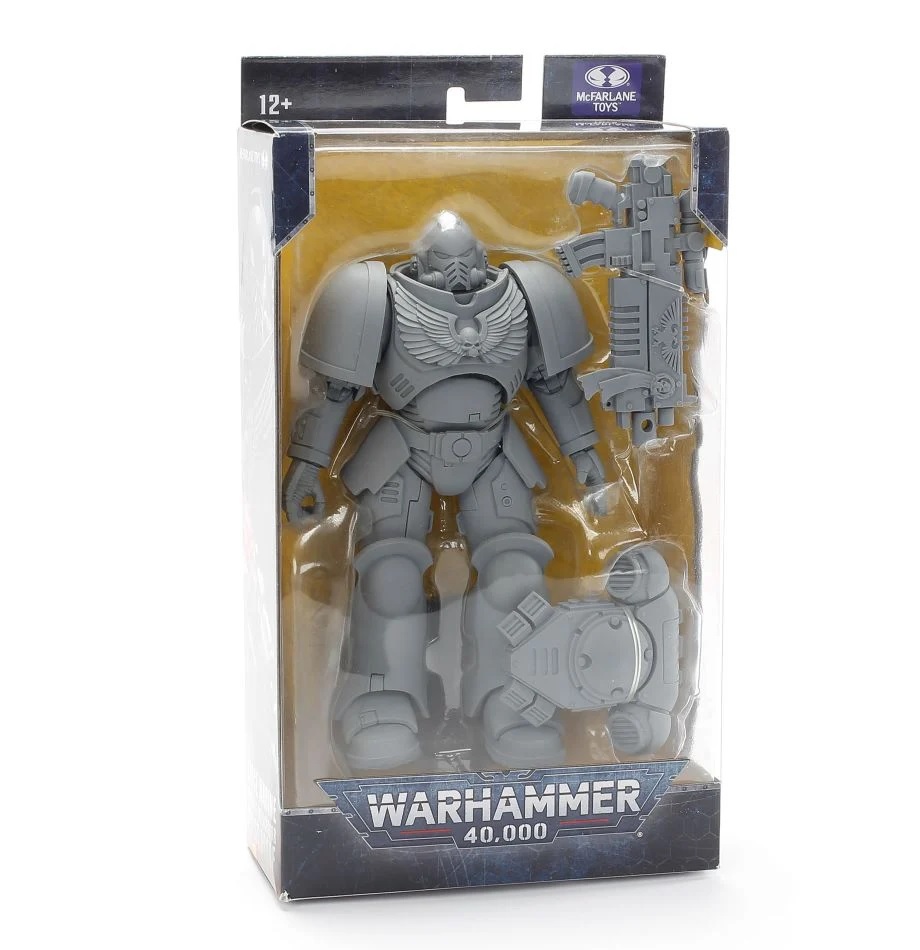 The Adeptus Astartes, commonly known as Space Marines, are incredibly powerful transhuman soldiers armed with potent weapons of war and power armour that allow them to go toe-to-toe with the unspeakable horrors of the 41st Millennium. They’re organised into over a thousand Chapters, each with their own heraldry, history and methods of warfare.

An Ultramarines Intercessor action figure that was released earlier this year sold out rapidly – now is your chance to get an Intercessor of your own, but without the blue paint job! This incredible figure will no doubt be displayed prominently on your shelf to amaze and inspire you for years to come. Of course, nobody could blame you for spending hours putting him into dynamic power poses and making “pew-pew” noises for his bolter – the figure has 22 points of articulation to allow you to do just that.

This 7” figure is cast and assembled with the exceptional quality you’d expect from McFarlane Toys. It comes in grey plastic to allow you to paint it in the colours of your favourite Space Marine Chapter. He’s armed with a holy bolt rifle, complete with an Aquila design and purity seal. This figure also comes complete with a base to stand the model on to keep it steady on your shelves. It comes packaged in a display box with a window to allow you to see your figure.

TL;DR – not a fan of the material, but love the action figure.

It’s sold out online from GW. But maybe the GW team and McFarlane will want to do a second print run. It would be like printing money at this point.