Ice is nice, and these armies know it.

Just like the real world, the Realms are susceptible to the change of seasons, but some places feel it more intimately than others. Aqshy, for example, probably never gets cold, while I imagine Ulgu rarely raises above the high 60s. Since it’s winter here, I figured it might be fun to look into how some of the armies of the Realms, so here’s my favorite winter-themed AoS armies. 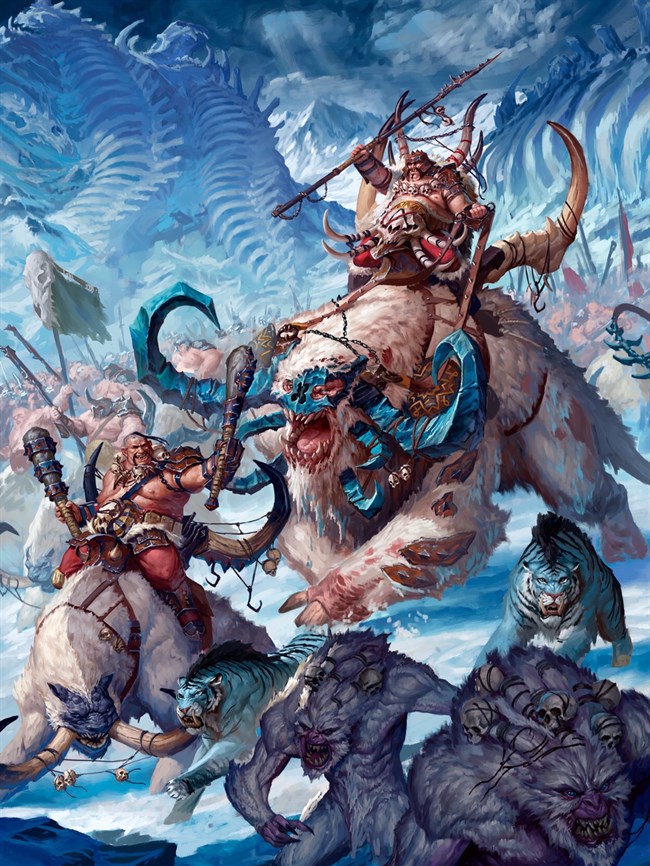 The original kings of cold, the Beastclaw Raider subset of Ogres ride out of their cold mountain strongholds on woolly beasts, bringing a numbing blizzard in their wake called the Everwinter. They wield cold-forged weapons, some even enchanted with the cold itself, or carved from magical ice in the case of their Yhetee companions, and seek out the largest prey they can find to prove their prowess as hunters. The greatest of them, the Frostlords, lead their warriors from atop crag-faced Stonehorns that can shatter an enemy line as easy as reeds or grim Thundertusks that can fire blasts of ice into their foes. Basically, if you want an army that combines the coolest parts of the Mongols, Vikings, and gourmet cooking, look into the Beastclaw Raiders. 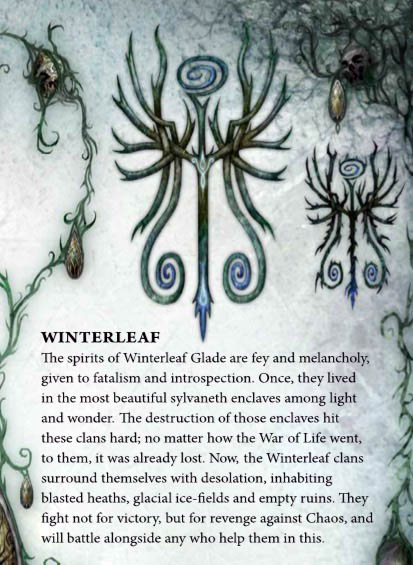 What’s more dangerous than an army of angry, murder-happy tree spirits that take the slightest insult as a deep personal injury? An army of angry, murder-happy tree spirits that just happens to have had their hearts turned to ice and all mercy rung out of them. That’s exactly what you get with the Winterleaf Sylvaneth glade, one of the subfactions available to you are army creation. It used to be one of the most beautiful and vibrant glades in all the Realms, but since no one in the world of AoS is allowed to have nice things, that splendor attracted the armies of Nurgle. The foul daemons and warriors infected the gardens with a virulent pox and kidnapped their liege, the Bough-Mother, taking her deep into the Garden of Nurgle to suffer a fate worse than death: to be the target of Grandfather’s “gifts”. Those few Sylvaneth that survived the attack fled to the Frozen Chaos Wastes. After that, they abandoned their original name and become bitter and cold creatures, becoming a force second in fear-mongering only to the Dreadwood Glade. If you want to punish your enemies for daring to attack your forces, hurl frozen thorns into your foes, and fight with the ferocity of a winter storm, this is the subfaction for you.

Do you have any winter themed armies?