Board Games Retro: Doing Chores For Your “Wizards” 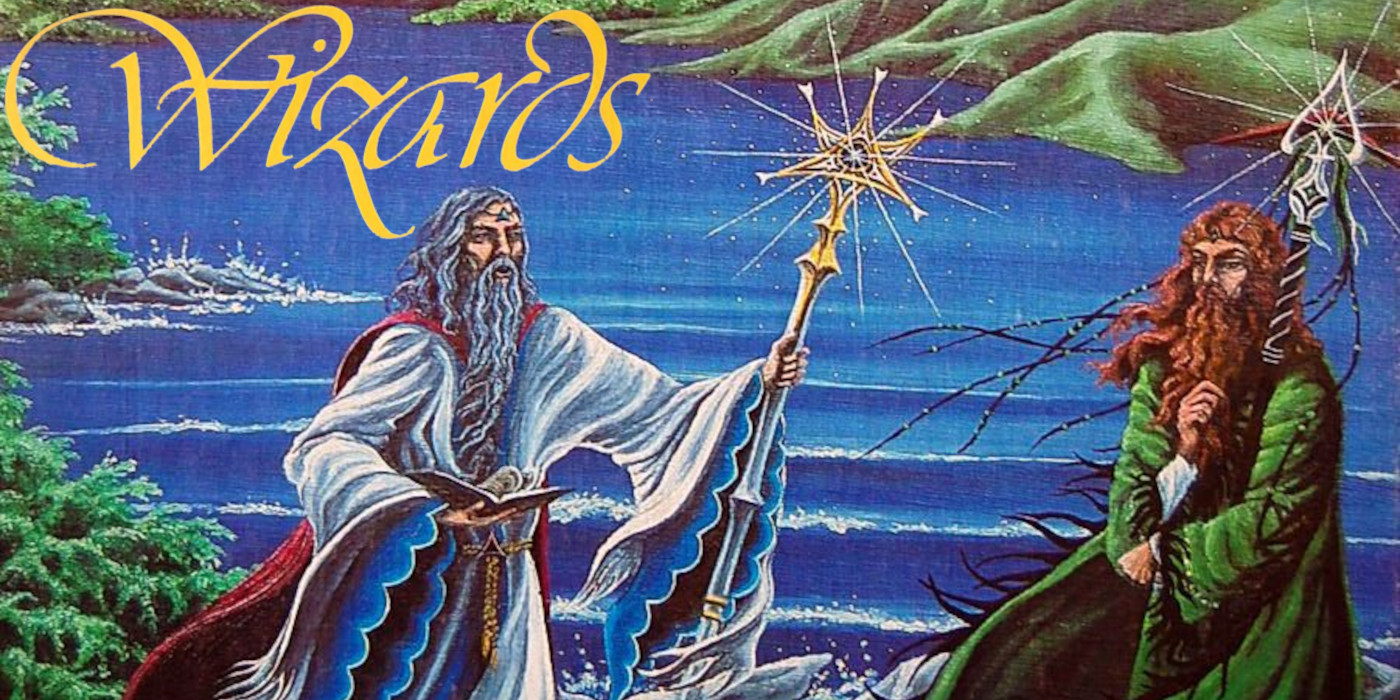 Wizards are a needy bunch with plenty of odd jobs that need doing. But they’re certainly not going to do them themselves. That’s where you come in.

The early 80’s was a truly fantastic era. I mean that literally. There was a lot of fantasy media being produced. Among them was our featured retro game of the day, simply titled Wizards. 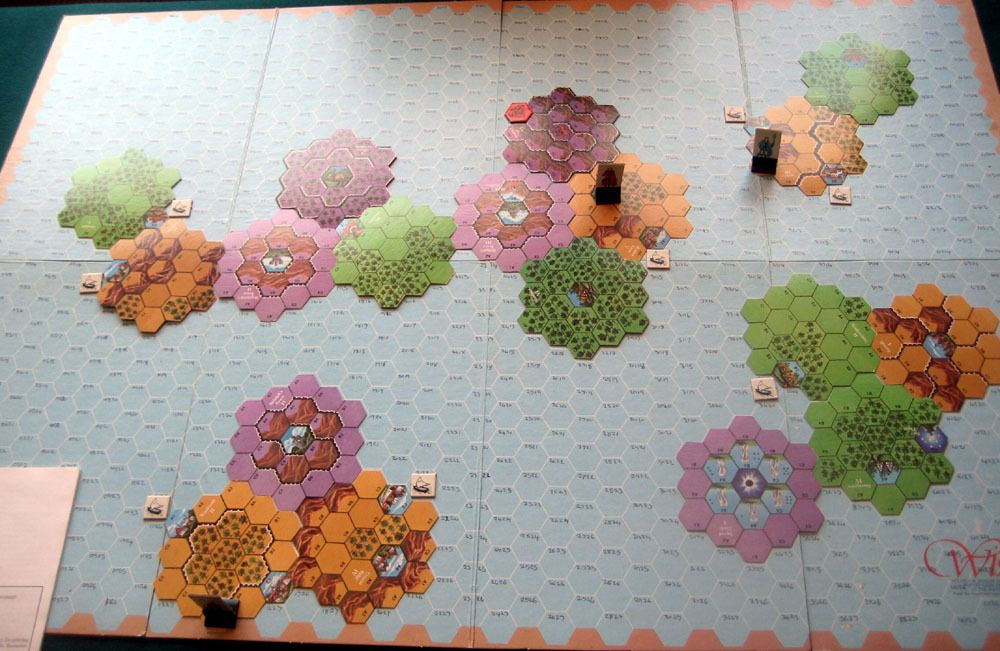 Released in 1982 by Avalon Hill, Wizards certainly looks like your typical cardboard chit wargame you’d expect to see from Avalon Hill, but in fact, it’s much less interesting than that! Wizards is a semi-cooperative pick-up-and-deliver adventure game. Each player takes the role of a fledgling wizard, looking to make their mark on the world. The goal of each player is to be the first to collect 6 gem fragments and bring them to the High Druid. Each of these Gem Fragments are held by the wizards which live on the Enchanted Islands of the world. And these wizards aren’t going to give up these gems so easily, even though failure to collect them means the end of the world. No, these wizards have a bunch of meaningless fetch quests they need you to do before they’re willing to help you out. Quests like, “Bring this lady home” or “Be a messenger” or even “Be a roadie for this one bard guy”. 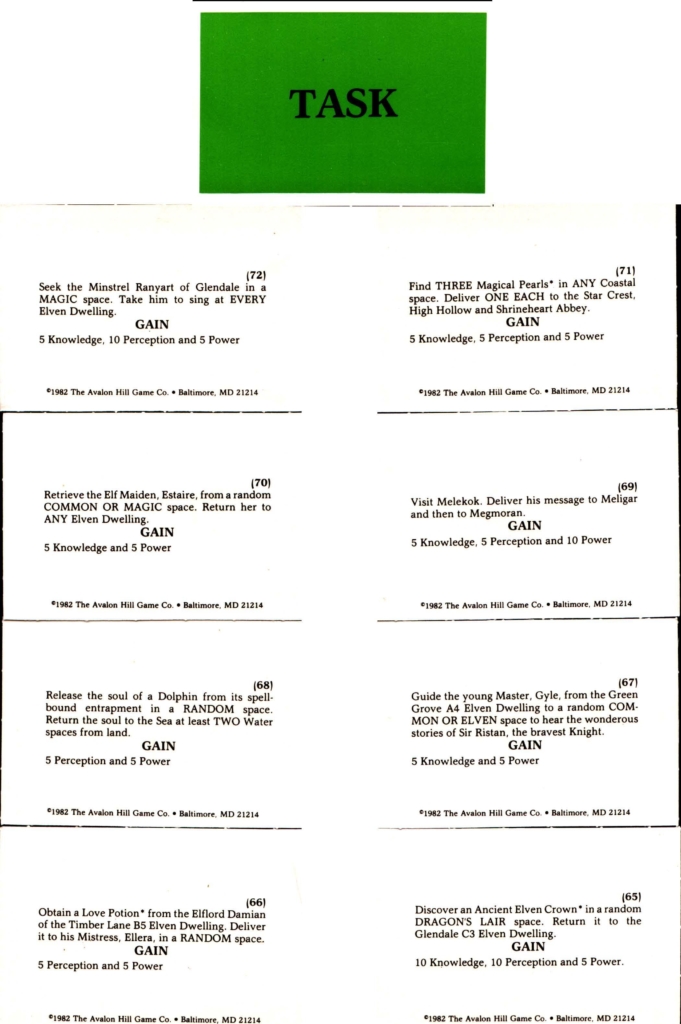 If that doesn’t scream excitement, I don’t know what does.

There are other tasks, which feel more impactful, but ultimately every task is some manner of “go here then go here and maybe also here.” None of the tasks require using the stats which they grant upon their completion. That’s only for leveling up, which sounds exciting at first, but again is ultimately unfulfilling. Each player chooses an Order to join and ranking up in that Order requires specific stat thresholds. These thresholds do unlock spells, but over half the spells are just spells which help with your movement across the map. 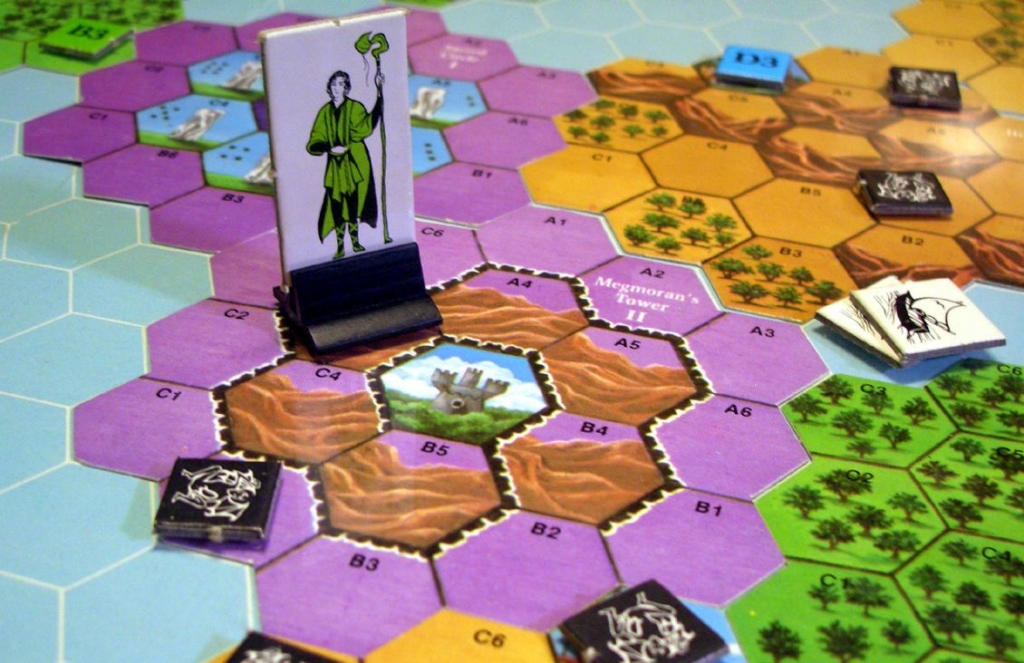 Speaking of the map, the game is not without some interesting ideas. During setup, each of the games 18 map hex tiles are distributed among the players. These map tiles are placed by the players anywhere they want on the provided ocean board. The only rule regarding tile placement is each map tile can not overlap with any other. There’s no need for congruency here! If you want to place a map tile way off on the other side of the world, you can do that. The game has rules for using boats and even swimming. But, you better hope there’s no important tasks on that island, because time is of the essence. And the stop and drop spots for the tasks are all random. 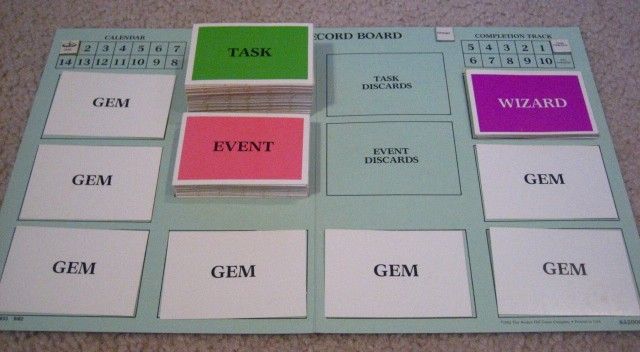 The final neat (and potentially damning) idea this game offers is the Evil Attack phase. The whole premise of the game is warding off evil demons from destroying the world. But they do this as the game is played. In a very Forbidden Desert style, every 14 turns the demons attack and whichever map tile has the most task tokens and demon tokens is flipped over, becoming inaccessable for the remainder of the game. The brown Common land tiles are flipped first, then the green Elven land tiles, and finally the purple Magic land tiles. If the High Druid, who lives in one of the Magic land tiles is flipped, the game is over and the players lose. But if they can manage to scour the world, doing odd jobs for these wizards until they reach level 4, collect the 6 gem fragments and bring them to the High Druid, they win!

Ultimately, this game does have a lot of really neat ideas, but they are buried under a sea of random chance. You can have a task that requires you to literally traverse the entire map 3 times, only to be rewarded with a stat boost you don’t even need. Alternately, you can have a task which you can finish in a single turn if the dice roll in your favor. 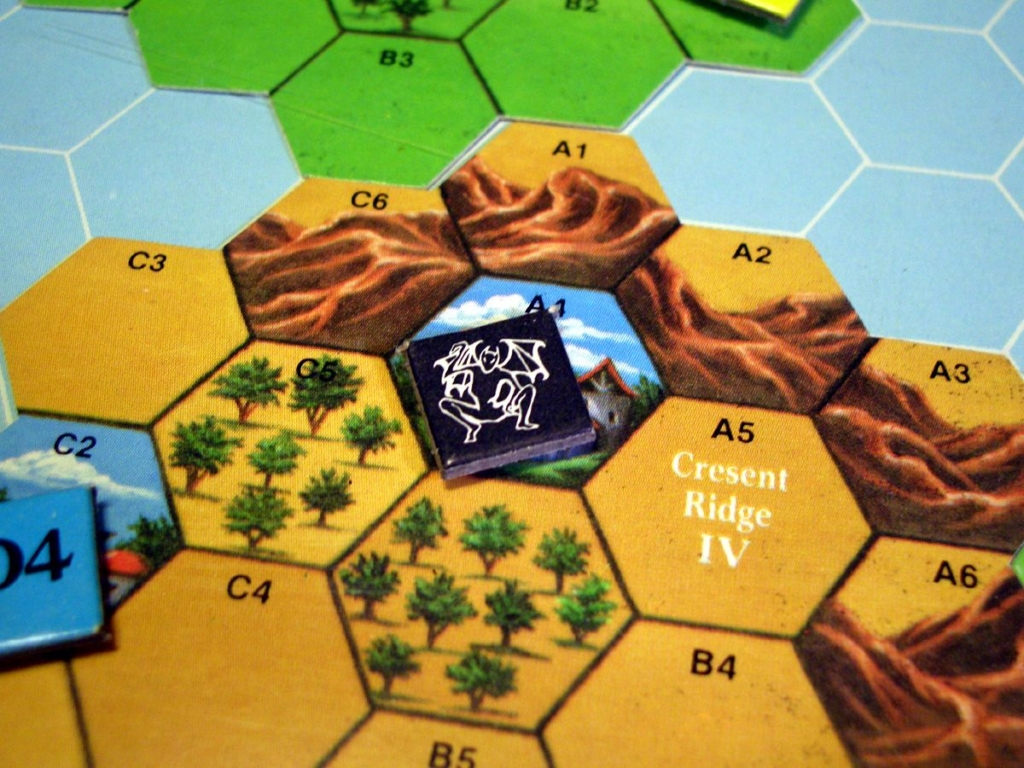 It’s got a great theme and I want to like it so much more than I do. The one thing the game does really well is the number of encounters. There are tons of tasks (even though they are all bad) and events, random encounters and specific encounters based on your location (which we didn’t cover). So while each game might seem different thematically within the lore of the story, it is still just a series of fetch quests. Plus overall, it just drags out and feels randomly unfair in too many ways.