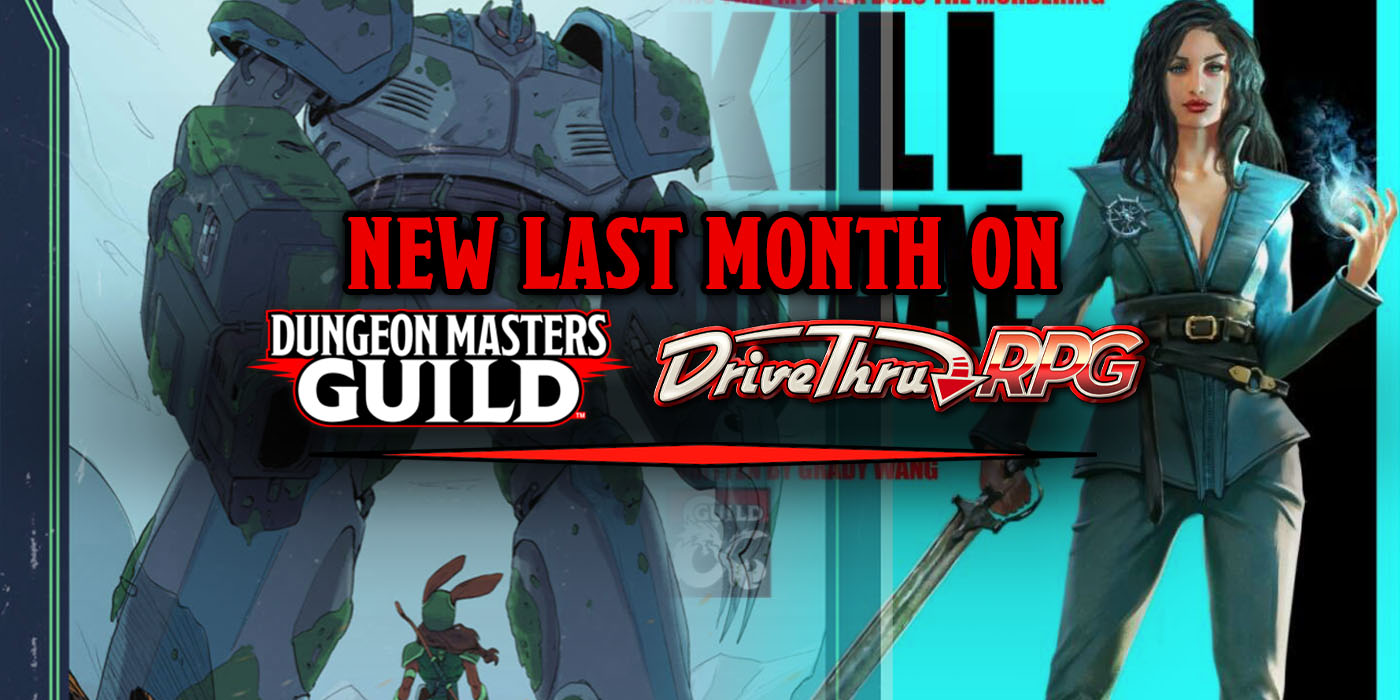 Giant mechs, rock n roll road trips, nd a floating pirate jail are just some of what you could find last month on DMs Guild and DriveThru RPG. 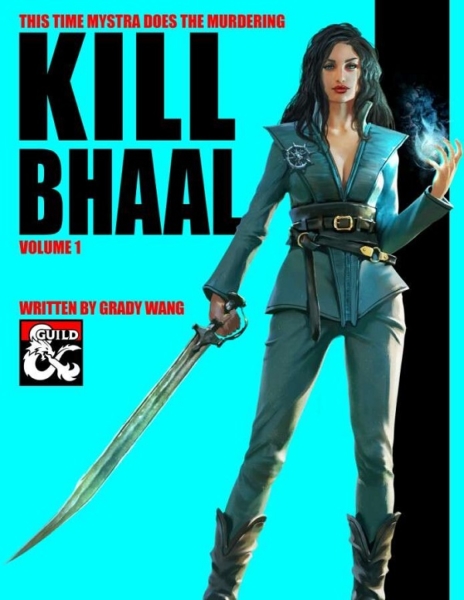 “Mystra is tired of getting murdered. Whether due to the scheming of her fellow gods or the boundless greed of mortals messing with magical forces beyond their understanding—or just Helm being an obdurate jerk—people keep killing Mystra, and she’s over it. Since murder is the domain of a specific god, there’s one obvious solution:

֍ Tackle a 4-5 session level 20 adventure!
֍ Team up with Mystra, God of Magic, to kill Beshaba, God of Misfortune!
֍ Combine mechanics from early encounters into a climactic final battle!
֍ Take the first steps toward ascending to godhood!”

This adventure is SO COOL, you guys. If you’re a fan of Kill Bill, this high level adventure will be right up your alley. Between in-jokes and a steady cinematic-esque build up, this adventure plays like you’re living through one of your favorite movies. Plus, there aren’t nearly enough games for the ultra high level characters and this will give you a solid four sessions to really enjoy their powers.

Sea Prison of the Furies 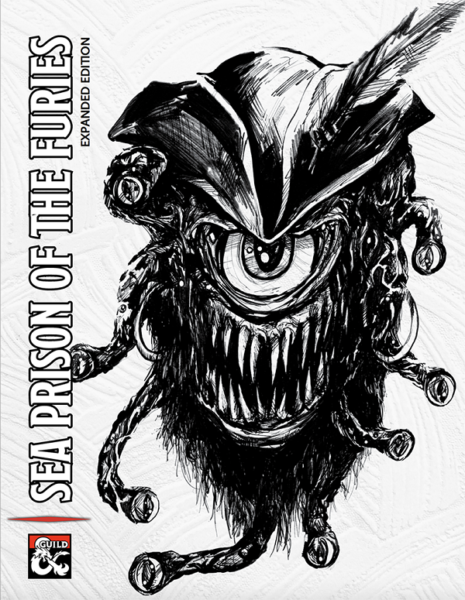 “Your ship is lost! Having hunted a crew of pirates to the middle of the ocean, your crew engaged in a terrible sea battle, and now both your ships are headed for the deep.

In the distance, you spy a cluster of vessels huddled together. As it turns out, the Empire had lashed together a dozen aging men-of-war to form a massive flotilla of prison hulks — non-sailable ships where prisoners can be left to rot.

But instead of accepting their fate, the inmates have formed tribes and begun to wage war on one another. Now, your only hope is to make your way from one end of the floating prison to the other in time to catch the next supply ship home – assuming the Empire’s worst offenders don’t get you first!”

This is such a great concept for a game. In fact, this would be a great concept for a story, so the fact that we can just join in and play through it is an absolute treat. Jailbreaks in games always add a chaotically fun dynamic, and this has it built right in from the get-go. And is that beholder a pirate? I’m not sure but I can’t wait to find out! 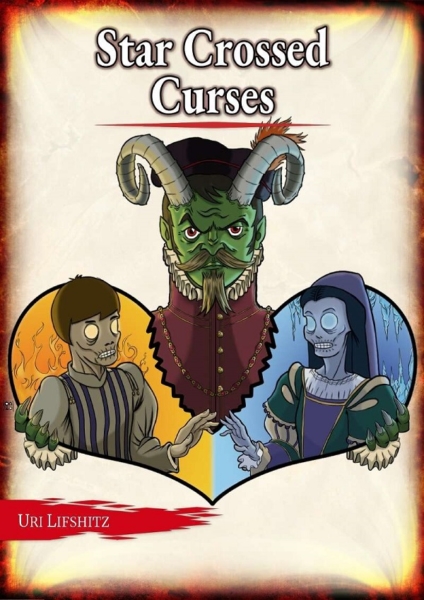 Enter Verona and Investigate what caused the Capulet mansion to sink underground and become a cursed hellscape. This adventure is designed for characters around the 4th-6th level.

Play as your characters or use the pre-generated characters (including Mercutio the tiefling warlock, Rosalind the elven wizard, Balthasar the halfling rogue, and more).

You don’t need to know Shakespeares’ Romeo and Juliette to enjoy this dungeon dive but it helps :-)”

The only way this one could have had my number more is if it was based on Twelfth Night instead of Romeo and Juliet. Between the vague historical aspects and the dramatic flair, it’s no wonder why tabletop RPG enthusiasts and Shakespeare nerds have a fair amount of overlap, and Star Crossed Curses finds a place right in the center of that venn diagram. 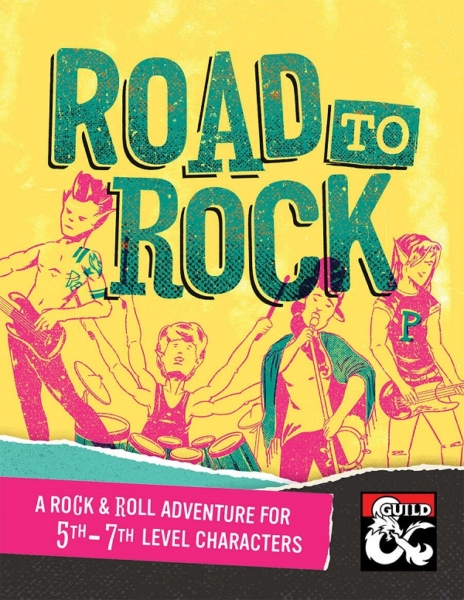 “Join Zayne, the half-unicorn elf, on their quest to discover a secret concert with their favourite band, Phantom Bulette.

Designed as a travel adventure, this module can be easily plugged in to your campaign, fitting into any generic forest. The adventure focuses on exploration and social interaction, celebrating the joy of a rambunctious night out exploring with friends. Road to Rock is optimized for 5th to 7th level but easily scales down to lower levels, with combat adjustments suggestions provided.

Includes two potential endings, custom magic items for Magic Mouth Records and Record Players, hand-drawn battle maps, and an excerpt from Behind The Bards all about the elusive rock band, Phantom Bulette!”

Sometimes you don’t want to take your game too seriously, so you go on a fantasy rock and roll adventure to see your favorite band live. This is the perfect, silly game for a low key game night and it comes with everything you could possibly need including maps and multiple endings. Hop in the mural van, it’s time to rock.

Blood on the Ice 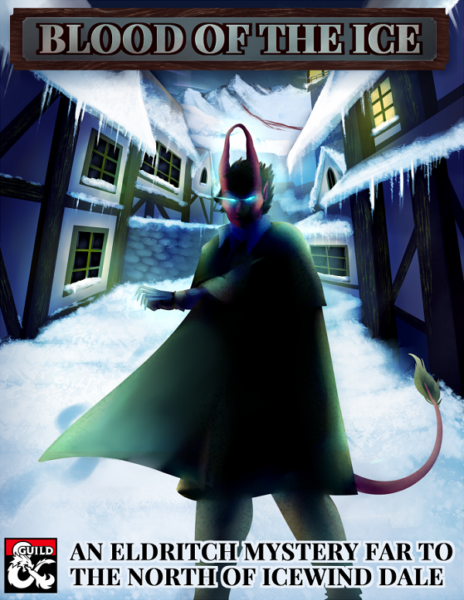 “The unease penetrates deep in the heart of the town of Wildereach. Amalgamous bodies have been found, frozen, roaming, howling. A cloaked figure looms, suspected of snatching townsfolk when the midnight sun hits its darkest points. A creature of the deep tries to stop all that enter it’s domain. Many strange happenings, here in Wildereach, is something bigger at play?

‘It’s truly awesome to see one of the most exciting artists turn their talons to writing…cartography, layout, EVERYTHING besides editing! It’s a phenomenal achievement and magical to see the strange beauty and earnest whimsy to their mystery horror! Bravo!’ – CurseOfSebs

Blood of the Ice is an adventure for tier 2 level characters, and includes:

Most of the modules and adventures I’ve singled out this month felt silly and fun, but this is a little darker and more intense. if you’re on the lookout for a winter themed horror mystery game, this is the adventure to sink your teeth into. Topping out at four-ish hours, it’s the perfect single session game for these long December nights. 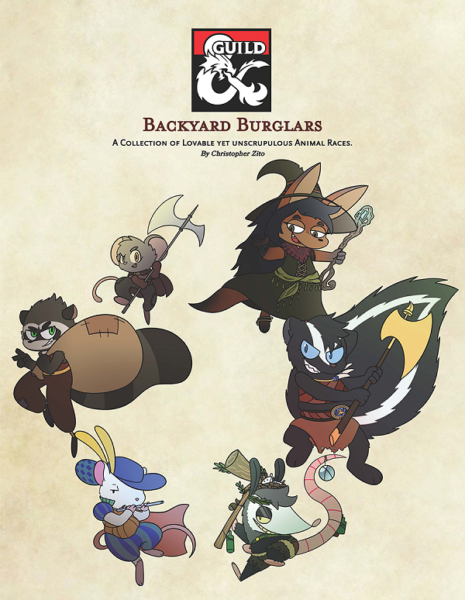 Looking for setting friendly animal races to place into your game world? Does the idea of playing as a race of animal-folk based on not one, but six kinds of critters you’d find in your garbage at 2AM sound fun? Want to play a race that can bite, claw, scratch, scrape, steal and even stink up in a fight?

…Wanna be the Trash Man?

Then Backyard Burglars might just be what you’re looking for!

Along with the base race this PDF also includes:

– 6 new playable anthropomorphic races based off the following animals;

I want to play a possum folk and I may have to re-write an established character to do it. There are a ton of weird and cool races in D&D so why not add a few more? You want to be a trash bandit? Of course you do! How about a stink cat? Let’s do it! I usually aim to have fun with D&D and making the silly unpopular animal character of your dreams can absolutely be part of that. 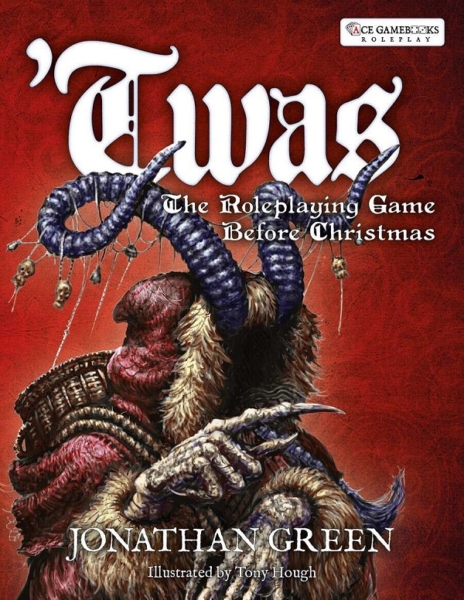 “’Twas the night before Christmas, when all through the house Not a creature was stirring, not even a mouse…

That is until Krampus the Christmas Devil turns up and abducts Santa Claus, even as he is delivering presents to the sleeping household. But as the old goat is trussing him up in a sack, Saint Nick draws upon the magic of Christmas to bring a group of Toys to life.

Charged with rescuing the jolly old elf, the party sets out to save Santa before Christmas Day dawns and the cruel, birch-wielding demon usurps his position – taking his place forever!

What follows is an epic quest, as the Toys battle their way through first the house, and then a wintry wilderness, before finally facing off against Krampus and his minions at the heart of Father Christmas’s weaponised polar workshop.

He knows if you’ve been bad or good, so be good for goodness’ sake…“

You may not think a Christmas themed module would have come out last month for me to mention, but here we are! Just in time for the holiday season ‘Twas has you chasing down Krampus to save Santa in an epic adventure through showy wilderness and toy battles. It’s like if those classic claymation movies were just a little darker. 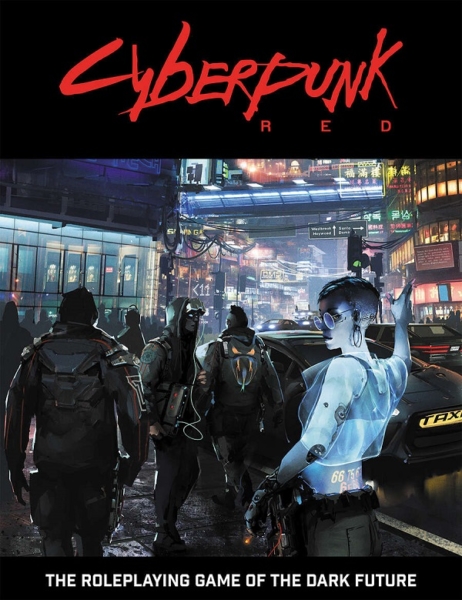 “Cyberpunk RED is the latest edition of the classic tabletop roleplaying game of the Dark Future and encompasses everything you need to explore the post-War world of the Time of the Red, including:

With Cyberpunk 2077 right around the corner, Cyberpunk Red is here to fill in some time and let you really immerse yourself in the high tech dystopian hellscape that is the future. Will you be a Netrunner or a Fixer? What’s the first piece of cyberware you’d need to get? 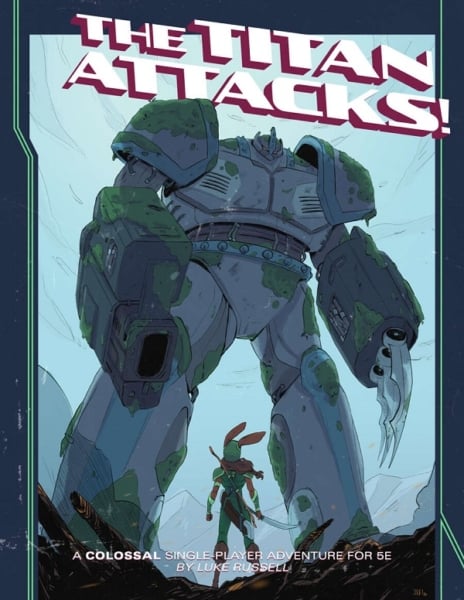 “An action-packed adventure for one GM and one player.

A colossal war machine emerges from the wasteland, unleashing its devastation against the town of Tarian. The fate of Tarian rests on the shoulders of one adventurer—but will they be able to bring an end to the Titan’s rampage, or will Tarian be reduced to a mass of steaming rubble?

The Titan Attacks! is a 5e-compatible adventure designed for a GM and a single character. Throughout the adventure, the adventurer will infiltrate a war machine, disrupt its systems, and defeat its pilot before Tarian is destroyed.

Inside this product you will find a 4-6 hour single-player adventure for a character of 4th-6th level. While designed for a single player the product also includes instructions to adapt the adventure for small parties.

Also included is a unique battle map depicting the inside of the colossal war machine designed by Artur Kurasiski. Fight your way through chambers filled with deadly encounters, as well as seven brand new 5e-compatible monsters!”

When the giant war mech comes out of the wastelands, what will you do? This game is 5E compatible and designed for as few as one players, which is perfect for some of us living with one person and not meeting up with the D&D group for the foreseeable future. It’s a unique, adaptable adventure that makes me wonder what the Iron Giant would have been if the Giant hadn’t been so gentle. 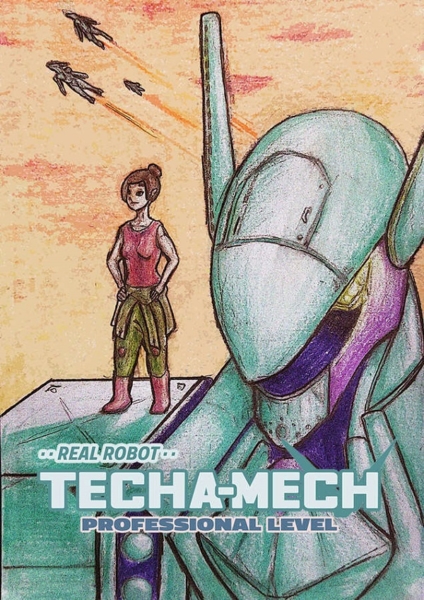 “A two page mini game of the Real Robot Mecha genre in the style of Robotech and Gundam. Design your own mecha and take part in dangerous missions in your special pilot division.”

Mini games like this will always be some of my favorites. They’re easy to learn and play, easy to pick up at a moment’s notice, and somehow the shortest games manage to be come of the most creative out there. Build your own mech and go on the anime style adventures we only daydream about.

What new games or adventures have you added to your collection recently? Did any of my top picks make your wish list? What’s next on your TTRPG shopping list? Let us know in the comments! 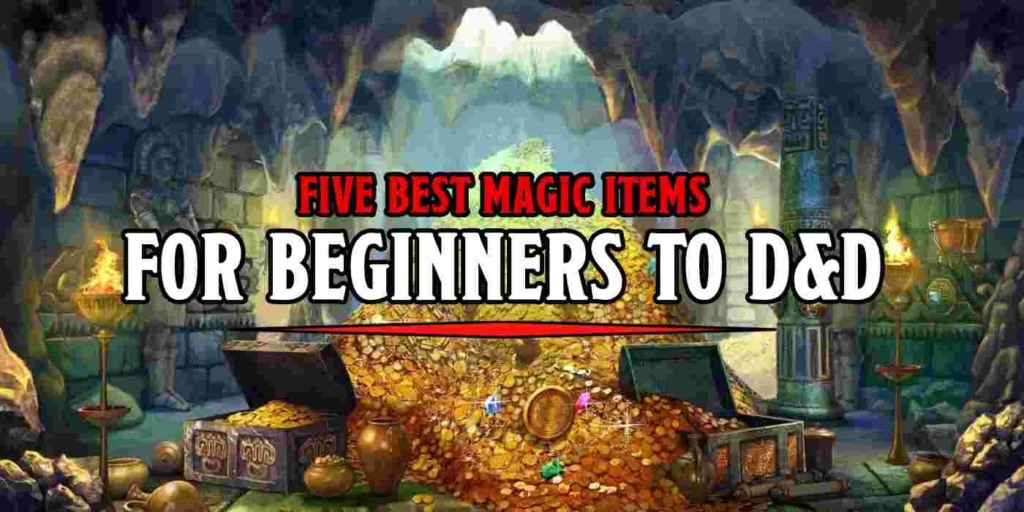