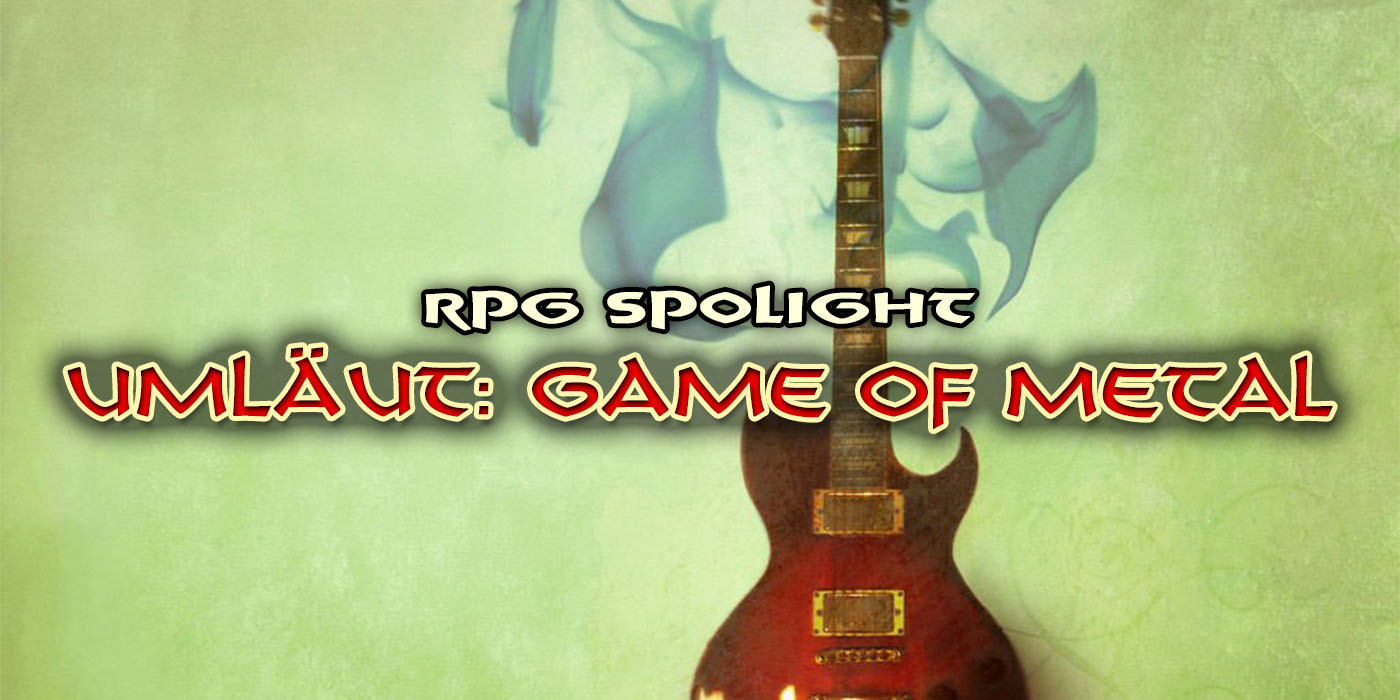 Advertisement
Tune your guitar and warm up your vocal chords, this week we’re all joining bands and seeing who rocks the hardest with Umläut: Game of Metal. 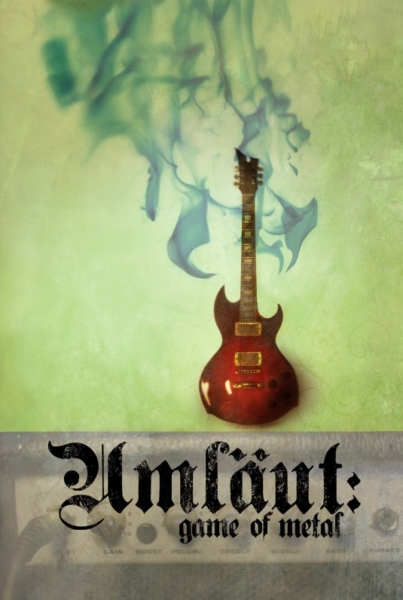 Who hasn’t daydreamed about kicking all of their responsibilities to the curb and starting a band? Even without the miniscule chances at a glamorous lifestyle or fortune, the creature freedom can be enticing. But then we remember that making something creative from the ground up is hard and takes a lot of work. But you know what isn’t hard and doesn’t take a lot of work? Sitting down with a bunch of your friends and playing Umläut: Game of Metal.

Umläut is a light rules, GMless and diceless game where storytelling and scene describing are key all circling the concept of forming metal bands and competing to be the best one around.

As a simple game Umläut has relatively simples rules and stats. Each band has the stats Hope, Cash, Ego, and Fanbase as well as performance traits Power, Stagecraft, and Technique. And the nice thing about describing a game that exists within our reality and describes a concept that most of us are familiar with is that I don’t think any of those stats or traits really need to be explained. The end goal of your band is to have the smallest possible discrepancy between your Ego and Hope as that number determines the winner… and bands with inflated egos have a messy tendency of splitting up. 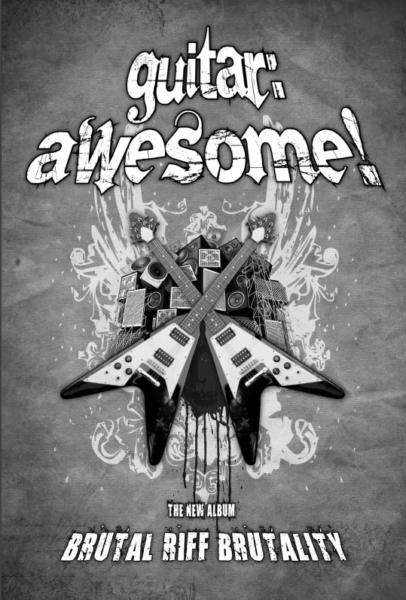 Points in these stats are earned throughout gameplay, and gameplay is comprised of a series of scenes. So how are characters created? Well, that can be as in depth and creative as you want. Character creation mostly involves describing your band, their name, their style, the kind of metal they play, and maybe even who all of the band members are. You don’t need to go to deep into it if you don’t want to, but trust me, having a good handle on your bandmates will make describing how scenes playout so much more fun and immersive. And if you’re having a hard time coming up with all of them, just lowkey recreate Dethklok.

GMless games can always be a bit of a hard sell. After all, if nobody is in charge what separates a game like this from schoolyard pretend where whoever says “Nuh-uh!” loudest wins? Well, Umläut has a system that reminds me a little of joining in on anime convention LARPs where games of rock paper scissor were played in place of rolling dice. Only in Umläut players use a deck of cards. Moving in a clockwise circle the band chooses the kind of scene they would like to play out and then the band and their roadie (the player to their left for the purposes of the turn) draw playing cards. Whoever has the most black cards wins while whoever draws the highest card determines gets to determine and describe how the scene plays out and whether it has a positive or negative outcome. Some scenes require a certain amount in your Cash stat to play through, some scenes allow competing bands to try and force a split, and failure in scenes results in a raised Ego (which again, you don’t want to allow to get too high). It’s a little improv and a little cooperative storytelling but still manages to be competitive. 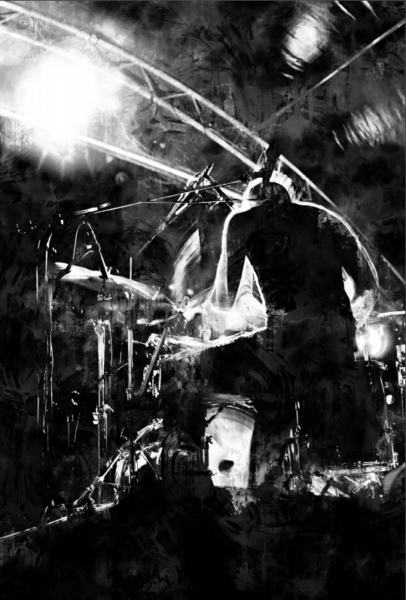 Sessions usually last about three or four hours and end in a final round of gigs, or what I like to think of as a battle of the bands. Egos are subtracted from Hope and the band with the lowest discrepancy rocks on to see another day. It’s short, simple, and perfect for an unclaimed one shot or those days when you’re having some drinks with friends and someone says, “Hey, let’s play a game.” There is no setup, no one person responsible for coming up with a story, and if you have most of a deck of regular playing cards you already have everything you need. And honestly, with fewer than 75 pages and at an indie game price point, this is the sort of low-risk high-reward game that’s almost a no-brainer addition to my PDF folder or game book shelf.

If you want to make a metal band of your own, you can find Umläut: Game of Metal’s listing here on DriveThru RPG.

Have you played Umläut: Game of Metal? Will you be picking up a copy for yourself? What sort of metal band will you create? Let us know in the comments! 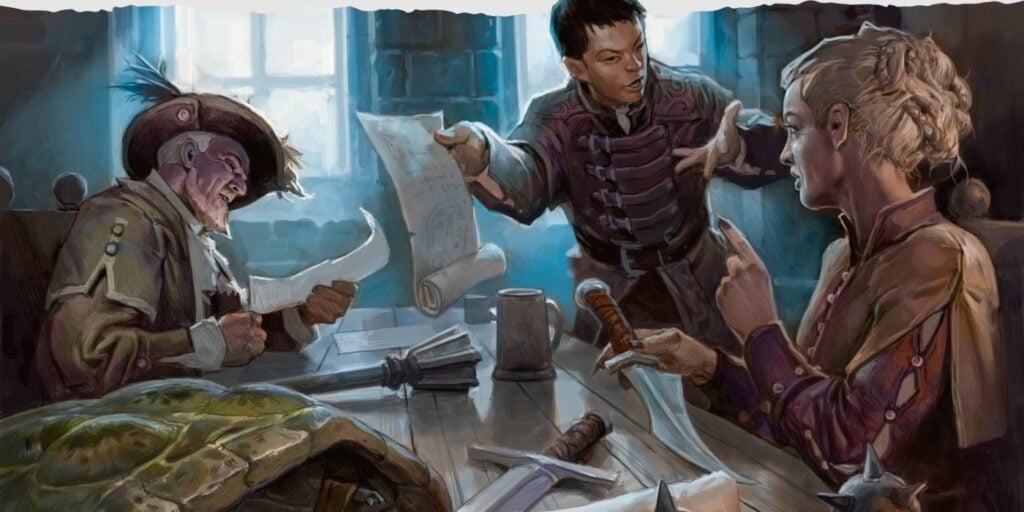