Coyote: A Bluffing Game Where No One Knows The Whole Truth 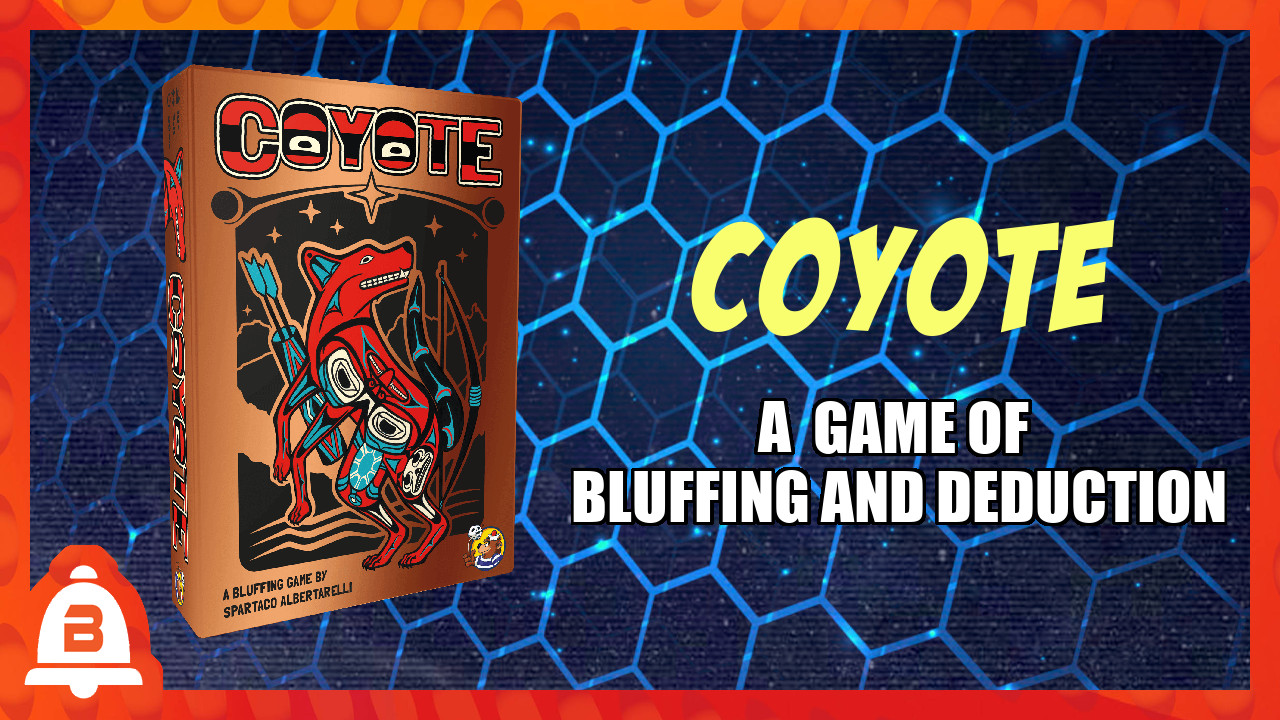 Deception is not everyone’s forte. Lying can be tough for a lot of people. But what if you weren’t sure if you were lying or not?

Tons of party games out there rely on a bluffing mechanic. They expect you to put on some façade and lie about your intentions, alliance, or overall goals. This type of gameplay doesn’t appeal to everyone and those people tend to find overt lying to be tedious and difficult. I can say that I relate to those people, and that’s because I’m good at lying.

But for those people, today we have a bluffing game where no one quite knows the whole picture and everyone is equally confused: Coyote.

Be sure to watch the whole video for a fun and interactive element at the end! 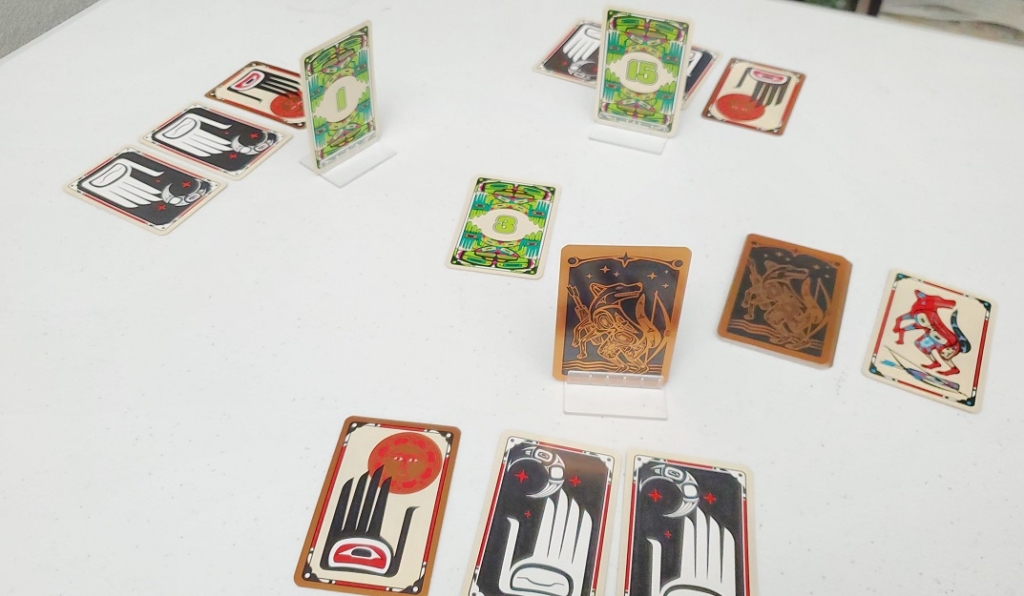 Each round, every player is a number card, which they do not look at. They place their card in their card holder stand, facing away from them. So players can see everyone’s card, except their own. Then 1 additional card is placed facedown in the center of the play area, hidden to all players.

Pllayers go around the table, making a bid at what they believe the total value of all cards in play are, without going over the actual value. So, in the above example, there is a 1, and 15, and a 3 visible. Your card and the central card are hidden to you. So, an initial bid of 19 is safe. However, with the knowledge that cards range from -10 to +20, maybe you could bid 25 instead, if you expect the actual value of the cards is not over 25.

The play continues around the table, with each player increasing the bid with whatever value they think is reasonable, using the information they have available to them. However, if a player thinks the latest bid is greater than the actual value of the cards in play, they can challenge the bid. When this happens, all cards are revealed. If the bid is, in fact, over the actual value of the cards, the player who made that bid loses the round, and the challenger wins. Otherwise, the reverse. Then both players flip a Peek card face up or face down, whether they won or lost, respectively.

Players seeking to gain an edge are able to flip one of their Peek Cards facedown in order to peek at the facedown card in the center of the play area. This can be very useful information, but remember players are eliminated when all their Peek Cards are facedown. 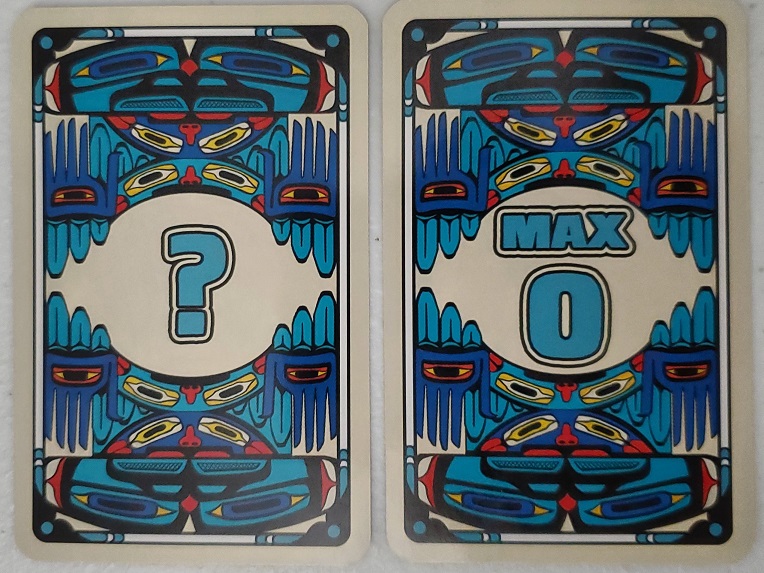 The ? and Max 0 cards are mixed in with the other number cards. The ? card is replaced with the top card of the deck as soon as a challenge is called, adding a bit of randomness to the bid. The Max 0 card changes the value of the highest valued card to 0, potentially drastically lowering the bid, making it much easier to win a bid.

The game also offers several optional rules which they recommend you use once you get a handle on the game. The first optional rule brings all players in on a bid challenge. Once the challenge is made, each player simultaneously points to whichever player they think is correct in the challenge. All players who guessed correctly win the round and flip up a Peek Card, and all players who guessed wrong lose, and flip a Peek Card down. 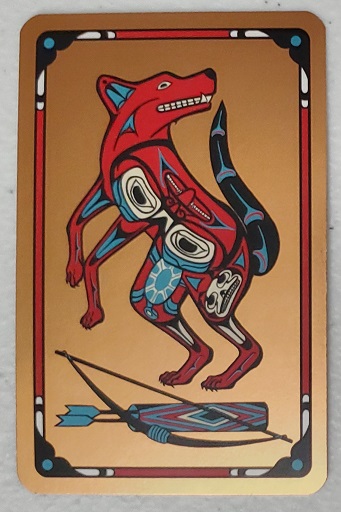 The second optional rule involves the Coyote card. This card is given to the loser of each round. The holder of the Coyote card can, once per round, use it to peek at the top card of the deck of number cards, then add that card facedown, to the center of the player area. During a challenge, both cards will be considered in play and counted towards the total value all the cards.

And that’s basically everything about Coyote. It’s a very quick to learn game with a great amount of deduction and bluffing without requiring the players to lie, cheat or steal. Additionally, I love the aesthetic of the game. For better or worse, there are several cultural representations of games that are, let’s say, very often utilized. The “story” of this game is based on a Native American myth about the titular Coyote. Additionally, all the art is representative of those cultures as well. So, it’s great to see themes that don’t get much attention in media. 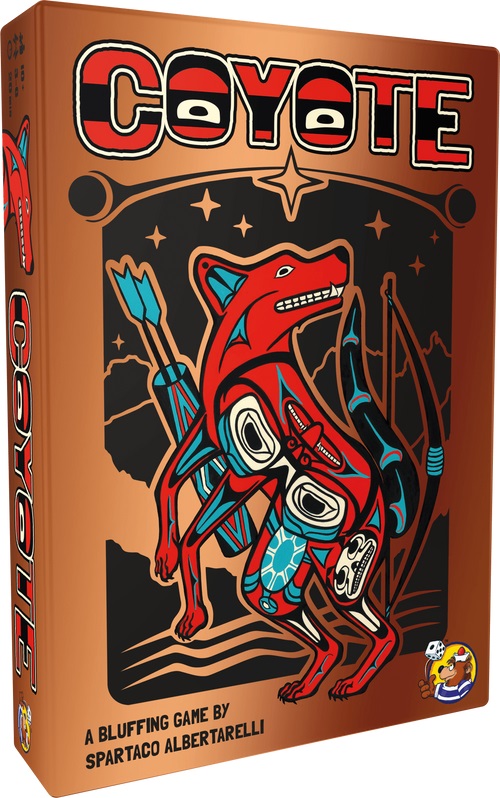 Once Coyote crossed the river with his friends. But he was carrying too many things and almost drowned before Bear pulled him out of the water. Poor Coyote had lost everything. They sat down by a fire to dry off and rest. Coyote became jealous of the other animals, because they still had all their things. So he challenged them for a bluffing game to win their belongings.
The other animals agreed to the challenge as they thought Coyote would never win. After all he is known to never tell the truth. But in this game everybody has to lie, because no one knows the truth…

Here are the results to the game in the video!
If you didn’t finish the entire review video, watch that first. Also, why didn’t you watch the whole video? 😢

Author: Matt Sall
Matt has loved games of all kinds his whole life: board, video, war, roleplaying. He's worked as a writer for BoLS since 2017. He's worked as freelance editor for board game rulebooks and has designed many of his own games as well.
Advertisement
Board Games Card Games Rules Tabletop News
Advertisement

"Stardew Valley: Board Game" Perfectly Captures The Magic Of The Video Game 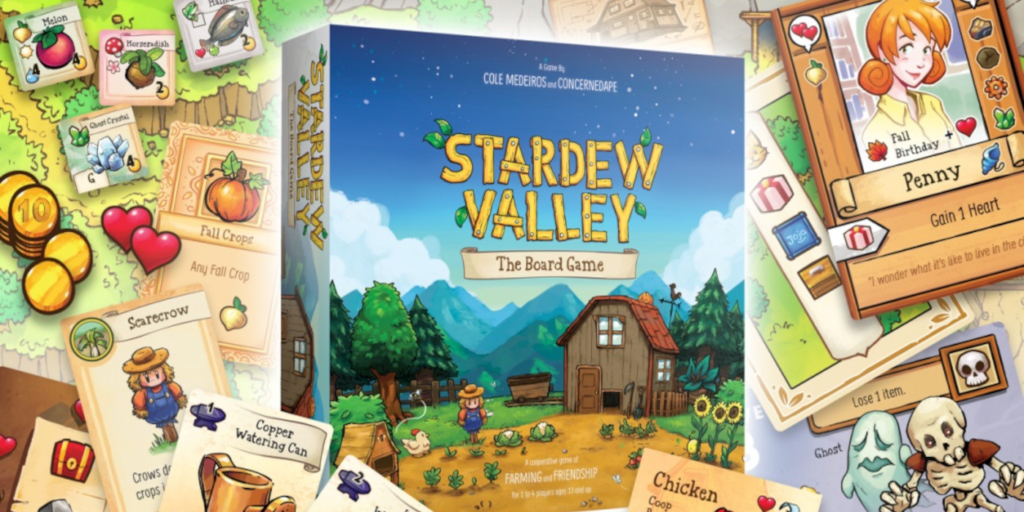