Spell points? Eldritch Blast as a class feature? The days of the Warlock dip might be over in Advanced 5th Edition. See the latest from Level Up.

Warlocks are one of the most played classes in 5th Edition, and with good reason. They’re like the magic version of the fighter–everything they have just works. There’s not a lot of complicated minutiae you have to keep track of, they get the best attack cantrip in the game, and can continue to tweak it to make it just as potent as a fighter in higher levels. In fact, their unique cantrip is so good that you have to take an entire subclass just to make fighting in melee on occasion be as viable an option. 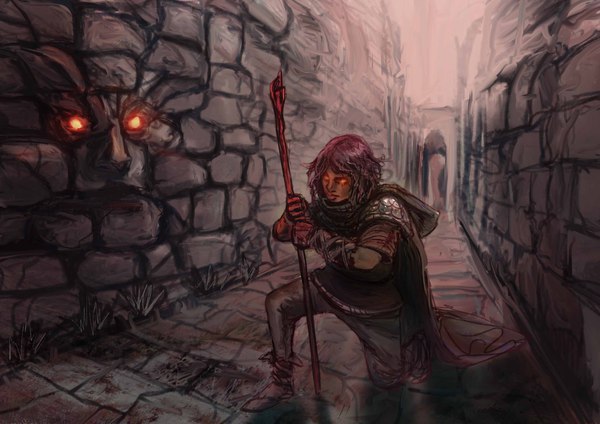 And even then you’re better off casting Eldritch Blast. But the latest iteration of the Warlock for Level Up, the “Advanced 5th Edition” ruleset seems like it wants to change the paradigm of Warlocks, altering just enough under the hood to make them work the way they have, but with more flexibility and less frontloading. Let’s take a look at the latest from Level Up.

First things first, Warlocks are still adventurers who forged some kind of arcane pact with an entity beyond the ken of mortals. As a result you get spells and other powers, but here’s where we see the first of the major changes to Warlocks. They no longer get a limited number of spell slots that are used to cast spells at the highest level–so if you’re a 3rd level Warlock, you’re not automatically bound to cast 3rd level magic missiles or whatever–instead, they get Spell Points.

Now, there’s no telling if this system sticks around, Level Up is still in development and they are very much seeking feedback on how this new class plays. But the shift to a spell point system with a steadily increasing number of spell points means you’ll lose out on some progression but will make up for it in terms of flexibility. Now instead of having two spell slots forever (11th level is basically forever) you get a number of spell points that allows you to basically always cast two of your highest level spells, but you could also cast a number of lower level spells instead.

That’s big change number one. Big change number two is also spell-based, and it’s that Warlocks are no longer exclusively a Charisma based class. You can choose Intelligence, Wisdom, or Charisma to be your spellcasting ability at 1st level, and you’re stuck with it. So no more Charisma based only–you could be a Wizardlock or a Clericlock, though you might want to hold off on multiclassing because…

The third big change is focused entirely on the other big feature for Warlocks: Eldricth Blast. Instead of it being a spell, it’s now a class feature–and that’s just the beginning. Eldritch Blast under the new system gives you three options:

Pick one at 1st level and you stick with it for the rest of your career. You’ll still find Eldritch Invocations, which are more varied and in greater number now, but you can still add your spellcasting ability modifier to damage with your Eldritch Blast, whatever form it takes, which means it’s still the best ranged magic damage feature in the game, and there’s no reason not to take it.

And like every other Advanced 5th Edition class, you’ll still get a variety of exploration knacks and special pact boons. The heart and soul of the class is in the Warlock Invocations though, so click below to check them out.