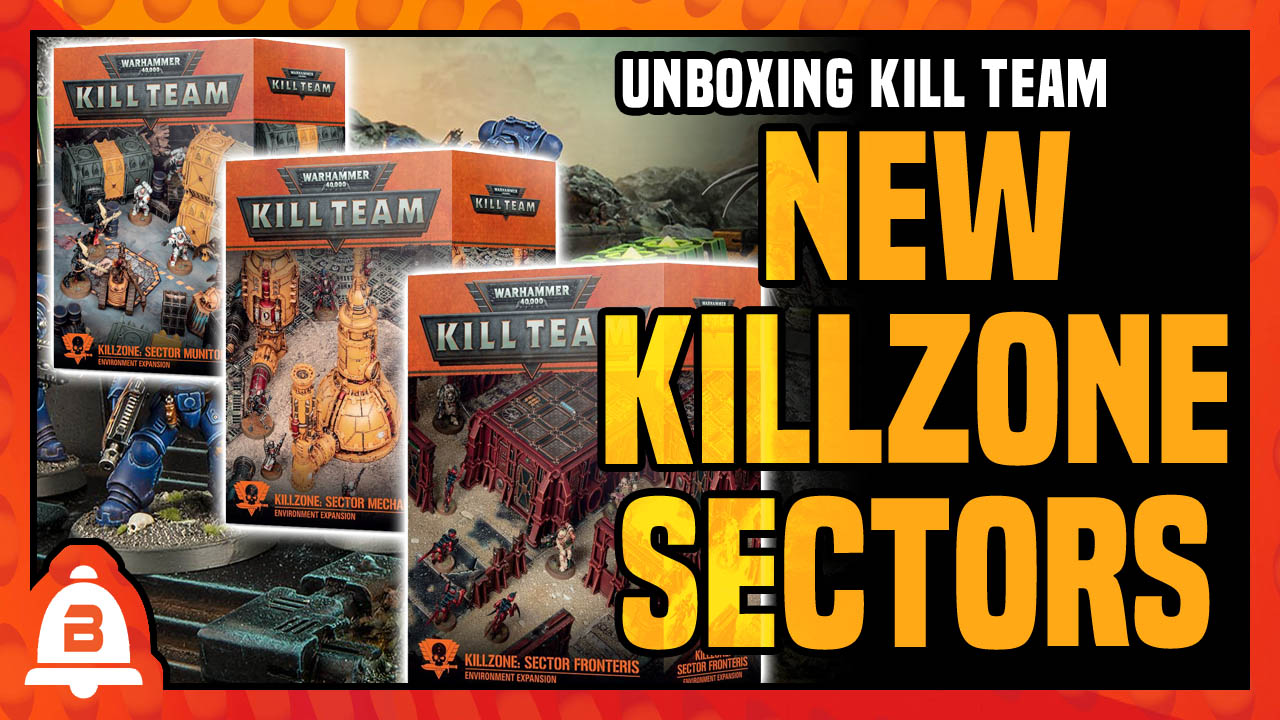 Looking for some new Kill Team Terrain? If you need a board’s worth of terrain in a hurry then these boxed sets will have everything you’ll need: 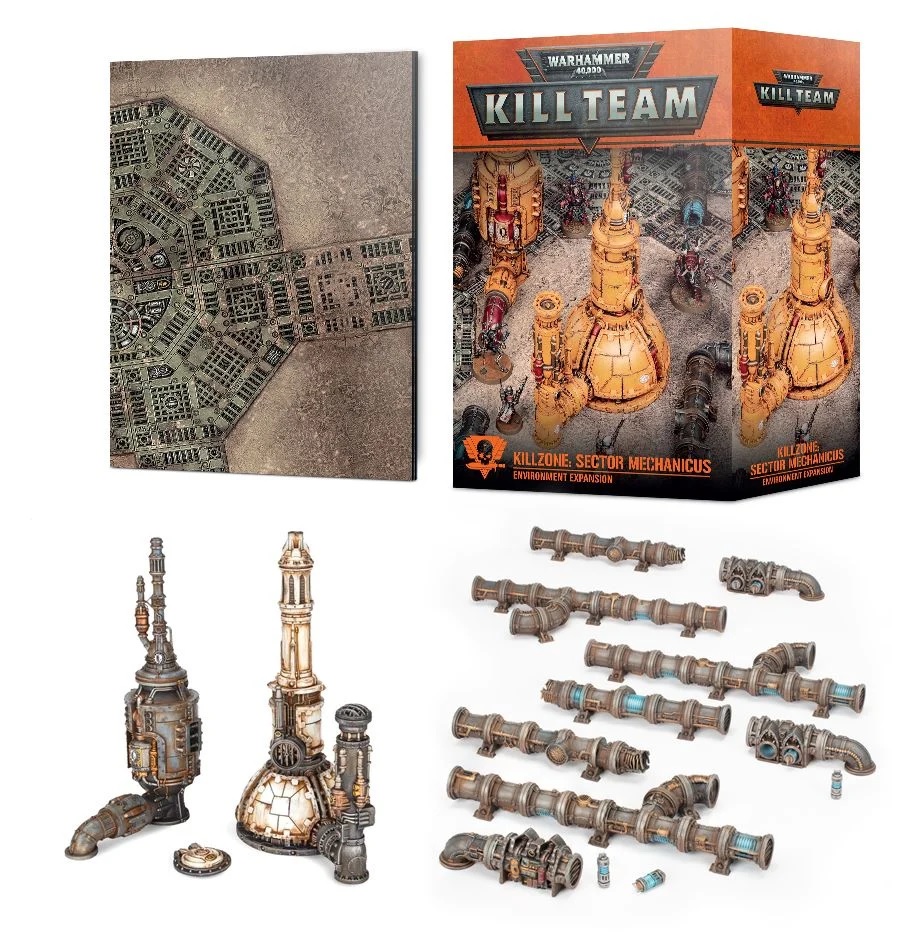 This set contains everything you need to create a Sector Mechanicus battlefield for games of Warhammer 40,000: Kill Team:

– Double-sided, fold-out game board measuring 22″ x 30″
– 10 large pipelines, three of which are broken, with ruined ends
– 2 smaller pipe elements which represent the beginning/end of a pipeline
– A variety of additional elements including junction boxes, chimneys, and silos which can be used in conjunction with the pipelines to form larger structures and denser areas terrain

This kit is great for anyone looking for some extra “scatter terrain” for their tabletop. The pipes are good for providing lots of movement/LoS blocking and to give your infantry cover. It’s also got those great looking relay pump things. Really, they could be whatever you wanted them to be, but they can be configured in a multitude of ways. And let’s not forget about the double-sided board – which is also different than the other two kits. 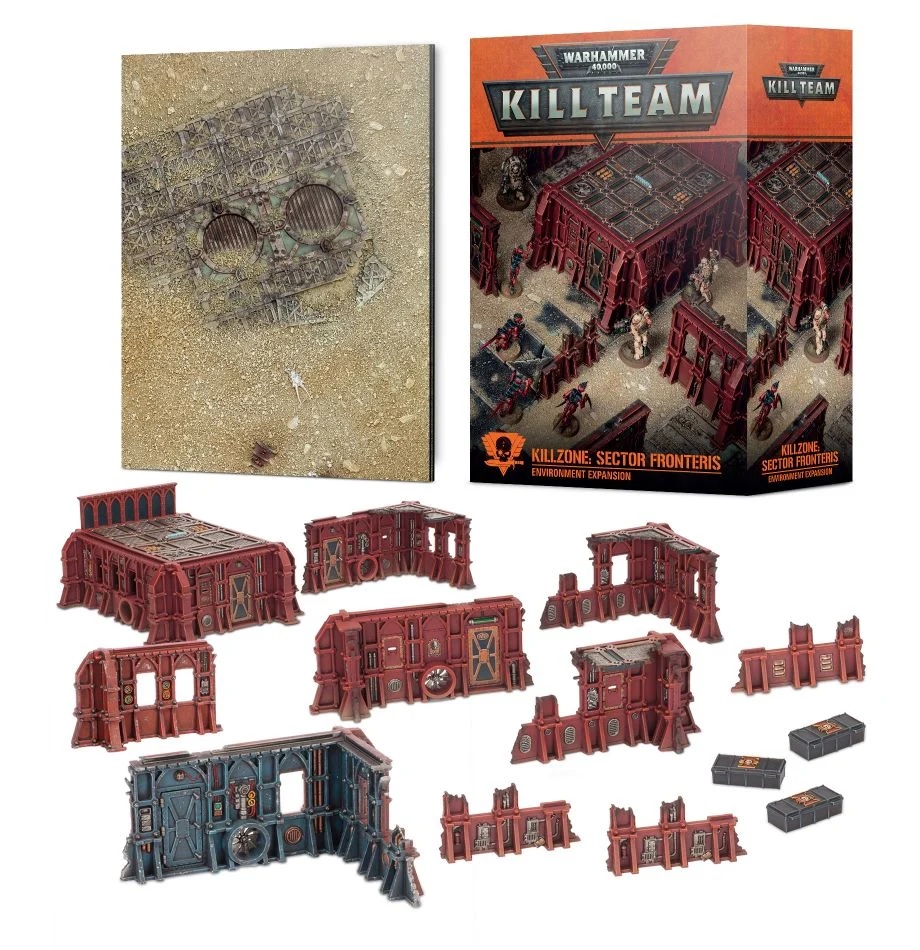 This set contains everything you need to create a Sector Fronteris battlefield for games of Warhammer 40,000: Kill Team:

This one is another really great kit. The wall sections are tall enough to give even vehicles some protection and it’s one of the RARE fully intact buildings of the Grimdark Universe. Seriously, how many kits has GW created with blown-out buildings for the 40k scale? Now think about all the kits with a non-wrecked building. Now compare those lists. It’s kind of shocking when you think about it.

Anyhow, this one is probably my personal favorite of the three mostly because the building sections DO block the most line of sight. That and we already have plenty of shipping containers from… 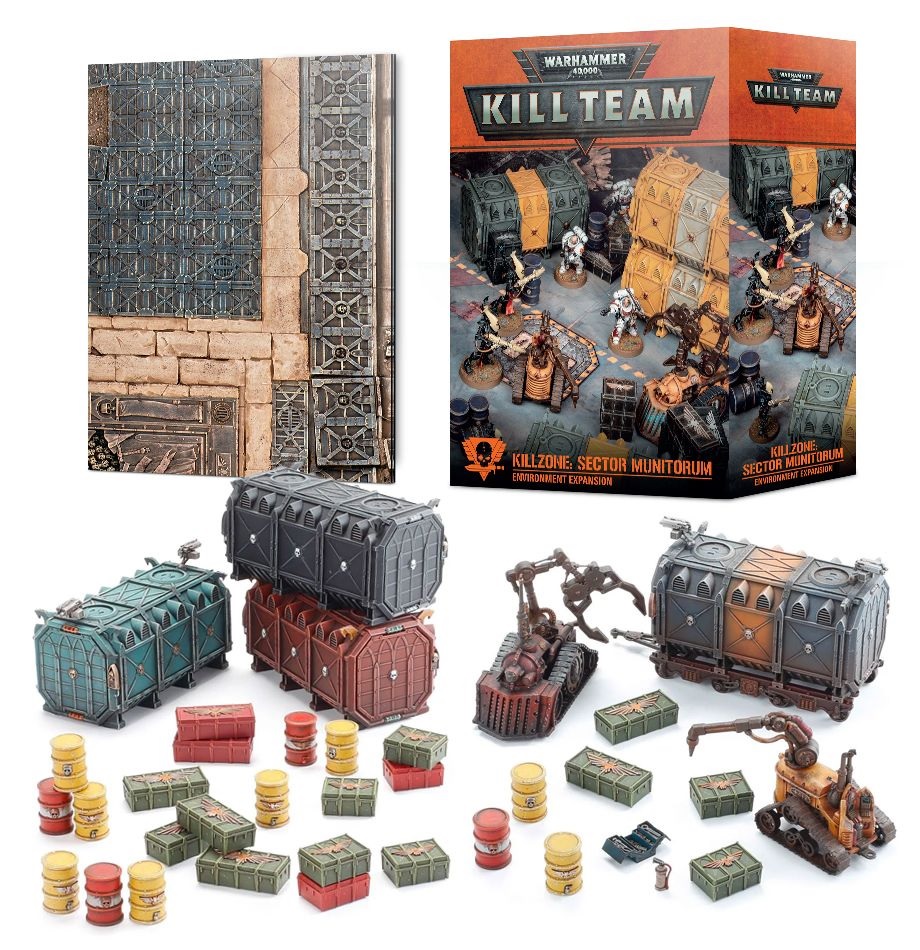 This set contains everything you need to create a Sector Munitorum battlefield for games of Warhammer 40,000: Kill Team:

The Shipping Crates are BACK! Yep – some of the most versatile terrain kits GW ever made are reboxed and once again available. What’s so great about the shipping containers is their placement on the tabletop is only limited by your imagination. You can do a lot of really cool stuff by stacking them or positioning them differently. You can even build them “open” if you wanted to or on rails. There are loads of cool things you can do with this kit.

And let’s not forget about the barrels or ammo crates. You can leave them as indivual boxes/barrels or you can glue them together or on a base/mdf board/foam to make your own scatter terrain chunks. It’s good fun. This is another solid offering for Kill Team.

If you needed a board and terrain and didn’t know where to start any of these three kits make for a great origin point for a terrain collection. Regardless if you’re playing Kill Team or 40k propper, more terrain in your collection is going to be a good thing!

All of these kits are out now from GW!

Warhammer 40K Next Week: New Demonic Model And The Book Of Rust