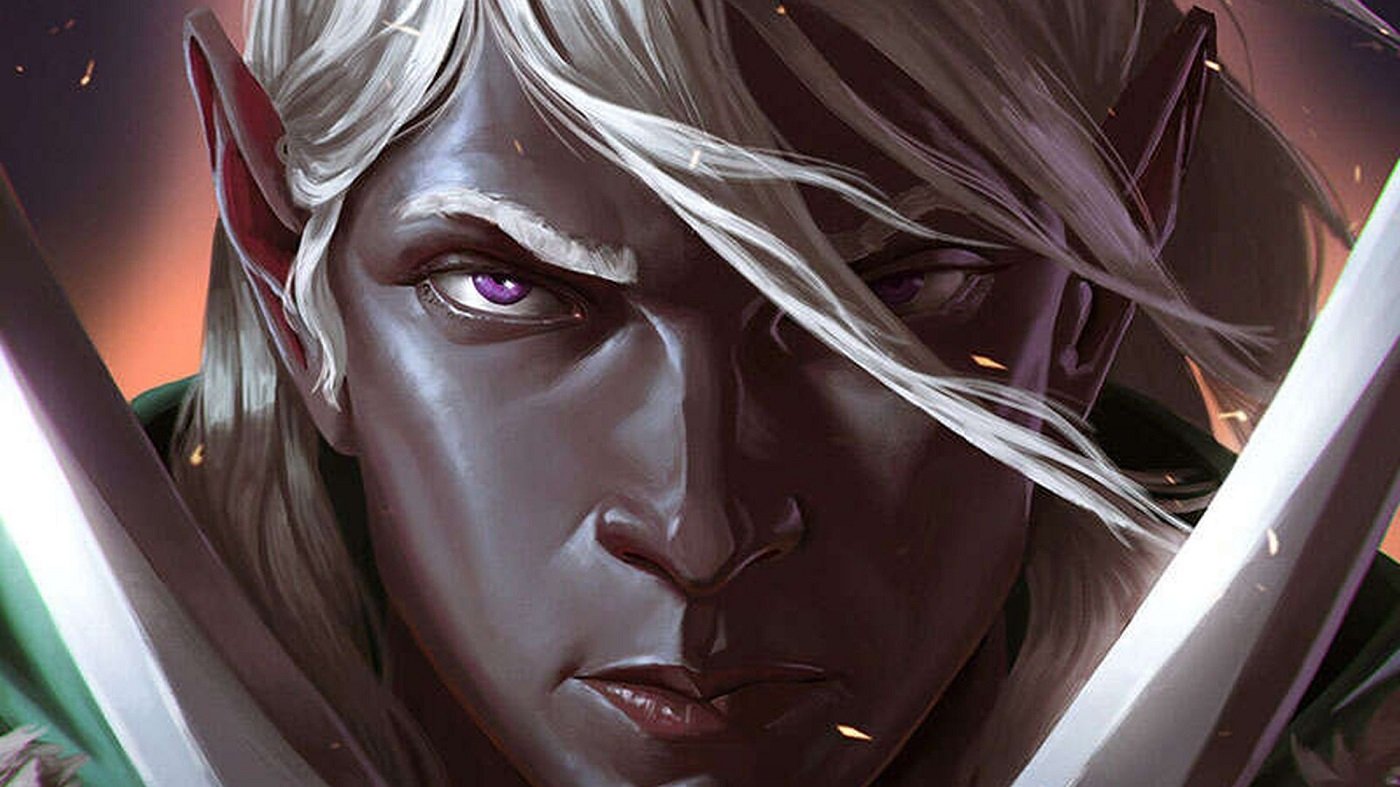 In all of Dungeons & Dragons, one name has come to represent two swords and a pocketful of memes: the brooding drow that is Drizzt Do’Urden.

Drizzt Do’Urden, star of the upcoming hack and slash game, Dark Alliance, is a rather renowned figure throughout the northern parts of the Forgotten Realms. But where does this dervish-like drow come from and what has he done? Let’s take a look.

Drizzt Do’Urden has lived a life of unexpected mercies. It all begins when was born in the Underdark in the city of Menzoberranzan. Like many, his family was swept up in the backstabbing, intrigue, and politics of the city. In fact, he owes his life to the byzantine machinations of House politics–the second son of house Do’Urden, Dinin Do’Urden, murdered the eldest brother Nalfein Do’Urden the night that Drizzt was born, sparing the youngest Do’Urden son from being sacrificed to Lolth.

This should give you an idea of the difficulties that Drizzt Do’Urden went through growing up in Menzoberranzan. But it wasn’t all horrible tragedy. While growing up and learning to fight, Drizzt befriended a magical panther named Guenhwyvar, which would end up saving his life when drow assassins came after him and tried to use Guenhwyvar to kill him.

At one point, he refused to kill a moon elf child and Drizzt’s father was sacrificed to Lolth to regain the Queen of Spider’s favor. After discovering this, Drizzt realized he needed to escape Menzoberranzan, but even that wasn’t enough. Vengeful drow had reanimated the corpse of his father and had sent him to kill his son. After destroying his father’s corpse in acid, Drizzt realized that the Underdark had nothing left for him, and he escaped to the surface. 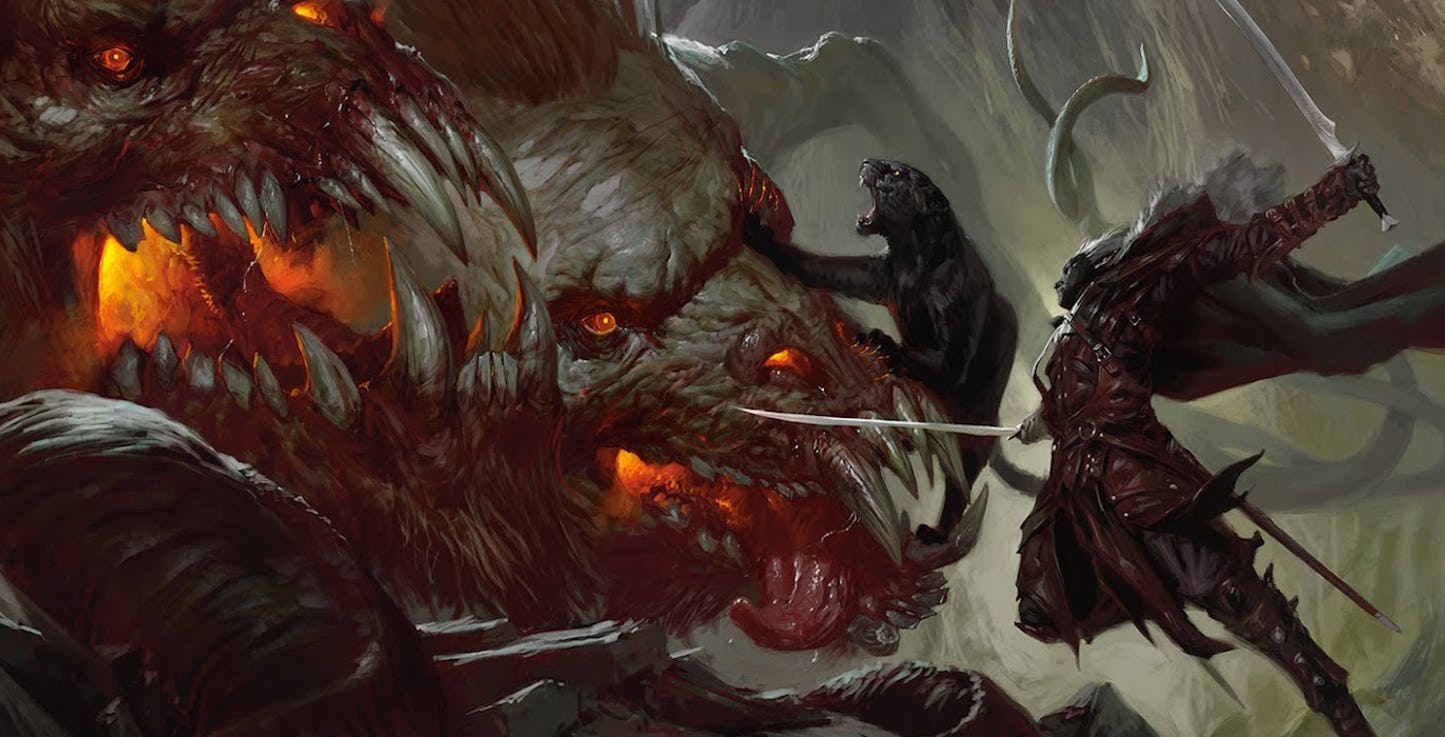 Once on the surface, Drizzt met with all sorts of misadventure, learned to become a ranger and met with his bravest battle companions: Cattie-brie, Bruenor Battlehammer,Wulfgar, and Regis. The companions found themselves wrapped up in intrigue in Icewind Dale. After becoming a respected hero there, his past came calling once more. Drizzt’s sister, Vierna Do’Urden kidpanned the drow, and killed Wulfgar in an attempt to regain Lolth’s favor.

Drizzt returned once more to the Underdark to deal with the figurative and metaphorical demons of his past, where he was captured and tortued, but eventually escaped, fighting in the midst of a war between the Underdark and the Surface. 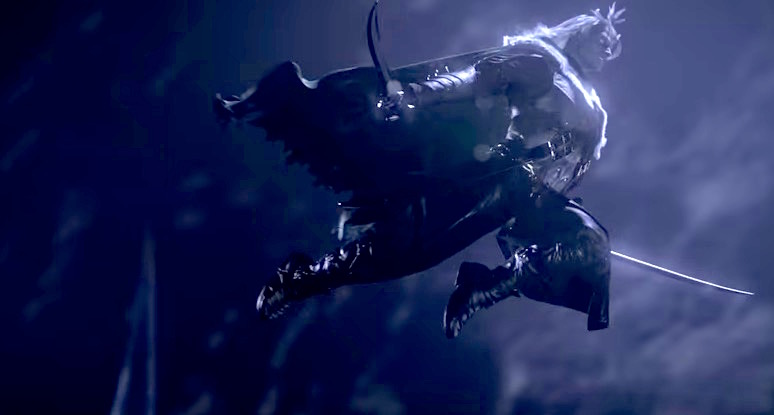 Of course that’s just the start of his adventures. Over the course of the years, Drizzt’s companions would all die–the Spellplague took the lives of Catti-brie and Regis, Bruenor died in the battle for Gauntlgrym, and even Guenhwyvar disappeared into the Shadowfell during the battle of Neverwinter, and Drizzt himself was mortally wounded in battle against some of his former allies from Icewind Dale. As Drizzt lay dying, his companions, returned to life by the goddess Mielikki, came to his aid and healed his wounds, reunited once more.

And that’s just the main story.