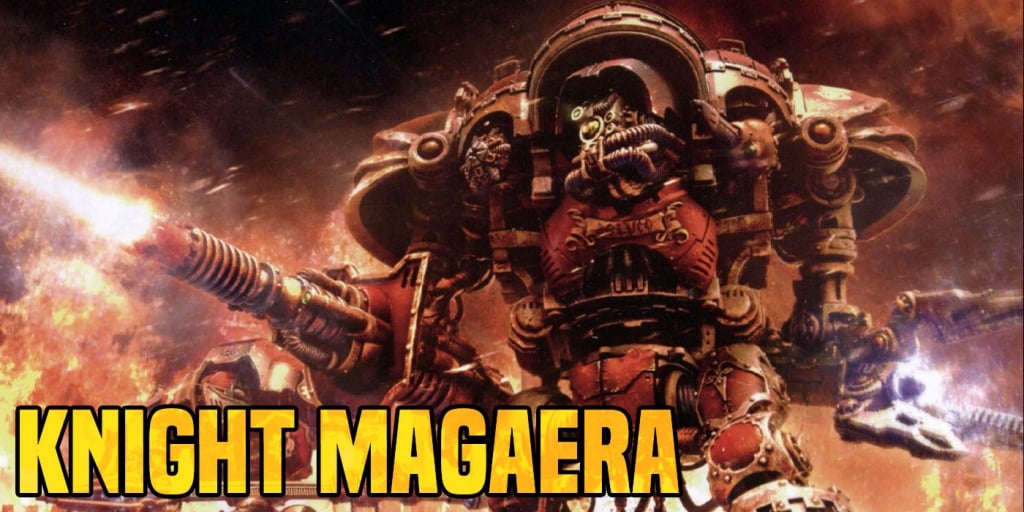 Hey everybody, Danny from TFG Radio here, and today, let’s talk about the super-tesla toting Knight that loves them sixes, the Questoris Knight-Magaera! 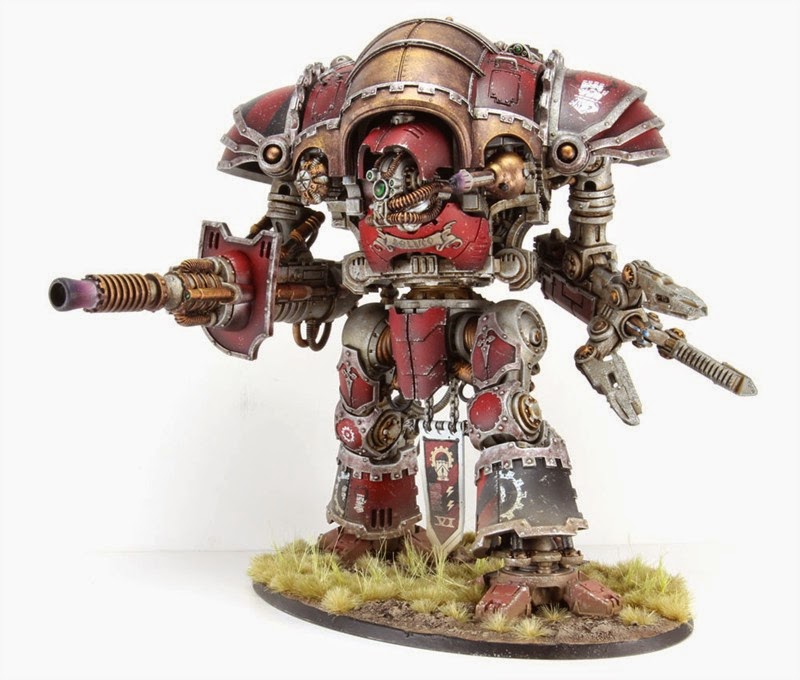 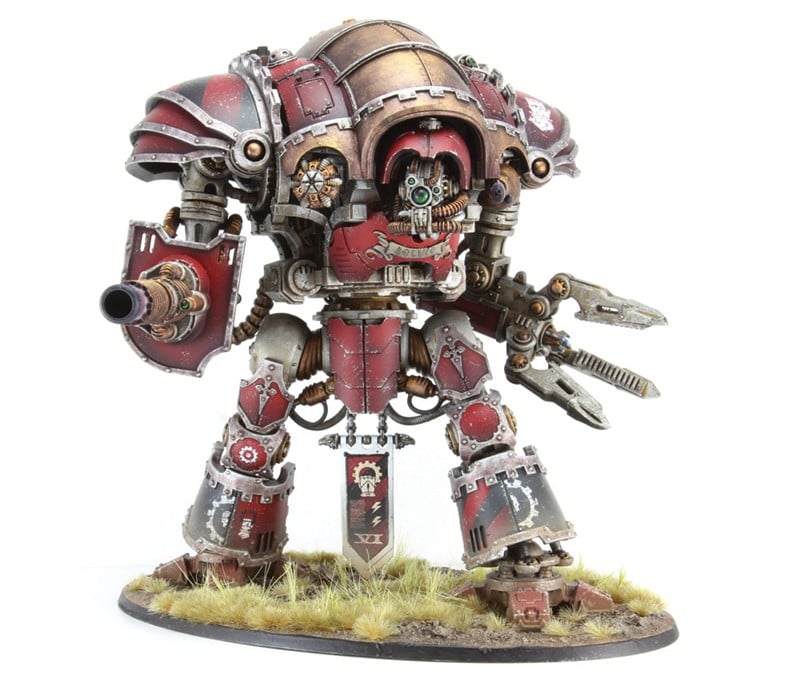 The Magaera is designed to be a multi-threat attacker that leverages a bit of shoot and a bit of fight to be more of a toolbox style piece, and 9th edition has given it a bit more power than the previous version.  As it is not Cerastus, you have the standard Knight profile of T8 with 24 wounds, but a big difference here is a flat 5++ rather than an Ion shield.  This does make the Magaera more resilient in close combat as there are plenty of melee threats out there with AP-3 or better.   As a shooting platform, the Magaera has a lot of decent damage, relatively low rate of fire weapons that are best at taking down elite infantry squads or lighter vehicles.  The Lightning Cannon can go hot thanks to the Tesla rule, and at S7 AP-2 and D3, that is a flat out murdered Aggressor or Bullgryn per failed save. That’s not bad.

The Plasma-fusil also hits relatively hard with even better AP.  Of course, the Rad-Cleaner is also really excellent at forcing a lot of saves, and really, it also provides great overwatch protection as few multi-wound units want to risk rolling a 1 or 2 and suddenly taking 3 damage per failed save.  Against melee characters, two failed saves can mean one dead attacker. There isn’t a huge volume of fire here though all told, but the fact that the Magaera ignores cover gets the most out of its shooting, making AP-2 and AP-3 much stronger.  Even the Rad-Cleanser can do work against standard 3+ armor saves as, without cover, your opponent is likely not getting that sweet, sweet 2+.   The Magaera did get 2 more shots with the Lightning Cannon, meaning you are generally guaranteed to get the bonus to hit once per volley, and a lot more so if you pop Trail of Destruction for full rerolls and go fishing for 6s. 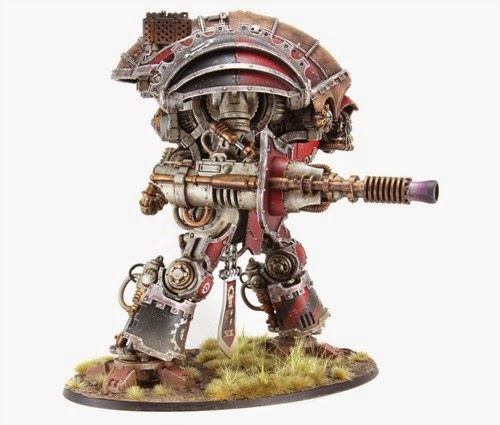 In melee, a Magaera is a bit better than the standard Knight if you take the Claw. With a straight Damage 3 stomp, that helps take some of the probability out of jumping on Terminators, and bonus, a lot of the custom House abilities can directly benefit it, getting you even more mileage.  If you take the Reaper chainsword, you lose the rad-cleansers, which really helps the Magaera in terms of overall threat volume, but if you do decide to do such, you can give The Teeth That Hungers to get it up to S16 AP-4 D6 without the penalty to hit and with a bonus attack.  That’s not bad but really, with no point change to take the Claw, you generally really just want to take the Claw. With the Claw, then Dreadblading is the wisest choice as you want Path to Glory for rerolls against Titanic targets and Characters, which helps take the sting out of essentially WS 4+. 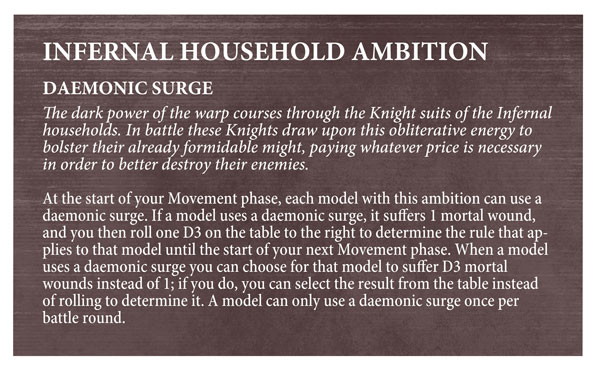 This one depends on your play style.  Infernal is always riskier, but it does give you a chance to make the Lightning Cannon a monster of a weapon.  Charging it up to S8 and D4 lets it threaten just about anything shy of another Titan, and it means killing a Centurion per failed save, and since the Magaera ignores cover, that means half of the Centurions you wound are going to die.   If you are going to commit to this, then it is always a good idea to pop Trail of Destruction to get reroll hits, and then go fishing for 6s as the more the Lightning Cannon goes off, the more value you are getting.  As the Magaera is multi-threat, you can also charge up for Speed to get into the scrum when and where you need to. 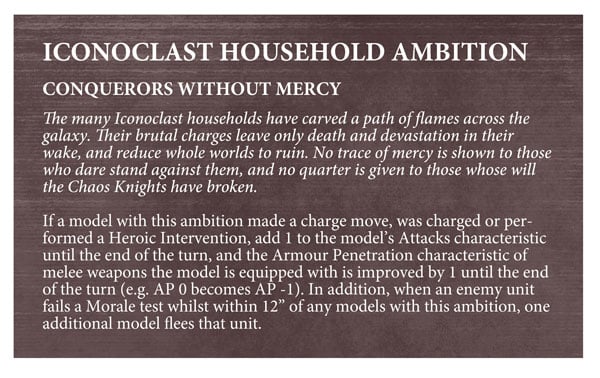 Iconoclast is consistent results with +1 attack and +1 AP, so the Claw becomes pretty devastating, especially on the Smash option, getting 15 WS 3+ attacks at AP-3 and D3.  Iconoclast also gets you access to the Vows, namely Vow of Carnage for +1 attack for every 10 models destroyed or Vow of Dominance for a lot more survivability.  If you are using the Claw, Vow of Carnage can be worth it as between 8 Lightning Cannon shots, up to 4 Plasma shots, and then 2d6 Rad-Cleanser shots, you can kill 10 models a turn at close range.  After a turn or 2 of that, the Magaera becomes a pretty scary melee threat with a ton of attacks on the charge, so either a ton more Smashes or some real big hits with the Claw, and even enough attacks where you can deal with missing half of them.

Dreadblading again comes down to preference and style.  Path to Glory is great if you have the Claw as getting to reroll hits against Titanics is super useful.  Daemonic Vigor is always good as extra movement doesn’t hurt and getting WS 2+ makes the Claw more reliable and the stomps scary, and of course, if you get BS 2+, all the better.  If you are going against a horde army, Galvanized Hull is money, especially combined with Nurgle’s Plate to really be a nasty bulwark against the masses.  Really, there are better choices for the Ambition-only relics that do not allow for Dreadblades, so it is not a bad idea to use the Magaera as the Dreadblade at all.

In terms of custom House choices, all the ones that benefit your melee but don’t apply to Stomps are great for the Magaera as the Claw certainly does benefit. Slayer of Kings is great for the flat +1 to hit against VEHICLES/MONSTERS, something the Magaera wants to do anyway, making the Claw far less of a liability on the big swings. Pair this with Frenzied Attackers and now you get a bonus hit on a 6 with the Claw, either Smashing or Crushing. You can make this an Iconoclast House for the extra attack and AP, making the Magaera an incredible blender against elite infantry or even rock Infernal to have the ability to boost the Lightning and still be able to dish out so decent melee damage. House Lucaris is a great choice as well for a flat +1 to hit in the first round of combat, again, making the Claw more accurate on the big swings but also making the Smash attacks just insanely accurate. The Warlord trait is sweet too for Always Fight First, and if you give the Magaera Quicksilver Throne and another hybrid platform the WL trait (like a Acheron or Atrapos), you have two rock solid Knights that nobody wants to charge, ever. 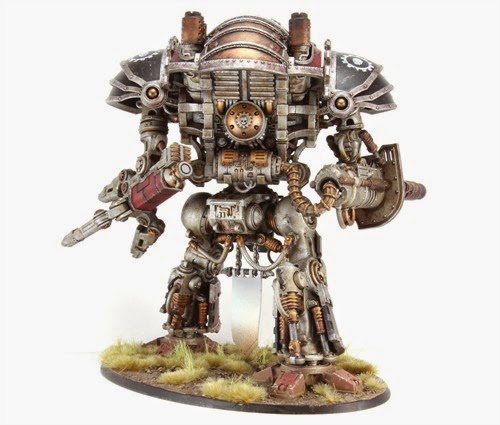 What really makes the Magaera not so great is its cost and its reliance on skewed dice.  The Magaera is expensive for what it is, 480 isn’t horrible but not ideal either, and at least more reasonable than before.  That is a lot of points in a model that isn’t the best fighter nor the best-ranged platform. Within 9”, you are getting 8 shots of Lightning, 4 shots of Plasma, and 2d6 shots of Rad.  Going with averages, that’s a total of 8 hits from Lightning, 7 from the Rad, and 2.68 from the Plasma.  That’s not that many hits all told, especially not for 480 points.  With the Rad-Cleanser, you are relying on failed saves, so against anything where D3 is actually super useful, you are relying on a lot of 1s or 2s at best, and again, that’s putting your hope in dice, which is a quick way to lose a game.

Throw all of this on the fact that the Magaera is a close-quarter fighter as you need to be within 9” to get the most out of its shooting, and well, that means you are likely going to take some big counter-punches, and the 5++ is only going so far, especially against the usual super-threats out.  To get the most out of the cannon, you really do need to spend the 2 CP for the rerolls to go fishing. Finally, you still have to deal with the usual Knight problems of terrain and positioning while also giving up easy secondaries.  All of this is a combination that just makes the Magaera not all that useful and far too expensive for what it does. 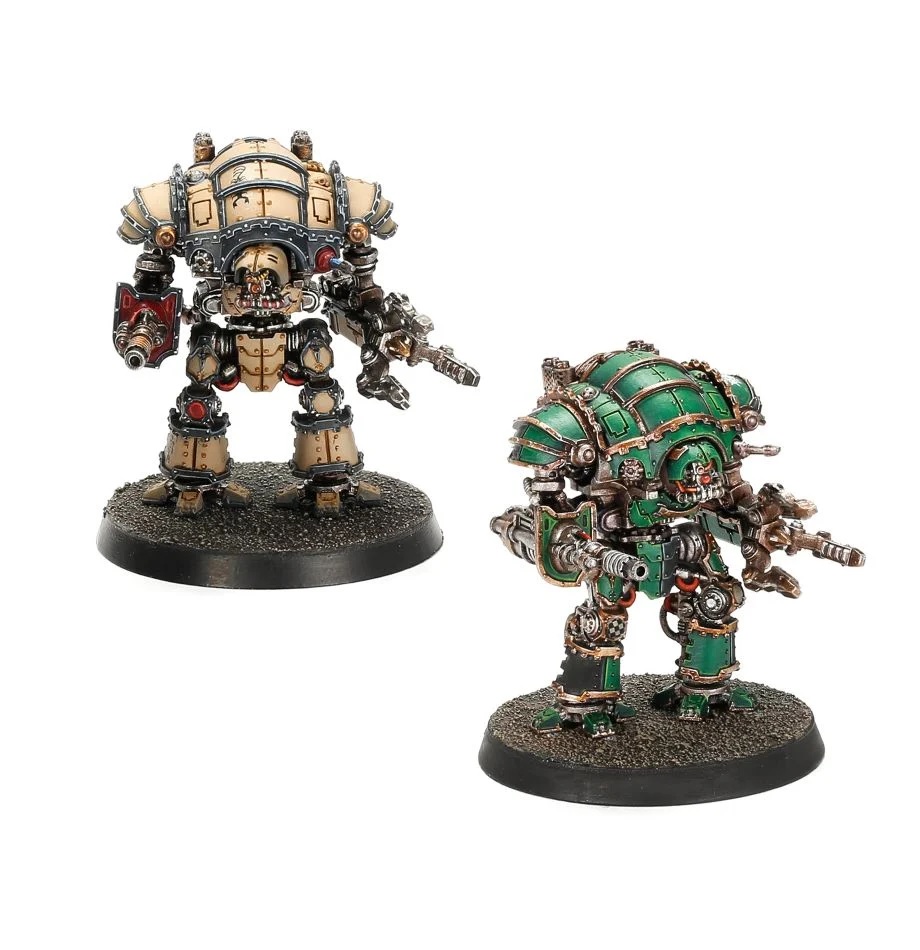 68/100 – A much better version than in 8th, but it is still really only the best choice when built very specifically, namely House Lucaris with the Quicksilver Throne and Dreadblading. Still, this is much more usable than before, and if multi-wound models really stay the soup of the day for a bit, the Magaera is well situated to handle that.

Tabletop Gallery: The Doctor Will See You Now 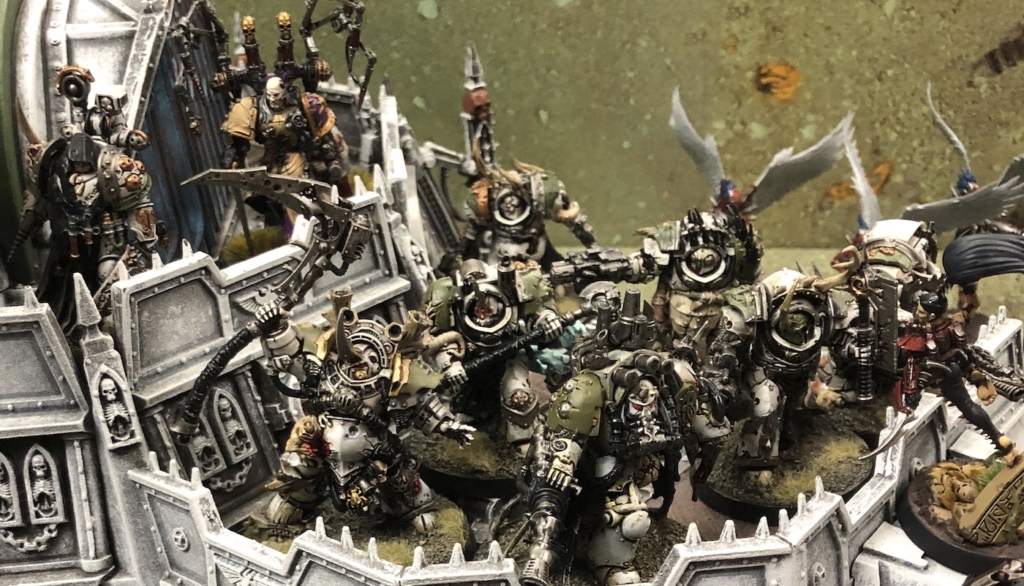