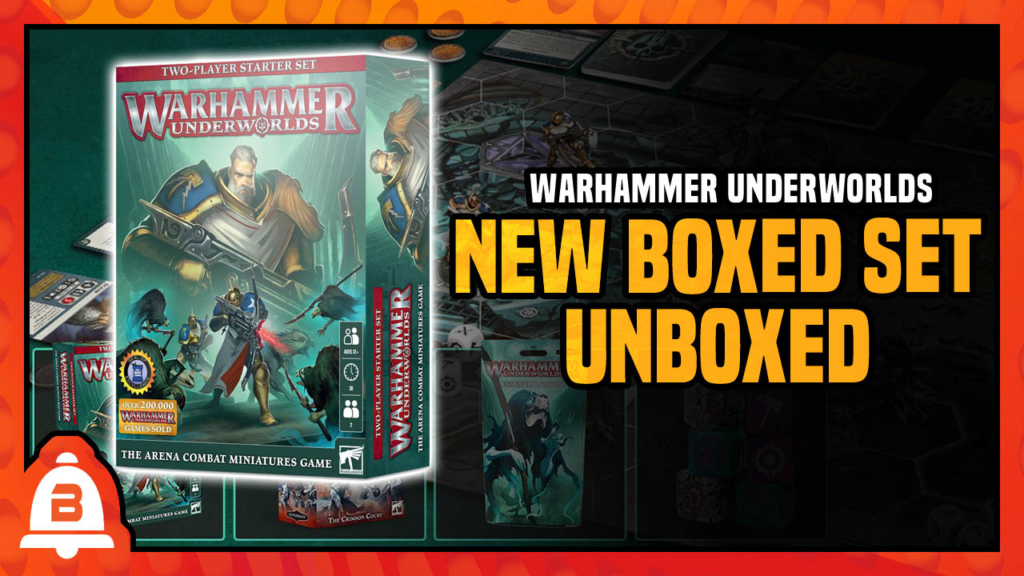 Let’s pretend you’re completely knew to Warhammer Underworlds – where do you start? You could just grab a warband…but you wouldn’t have all the extras you’d need to actually play – the board, dice, or tokens. Or the Rules for that matter. You could pick up the current seasonal box…if you can find that or even know that Warhammer Underworlds even has seasons. Or you can snag the new Two-Player Starter set and start with that: 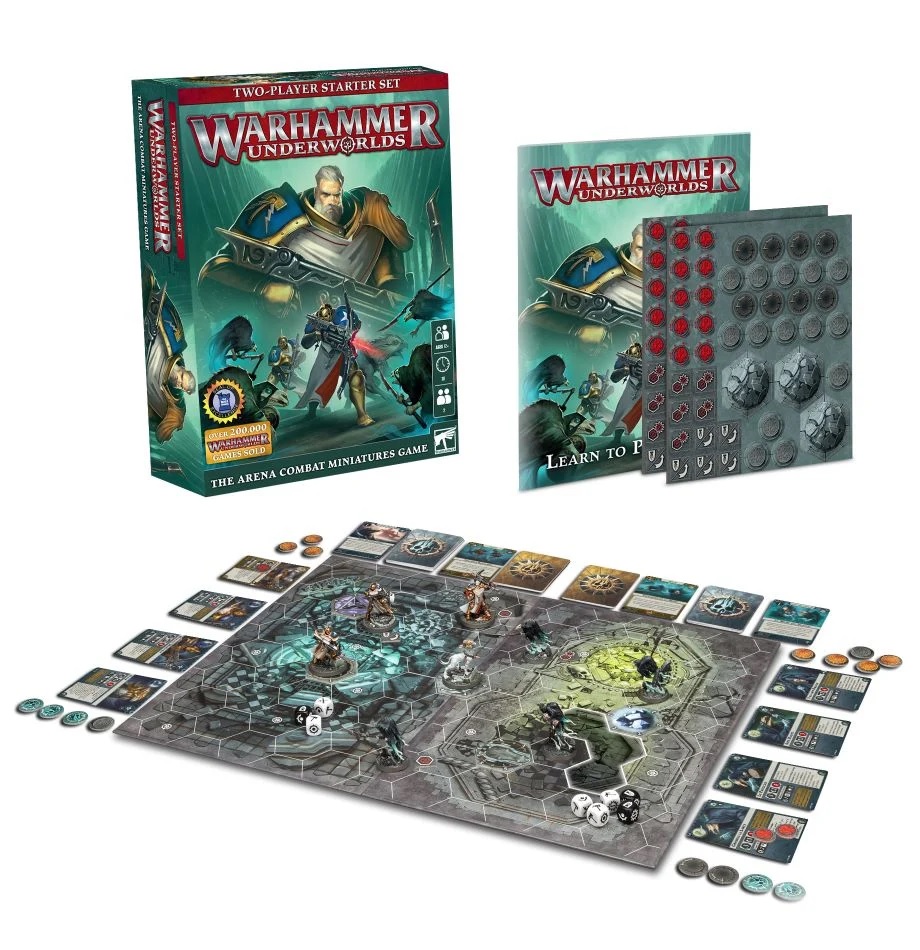 This box is a simplified and stripped down starter box. It’s got two warbands, dice, tokens, two double sided boards, and of course all the rules and cards you need to actually play Warhammer Underworlds. The fact that this starter box has two warbands that both have 4 models is also a big deal. Why? Because it’s more intuitive for new players to pick-up and play with. There are 4 activations per round and with four models, it’s just simple to learn (even though you can activate the same model with different actions – but that’s a slightly more advanced thing to learn later). 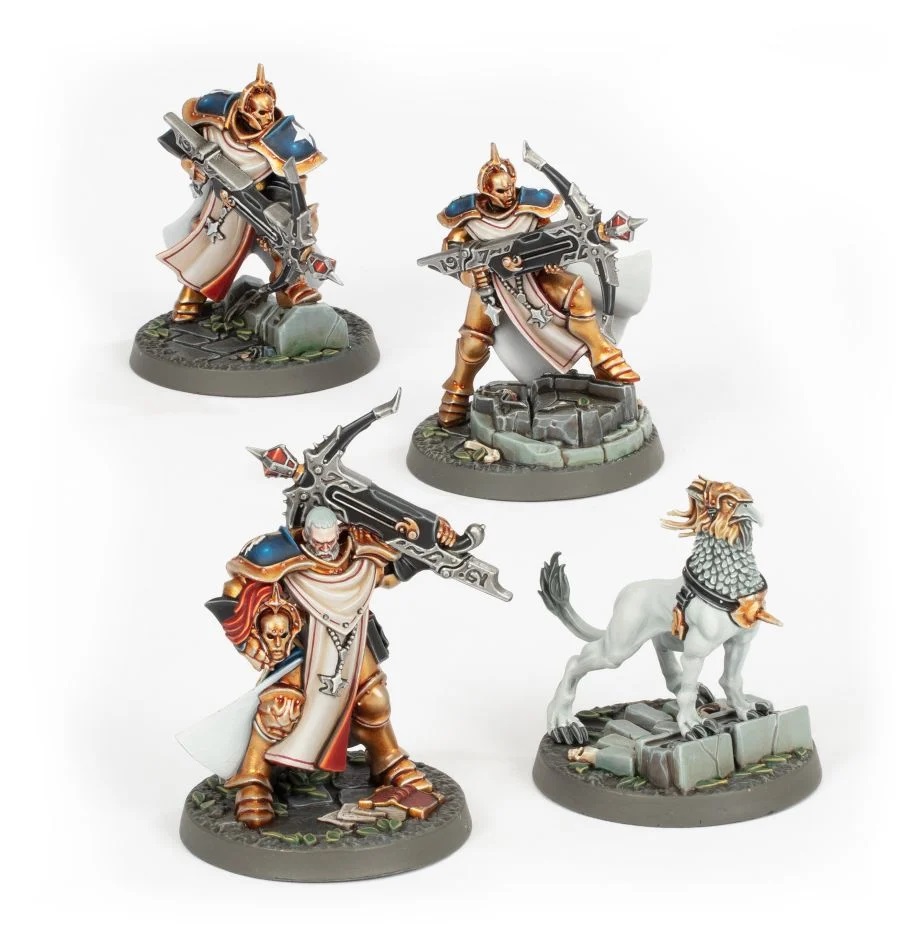 While the warband models aren’t new, the two warbands are new additions to the game.  So that’s a plus for vets out there. If you’re just looking to collect all the warbands, at least you’ve got a good reason to pick-up this box. 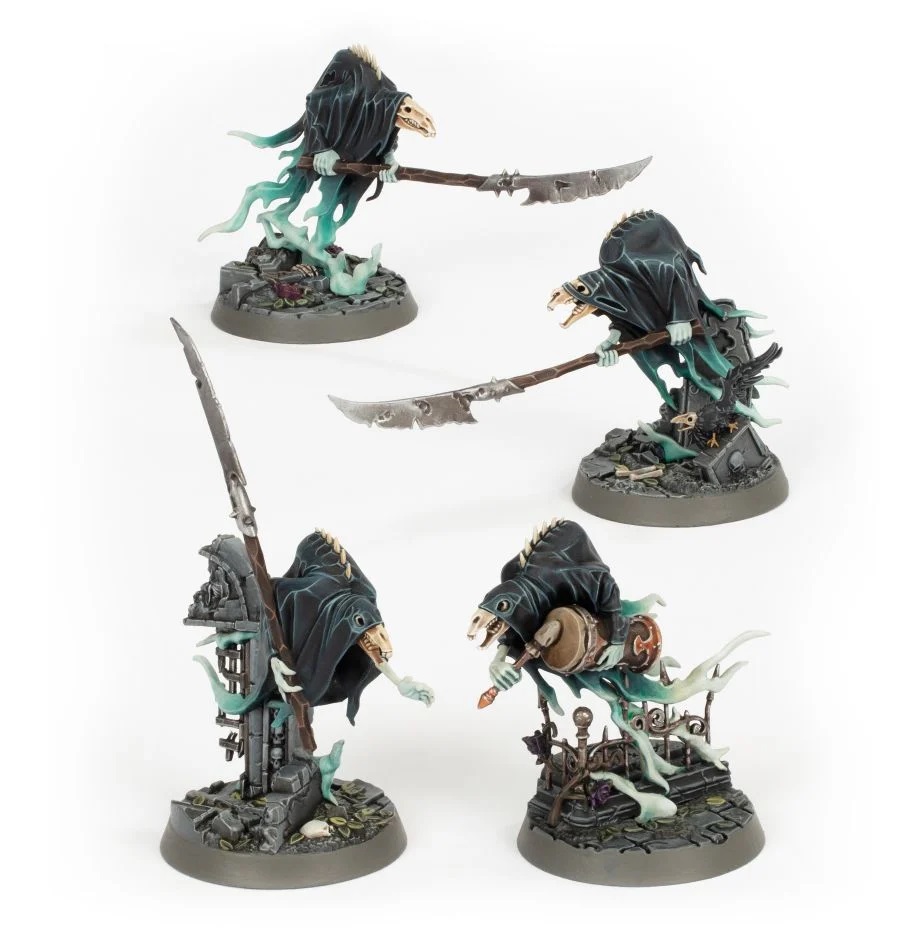 These two warbands also play differently enough that either side is going to want to try very different strategies to be successful. They also have different threats to play around with and that’s part of the fun. With two new players, they can play one side and swap for the next game to get a different experience. That of course will only keep you entertained for so long – eventually you’ll want to get into deck building! 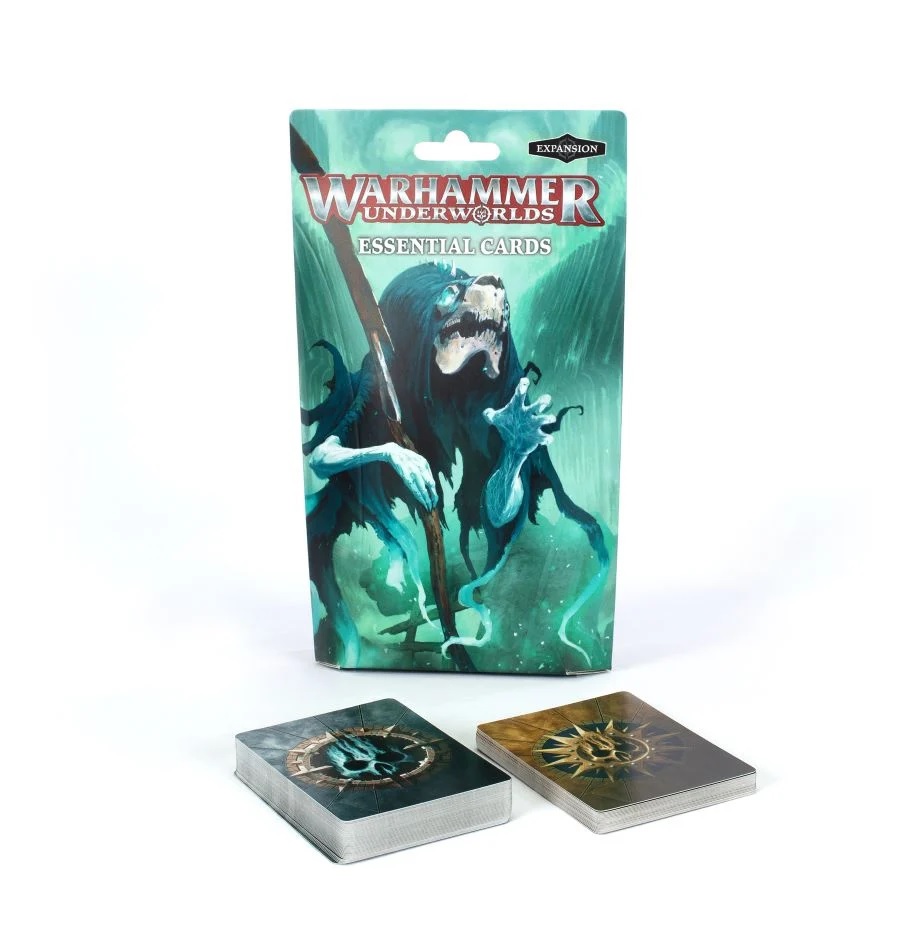 That’s where the Essential Cards pack comes in. There is a reason GW released these on the same pre-order weekend. It’s a ton of generic cards – 20 of each for gambit, objectives, and upgrades – that any warband can use. If you missed out on previous packs or seasons, this can get you all caught-up. Combined with the new Two-Player Starter and you’re going to be ready for deckbuilding and customizing your warband’s playstyle for a good long while. 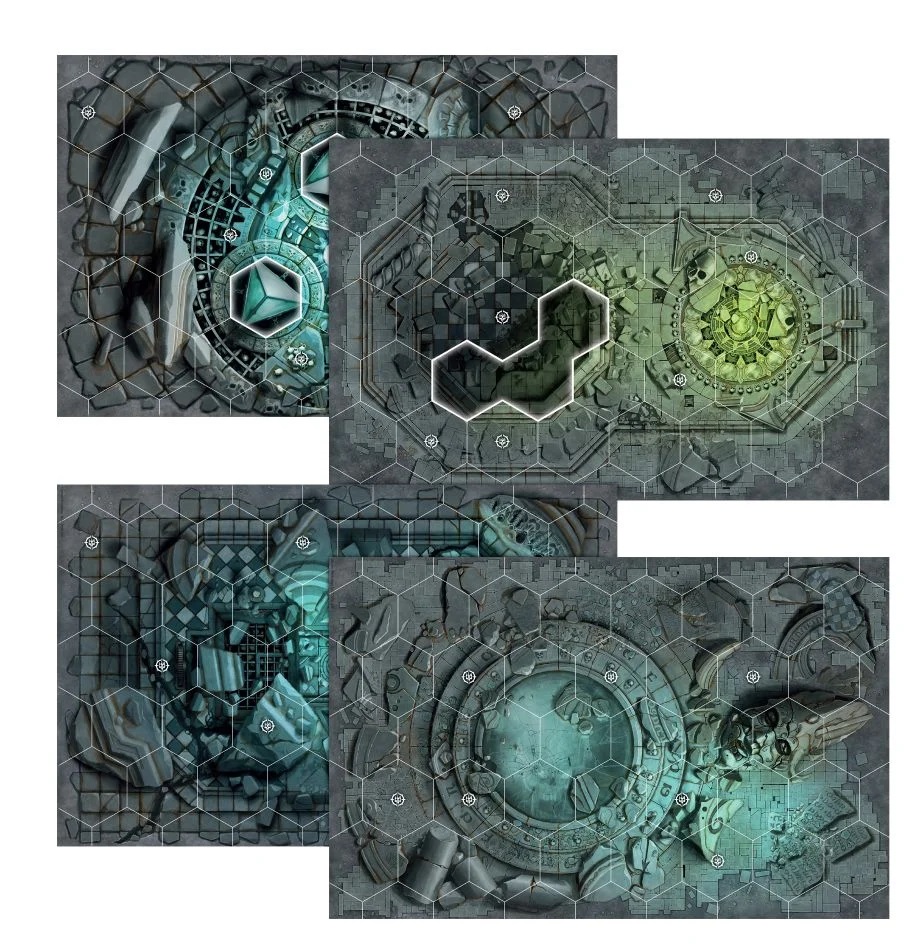 This box and the additional cards make for a fantastic launching point for new players. Eventually, players can also expand into the different seasons and try out the new mechanics (like magic, hunger, or other warband specific powers). But that’s the nice part about this starter – none of that is in the ‘core’ game but is still 100% compatible. I don’t know what GW’s plan is moving forward after the current season of Warhammer Underworlds (Direchasm). However, I think new Two-Player Starter Box should be the default starter moving forward. If you want to introduce a new player to Warhammer Underworlds, start here. 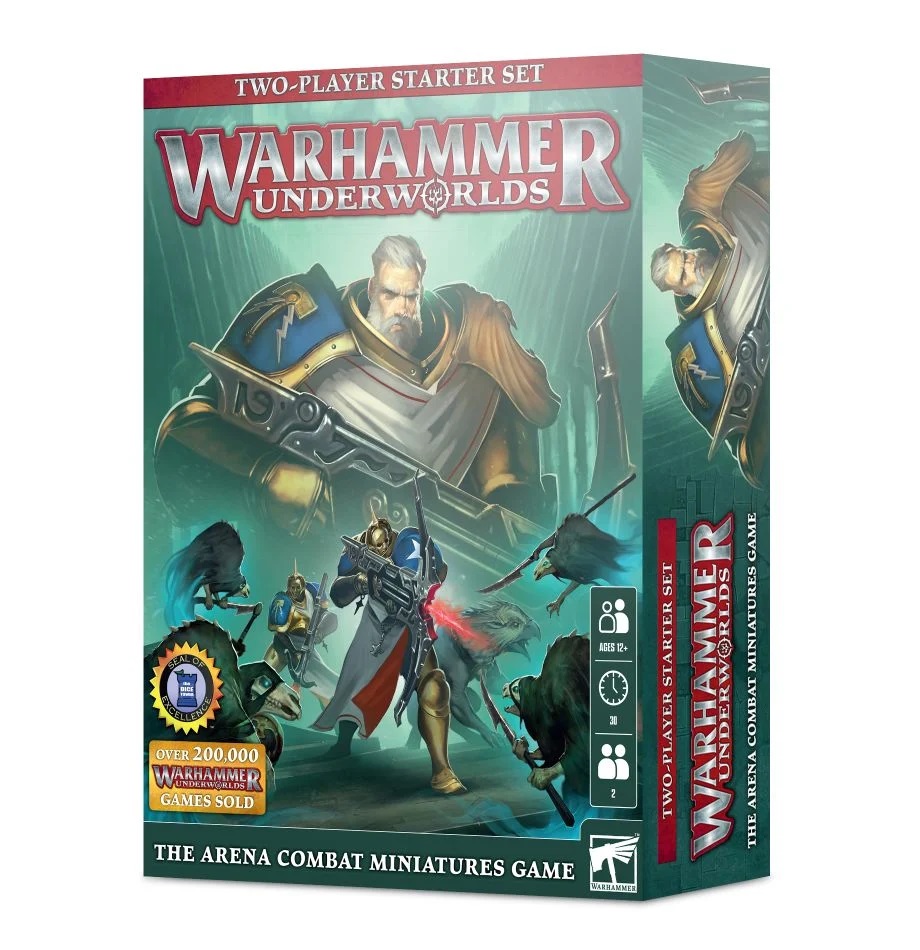 The Mirrored City of Shadespire is a nightmare plane of illusions and madness, an ever-changing labyrinth of endless stairs, cramped streets, and soaring archways. Dare you enter and claim the glory that awaits?

This starter set is the ideal way to get into Warhammer Underworlds. With two complete warbands, the full rules, and all of the dice, tokens, and boards that you need to play the game, there is no better choice to begin your adventures in the ultimate competitive miniatures game. 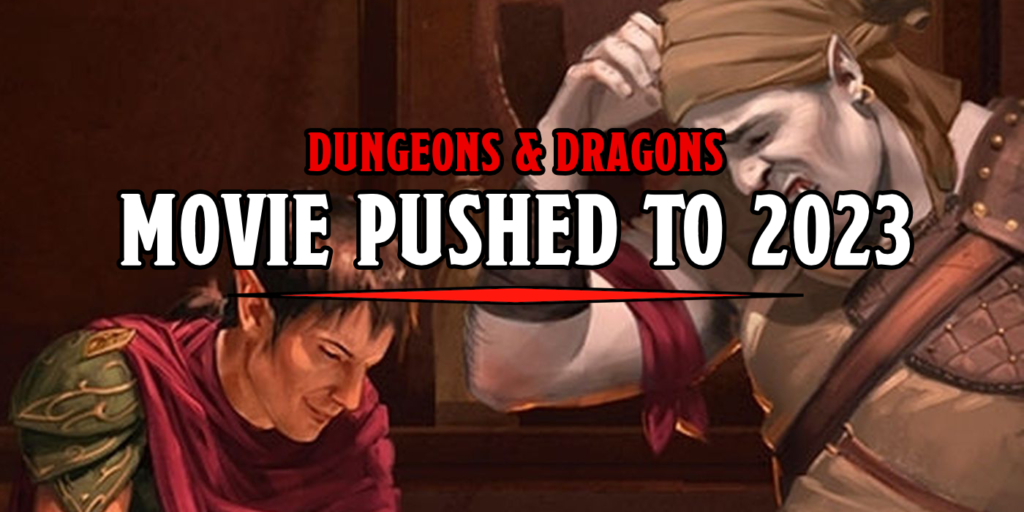