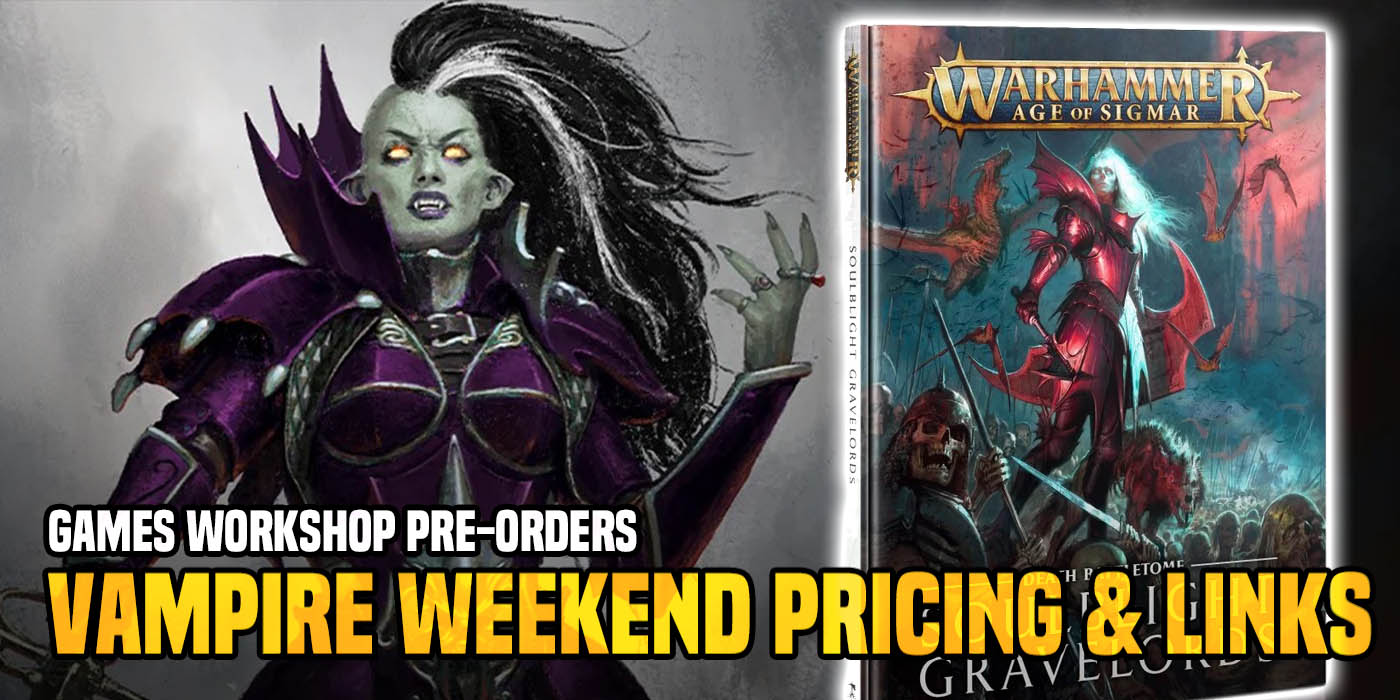 The Soulblight Gravelords are here and they are ready to start some dynasties – in blood! Come see what’s up for Pre-orders. 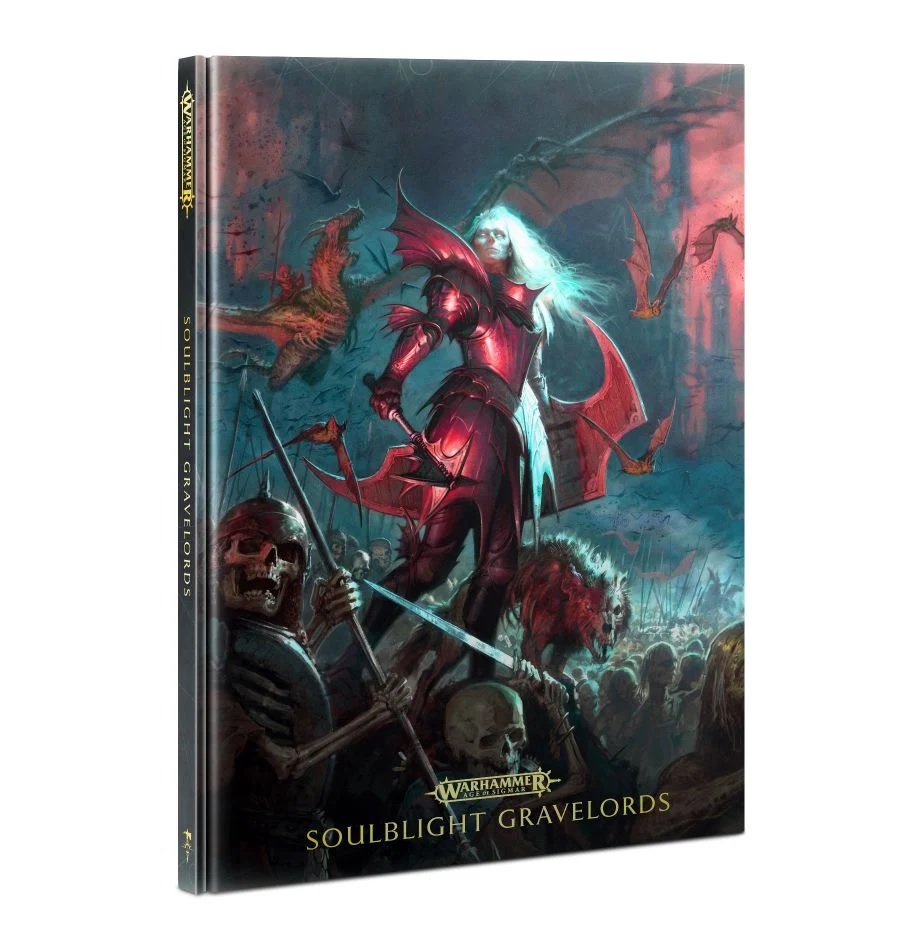 Strictly limited to 700 copies, this edition is only available while stocks last. It features a soft-touch cover with a cloth spine, gilt-edged pages, and a ribbon marker.

Afflicted by the terrible curse that gives them their name, the Soulblight Gravelords are powerful undead monstrosities eternally hungering for the blood that sustains them. Commanding legions of undead servants and terrifying monsters in the name of their creator, Nagash, these lords of Shyish make use of every means available to conquer the Mortal Realms and bring their prey into line.

In this book, you’ll find out how the Soulblight curse came to be, the origins of its megalomaniacal creator, and the dynastic houses that have since sprung up across the breadth of vampire society. Battletome: Soulblight Gravelords is also packed with all the rules you need to create your own force of undead, from legions of shambling zombies to winged, fanged terrors that stalk the night sky.

– A treasure trove of background information on the realm of Shyish, the Soulblight vampires, and their creator, the Great Necromancer Nagash
– Stunning art depicting the Soulblight and their undead servants
– 40 warscrolls for everything from mighty Vampire Lords to humble Deathrattle Skeletons
– 5 warscroll battalions
– Allegiance abilities for 5 separate Cursed Bloodlines, including battle traits, command traits, and artefacts of power
– A unique battleplan depicting a vampire’s assault backed up by unending tides of undead
– Path to Glory campaign rules for creating a Soulblight Gravelords warband
– Two Spell Lores, Lore of the Vampires and Lore of the Deathmages
– A beautiful miniatures showcase and painting guide for getting the most out of your undead horde
– Pitched Battle profiles for all units featured in this battletome 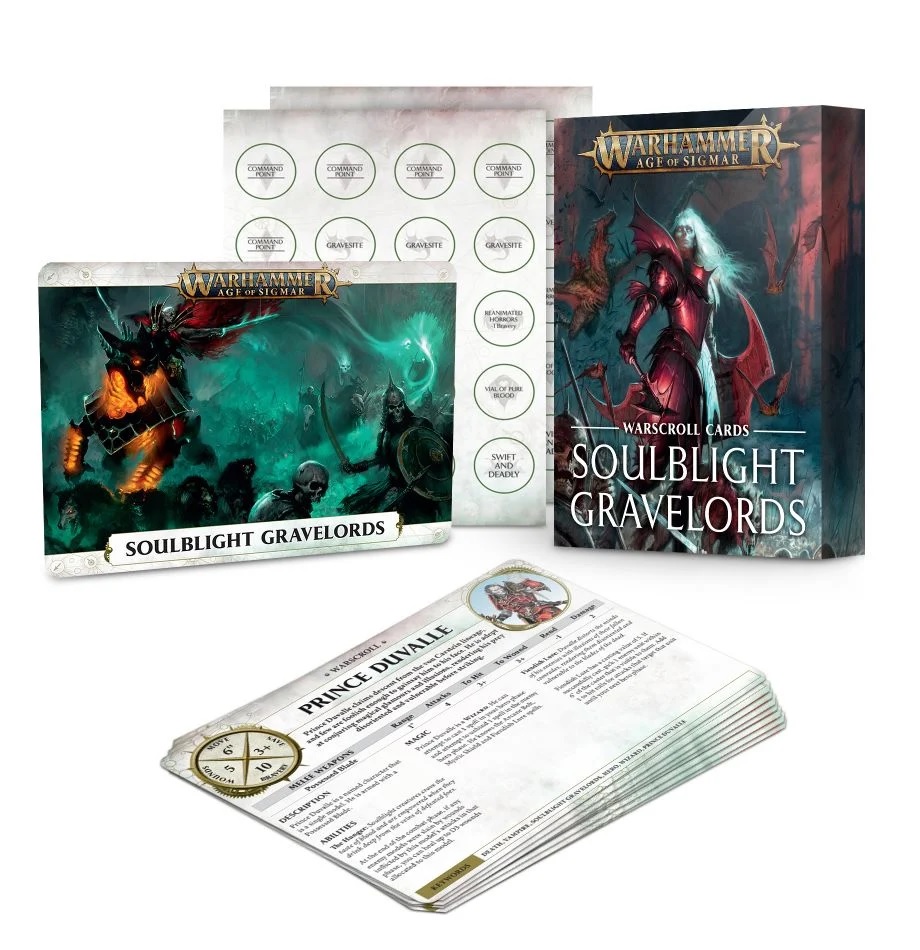 Keep your eyes on the enemy rather than digging through your battletome with the help of these Warscroll Cards, containing a handy reference for all 40 of the units found in Battletome: Soulblight Gravelords. You’ll also get a set of 40 tokens designed to keep track of the various spells and abilities you can use on the battlefield.

In this pack, you’ll find: 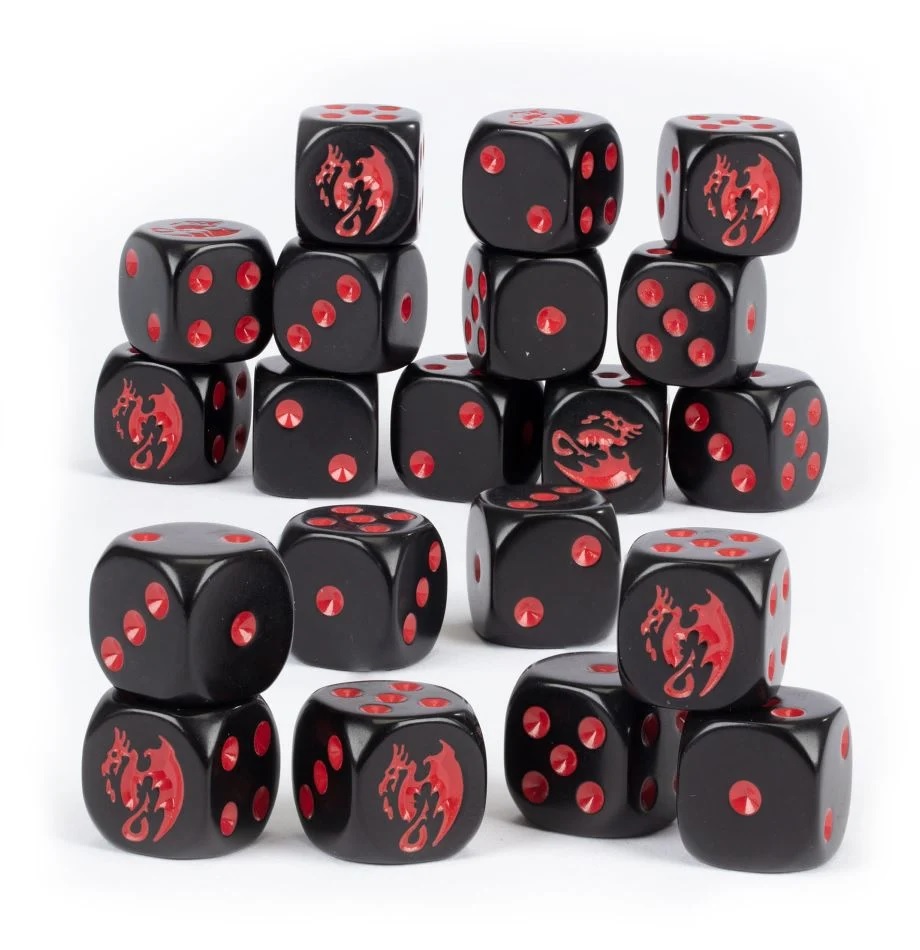 Keep your tabletop spooky! Even though bones were once used to make dice, and they might seem more thematically appropriate, we guarantee these will get you fewer odd looks.

This set contains 20 six-sided dice measuring 16mm along each edge, cast in black with red ink, and with the Soulblight Gravelords’ emblem taking pride of place on the 6. 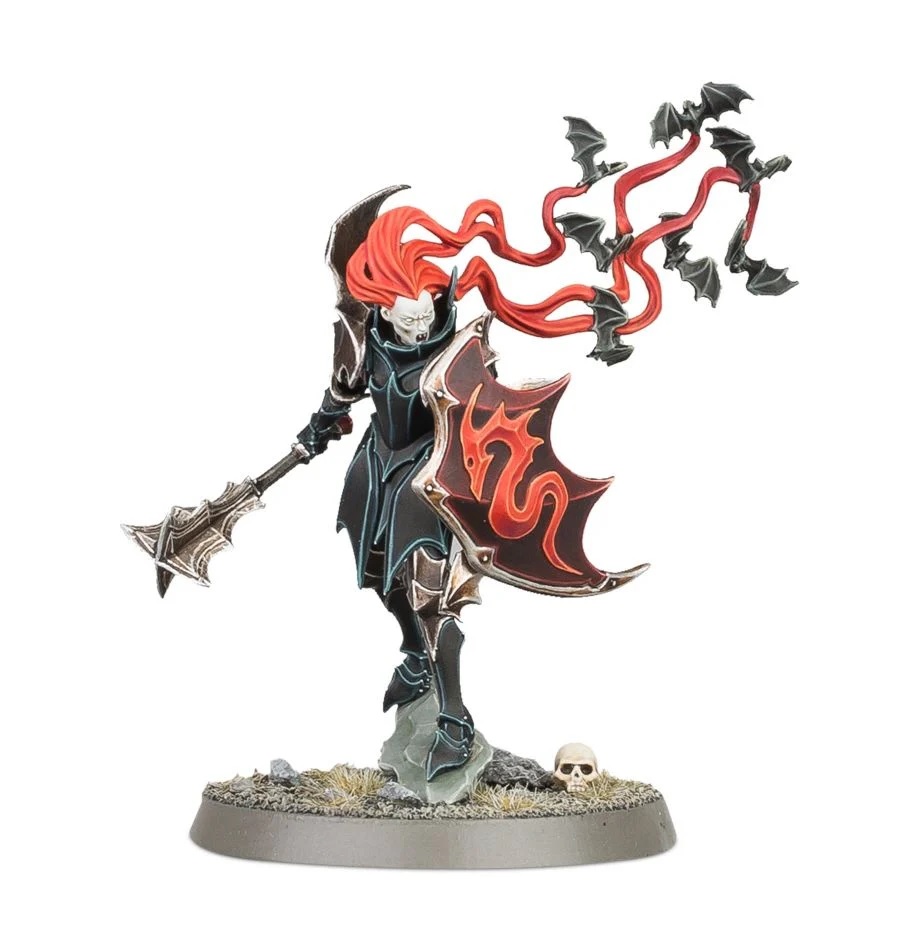 Elder vampires often continue to grow in power as the years tick by, their arcane and martial might growing steadily even as the paragons of mortal races wither and die. Many take up the mantle of a Vampire Lord, commanding legions of undead servants and scores of lesser Soulblight vampires in grand campaigns of conquest across the Mortal Realms. Such is the contempt they have for mortal life, that a Vampire Lord will gladly pause in the middle of battle to drain a worthy foe of their blood before continuing the slaughter of their comrades.

Quintessential leaders for a Soulblight Gravelords warband, Vampire Lords are everything one afflicted by the Soulblight curse aspires to be. Capable of smashing aside entire units of lesser soldiers just as easily as they weave the deathly magics of Shyish, the true power of these consummate warriors lies in their command of the shambling hordes that march with them. By unshackling the bestial rage that drives their unnatural thirst for blood, nearby mobs of skeletons and zombies find themselves invigorated to unseen heights of violence.

The kit is comprised of 12 plastic components, with which you can assemble one Vampire Lord, and is supplied with 1x Citadel 40mm Round Base. 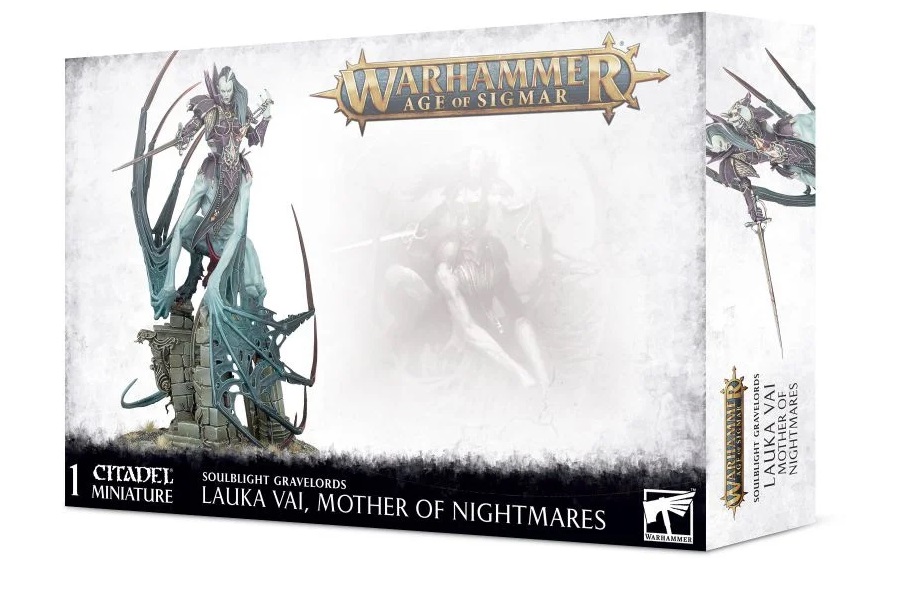 Once a courageous vampire-knight who, despite holding no love for Ghur’s mortal races, refused to prey upon those weaker than herself, Lauka Vai’s constant struggle against the hunger within was cruelly cut short while tangling with a Tzeentchian sorcerer. Upon falling into a pool of primordial ooze she returned in an altogether more monstrous form, slaying her fellow knights in a fit of rage before the red thirst could be quieted. Now found among the equally bestial Avengorii dynasty, she leads her fellow vampires with the dignity of a true warrior queen, all the while fighting an unwinnable war against her own base instincts.

Standing tall over the battlefield as a bestial mixture of bat-fiend, drake and vampire, Lauka Vai strikes down would-be challengers with ease befitting a noble knight in monstrous form. While she retains her wits and keeps her thirst at bay, fellow Soulblight monsters hang on her every word, but a deadly rage can descend at any moment and turn the Mother of Nightmares into a charging, howling whirlwind of carnage.

The kit is comprised of 39 plastic components, with which you can assemble one Lauka Vai, Mother of Nightmares, and is supplied with 1x Citadel 80mm Round Base. This model can alternatively be assembled as a Vengorian Lord. 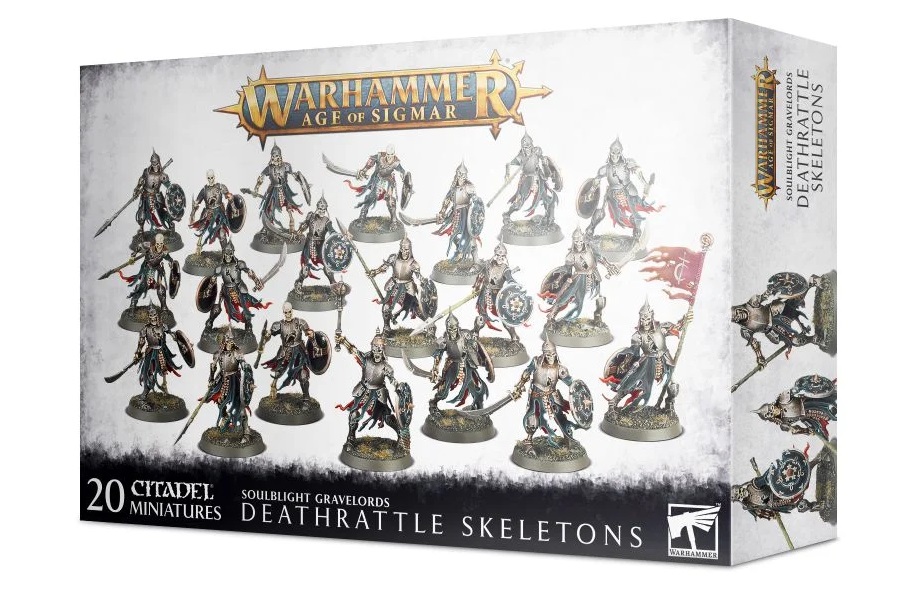 Bedecked in rusting weapons and wearing the fading scraps of once-proud armour, Deathrattle Skeletons are the unflinching core of many a Soulblight vampire’s army. Not only are they tireless, remorseless warriors, but also diligent workers in the fields of the Deathrattle Kingdoms, ruled over by Wight Kings as the shining ideal of Nagash’s entropic necrotopia.

While not the greatest of soldiers individually, Deathrattle Skeletons advance across the battlefield in an unending tide of clanking bones and steel, and make up for their shortcomings with sheer numbers. Even those who think they’ve struck down their grinning, soulless opponents find that the death-magics of Shyish cannot be denied, and the skeletons rise again for another go.

The kit is comprised of 170 plastic components, with which you can assemble 20 Deathrattle Skeletons fielded in one or two units. Each group of 10 contains options to assemble one Standard Bearer and one Skeleton Champion armed with a mace or halberd. These models are supplied with 20x Citadel 25mm Round Bases. 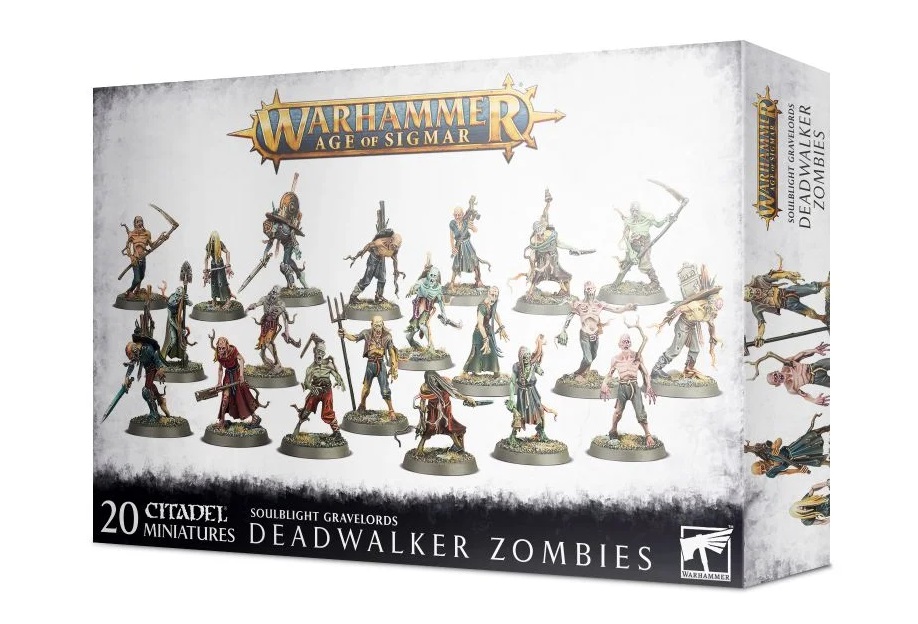 Deadwalker Zombies are created from the bodies of the recently dead, given strength through the power of dark necromancy and sent onto the battlefield in shambling hordes. Utterly mindless and driven by a collective instinct alone, zombie migrations have become an ever-present plague following the necroquake, and many cities have instituted roving ‘pyre-gangs’ to burn out an infestation before it grows too large.

Despite being slow, clumsy, and fragile on their own, a sufficiently large mob of Deadwalker Zombies can threaten even the most skilled enemy soldiers by weight of numbers alone. Their single-minded hunger even gives them a surprising turn of speed when prey strays too close, and anyone unlucky enough to be brought down by one may find themselves joining the Soulblight ranks before the battle is over.

The kit is comprised of 94 plastic components, with which you can assemble 20 Deadwalker Zombies. These models are supplied with 20x Citadel 25mm Round Bases. 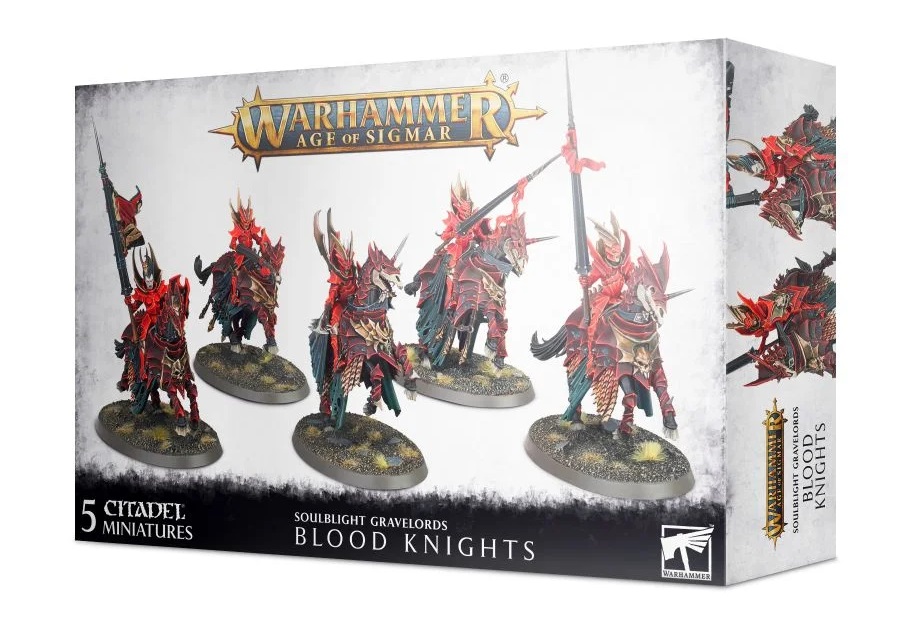 Some vampires dedicate their eternal lives to the mastery of one pursuit, and those determined to become peerless warriors invariably end up among the ranks of the Blood Knights. Atop their hulking undead nightmare mounts and clad in thick plate armour, these martial experts are unstoppable on the charge and take a supreme satisfaction in trampling lesser mortal soldiers beneath them.

As elite knights riding at the head of the Soulblight Gravelords’ armies, Blood Knights have perfected the art of barreling straight through formations of enemy troops, spearing and slashing as they go. Their armour and powerful physiques make them durable fighters in melee combat, and thanks to the Soulblight curse they are even able to restore their vitality once the blood starts flowing.

The kit is comprised of 67 plastic components, with which you can assemble 5 Blood Knights armed with either templar lances or blades, and with a choice of helmeted or unhelmeted heads. One can be assembled as a Kastellan unit leader equipped with a unique helmet, winged armour, and mace weapon arm, and one can be assembled as a Standard Bearer. These models are supplied with 5x Citadel 75mm Oval Bases. 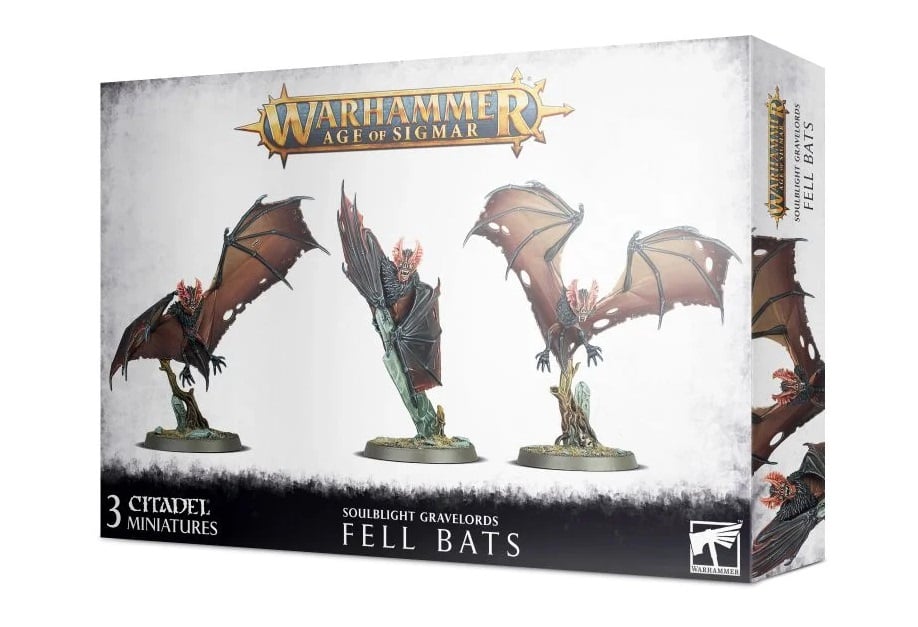 Grotesque monsters that prey upon the blood of the unfortunate souls they catch, Fell Bats are an amalgamation of deathly magics and the Soulblight curse brought into being by their vampire masters. Often seeking out victims to drain for their lord’s own sustenance, the grossly oversized wingspan of these bats is often the last thing someone will see before razor-sharp fangs sink into their flesh.

Not only are they a useful delivery service for blood, but they’re also excellent scouts and flanking troops for the Soulblight Gravelords. As their lust for blood drives them to ever more savage feats of violence, the Fell Bats repeatedly dive in and out of combat in a frenzy of bloodshed that only ends when they, or more often their victim, expires completely.

The kit is comprised of 15 plastic components, with which you can assemble 3 Fell Bats. These models are supplied with 3x 40mm Citadel Round Bases. 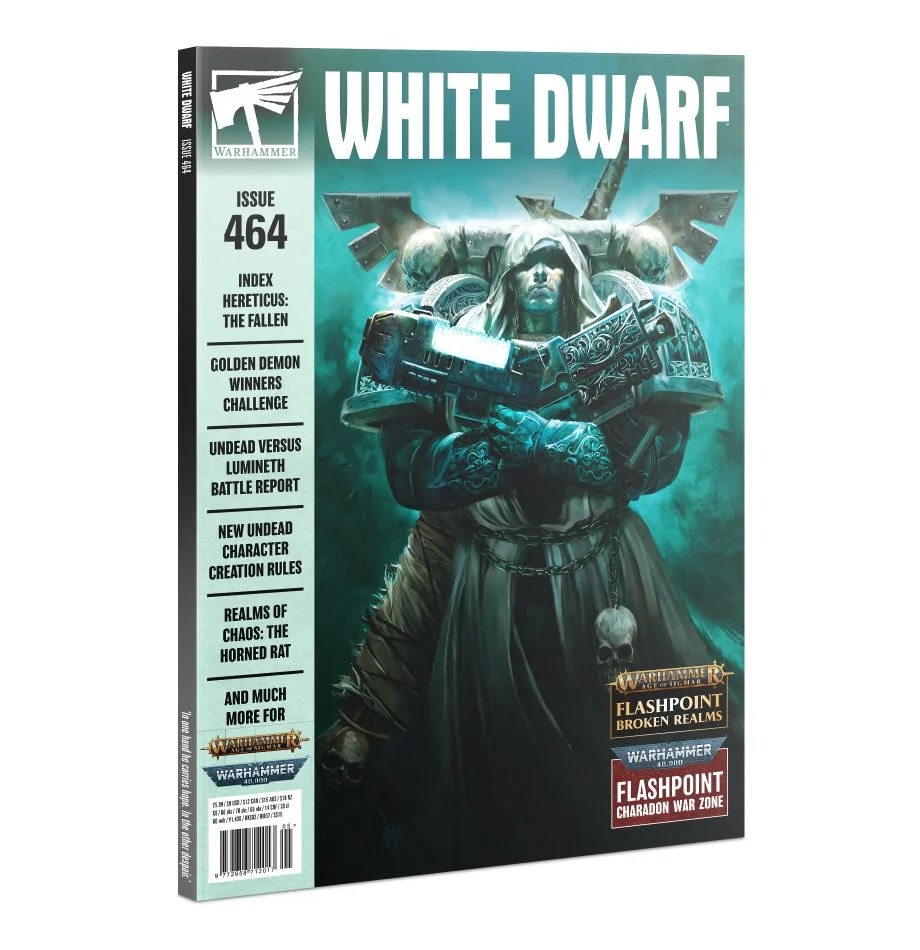 40K & AoS Pantheons of the Aeldari & Aelves: Gods of Space and Magic - PRIME 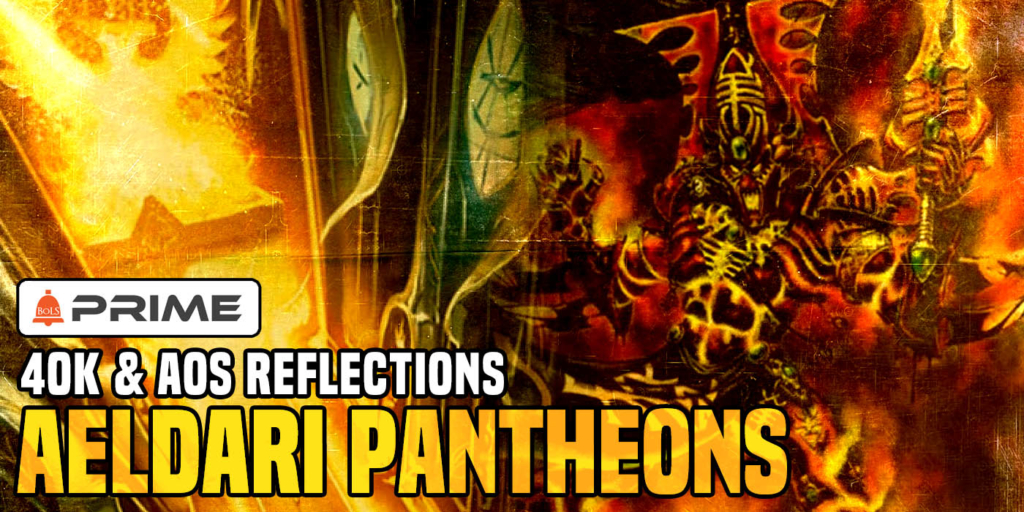