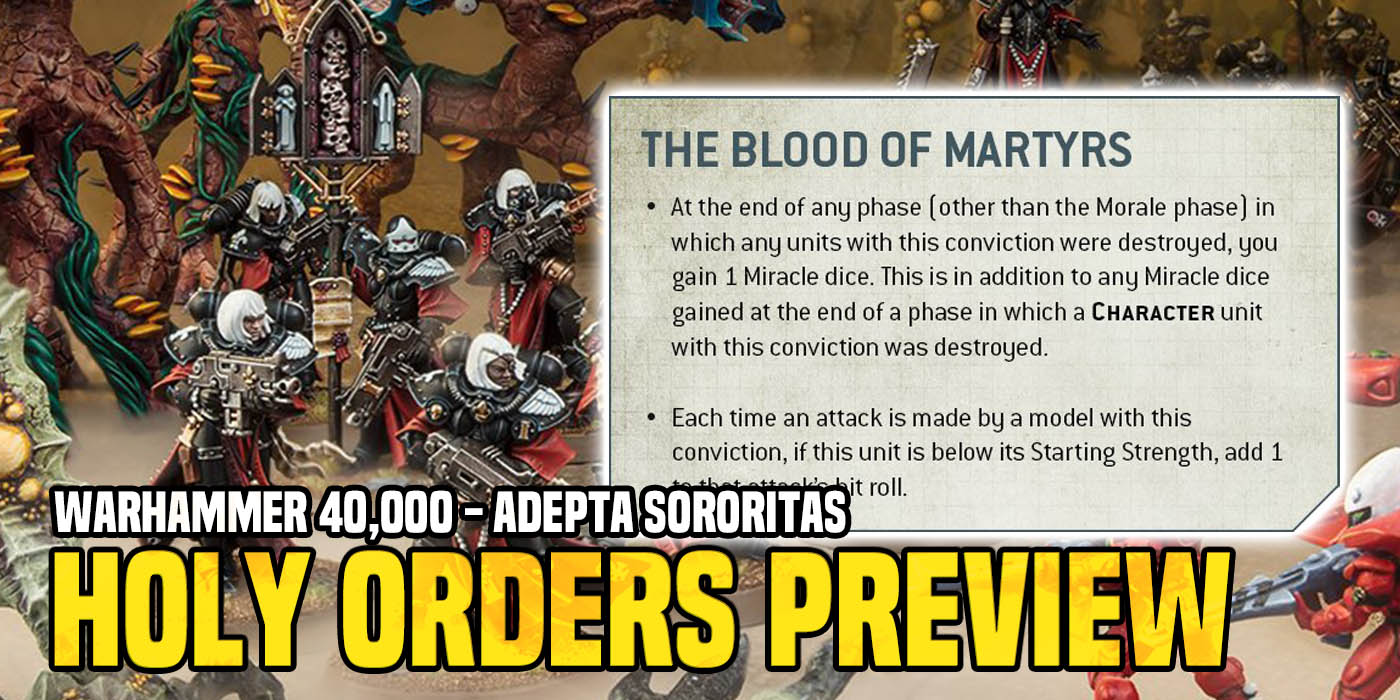 The Holy Orders of the Sisters of Battle are hosting a recruitment drive and you’re invited. Come see which Order interests you!

The Adepta Sororitas are split up between a number of Holy Orders. In the upcoming codex, there are six options to choose from along with the rules for creating your own order. Today, we’re going to look at these orders and get a sense of what they do.

“Though they all fight with absolute belief in the Emperor and a burning hatred of Mankind’s enemies, the Orders of the Adepta Sororitas are by no means identical. Each has different traditions that form their foundation and unique attitudes towards their service.” 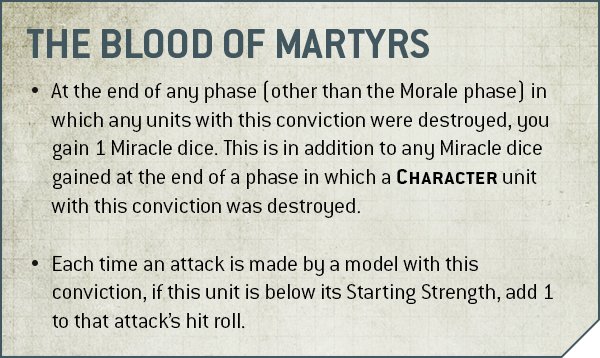 These ladies are all about self-sacrifice. They not only get extra Miracle dice as their units are destroyed, they also get to a +1 to hit if they have taken any casualties in a unit.

Holy Orders don’t just get their own convictions. In addition, they also get their own stratagems, relics, warlord traits and more. You get the idea. But here are some examples. 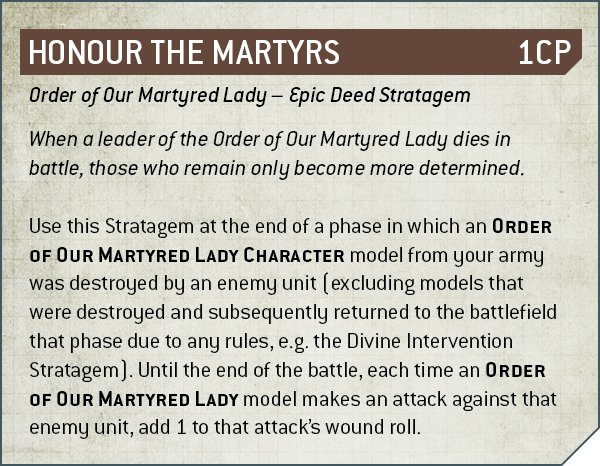 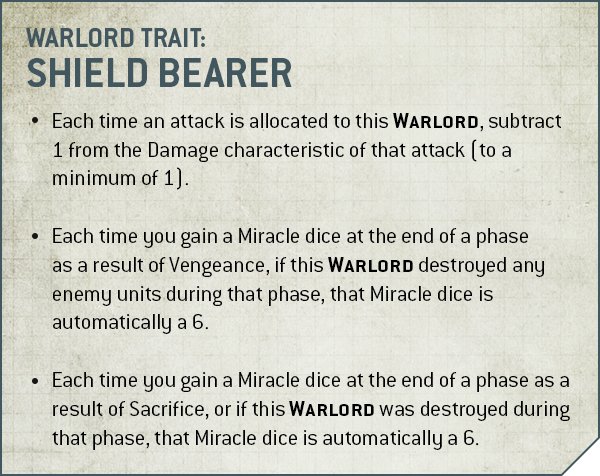 Shield Bearer seems appropriate for an Order that is all about sacrifice. It’s also worth noting that it’s a great way to generate some Miracle dice that are automatically a 6.

These Sisters have a grit that is unmatched among the Holy Orders. Their grim determination keeps them around and fighting the enemies of the Emperor. 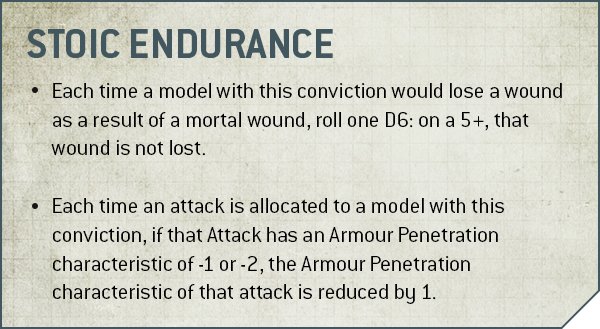 A 5+ to ignore Mortal Wounds is no joke. On top of that AP -1 or -2 gets reduced by 1 making their armor even more effective. They will take the hits and keep on kicking. 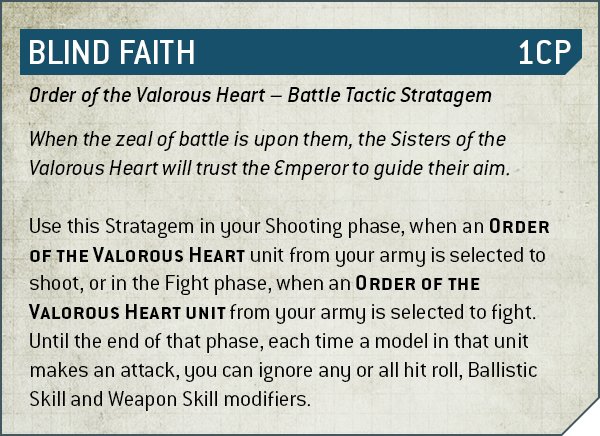 Their Warlord Trait makes for one tough Sister. Not only will she be able to regain wounds that 5+ isn’t just for mortal wounds now – it’s for ANY lost wounds.

The Order of the Bloody Rose is for anyone who’s looking for an aggressive army. They turn the heat up with their righteous fury and focus their wrath on the foes of the Imperium. 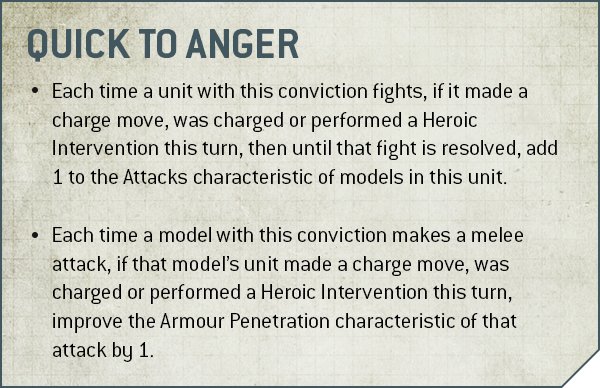 Getting into close combat has some perks for this Order of Sisters. I think they might have been hanging out with some Blood Angels or something. 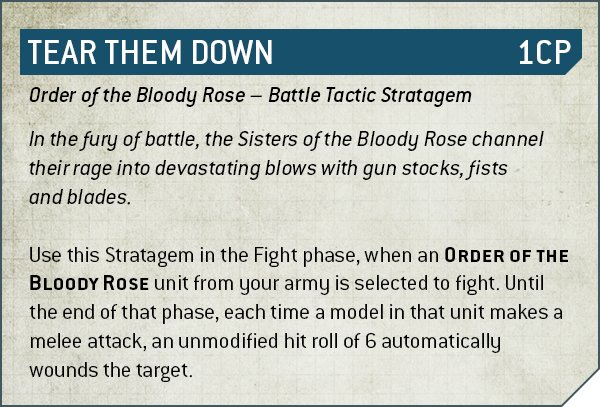 This stratagem converts those 6s to hit into auto wounds. That will be handy for taking down pretty much any target with a ton of attacks.

The First Order to be created on Terra, these ladies set the example for all other Orders to follow. They are strict adherences to the history and traditions of the Adepta Sororitas. 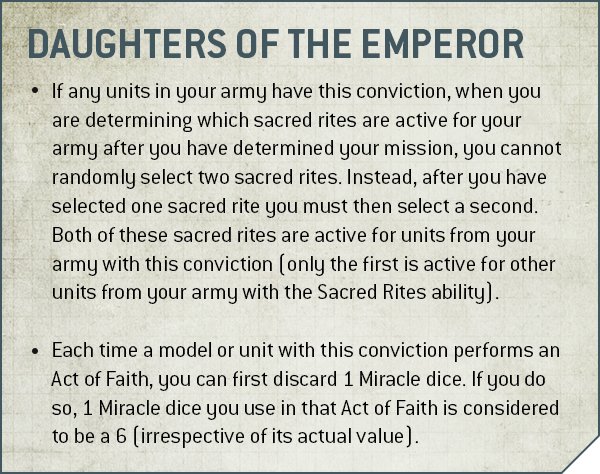 “One of the most iconic symbols of the Adepta Sororitas is the cleansing flame, and warriors of the Ebon Chalice carry it with them into battle with devastating results.” 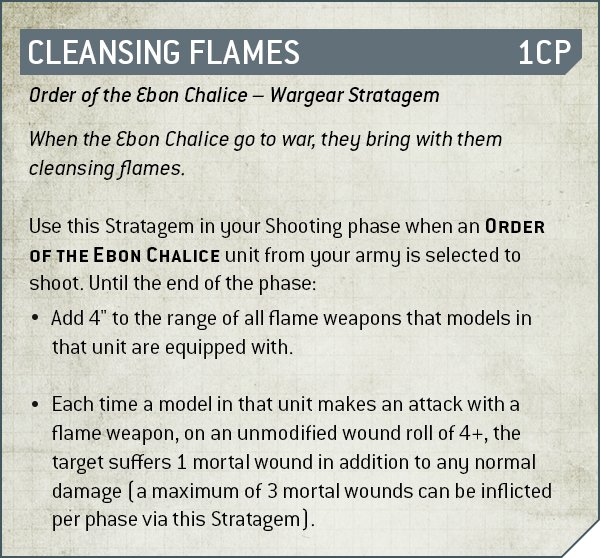 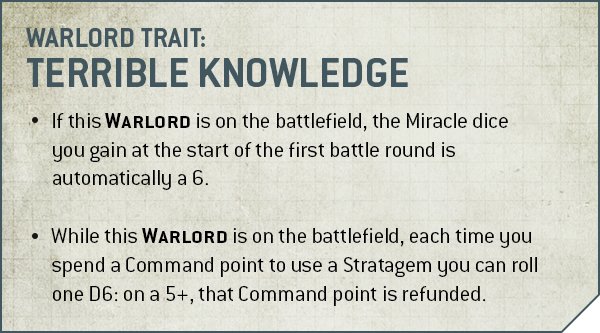 Getting Auto 6s for Miracle Dice seems pretty strong! On top of that, every time you spend a Command Point you roll a die and on a 5+ you get a refund on that CP. Talk about being effiecent with your resources.

“The Order of the Argent Shroud is often deployed as the spearhead of an Imperial crusade, taking advantage of speed and boldness to drive a silver bolt through the heart of an enemy force.” 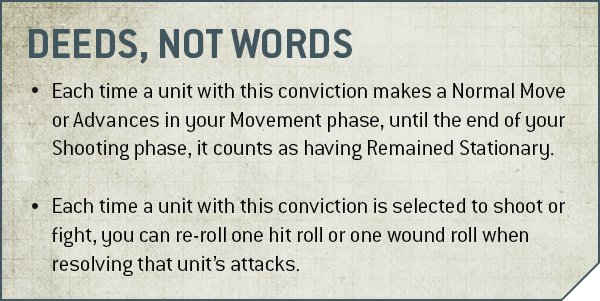 Remaining Stationary for the purposes of shooting means you can fire your weapons at full effect – even if you’ve moved in this case. And these ladies are extra accurate, too. 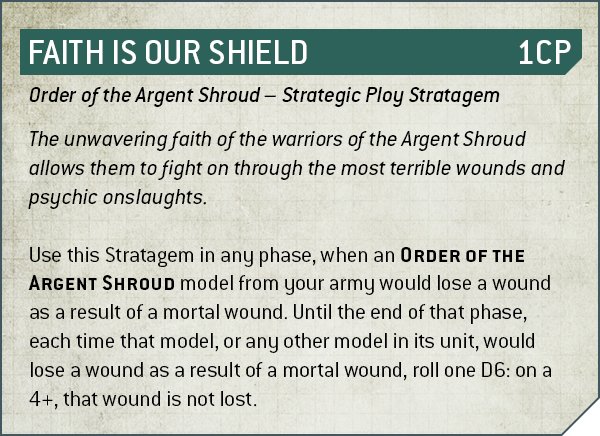 They also get some extra protection vs mortal wounds, too. 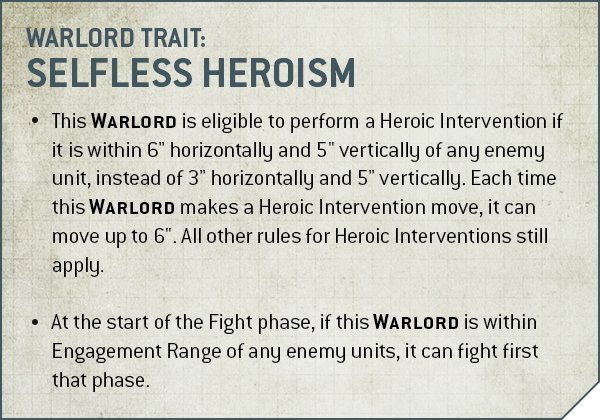 Their Warlord also wants to get into combat and fight heroically. And she’ll be swinging first on top of that.

A “force of serenity who sing hymns of hope and salvation” during battle, these ladies exude a calm collectiveness during the heat of battle.

A way to snag some bonus Miracle dice AND auto passing Combat Attrition? Watch out for this one. 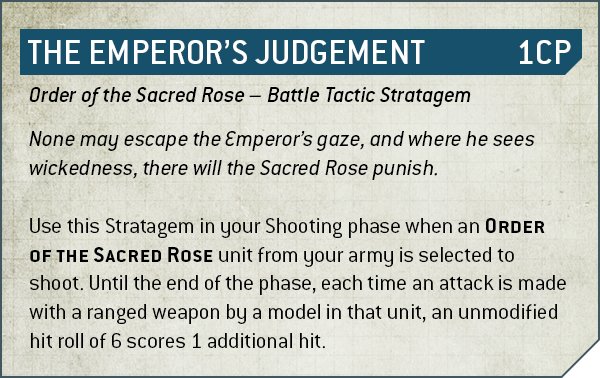 When the Emperor casts his judgement on you that means these sisters are going to score extra hits.

“So holy is the light that pours from the Sacred Rose’s most devout commanders that their mere presence on the battlefield inspires fellow Sisters to greater acts of bravery.” 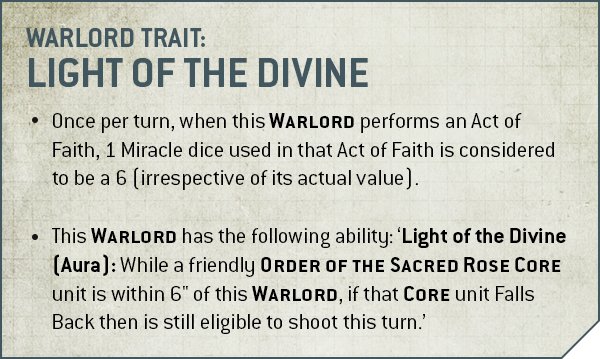 These six orders aren’t the only ones either. There are “Uncounted Orders Minoris” that fight for the Emperor as well. These function like you would expect for a new codex. You’ll get to create your own by selecting two convictions from a list of 16. Here’s an example of two below: 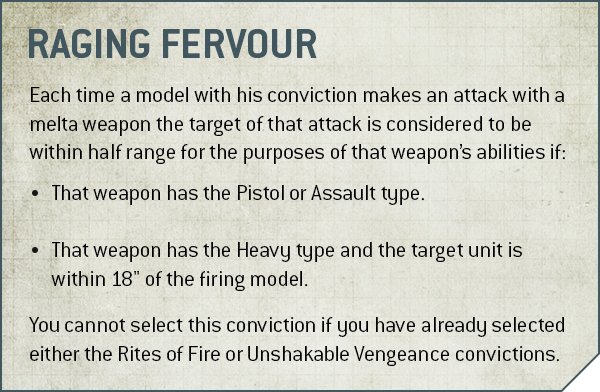 The Sisters Codex is up for Pre-order this weekend!

Author: Adam Harrison
Writer, Editor, Texas Native, and Austinite for 15+ years, Adam covers all things Tabletop Gaming. Which includes Warhammer 40,000, Age of Sigmar, D&D, Board Games and everything else that involves dice, boards, cards and a table. A hobbyist, player, and collector of miniatures and games, Adam's current obsession are his Death Armies for Age of Sigmar, his Blood Angels and Tyranids for 40k, and his ever growing Arkham Horror: The Card Game Collection.
Advertisement
Games Workshop Miniatures Rules Sisters of Battle - Adepta Sororitas Tabletop News Warhammer 40k Warhammer 40K 9th Edition
Advertisement 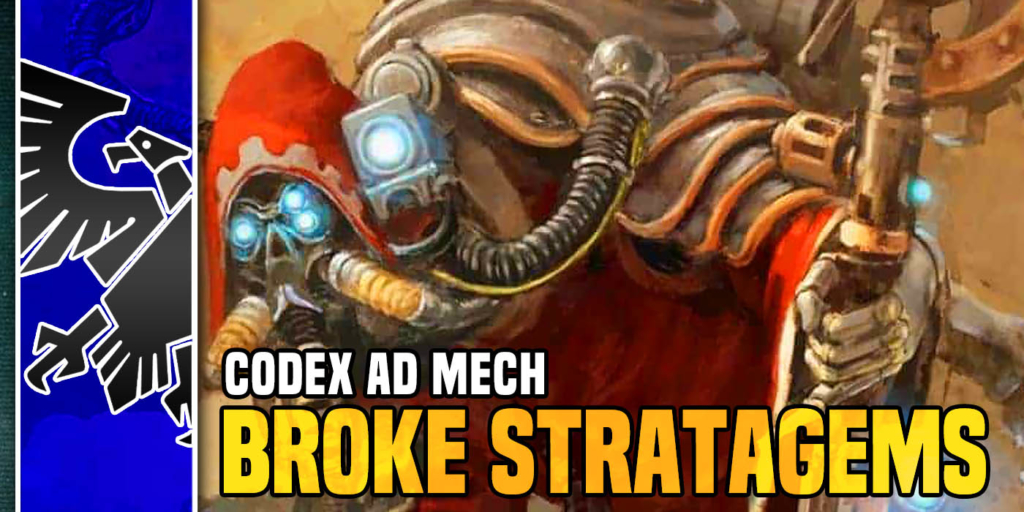