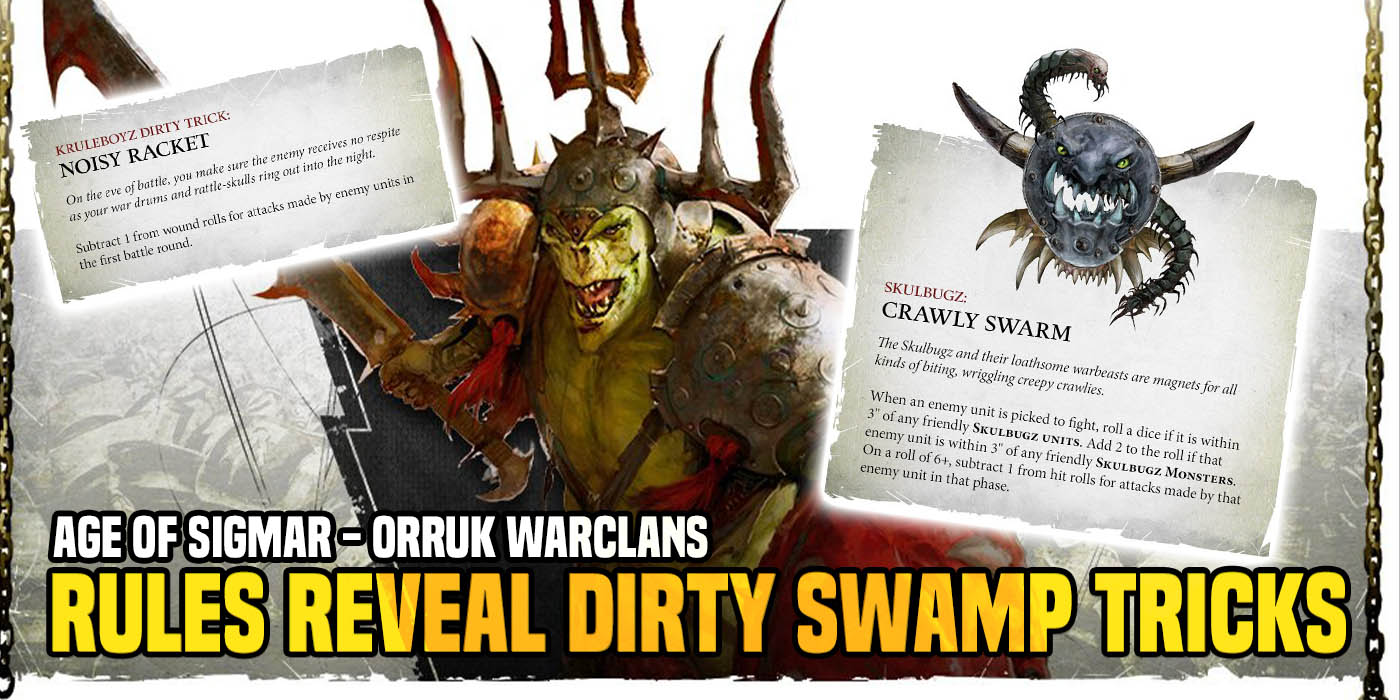 You don’t want to mess with the Kruleboyz or the rest of the Orruk Warclans down in the swamps. They have some mean tricks to play.

The Orruk Warclans are getting a new Battletome very soon and that means they have some new tactics coming soon. Today, we’re getting a look behind the kunnin’ plans they are making with a look at some new abilities. Let’s get right into it. 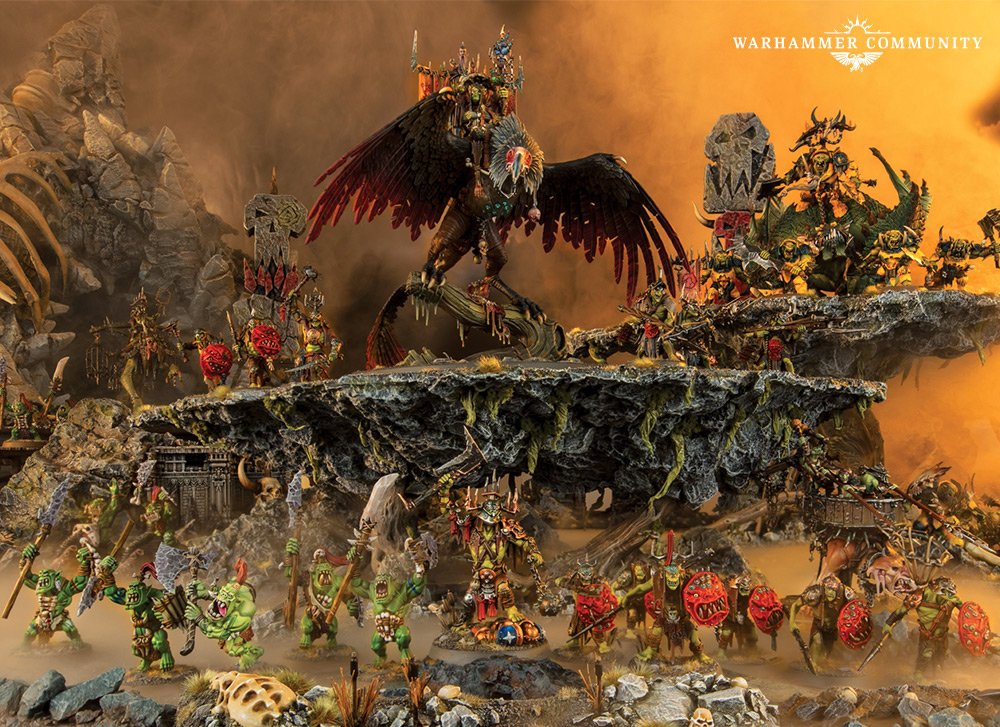 “Not only can you build a strong army with one of the three individual subfactions – the Kruleboyz, Bonesplitterz, or Ironjawz – each with their own powerful allegiance abilities, but you can combine them into an almighty Big Waaagh! which offer orruk generals a whole host of powerful rules.”

To kick things off, we’re taking a look at the new Orruks from the Swamp – the Kruleboyz. They are getting some new warclans of their own and we’ve got a preview of one in particular. Known as the Big Yellers warclan (on account of their bright “yeller” shields) this warclan can improve the Kruleboy shooting even further. 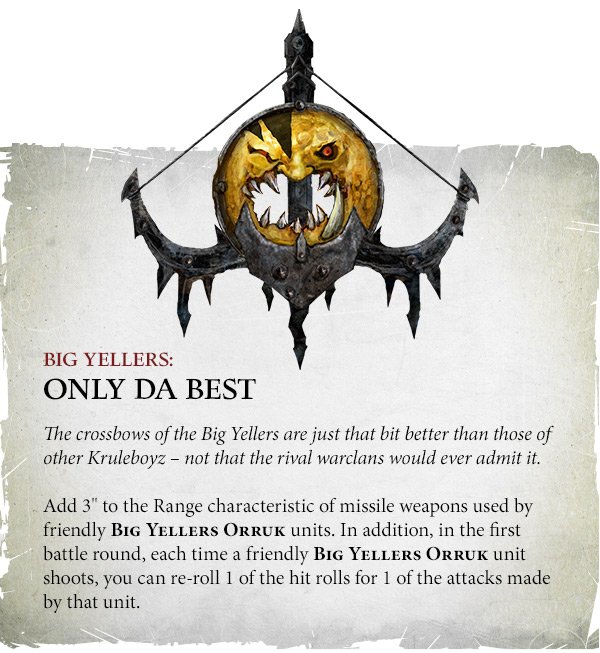 While it might be true that the Red Ones Go Fasta, the Yellow Ones always seem to have the Phat Loots. The Big Yellers get to launch more accurate volleys at a longer range (well, more accurate for the first battle round at least). Still that 3″ extra range could come in handy! But they aren’t the only Warclan getting a tease… 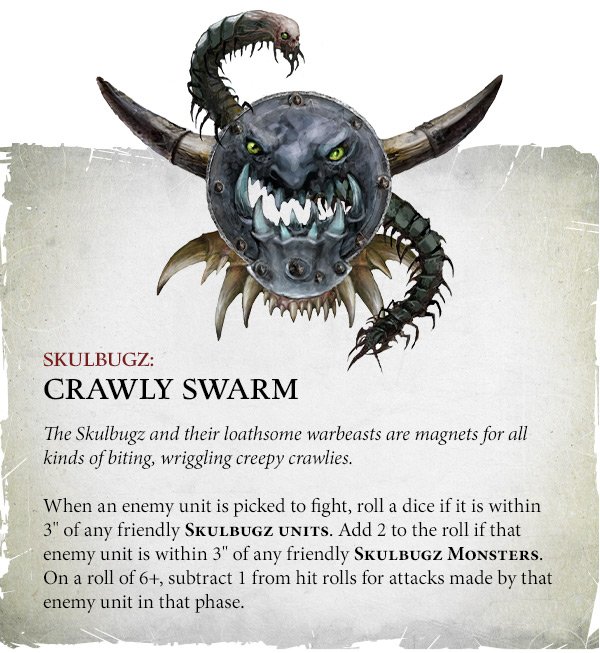 This ability is a pretty gnarly way to penalize your opponent. It’s a -1 to hit rolls on a 6+, and it’s better against anything attacking a Skulbugz Monster. That could add some value to those big hitters.

“Ever the opportunists, Kruleboyz also employ an impressive selection of underhanded tactics to get an edge, called Dirty Tricks. Noisy Racket caught our attention, and it shows how prolonged terror tactics can fatigue even the strongest enemy. “

Alright, this one is pretty mean as well. These Dirty Tricks the Kruleboyz can pull could be very helpful like Noisy Racket here. A -1 to wound on the first battle round is a great way to soften the damage you might take in the first round. 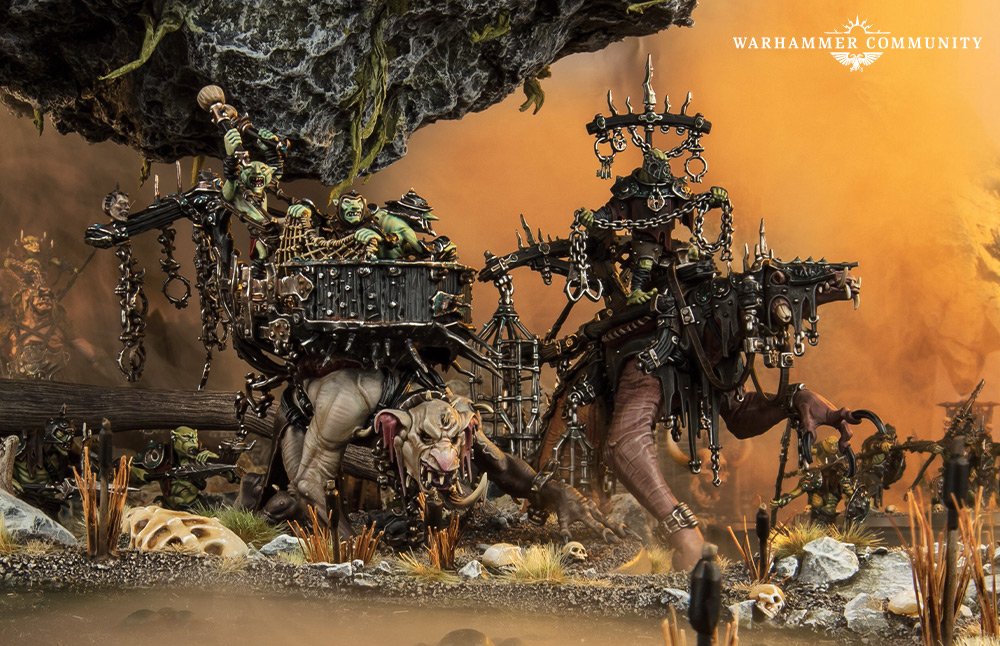 The new Battletome isn’t *just* new stuff for the Kruleboyz either. One example of new rules are updates for their larger selection of mounts – like the new Smelly ‘un rule: 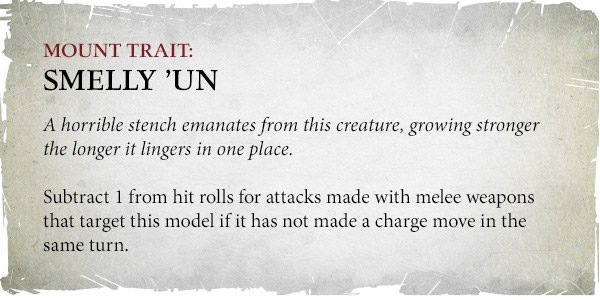 This is perfect for those big beasts that might get charged a lot or may have been stuck in a protracted combat. It’s another -1 to hit. Are we sensing a theme yet?

“If you want to take orruks from the Kruleboyz, Ironjawz, and Bonsplitterz, the new battletome gives you the rules to gather a Big Waaagh!. When all of the subfactions are combined, your army is kunnin’, brutal, AND savage all at once. “ 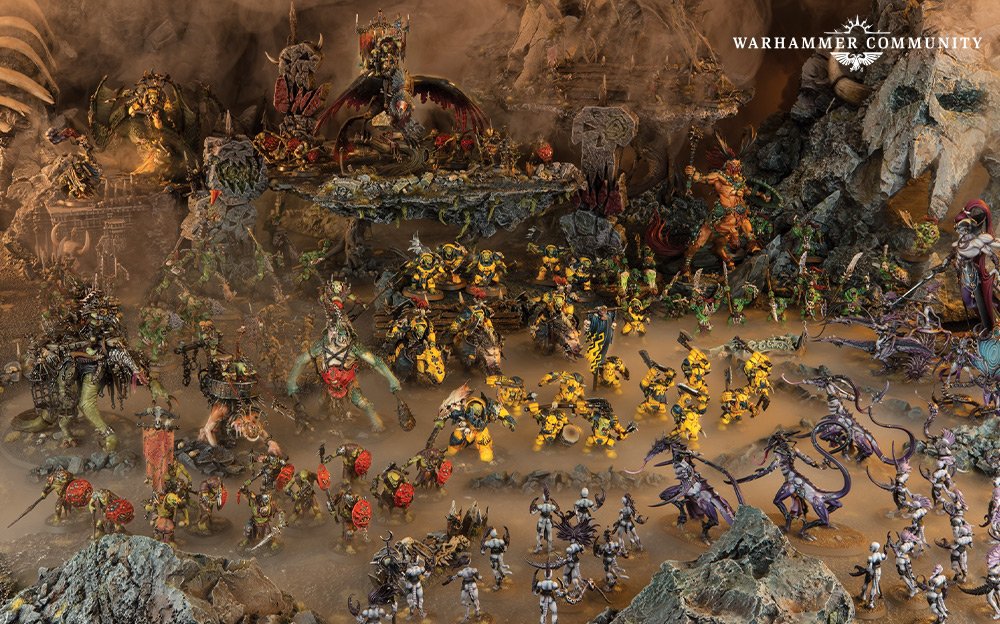 Oh and those subfaction battle traits? “Each of the three retains their best abilities.” Surprise! I’m very curious about how those traits will stack-up.

So how will the Big Waaagh! function? Similiarly to how they are currently working but here’s a bit more detail:

“As various conditions are met, like the presence of a Warchanter or getting the boyz stuck in, you accumulate Waaagh! points with which you get access to a range of dizzying buffs.

You’ll start by gaining a little extra speed, before increasing your hitting power, and finally earning the ability to blow all your points in an onslaught of manic fury. “

Sounds familiar, right? How about an example power? 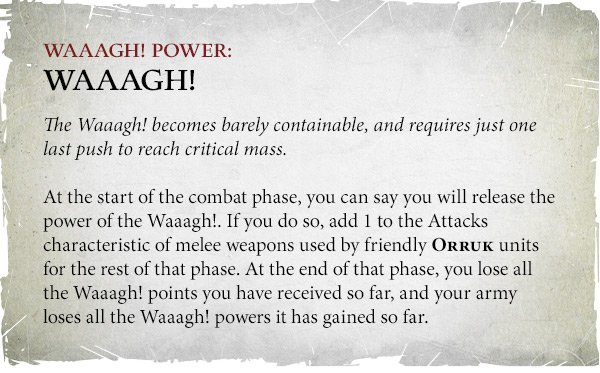 That’s a pretty big swing so just make sure you make it count! If you like the idea of running a combined force of Ironjawz, Bonesplitterz, and Kruleboyz then get ready. The new Battletome is coming soon! 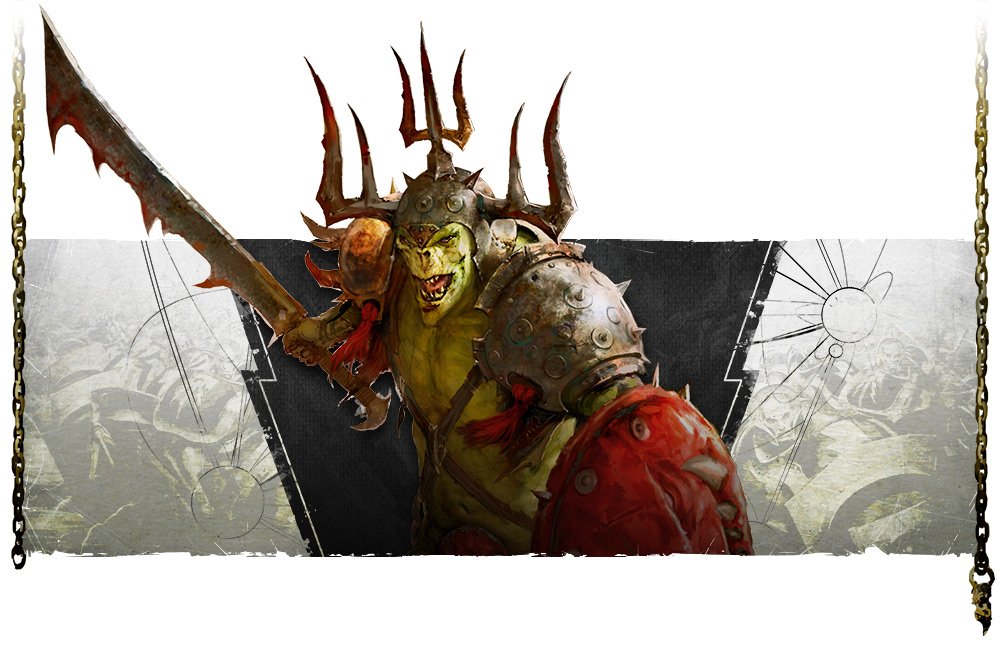 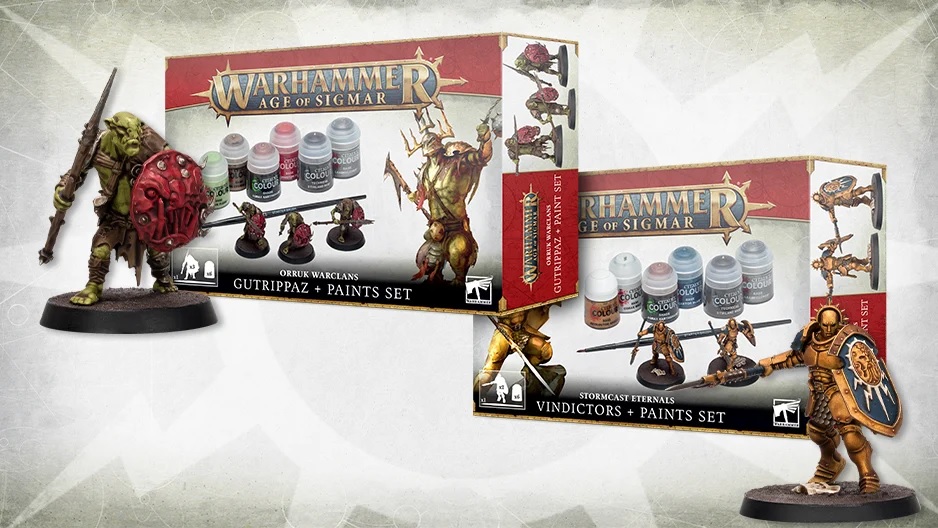