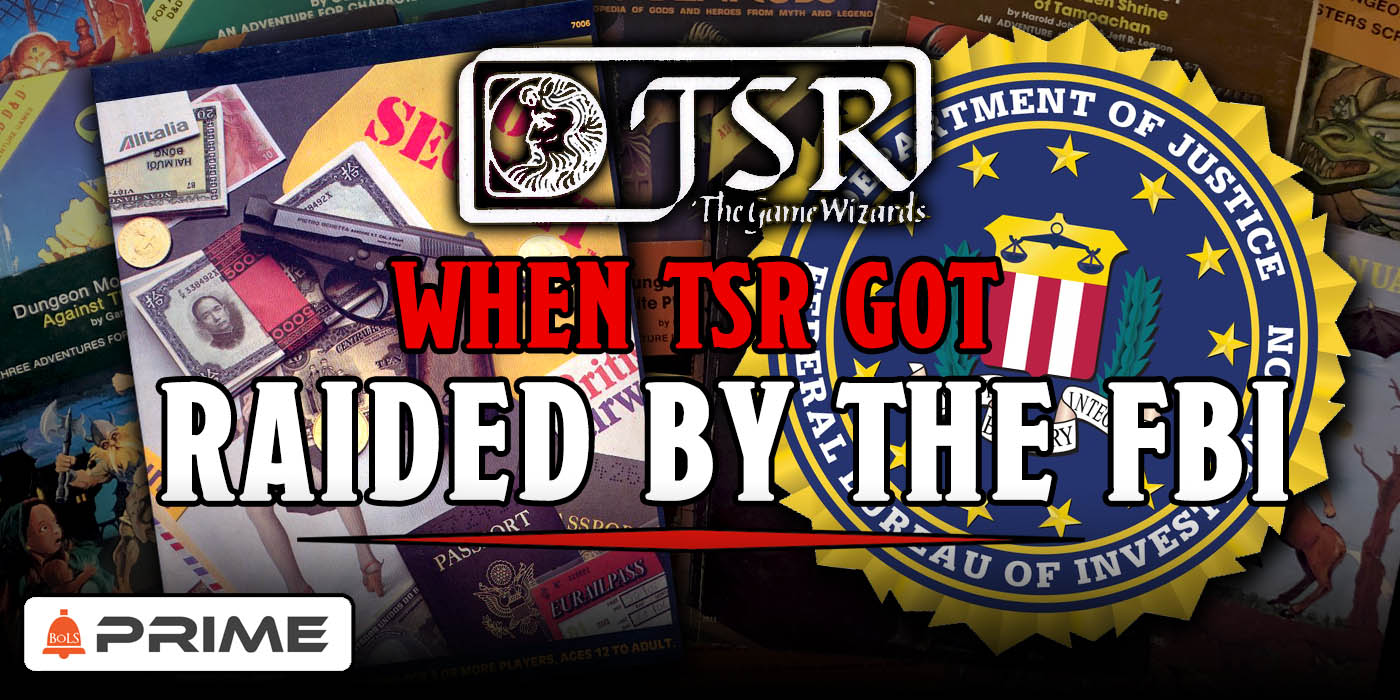 Yes, the satanic panic gripped the nation and got D&D books banned, but another RPG had a brush with authority. Here’s why the FBI raided TSR.

On January 17th, 1980, FBI agents were deployed to a small business in Wisconsin in order to investigate a potential assassination attempt against an American executive named William Weatherby who was believed to be in Beirut, Lebanon. The FBI, acting on intelligence passed to them by local law enforcement–a tip that a concerned citizen had, by chance, come across–launched a daring raid in order to protect the life of Mr. Weatherby.

The only problem was Mr. Weatherby didn’t exist. He was made up, as was the plot against him. It was all a part of the playtest for TSR’s upcoming game, Top Secret. 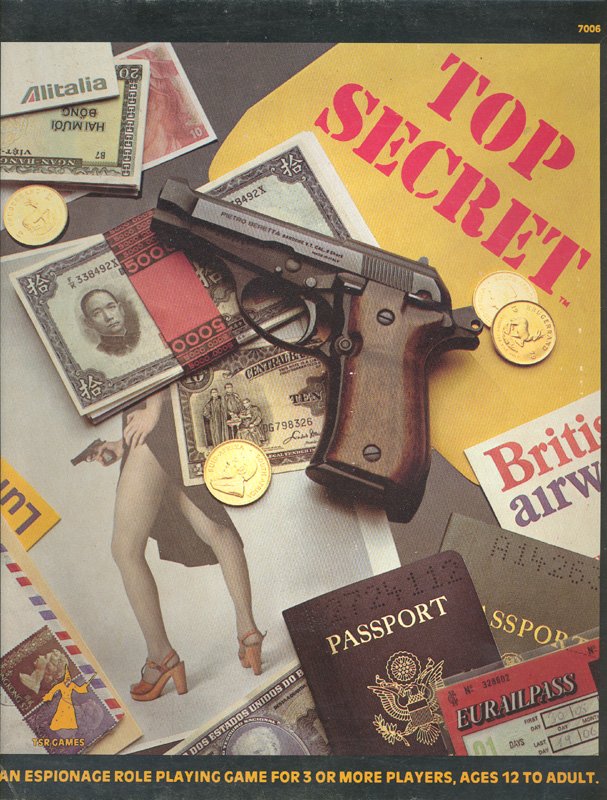 The evidence, that had so dutifully been passed on to the FBI, was a description of the plot to take out Weatherby, written on TSR stationary. The ‘raid’ such as it was, consisted of two whole FBI agents who found no gunpowder plot, no poisoned pens, no secret bombs–just a bunch of nerds working on developing roleplaying games. But the FBI’s raid was great marketing material for TSR, and it was all thanks to the “realism” of Top Secret. 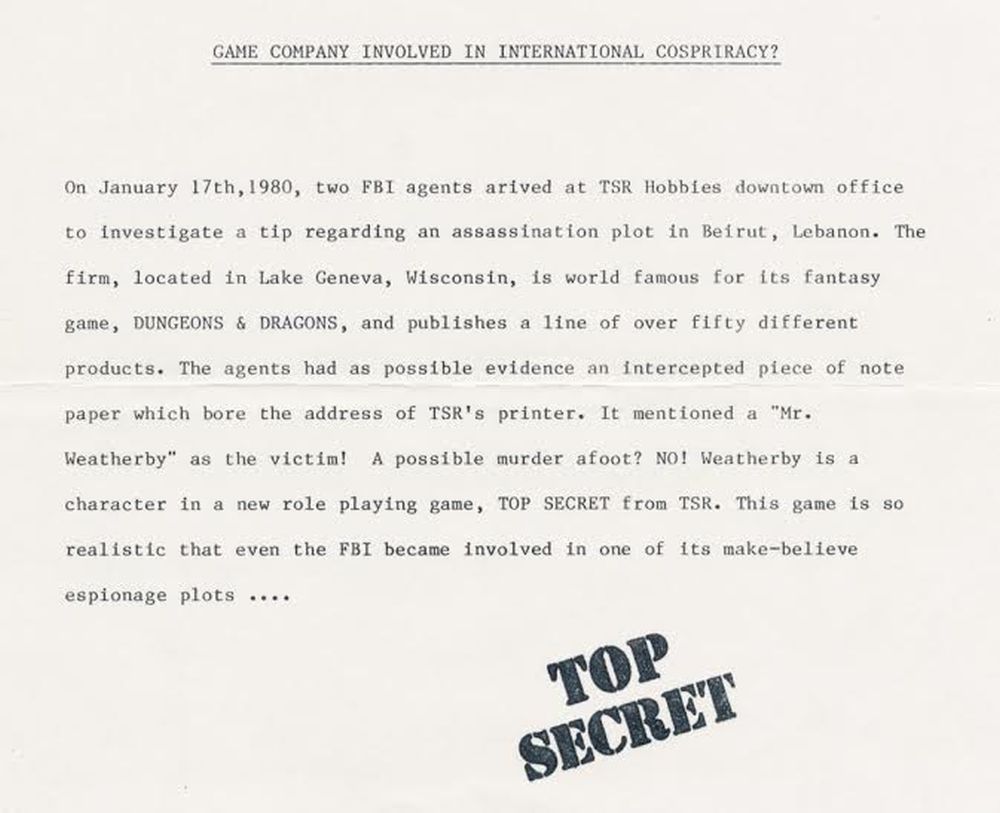 Top Secret is one of those games that likely couldn’t have existed in any other time. It came along between the release of 1st Edition Dungeons & Dragons but before the rise of the Sons of Aryas. Which is to say, it happened while the Cold War was still ongoing when James Bond movies and spy fiction gripped the nation in a way that it doesn’t quite today.

This may be in part because our faith in governments and their intelligence agencies has been rocked by scandal after scandal after international incident that, like many things in the real world, are messy affairs with no clear “good” or “bad” actors. But in the wild days of the 80s, spies and secret agents took on the enemies of the world. Top Secret was the first RPG to try and bring the experience of a James Bond or a Napoleon Solo or a John Steed or Emma Peel to the tabletop. At a time when RPGs were interested in pseudo-medieval fantasy or the star-faring swaths of science fiction, Top Secret stood out because it wanted to deliver a more modern (but still heightened) experience. 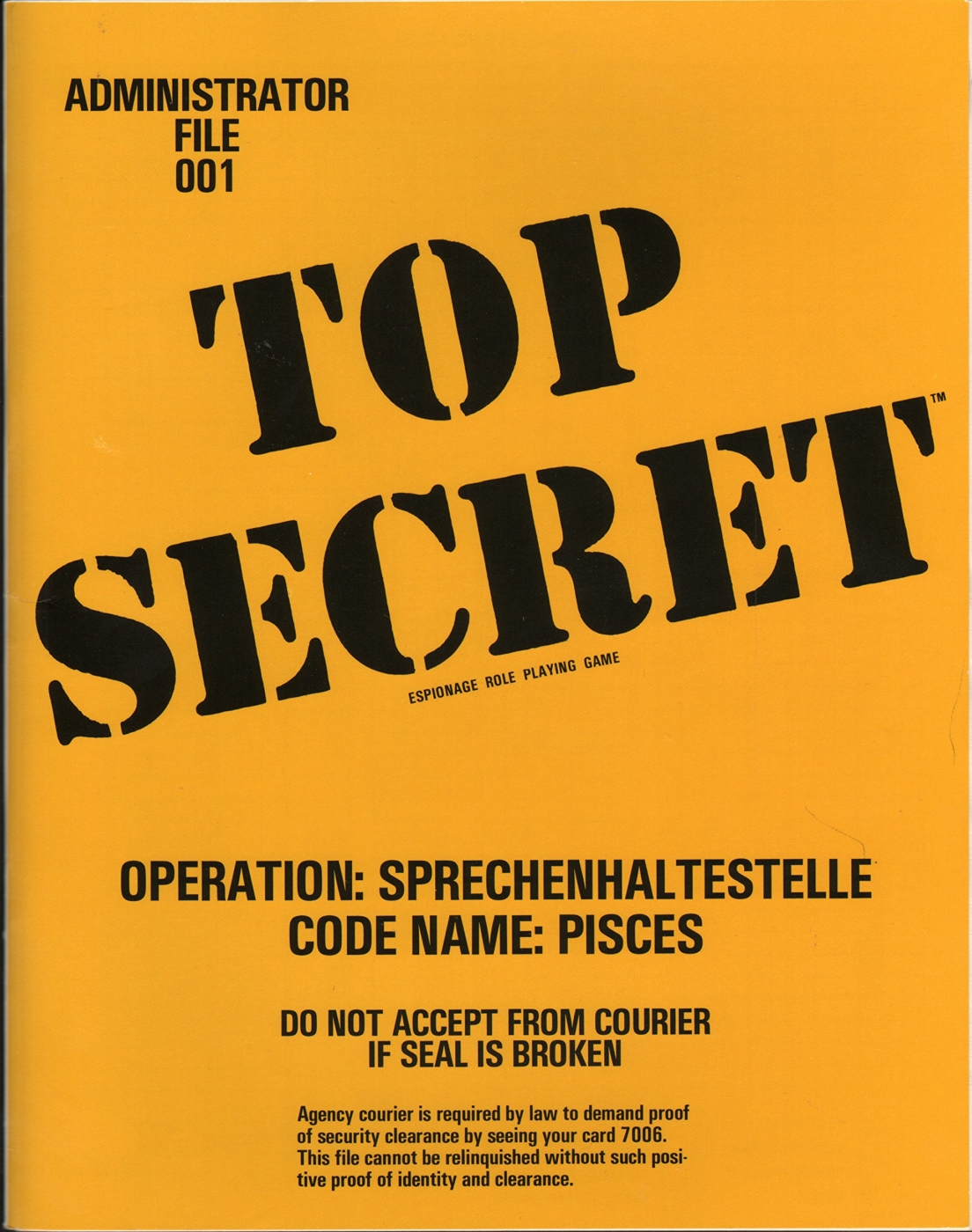 It was also not the last time a state government would raid the offices of an RPG publisher, but that’s a story for another time. For now, let’s stick with Top Secret. Developed by Merle M. Rasmussen (who is still around and making a Top Secret game today), the original Top Secret came as one of TSR’s premiere boxed sets. It came with a 64-page rulebook and a pre-made adventure: Operation: Sprechenhaltesetelle, which would send players on a wild adventure through a Casablanca-esque playground of spies, defectors, traitors, and double agents.

The game itself used the percentile system that TSR used in its non-fantasy games. And Top Secret did a lot of work for early game design as a system that was more skill-based than class-based. You would pick up “Areas of Knowledge” that added to your abilities in the game which were determined by the kind of bureau you worked for. 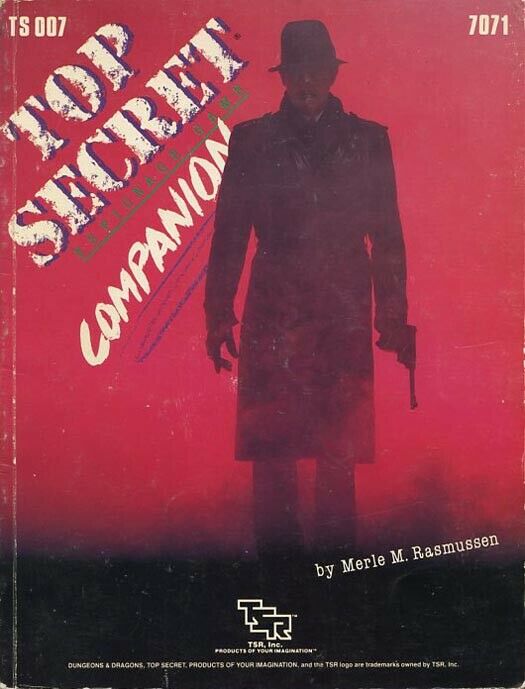 In Top Secret players were employed by some unspecified espionage agency that had three bureaus: assassination, confiscation, or investigation. Depending on what you chose, you might have a different set of skills and challenges to work from. But the skill-based system was lacking after the initial release. Which led to Rasmussen and TSR to develop an expansion, the Top Secret Companion. The Companion added back in character classes and new abilities and streamlined the combat while adding new weapons.

All of which was to say that the game went from being a little more George Smiley to being a little more James Bond. Which was exactly what the audiences wanted. This was a game about superspies and secret agents in dashing tuxedos. And it teaches us a valuable lesson:

If you’re going to write out your campaign notes, maybe don’t leave them lying around on stationary that bears the company name and address.

Author: J.R. Zambrano
Bell of Lost Souls Staff Writer and DM, J.R. covers RPGs of all stripes and on occasion eats sandwiches. You can ask him about either at [email protected]
Advertisement
BoLS BoLS Prime RPGs
Advertisement 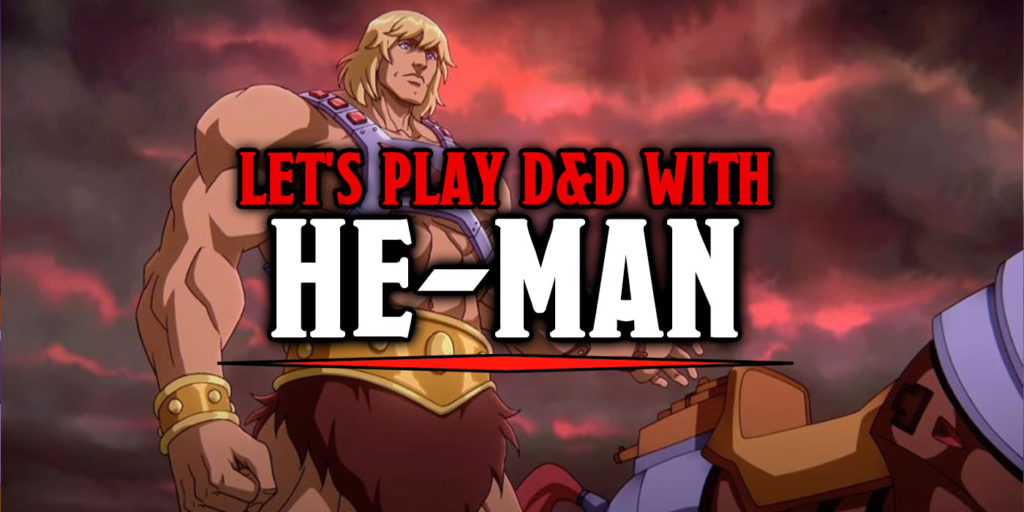