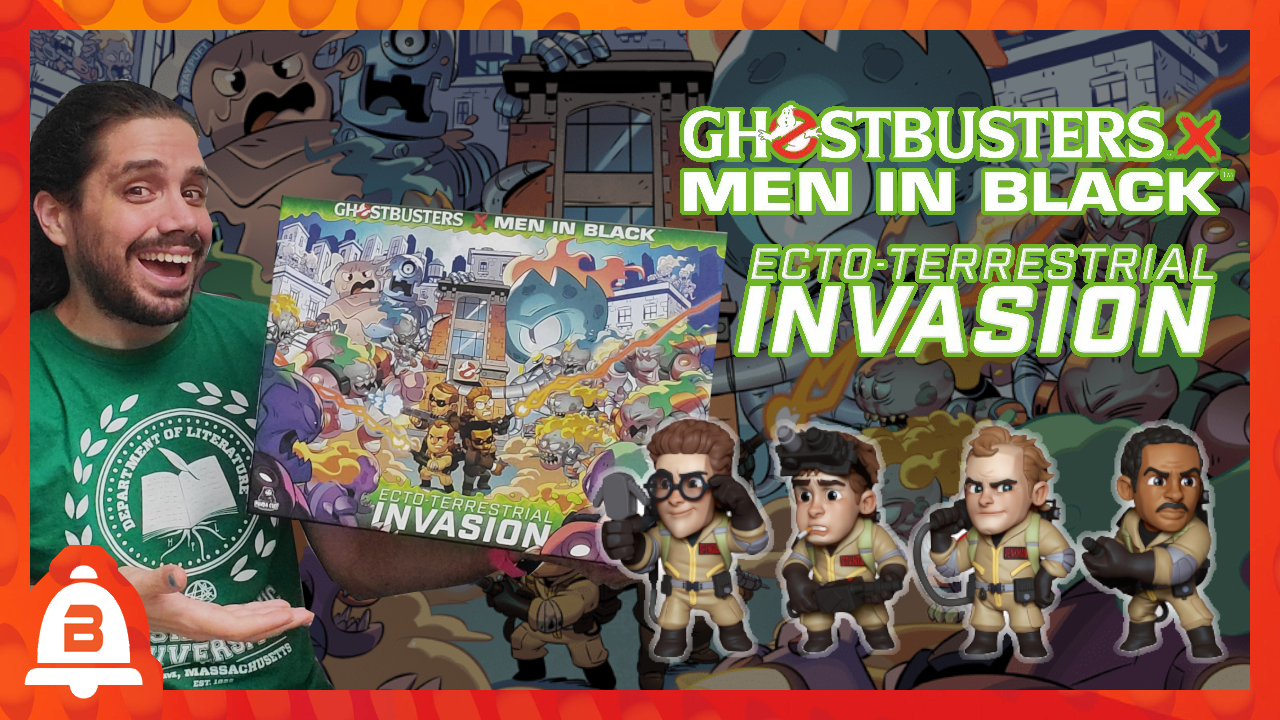 Some crossovers seem out of place, like The Punisher in Archie Comics.  But this one makes so much sense, I wonder why it’s only happening just now.

Like any product of my generation, I’m a huge fan of Ghostbusters and of Men in Black. In fact, Men in Black was the first VHS I ever bought with my own allowance. So it’s got a fond place in my heart. You can only imagine the sheer glee I felt throughout my entire body when I saw the IDW was making a crossover game with my two favorite sci-fi franchises.

Ghostbusters x Men in Black: Ecto-Terrestrial Invasion is a semi-cooperative tactical combat game. It’s got a campaign-style setup, with the players working through 3 Episodes per campaign, with a boss fight after each episode (so it’s more like 6 games per campaign). While each scenario has its own win/loss conditions which affect all players equally, each player is also trying to score the most points in order to earn the coveted Employee of the Week badge. 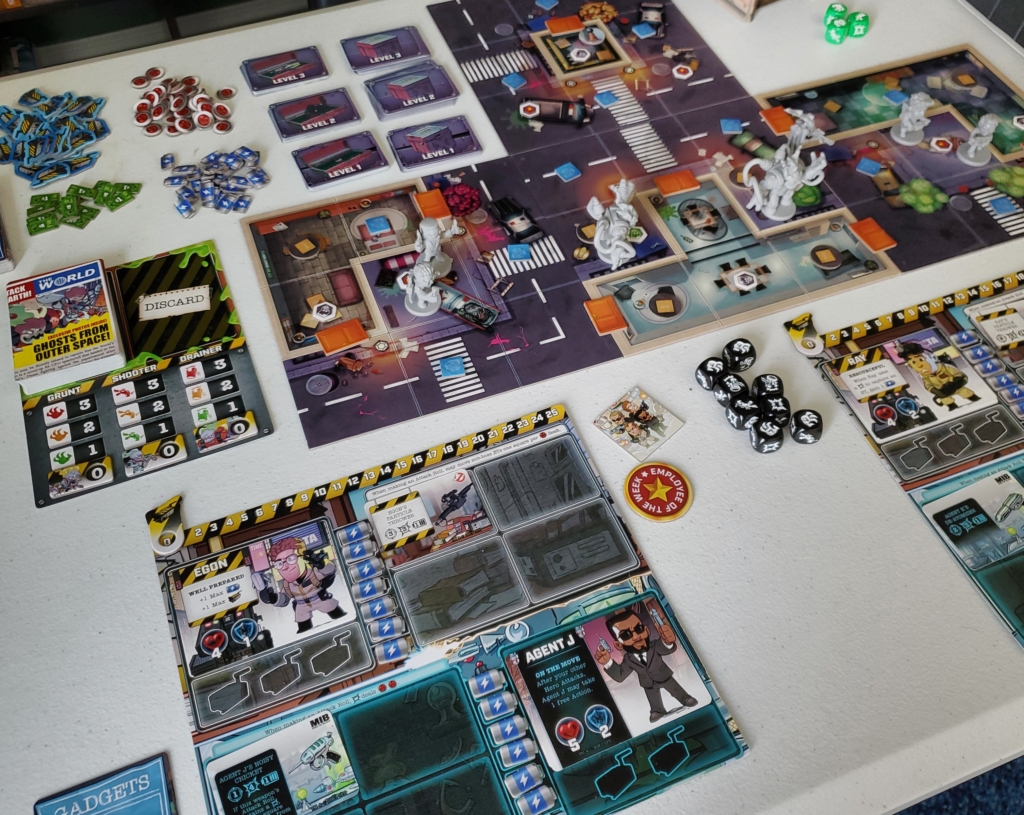 If someone asks you if you’re a god, you say YES!

Each player controls a team of 1 Ghostbuster and 1 MiB agent. Each hero, as you’d expect, has a unique ability and stats. And with a selection of 14 different heroes to choose from with the full box, there are plenty of different combinations to make up your team.

Within each scenario, the base rules are the same. Each player takes their turn, making up to 4 actions divided between their heroes, and before or after that, makes their attack for the turn. Each time a player attacks, they spend the required battery tokens for their weapon and choose a square within range. The hero rolls however many dice is listed on that weapons and for each symbol on their die results, they can attribute 1 damage to the matching alien in that square; Either a Grunt, Shooter, or Drainer. The explosion symbol is wild.

A person is smart.

Once each player has taken their turn, the Hot Sheets Phase begins and a Hot Sheet card is drawn. These cards can result in a wide variety of effects, some good, some bad, some a bit of both.

But this where the best mechanic of the game comes into play. In the top corner of each Hot Sheets card is a symbol. For each of those symbols, the matching PKE Level token is raised by 1. And if any of them reaches 3, a psychokinetic explosion rocks the Ghostbusters’ station! During setup, 8 Ship tokens are slid into the Ghostbusters’ tower and a bunch of green spawn dice were dropped into this tower. Each time a psychokinetic explosion occurs, one of these ship tokens is pulled out. Any spawn dice that come tumbling out result in new ecto-terrestrials spawning! 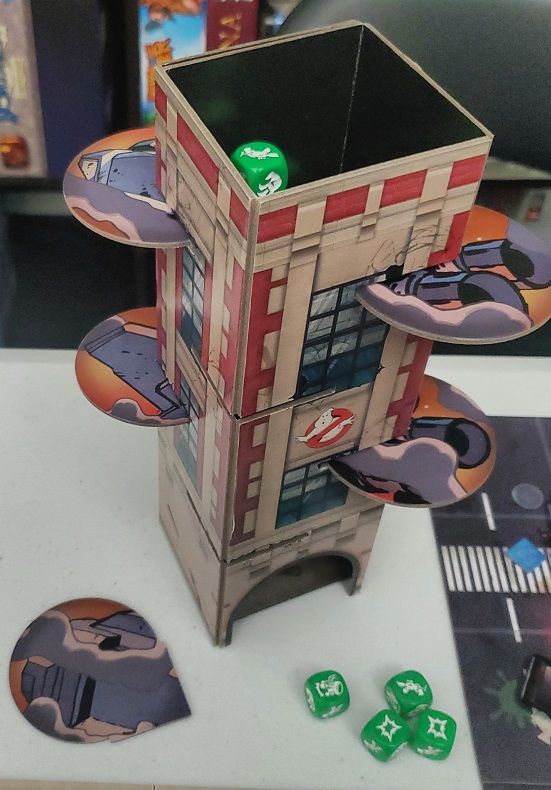 Once that’s done, the ecto-terrestrials take their turn. They each have specific rules on where and how they attack, and each attack in a different way. 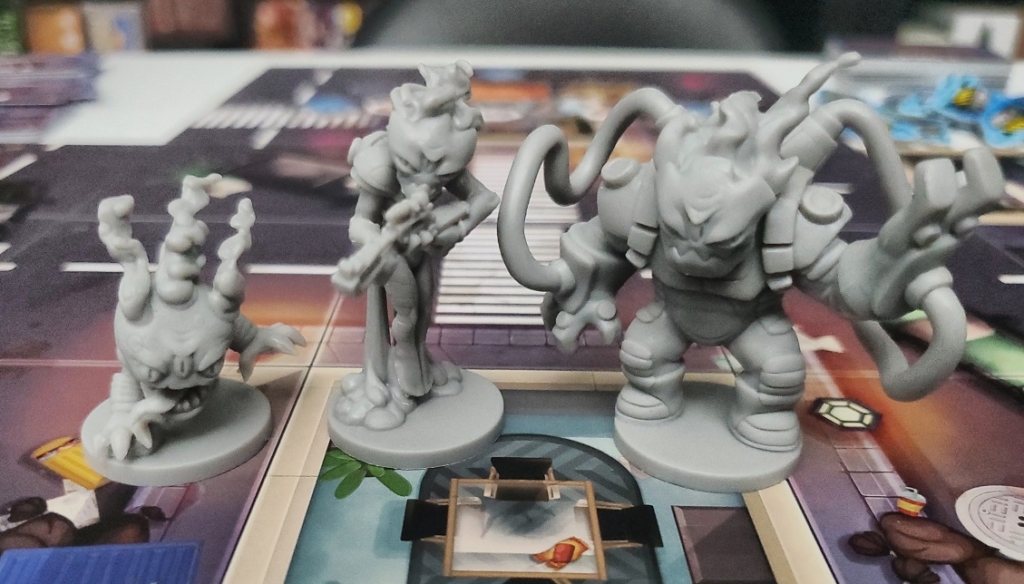 Then the round ends and the next begins. Each scenario has its own ending conditions, but anytime the Ghostbusters’ tower has no more ship tokens, the tower collapses and the players all lose!

But if successful, the players get to buy new equipment! Depending on how well they did during the mission, all players will earn money, which can be spent on various upgrades to their team. 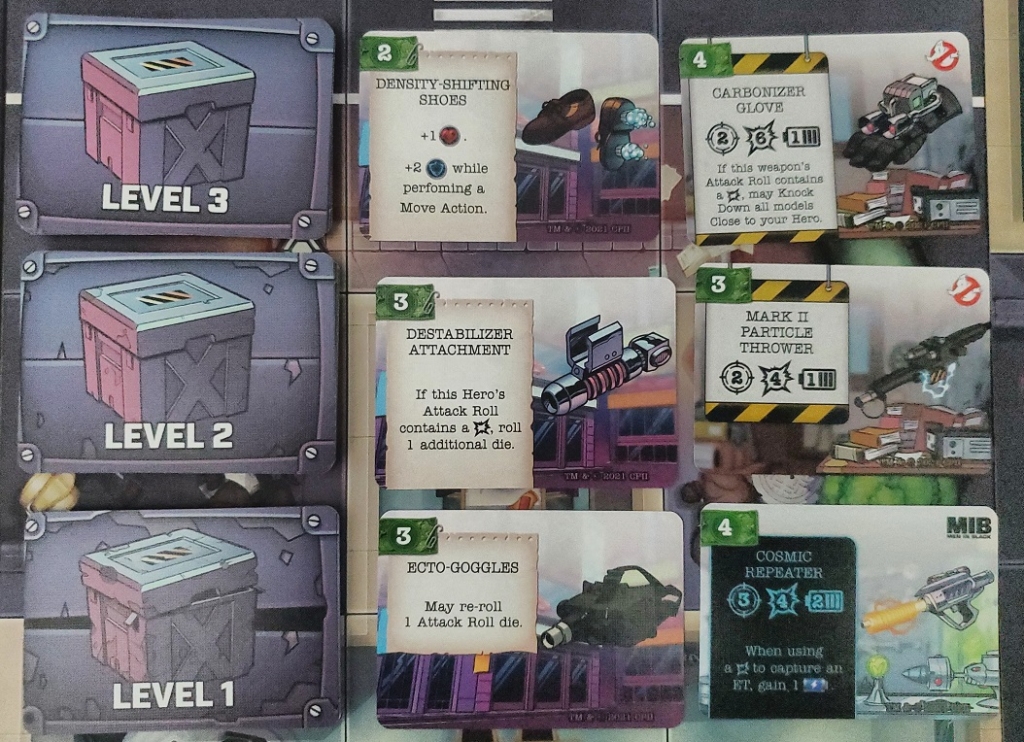 Yes, there is a Noisy Cricket.

And with their new weapons at the ready, they now get to battle a Boss! Each of these bosses has its own rules on how they function and each one is a serious challenge. 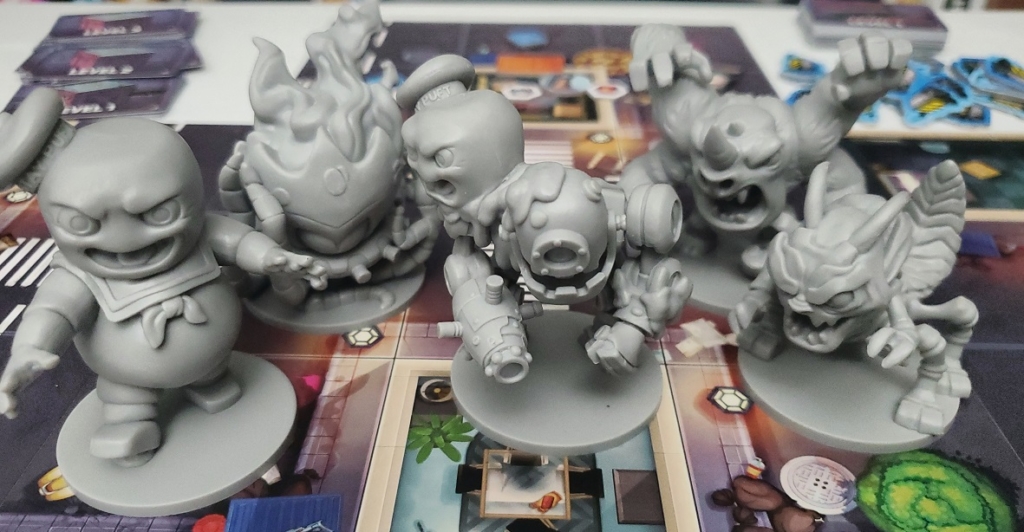 You know the difference between you and me?

Each campaign is broken into 3 episodes, but there are two options for each episode. So each time you play through the campaign, you’ll be able to take a different route and mix up the story!

GBxMiB:E-TI is a great mid-weight tactical game. So many of these games are really heavy and take so long to set up and play, but not here. The map for each mission is tight and compact with no wasted space. Plus, the option to teleport around the map means you’re rarely going to spend a turn “just moving”.

It’s true. This man has no…

Plus, there are so many hero combinations, weapons, items, gadgets (which I should have mentioned before, but my keyboard doesn’t have a backspace key. Oh well. Live and learn), which gives this game so much replayability. There are so many ways to build and grow your team with new equipment that you can have a totally different strategy with each playthrough. And you’ll want to play over and over because the game is just fun.

It’s silly, goofy, charming, and just a blast to play. The art is fantastic. The minis are outstanding. The gameplay is so streamlined and it doesn’t overstay its welcome with long, drawn-out missions. This game has so much going for it. I could go on and on. But I won’t. 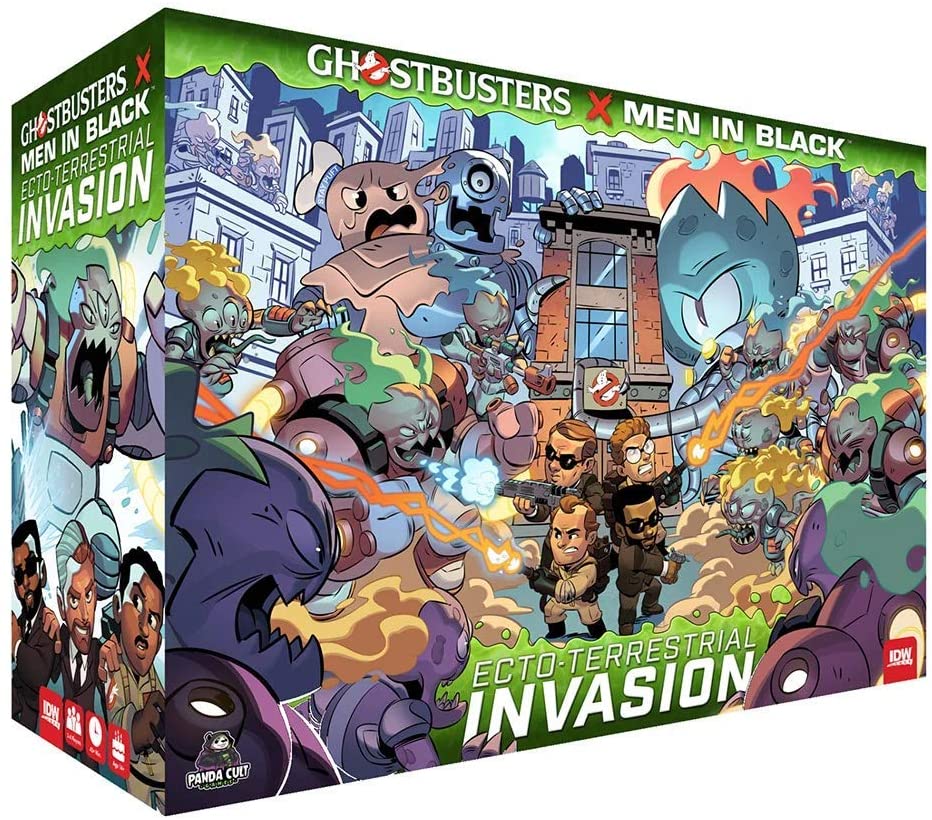 Who’s your favorite character between both franchises?
Honestly, I want to know more about Janine.

Author: Matt Sall
Matt has loved games of all kinds his whole life: board, video, war, roleplaying. He's worked as a writer for BoLS since 2017. He's worked as freelance editor for board game rulebooks and has designed many of his own games as well.
Advertisement
Board Games Miniatures Rules Tabletop News Videos
Advertisement