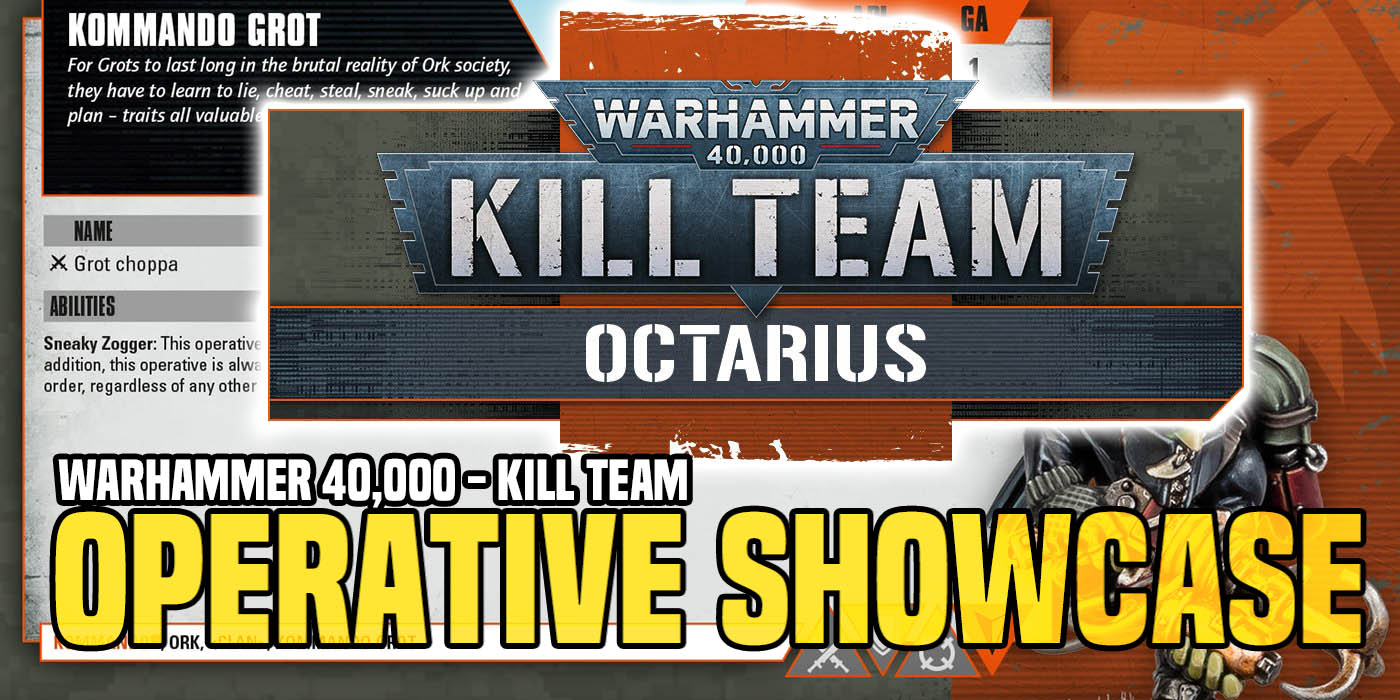 Games Workshop has released a bunch of different operative cards for Warhammer 40,000: Kill Team and we’ve collected them for your viewing pleasure.

Kill Team has some big changes ahead. If you’re curious how strike teams have changed up you’re not alone. Thankfully, GW has put out a handful of data cards for operatives from various factions. These are a pretty good indicator of some of the things we can all expect. Let’s dive in a take a look at what’s been shown off so far for Kill Team. 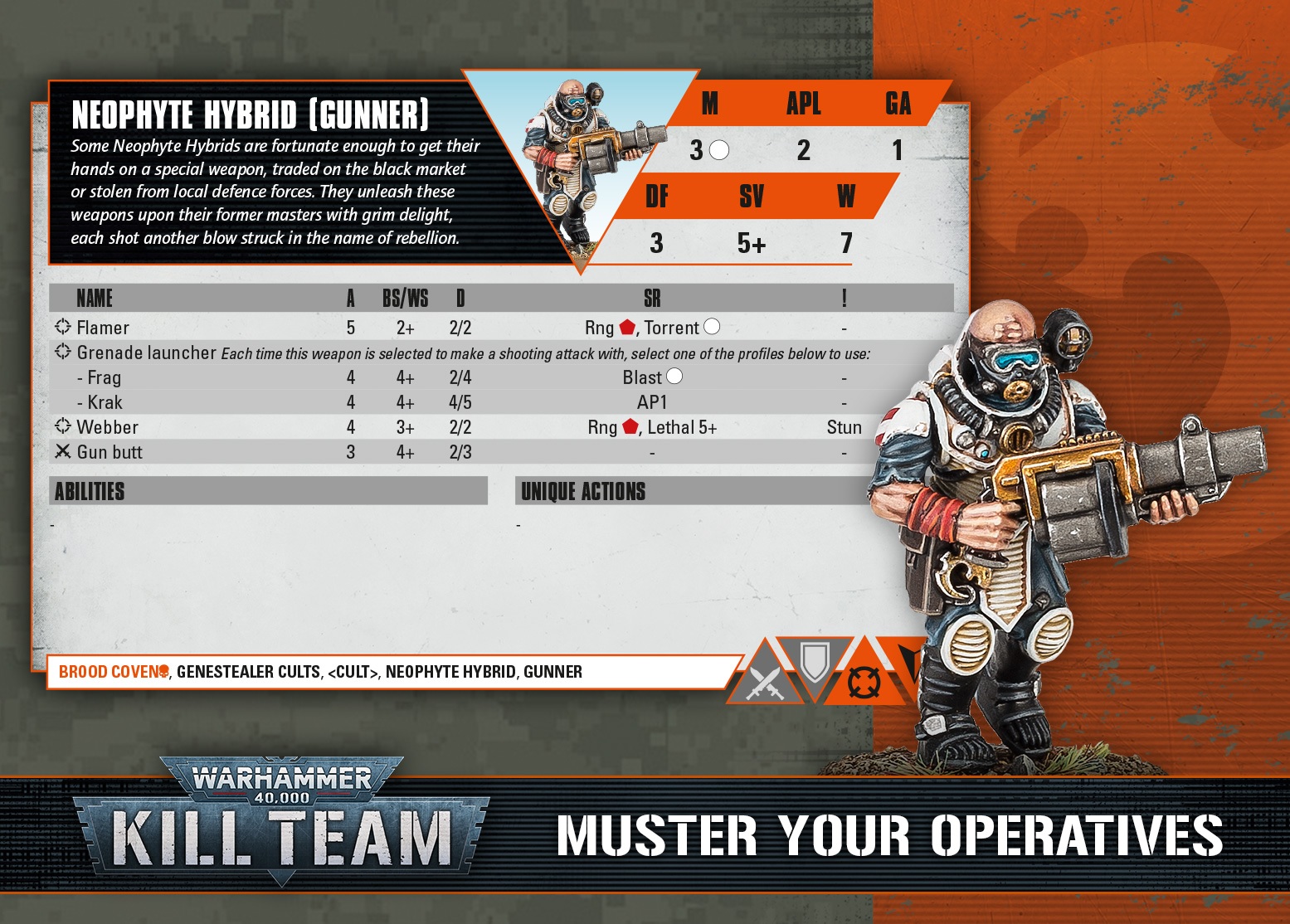 The Neophyte Hybrid (Gunner) has a fairly basic statline. That’s expected as they are really just a bog-standard citizen (ya know, aside from all the Tyranid DNA). Comparably, this Hybrid isn’t that different than a Guardsmen. Perhaps more interestingly, we get a look at some of the weapon options available. The Flamer has been teased before but now we’ve got our first indication of some more specialized wargear. The Grenade Launcher is interesting and the Webber is really unique. 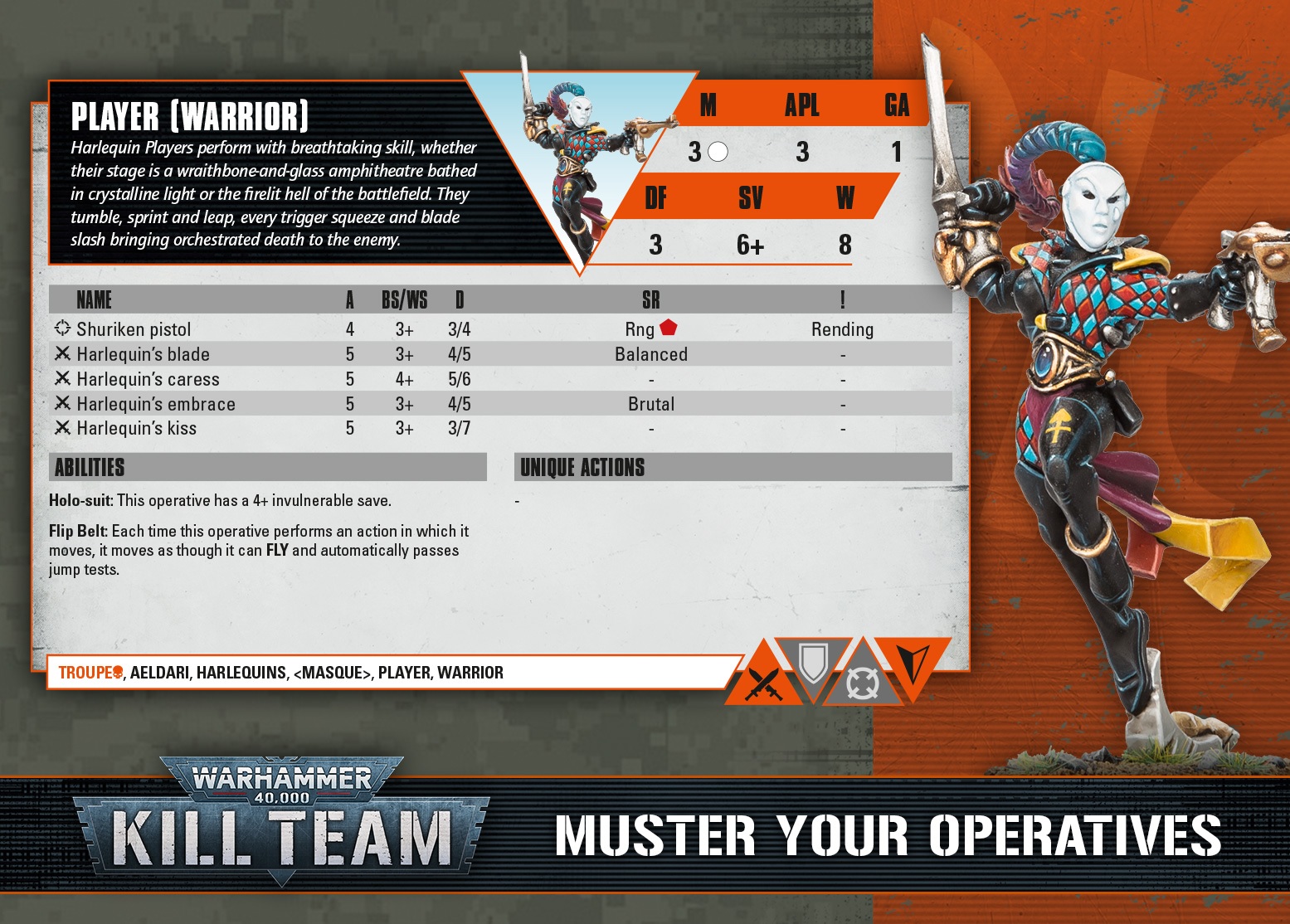 Harlequins are going to be pretty good in Kill Team. Look at that 3 APL! And don’t let that 6+ save decieve you – they have a 4+ invulnerable thanks to their Holo-suit making them pretty tough targets. Their 8 wounds is going to be nice as it’s slightly more than your typical Guardsman – but where they really shine will be their move. The flip belt gives them FLY so they should be able to move through the densest terrain with ease. And once they close, they are going to have a wide array of Harlequin’s weapons in close combat. I’m sure they will have something for whatever mission you’re on. 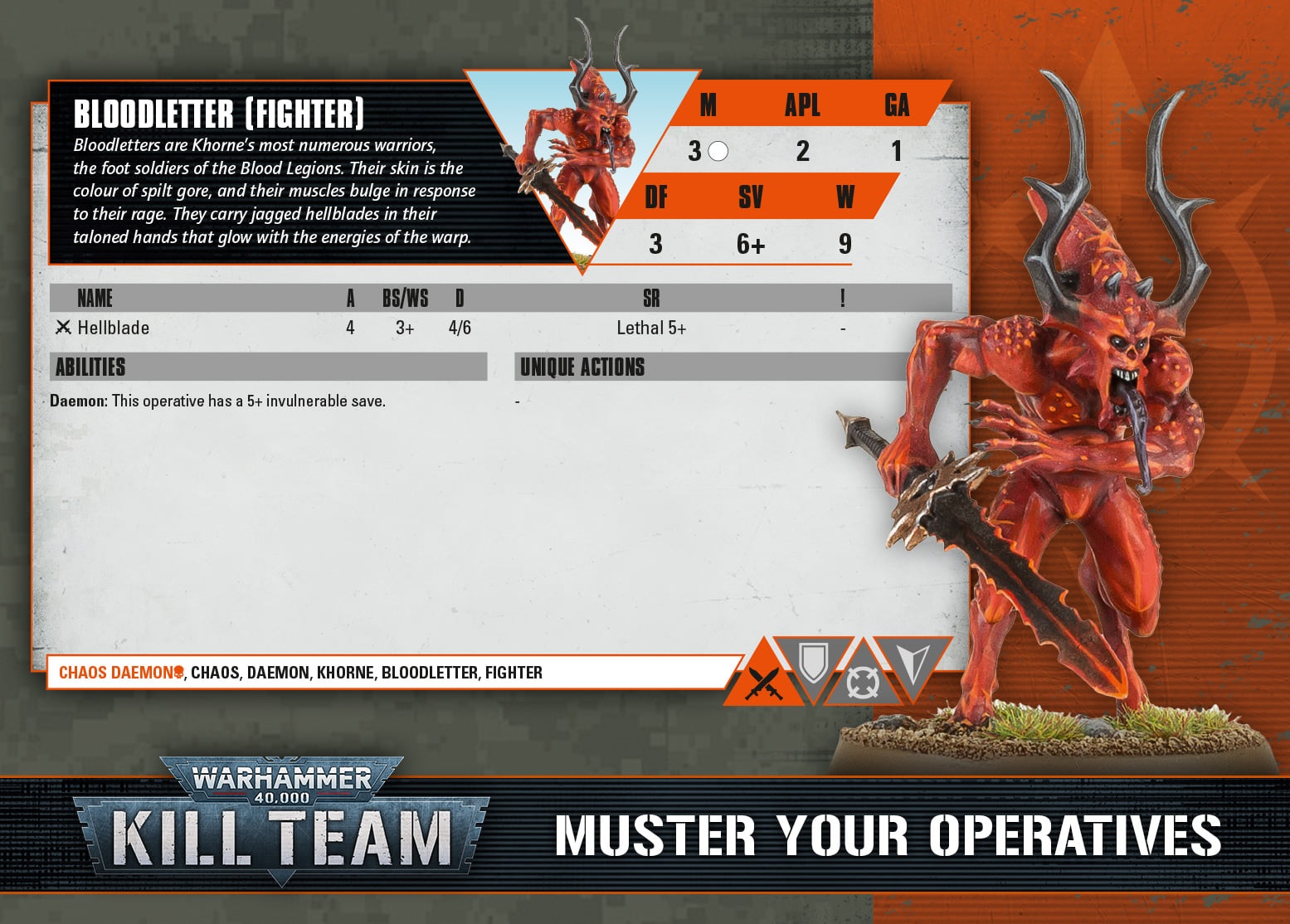 Next up, we’ve got a Bloodletter. This is our first look at a Daemon. Honestly there’s not a TON to show off – Bloodletters are pretty straightforward creatures. They want to chop off your head and are pretty good at it. Their Hellblades are kind of scary with that 4/6 damage split and Lethal 5+. Watch out for those in close combat. Additionally, Bloodletters also have 9 wounds and a 5+ invulnerable. 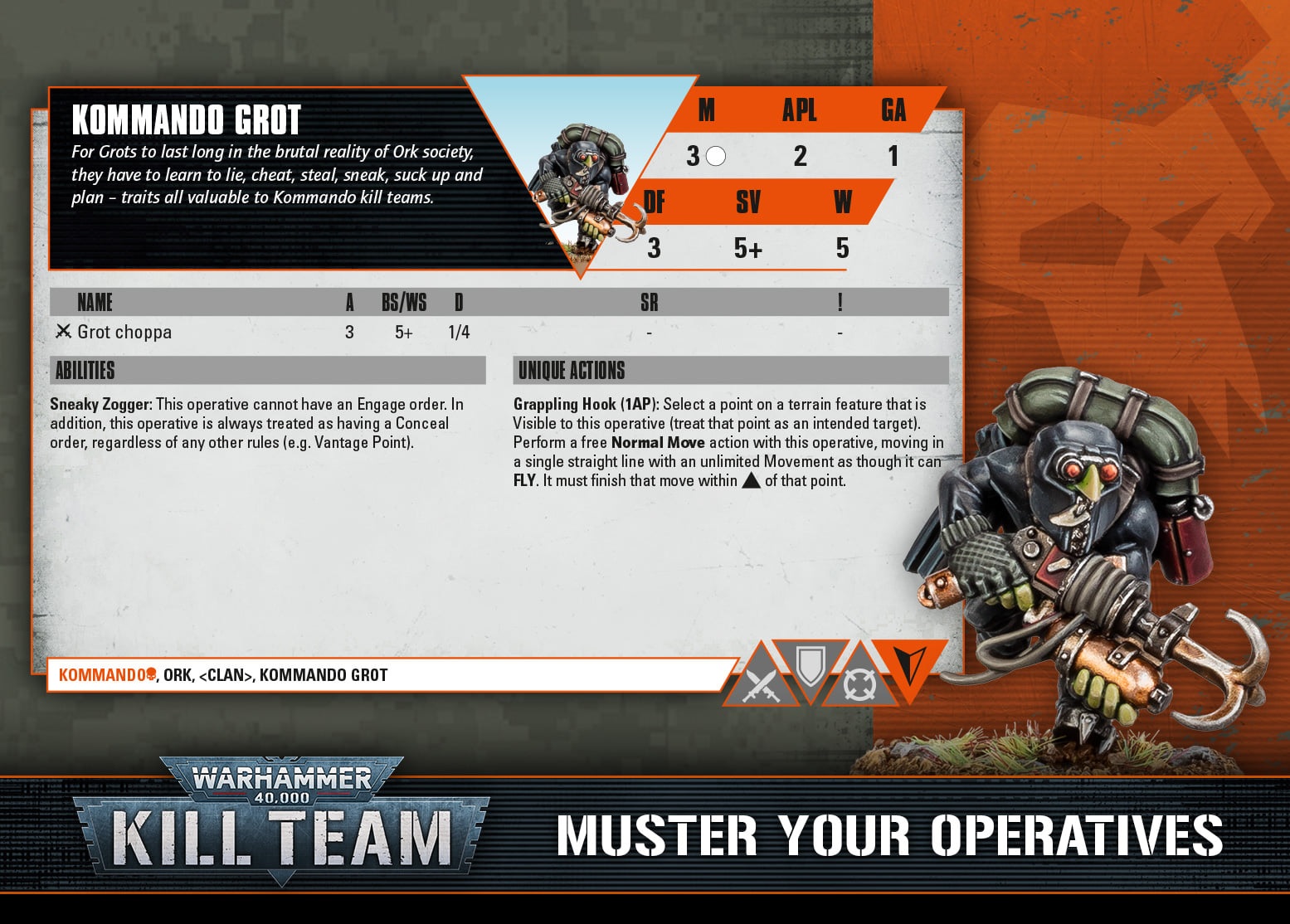 Ahhh it’s the Kommando Grot. He’s pretty cute and all but also pretty squishy. Then again, that Grappling Hook can really help him get around the board. This Grot isn’t built for combat but if you need someone to snag an objective this Sneaky Zogger is the one to do it. 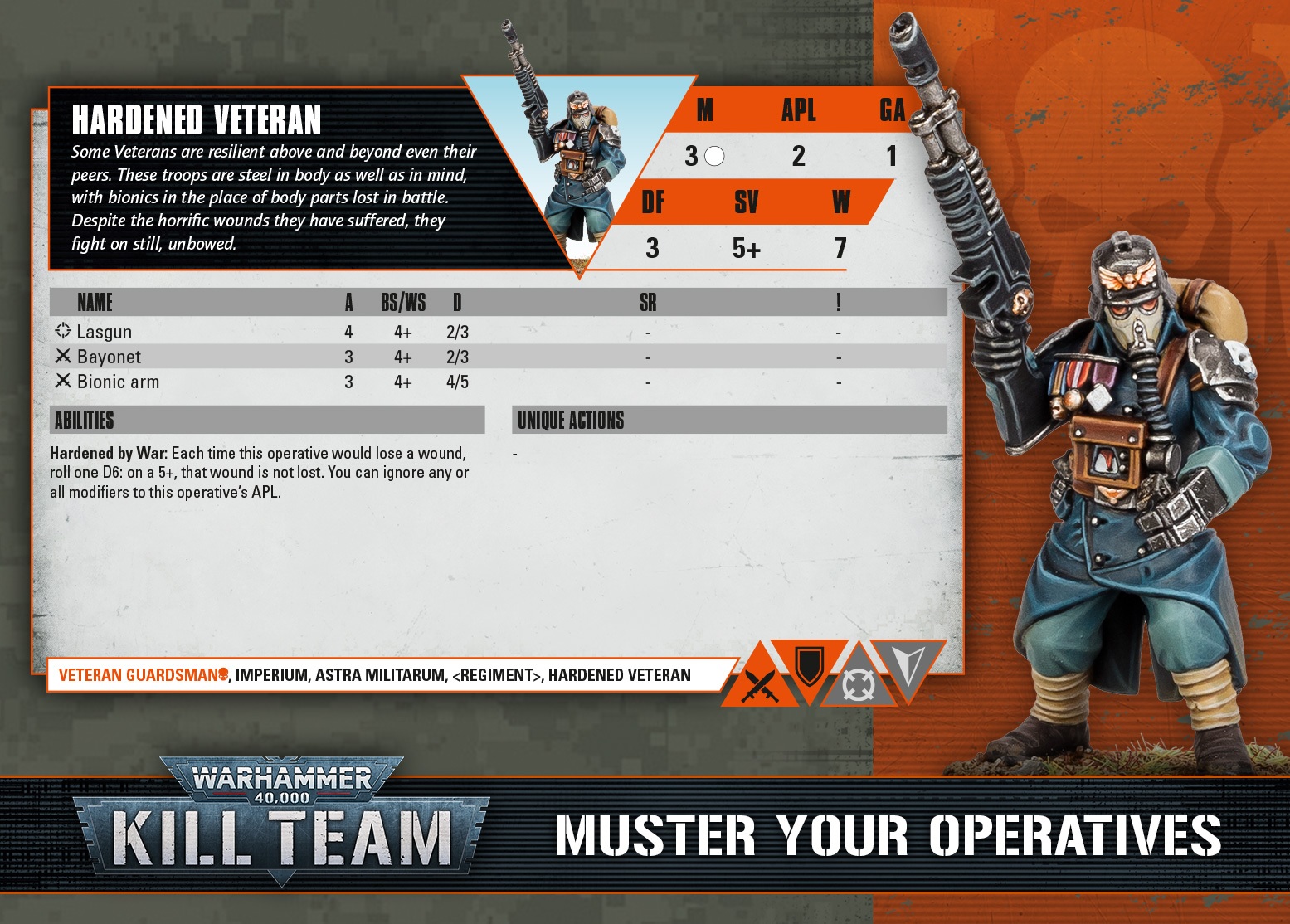 And finally we get another look at a Hardened Vet. This particular chap has a bionic army and it’s built for war. The damage of 4/5 is no joke and his Hardened by War ability allows him to get a “feel no pain” style save. It’s going to be good to have a few of these around to show the rest of the lads how it’s done!

Kill Team is coming soon from Games Workshop. Do you have a particular Operative you’re interested in seeing? 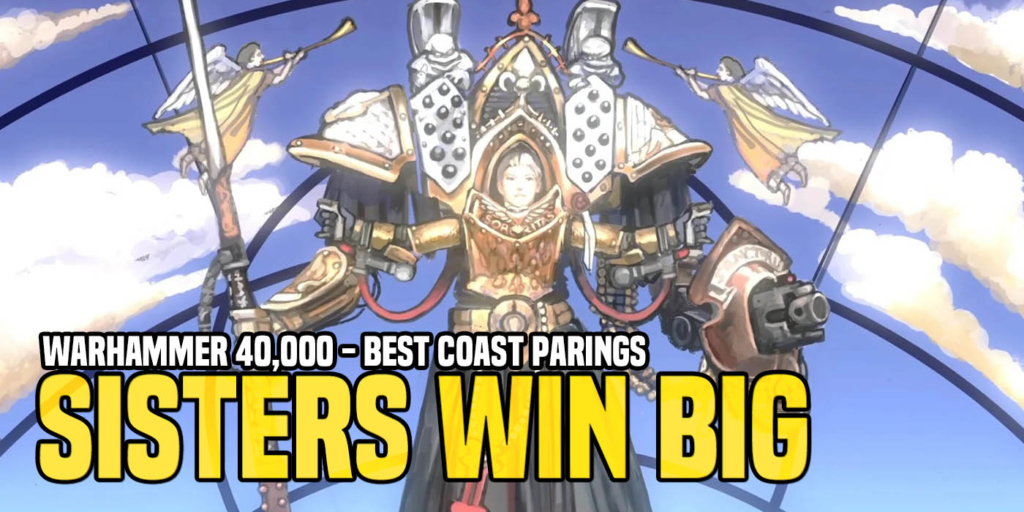