Warhammer: Age of Sigmar Terrain Kits Bring The Dawnbringer Crusade To Your Tabletop 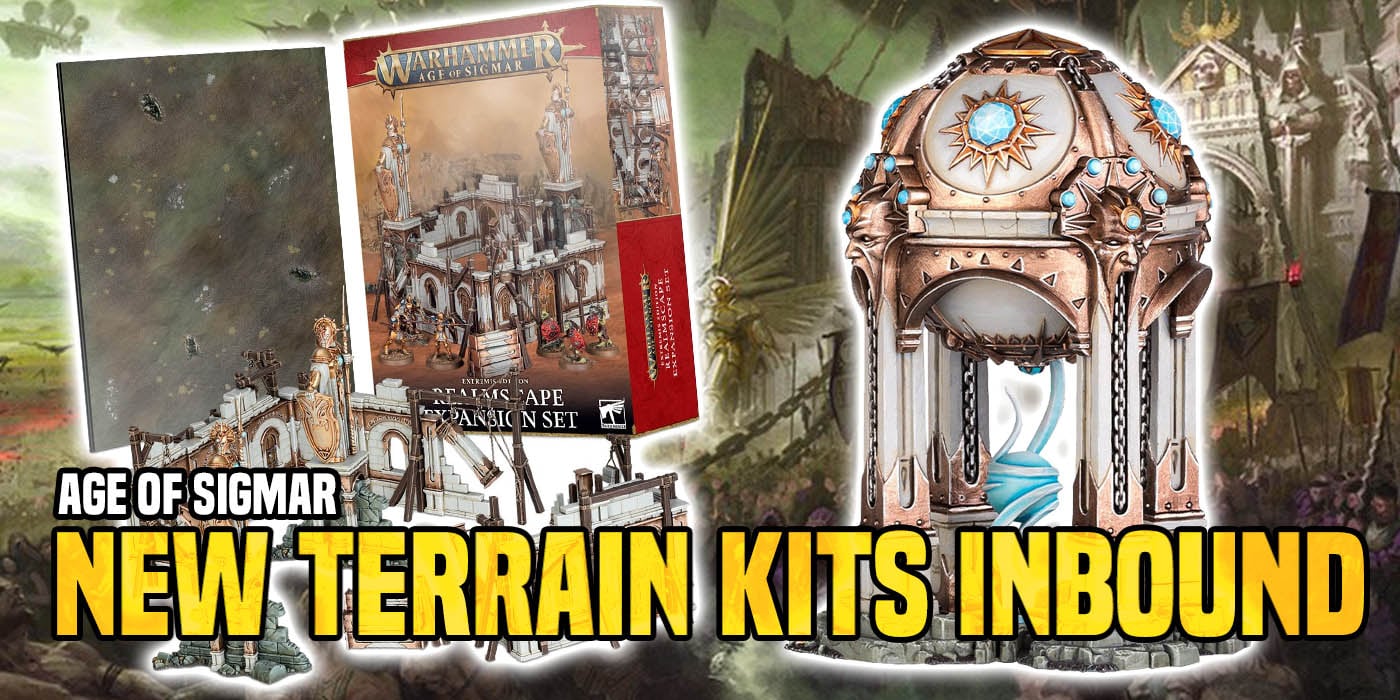 Games Workshop is releasing some new Dawnbringer Crusade Terrain kits to help spruce up your tabletop.

Having more scenery available to players is always a good thing. You never know what the community at large will do with cool terrain pieces when they get them. They could make awesome dioramas with them or they could slap them together as a quick and easy terrain feature for their next tabletop game. For most folks, it’s probably somewhere in the middle. The point is having cool terrain kits available to use is great – and these new kits are going to be very useful. 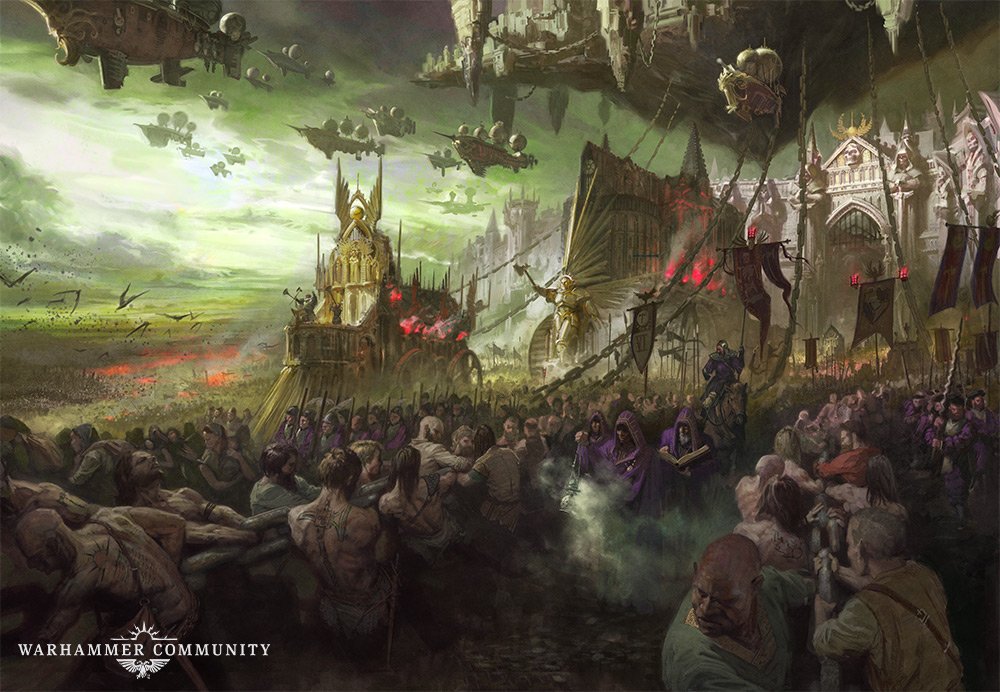 How difficult is it to get a house built in the Mortal Realms? It’s actually pretty challenging.

“It turns out you require a nexus syphon to shield your citizens’ souls, then you need some guardian idols for their protective magics. Finally, you have to build the house really fast because there might be an orruk warband over that hill coming to kick everything down. “

That’s part of the reason the Dawnbringer Crusades are a “thing” in the Mortal Realms. Successful or not, they do leave behind some great terrain features which you can add to your collection. The new kits offer a pretty cool mix of things so let’s take a closer look at a few and where you’ll be able to score these kits. 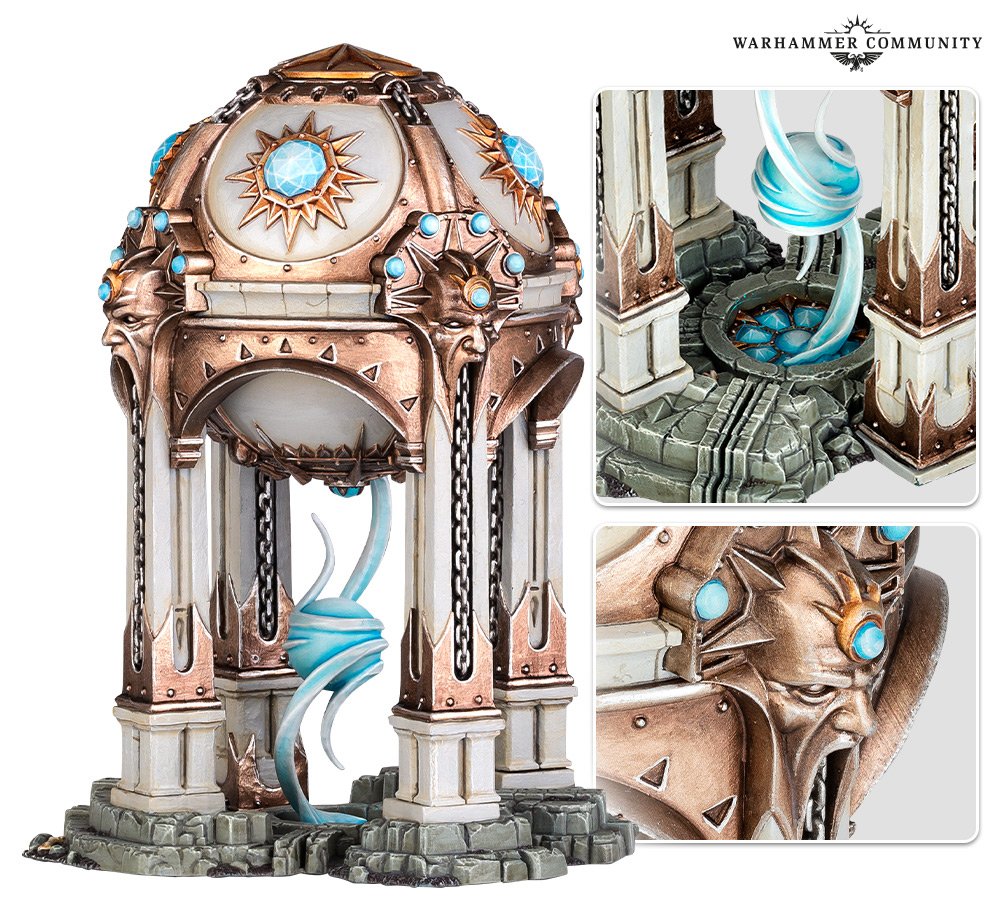 This is one of the nwe Nexus Syphons. It’s the cornerstone to a settlement and as it’s vital to the survival of your pioneers. We’re sure it’s going to have some cool rules but where can you get your hands on one? For now, these will be available in the upcoming Extremis Starter Sets (but we’re expecting to see this one available in other places eventually). 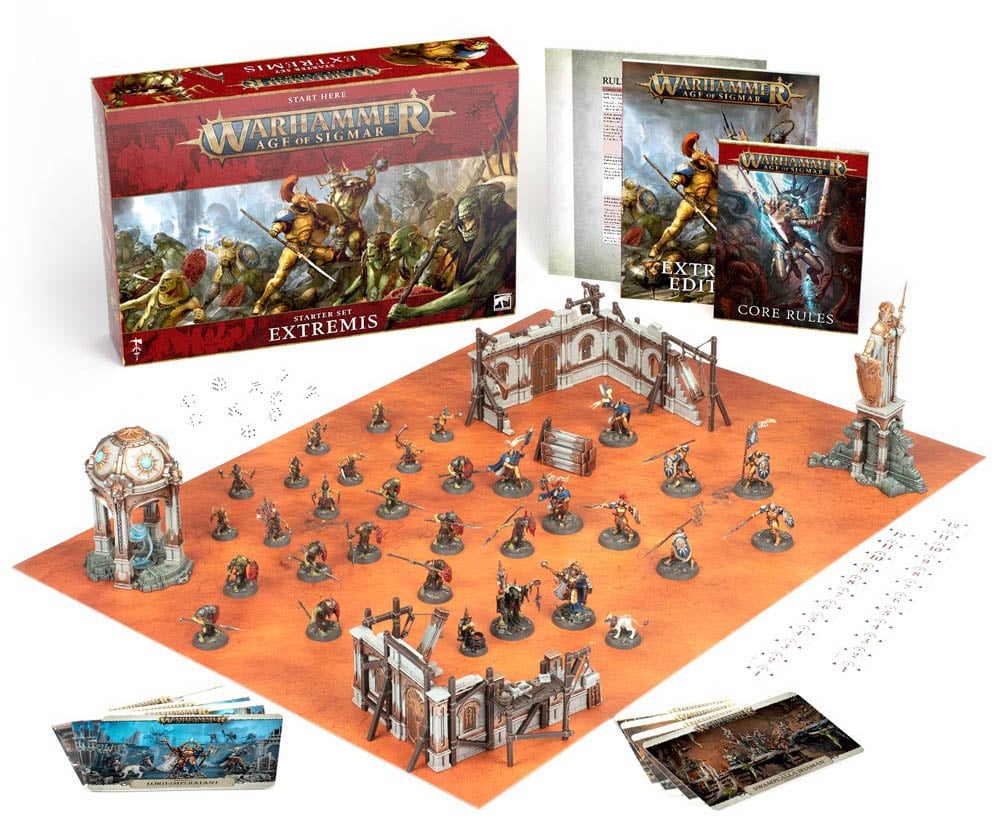 If you’re paying attention you probably also noticed that the Extremis set also has a few other items that are perfect for the tabletop terrain: 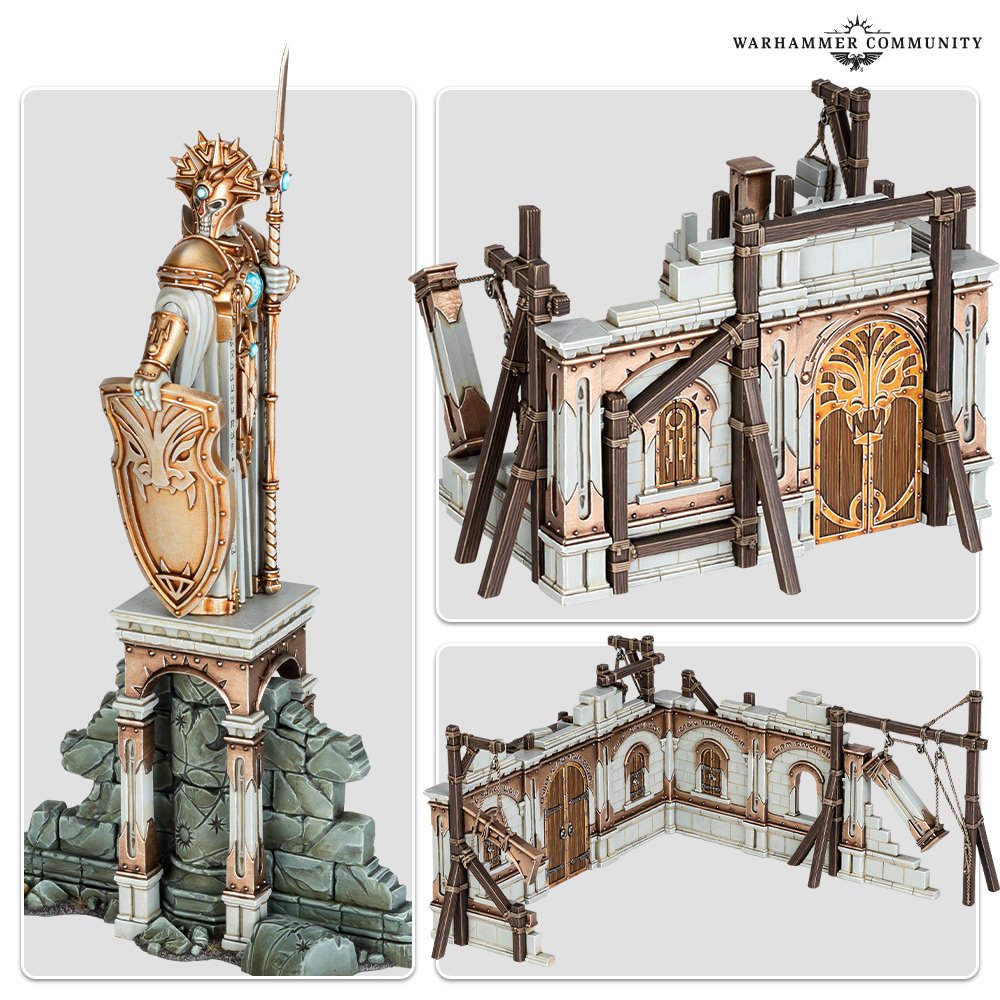 If you’re wondering what we’re looking at, it’s one of those Guardian Idols mentioned above and two domicile shells. It also come with extra pillars which are pretty darn useful. If you’re not looking to expand a Stormcast or Kruleboyz army, and you still want the terrain, your best bet is the upcoming “Extremis Edition” Realmscape Expansion Set: 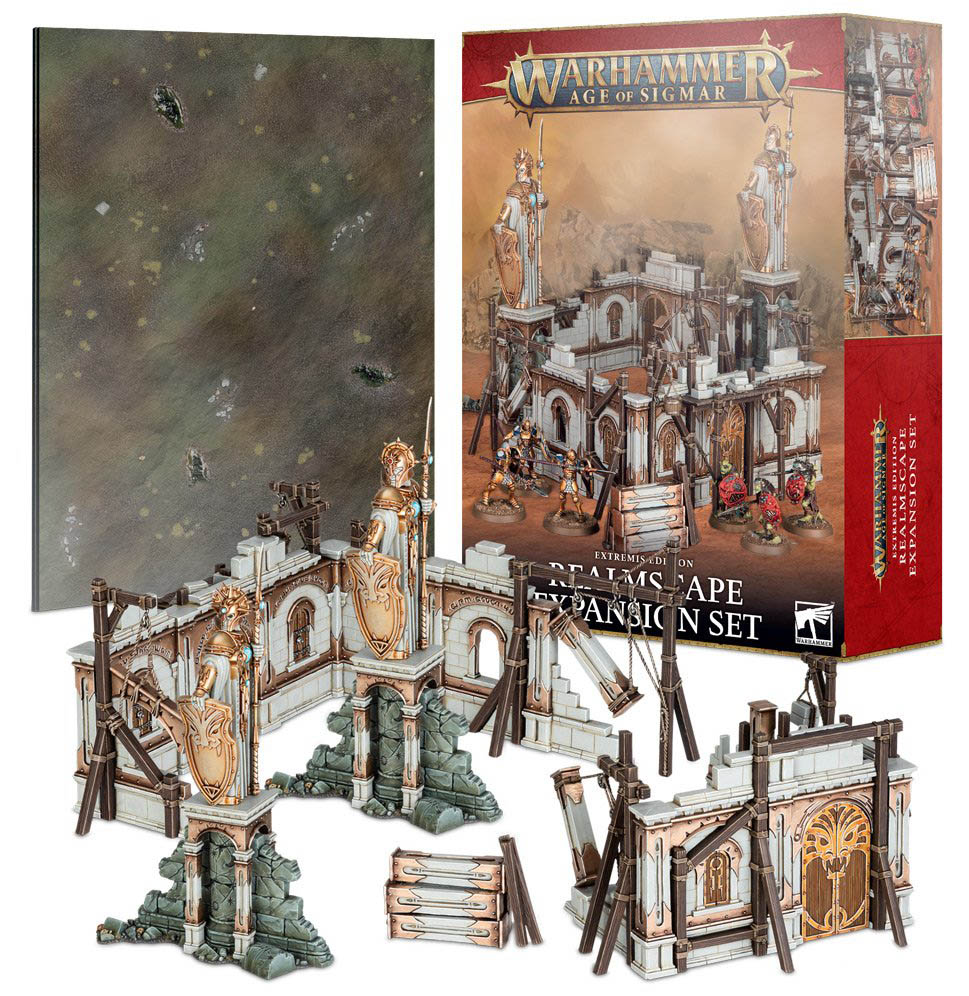 While it doesn’t have the super cool Nexus Syphon, it does have a lot of useful terrain. Also, it comes with one of the new sized gaming boards as well. Those boards are good as table toppers if you don’t have something a bit more fancy – plus they are the correct dimensions for the newer game sizes. If you’ve got your hands on a Dominion Launch box or if you’ve been eyeing any of the new starter boxes, one (or more) of these Realmscape Expansion Sets is a great addition to any collection.

Personally, I think the idea of creating a board full of these in development settlements is pretty cool. I really like those new Nexus Syphons as centerpieces as well. I also appreciate that these kits are pretty functional and playable. They are mostly line of sight blocking and are really just there to break up lanes and make the battlefield a bit more tactical without clogging things up.

What do you think of these new Terrain Kits?

Author: Adam Harrison
Writer, Editor, Texas Native, and Austinite for 15+ years, Adam covers all things Tabletop Gaming. Which includes Warhammer 40,000, Age of Sigmar, D&D, Board Games and everything else that involves dice, boards, cards and a table. A hobbyist, player, and collector of miniatures and games, Adam's current obsession are his Death Armies for Age of Sigmar, his Blood Angels and Tyranids for 40k, and his ever growing Arkham Horror: The Card Game Collection.
Advertisement
Age of Sigmar Games Workshop Miniatures Tabletop News Terrain
Advertisement

Daleks Are Invading Gallifrey in 'Doctor Who: Time of the Daleks' 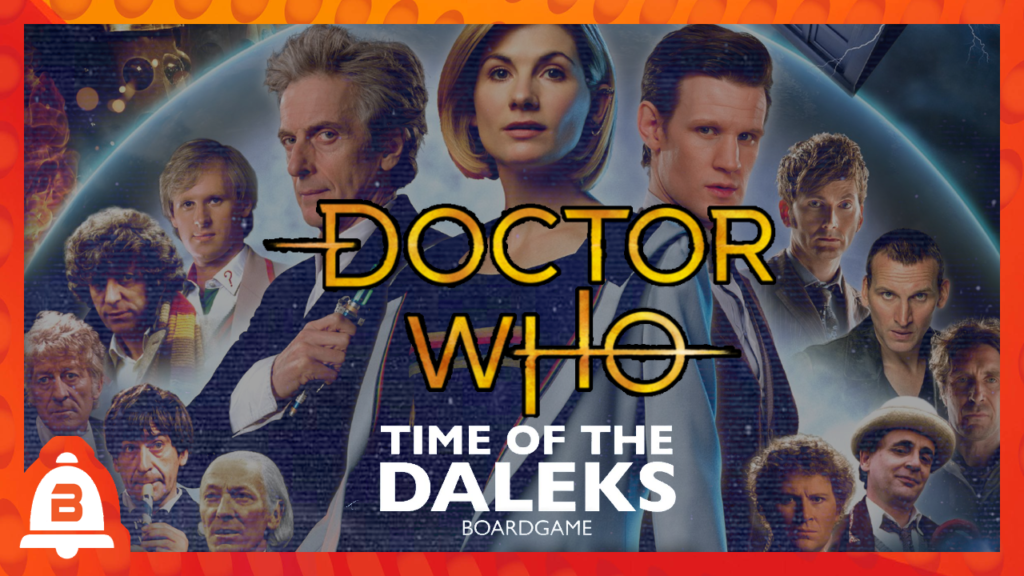