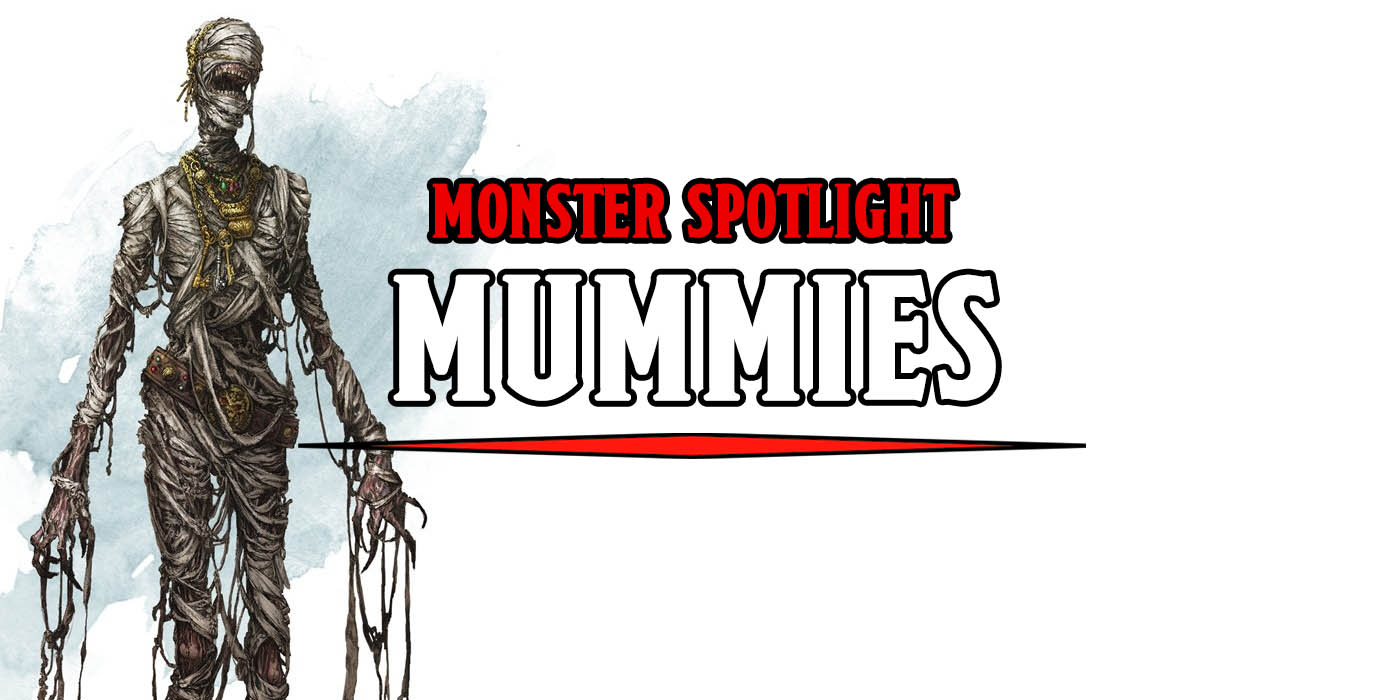 Mummies are classic horror movie monsters, and like any undead creature have almost endless potential for adding spookiness to a story or game. In our real world, mummies are incredibly interesting, and proof of the unappreciated genius of ancient civilizations.

Some mummies across the world date back thousands of years. But how do Mummies appear in Dungeons and Dragons and how dangerous are they to your party? Let’s find out.

Like most of D&D’s undead, Mummies harbor an undying hatred for anything living– and this hatred makes them strong. In addition to their relatively strong melee attack, a Mummy’s touch can infect a fatal, rotting illness on any foe they touch. Mummy’s touch can permanently reduces charisma and is immune to cure wound spells.

Only magic weapons will harm a Mummy, but holy water and fire will also do the trick. The raise dead spell will turn them into a normal 7th level human. Will they still be in a state of half decay? Let’s not think about it too hard.

2E mummies are “corpses native to dry desert areas,” so while Mummies in our world have existed all over the world, it’s safe to assume D&D Mummies are inspired mostly by the Egyptian variety.

Mummies cause terror and revulsion on sight. Which isn’t terribly surprising– being killed by a Mummy causes a character to rot immediately, and it can’t be undone unless ‘cure disease’ and ‘raise dead’ spells are both cast within six rounds. But if you want to bring a Zombie back from the dead, a ‘resurrection’ spell or a wish will do it. 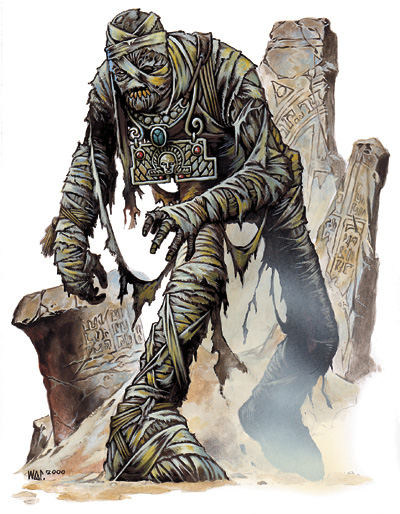 By and large, Mummies in third edition are very similar, if not the same, as second edition. But 3E also introduces the Mummy Lord. Exceptionally powerful or evil individuals who are preserved as mummies rise as Mummy Lords after death.

They more closely resemble who they were in life, often carrying their same tools or armor, and are often skilled spellcasters. Because causing rot and paralyzing fear isn’t enough, why not add spells? 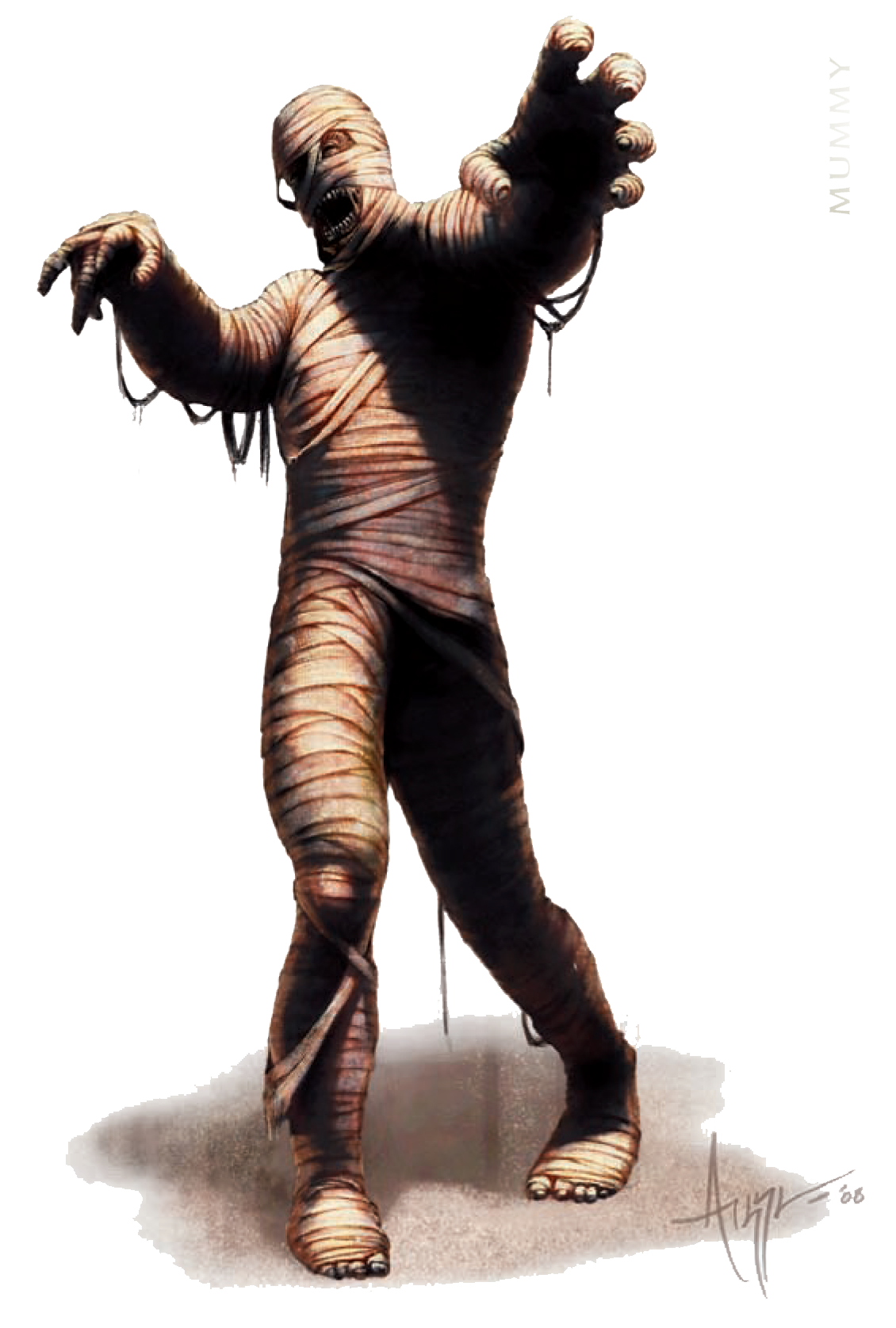 Since rot and melee strikes alone weren’t awful enough, 4E adds the “Rotting Slam” attack. A Mummy will usually target their enemies who are dealing fire or radiant damage, and use these attacks in an effort to get them out of the fight fastest. Also, there are now Giant Mummies in addition to normal Mummies and Mummy Lords, who can release a cloud of corrosive dust that deals acid damage. 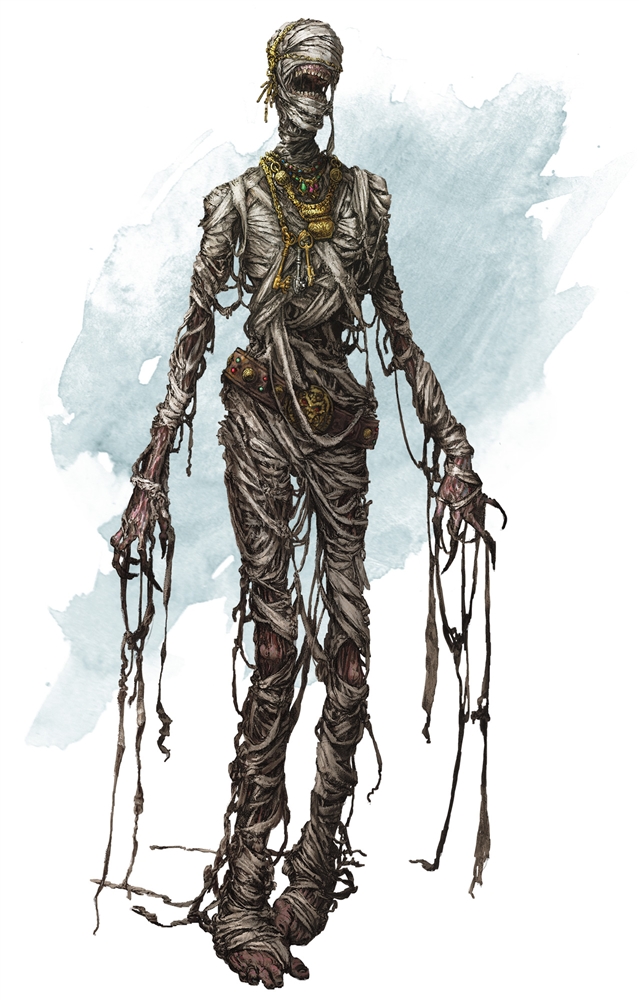 Lair actions and Regional effects make the 5E Mummy Lord just a little more fearsome than it already was. Each undead creature in the Mummy’s lair has the advantage of saving throws. Mummies can also pinpoint any living creature within 120 feet, while non-magical food and drink brought into the lair instantly evaporates or molds. And to add insult to injury, any treasure taken out of the lair is cursed.

Have you encountered a Mummy in your D&D adventures? How did that encounter go for your party? What is your favorite mummy movie or story?  Let us know in the comments!