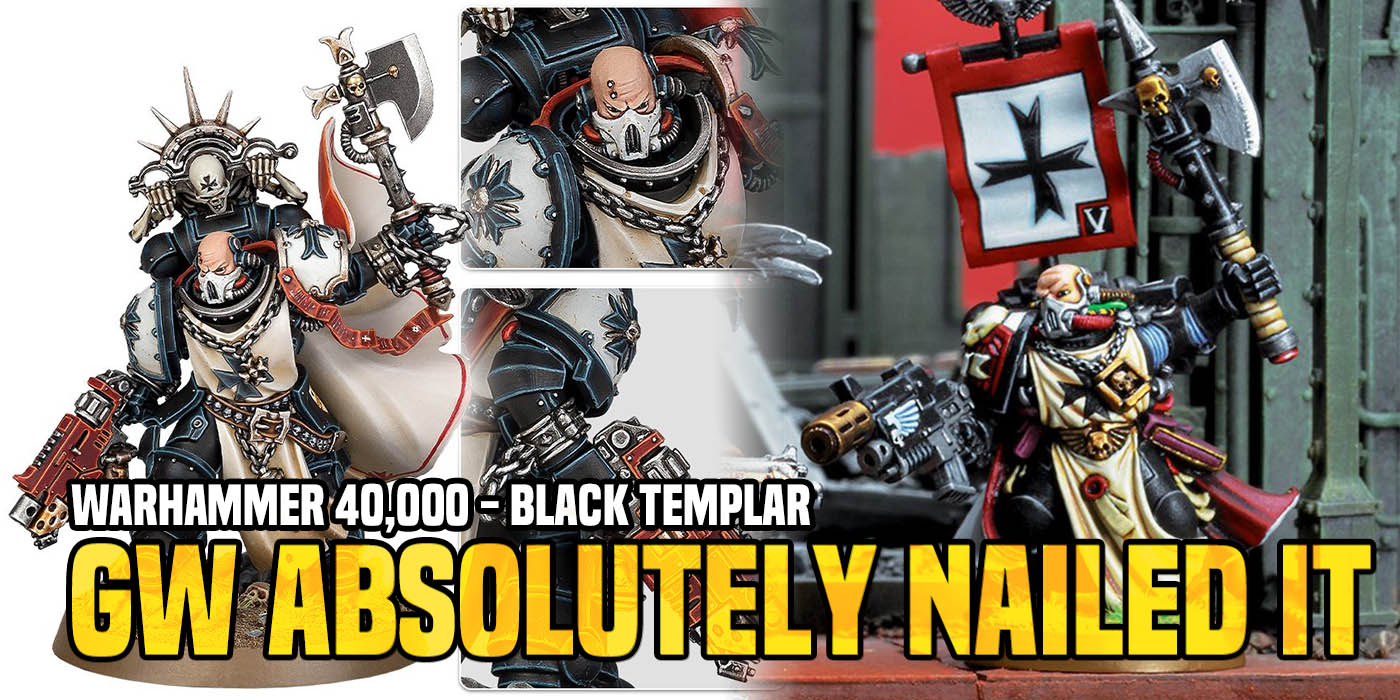 Black Templars were the a *thing* back in third edition. Their introduction as the posterboys for the boxed set plus the Codex: Armageddon book really made them a real army. From there, they grew and changed over the years. They got another update with a full codex in 4th edition – but that was really the last major book they had. They got random nods in other books and have had “playable” rules from supplements and other releases but they never really returned as a fully fleshed out army. Until now. 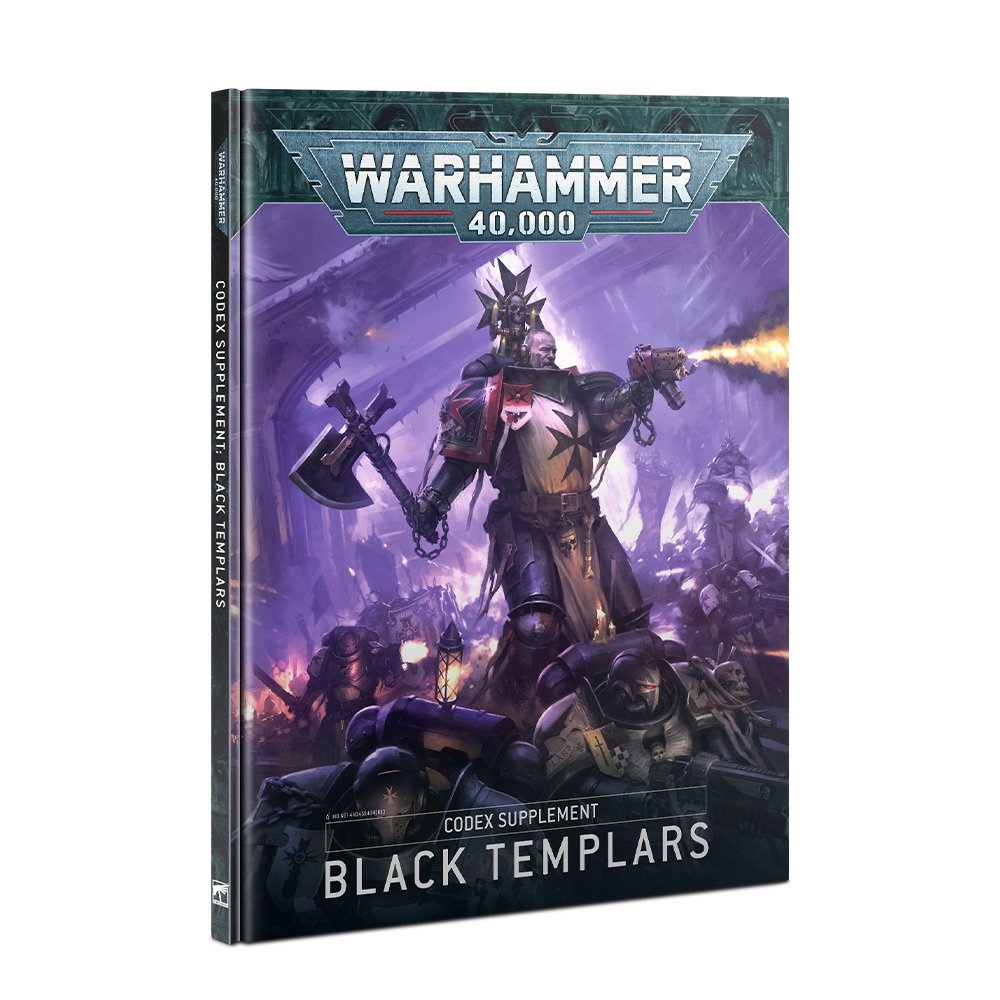 While the book is considered a Codex Supplement it’s the first dedicated Black Templar update in…years. Games Workshop seems like they knew this was a big one because they took the opportunity to update the models as well as the rules. And as a former Black Templar player I must stay they pretty much nailed everything with these new models.

The good news is that you won’t have to take our word for it – they are out in the wild and more Black Templars are on the way. GW has even commented on how the Design Team went into keeping these models true to their roots while updating them to modern standards. Here’s a few things that we think they got 100% right. 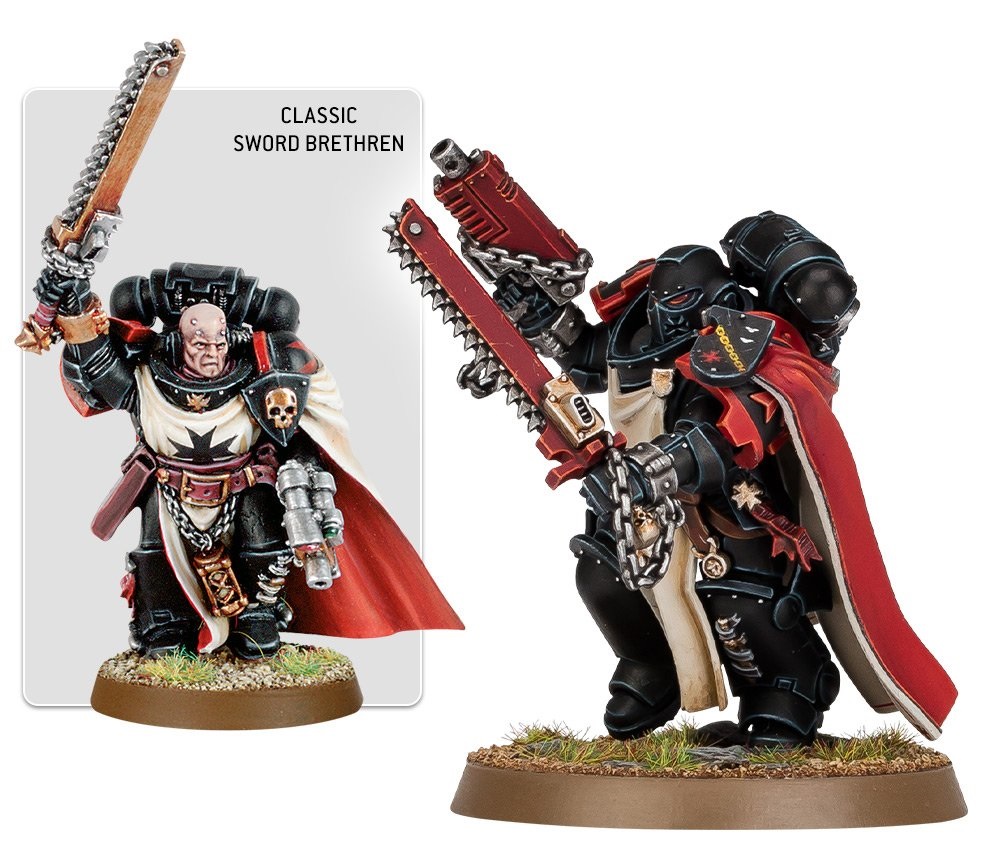 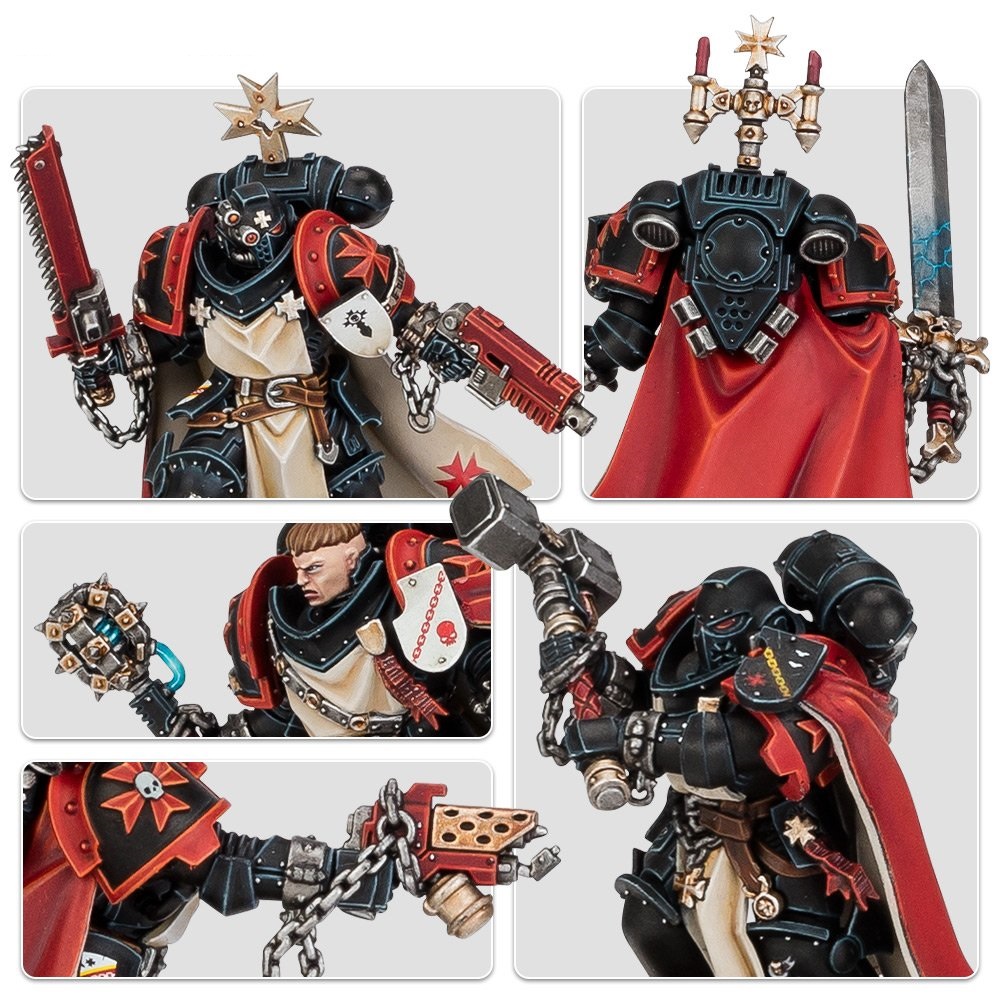 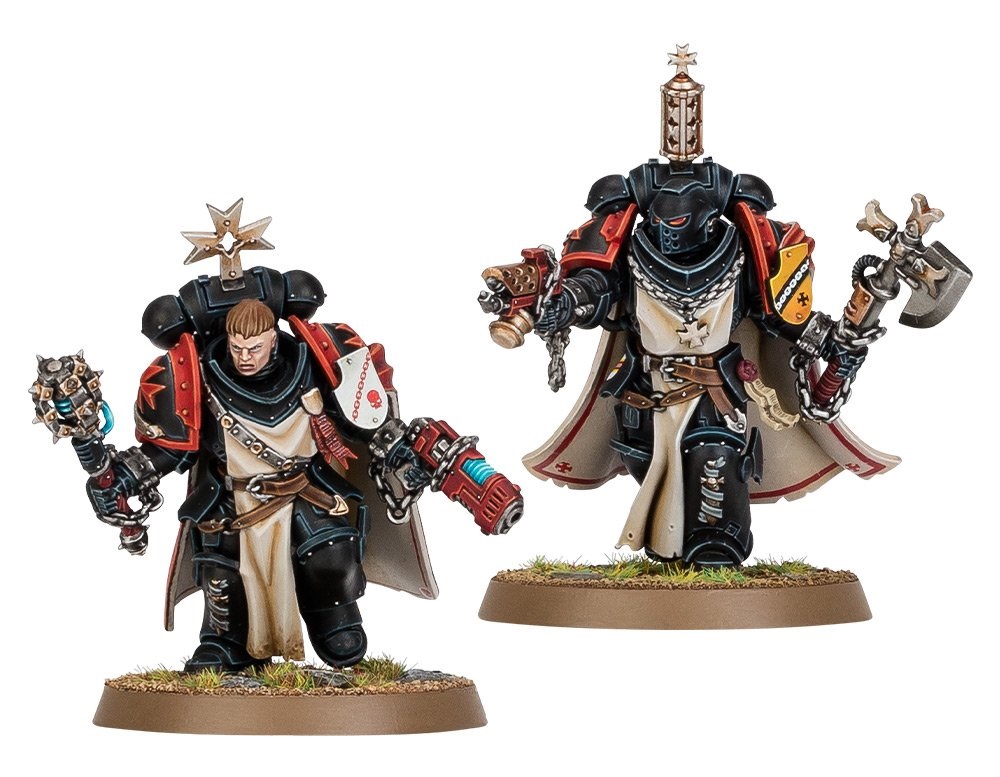 Paint jobs aside, these models fit the aesthetic of the Sword Brethren perfectly. The weapon options, the chains, the extra cloaks and tabards – everything just fits so well. They managed to Primaris-size the old models and make them both retro and new at the same time. 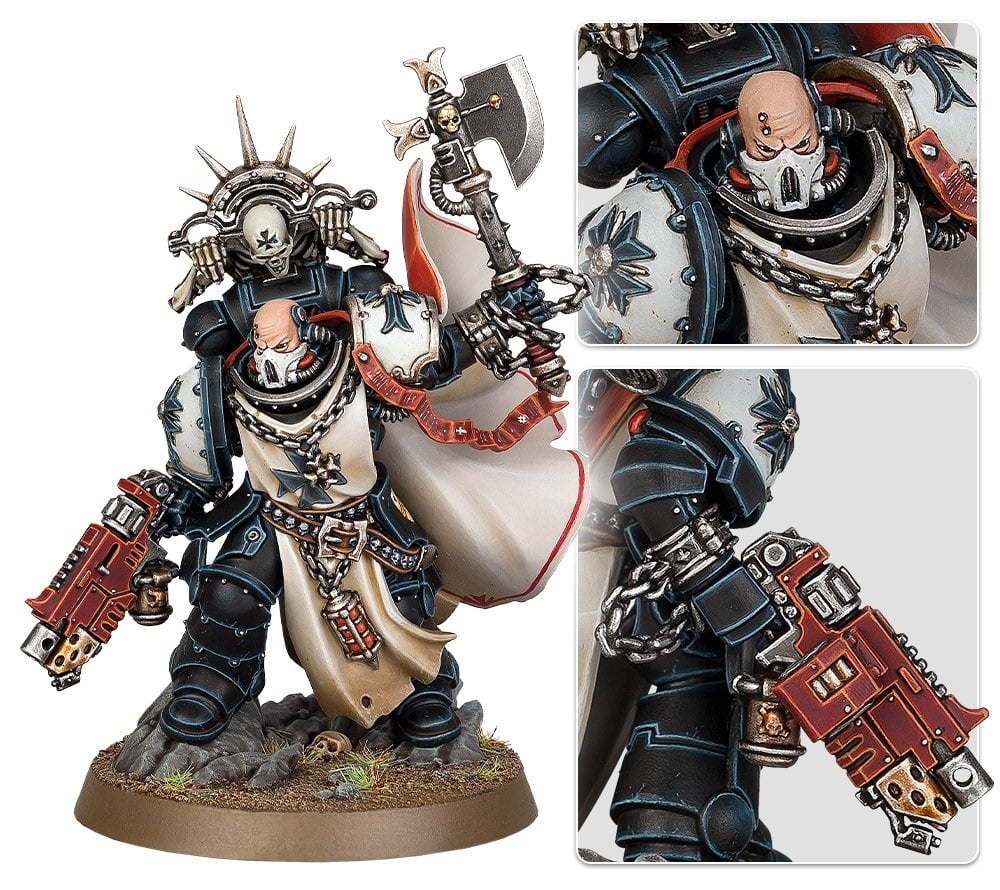 The Marshal is another example of this whole design philosophy of “make them retro, but new” – The team took the classic Black Templar Marshal and upscaled it to a Primaris while keeping a bunch of the details and respecting the one that came before it: 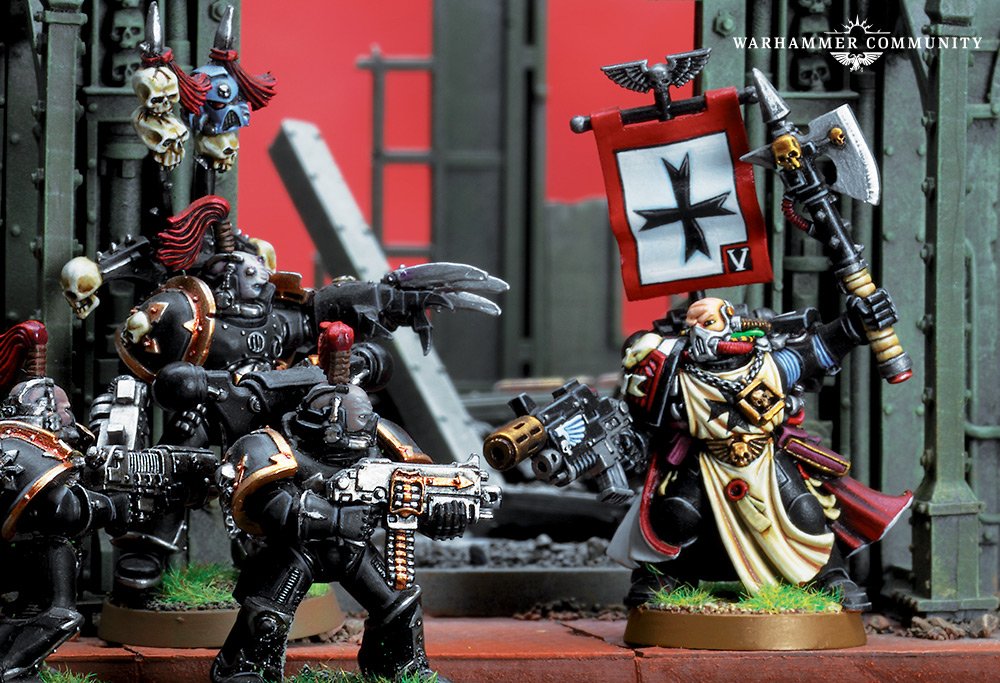 It’s great to see the details carry over like the rebreather, head, and axe. The new model has even more retro touches though – the extra rivets, chains, and skulls keep it in line with Black Templar motifs and turn that new Primaris Armor into something that looks older than it would be. Such a cool touch. 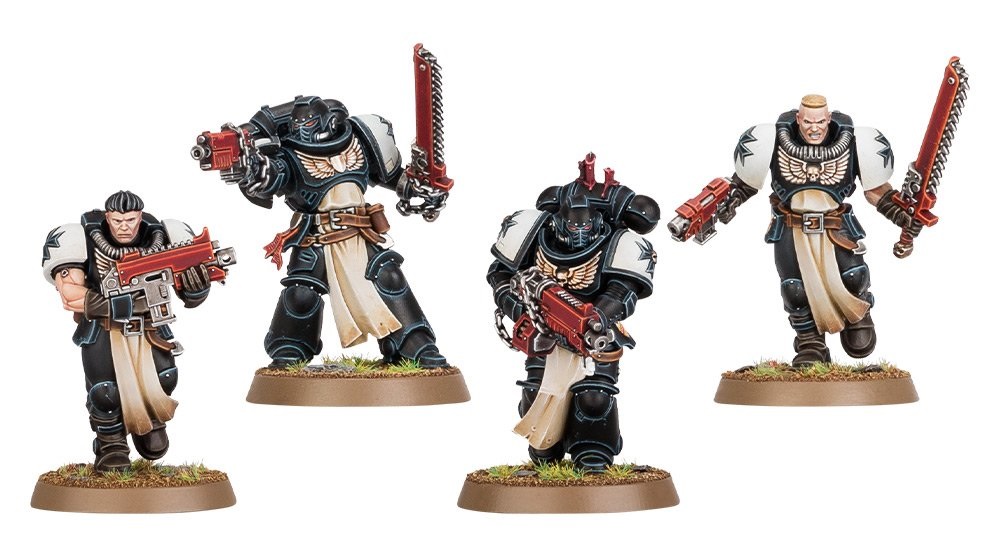 One of the subtle details I didn’t pick-up on until GW pointed out was the tabards. “Their tabards become more damaged as brothers move up the hierarchy” – and if you look closely, it’s true! The Neophytes tabards have some dirt/mud on them but the Initiates have small tears and holes in there tabards. And if you scroll up to look at the Marshal and the Sword Brethren you can see even more battle damage on their tabards. It’s a nice touch! 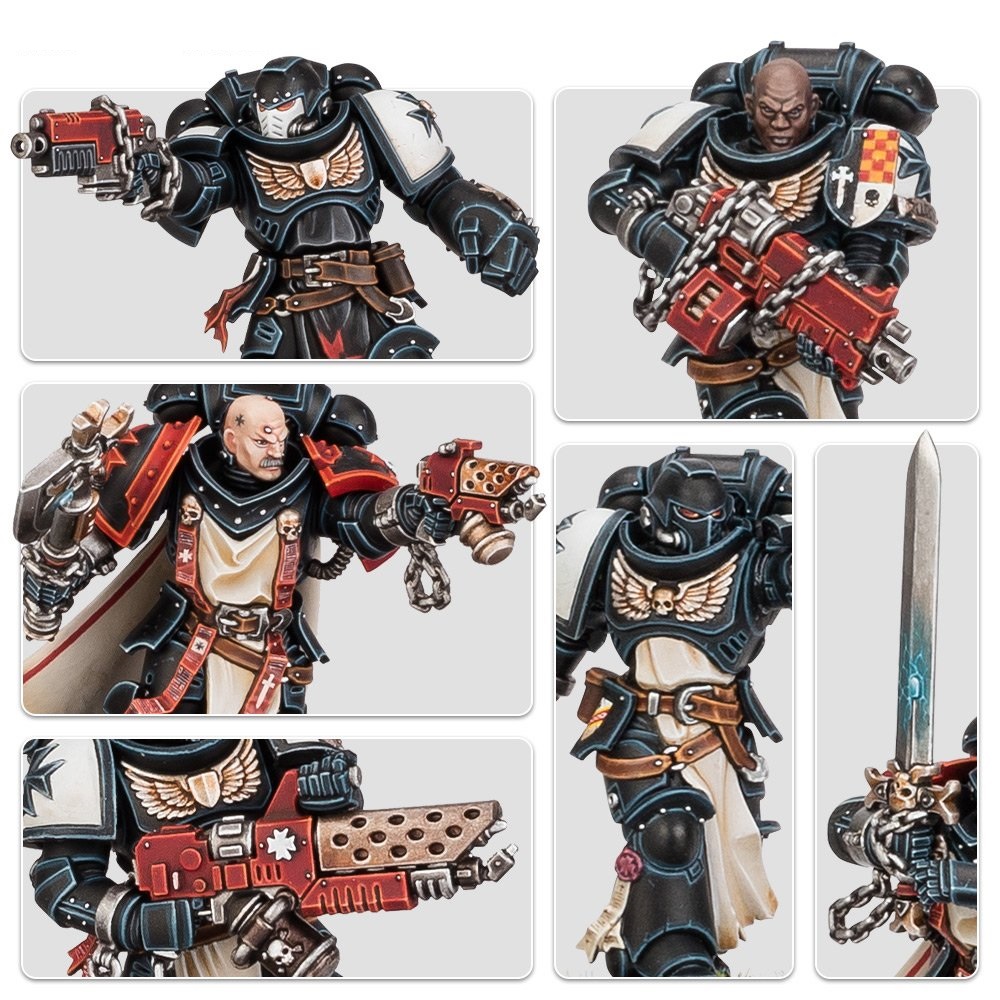 The Initiates also have a lot more rivets on their armor than your typical Intercessor Marines. While they are all wearing the newer Primaris Mk. X armor, these rivets make the Black Templar’s versions seem older or more used. Perhaps the rivets are there because of battlefield repairs. They are a fleet based chapter so they don’t always get resupplied as often as chapters with Homeworlds. The weapon options with the extra chains are just a nice Black Templar touch, too. 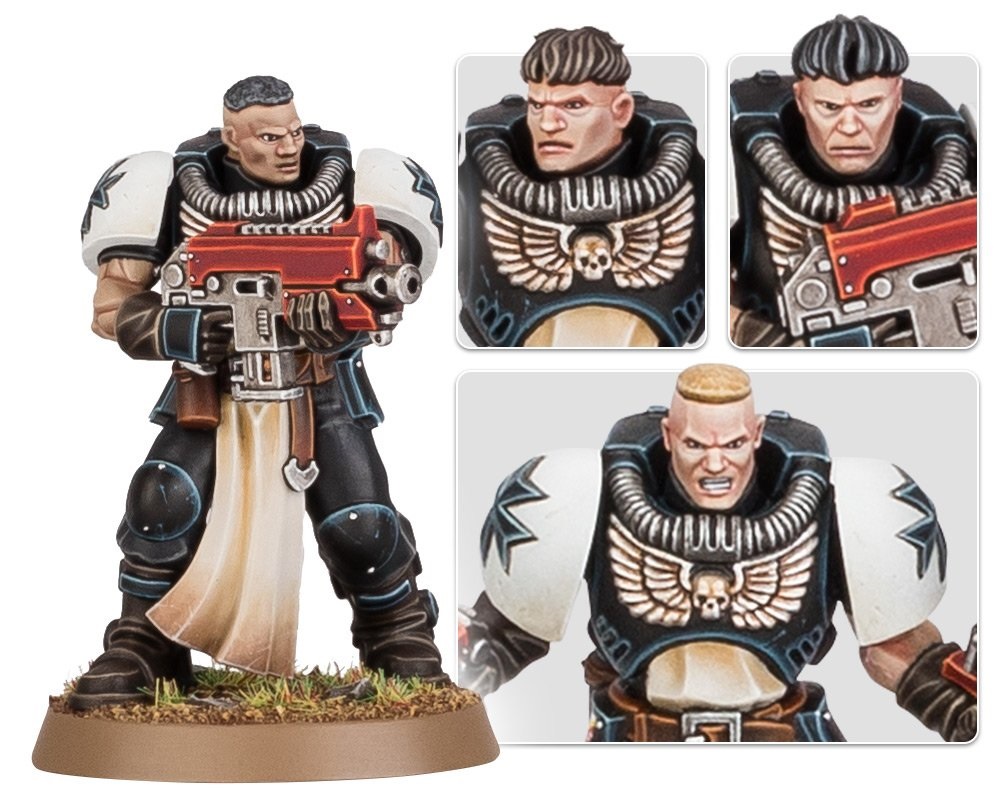 And the Neophytes…ahh, man. Look at those haircuts! Nothing says new recruit like a buzz cut or bowl cut. These models are no longer repainted Scouts – they are the first Black Templar Neophyte models and they look like Black Templars. I really want to see what GW does with these new Primaris Scouts as well. Will there be a future Primaris Scout Marine kit? Or will these remain as Black Templar Scouts? The tabards say BT only. 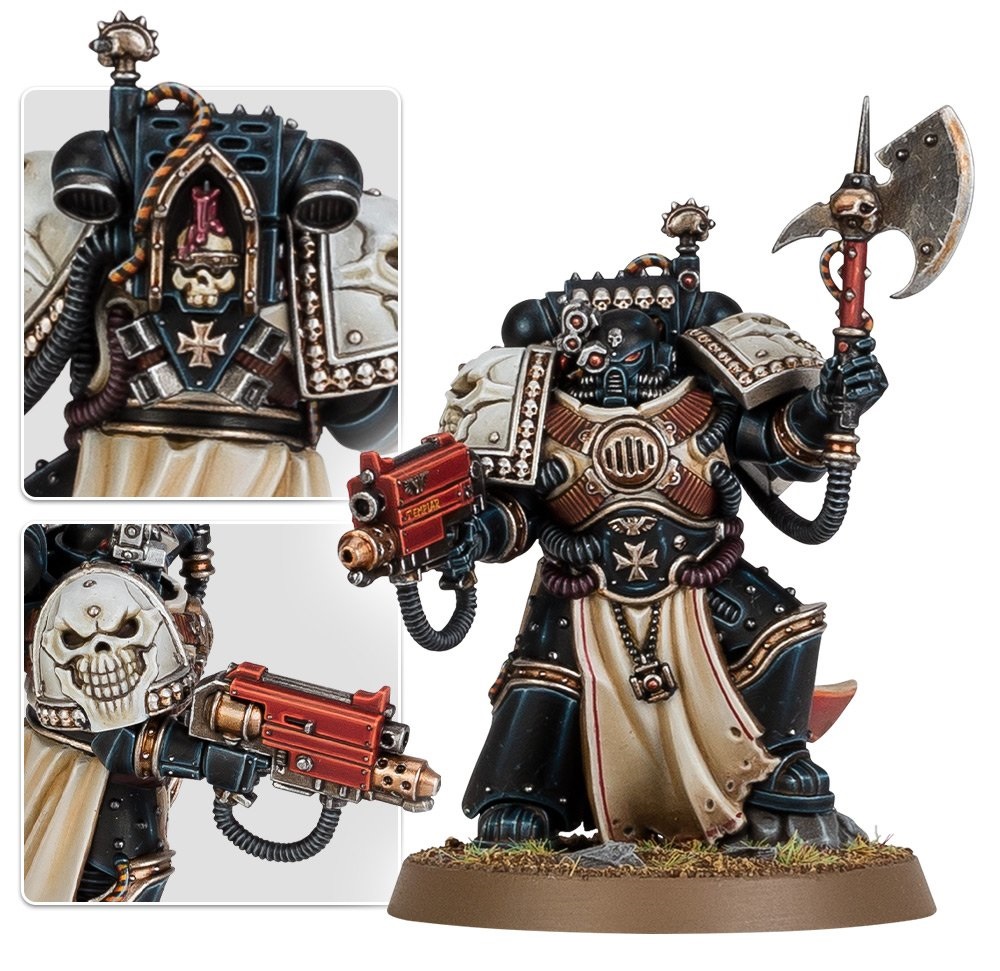 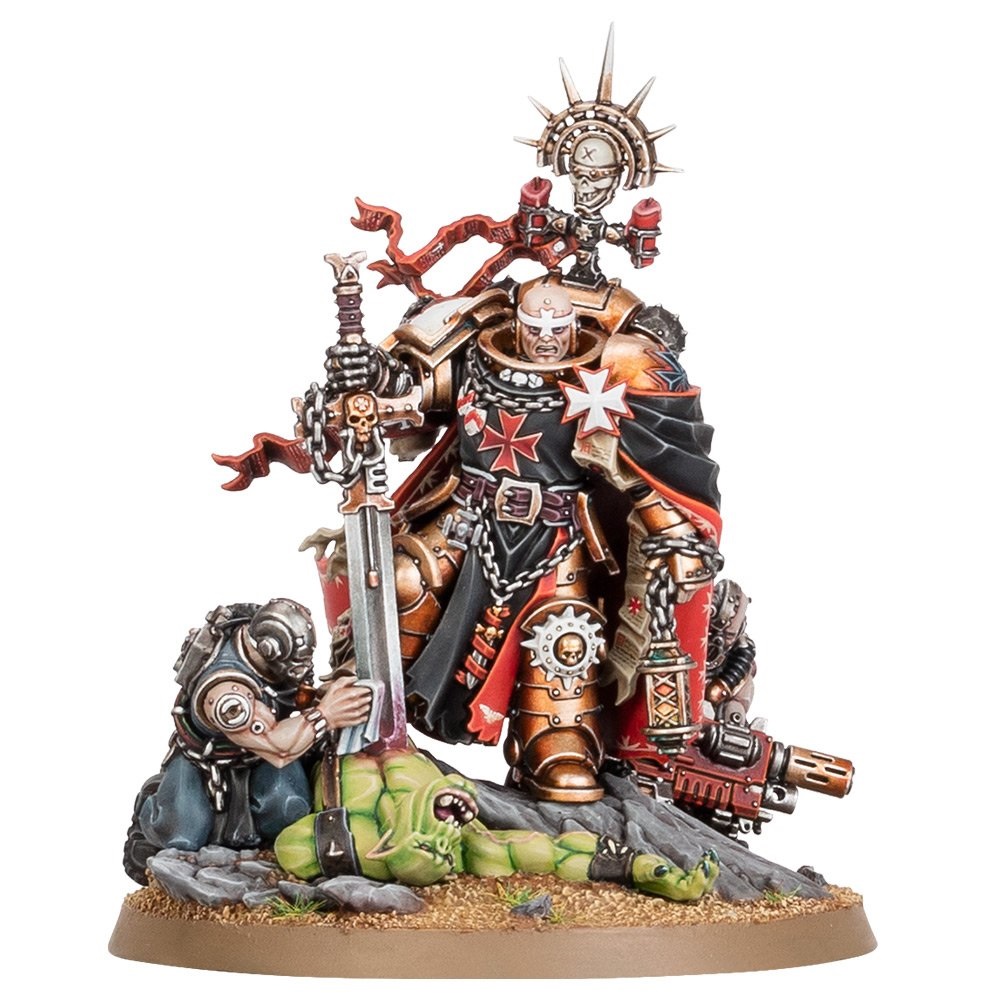 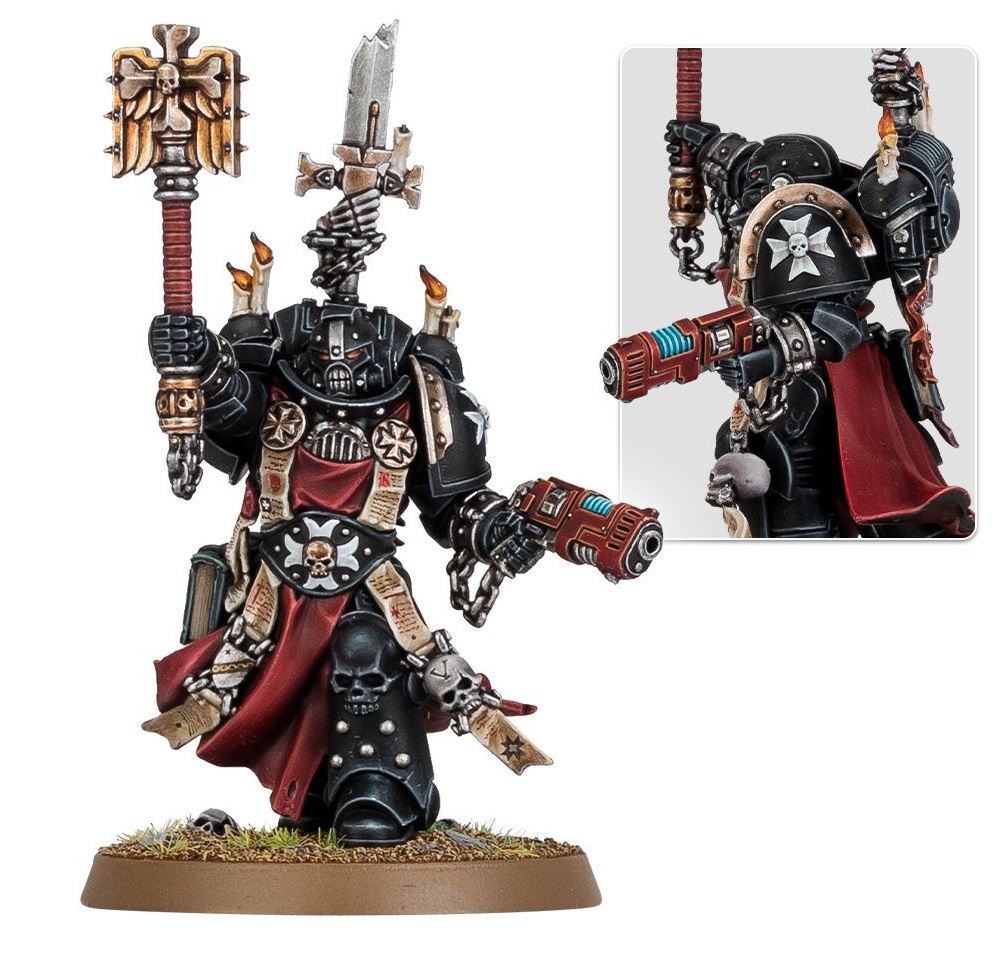 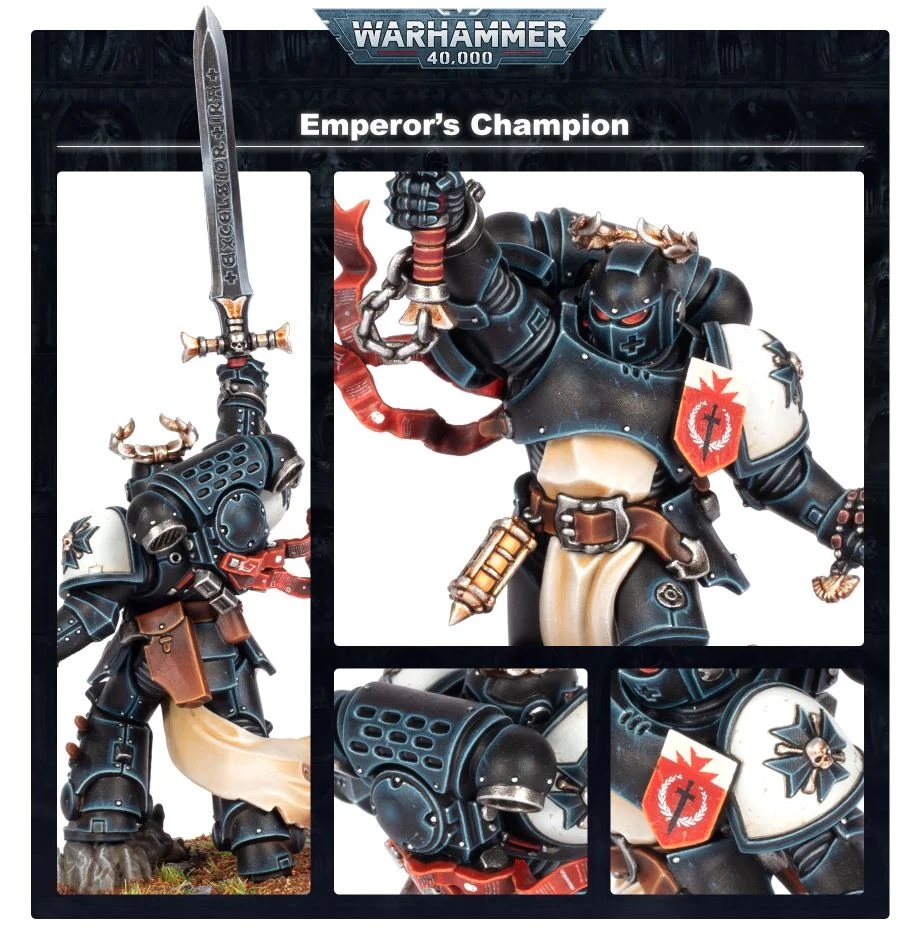 We could keep gushing – but I think the point has been made. GW did a great job of updating the Black Templar line from their roots to a more modern looking army. This follows in the same footsteps as the Necrons and Orks in terms of “Glow-ups” and it’s a welcome update. Let’s hope that GW does the same for the rest of the armies out there.

What do you think of the Black Templar’s new models?

Author: Adam Harrison
Writer, Editor, Texas Native, and Austinite for 15+ years, Adam covers all things Tabletop Gaming. Which includes Warhammer 40,000, Age of Sigmar, D&D, Board Games and everything else that involves dice, boards, cards and a table. A hobbyist, player, and collector of miniatures and games, Adam's current obsession are his Death Armies for Age of Sigmar, his Blood Angels and Tyranids for 40k, and his ever growing Arkham Horror: The Card Game Collection.
Advertisement
Black Templars Games Workshop Miniatures Warhammer 40k Warhammer 40K 9th Edition
Advertisement 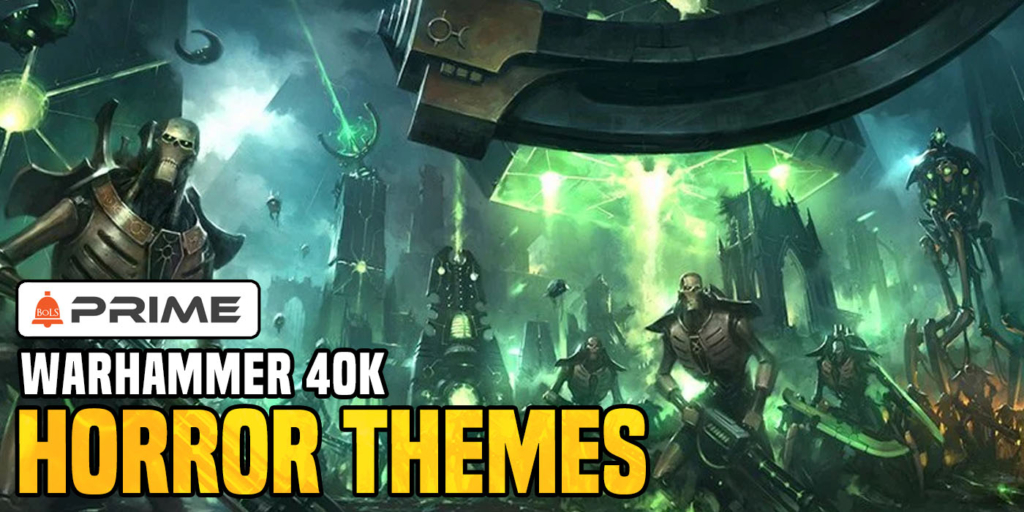