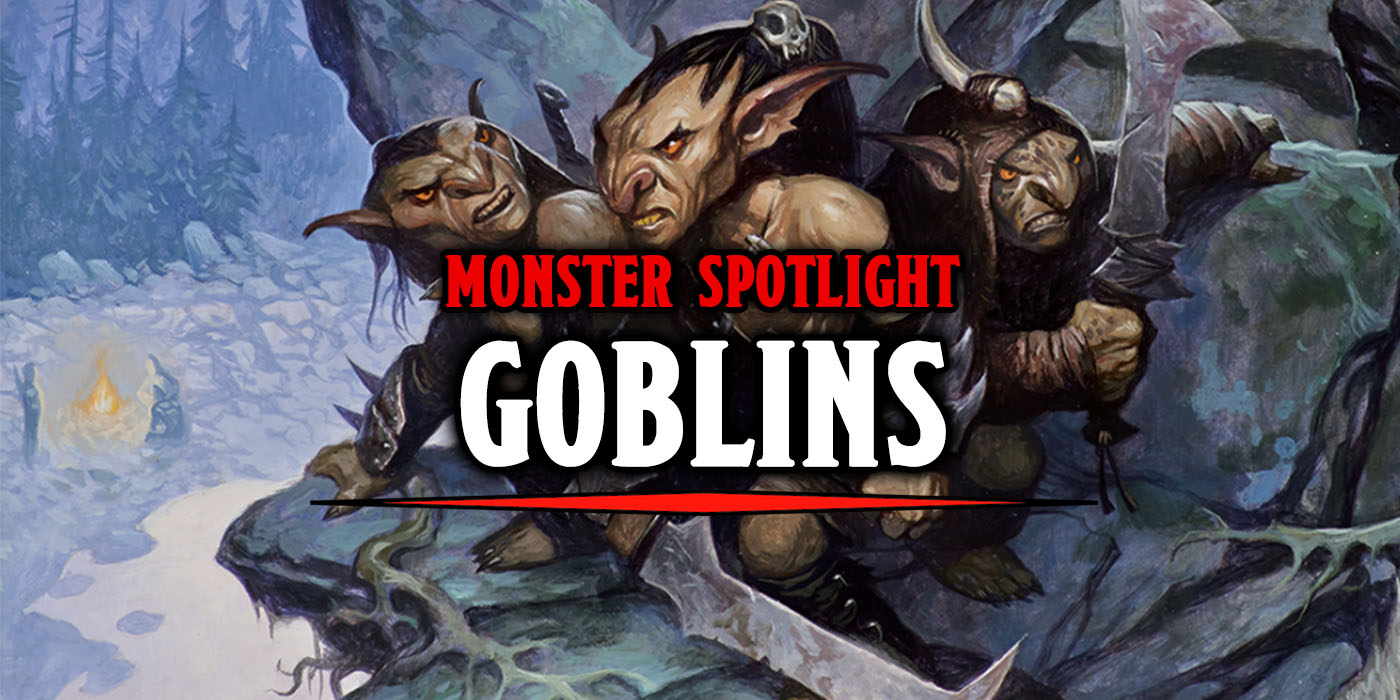 You’ve probably fought a D&D goblin or twenty. Their power comes in numbers, but how much power is that, really?

Goblins are an unavoidable truth when it comes to D&D. Maybe you’re starting off on your first adventure and getting ambushed. Or perhaps you’re hitting the highest levels, and your DM spent way too much time adding class levels on vengeful goblins from your first encounter. Either way, there will be goblins.

D&D goblins are almost universal cannon fodder in the game, used by stronger monsters as footsoldiers, bandits, or bait. But, these small yet mighty creatures have inspired the imagination– and been adopted by many a party.

Seriously, at least once a month someone comes around and asks what to do about this. Their party keeps adopting the goblins the party encounters instead of “killing them like a normal band of murderhobos.” Here’s a look at goblins throughout D&D. 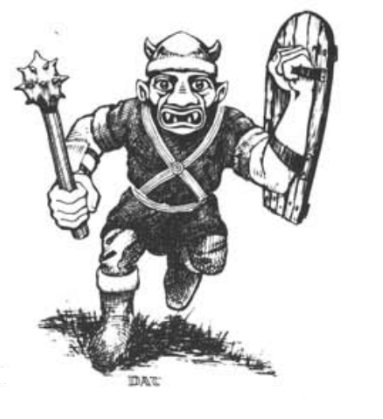 Goblins are the kind of monsters that really drive home how meaningless the frequency indicator in the monster manual is. They are uncommon, but appear in swarms of forty to four hundred. And come on, it’s goblins.

First-level modules start with goblin encounters. Nobody hasn’t had to fight a goblin. If adventuring required a Bachelors’s Degree, goblins would be part of at least three different 101 class syllabi.

D&D Goblins are very not uncommon. And with tribal societies, well-organized combat structures, and a twenty percent chance of also encountering a bugbear, they’re not exactly pushovers, either. 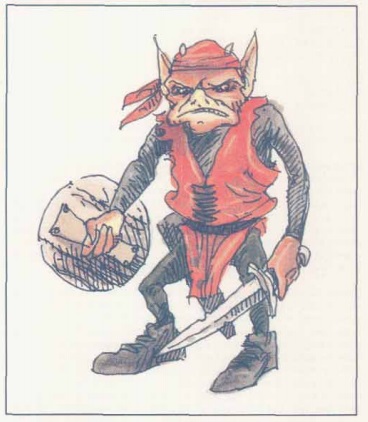 The second edition comes right out and says exactly what we were all thinking: goblins would be “merely pests if not for their great numbers.”

Like the compsognathus in Jurassic Park, one is puntable, but a swarm? That’s a problem. One ant in your house? Probably okay. An entire swarm? Ahh shoot, it’s time to call somebody.

Goblins are like itty bitty dinosaurs or bugs. They primarily live underground, and likely won’t try to take you on alone in face-to-face combat. And with almost no hit points, a medium to large adventurer could probably just step on one and call it a day. 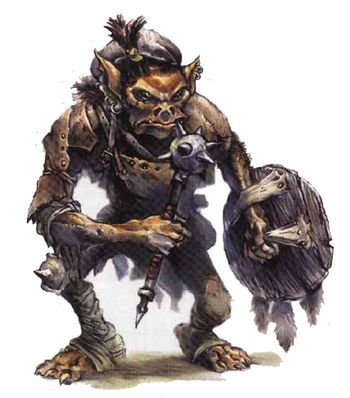 While on their own, goblins aren’t much of a threat. They’re the sort of monster that can easily be transformed into part of a more challenging, or at least more annoying, encounter.

With a +4 bonus to moving silently and a +6 bonus to riding checks for worg-mounted goblins, an entire hoard could become a serious problem. 3E D&D Goblins do, however, have a poor understanding of strategy. So don’t expect any of their attacks to be particularly well thought out when a straightforward approach is possible. 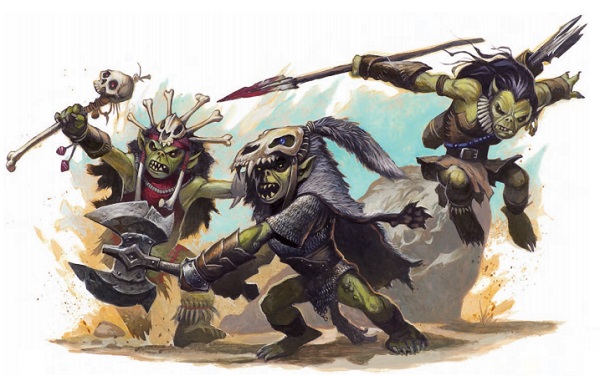 4E always makes things a little more complicated than they need to be, and goblins are no exception. There are seven varieties of goblin and hobgoblin each, and nine levels worth of encounter groups.

Goblins could now be skilled marksmonsters, magic-users, or bosses. This implies a more robust goblin understanding of military hierarchy and tactics. 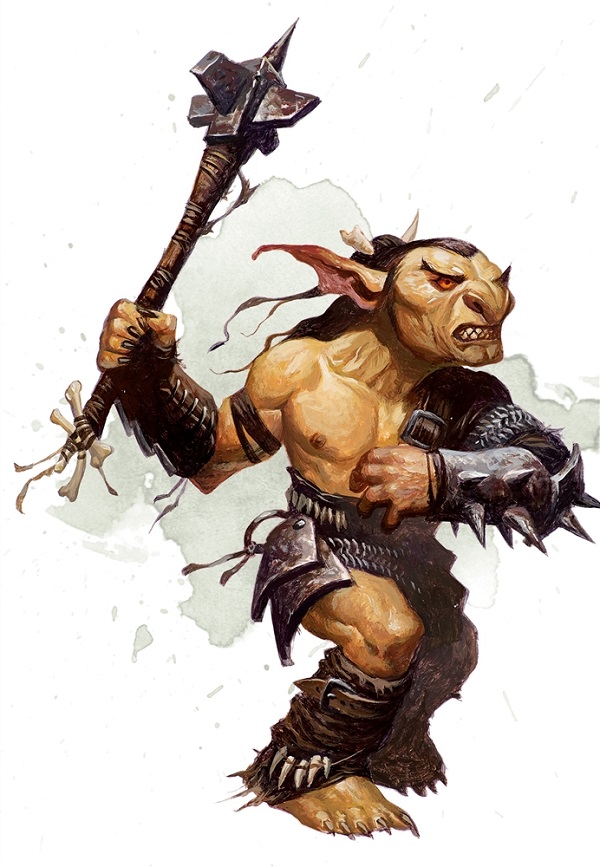 Both going back to basics and making goblin lore a little more fun, 5E’s version of these creatures only come in two varieties: goblin and boss goblin. Strongest goblin of the lair, and everybody else.

They are regularly ousted by their hobgoblin and bughear cousins, but goblin communities that are left to their own devices will also dethrone and replace their bosses regularly. Now, however, they have taken to befriended rats and wolves as pets and mounts respectively. A goblin alone may not be that scary, but a goblin riding a wolf?

What’s your favorite variety of goblin? Do you enjoy a good goblin encounter, or would you rather skip them and go right to fighting one of their cousins? Let us know in the comments!