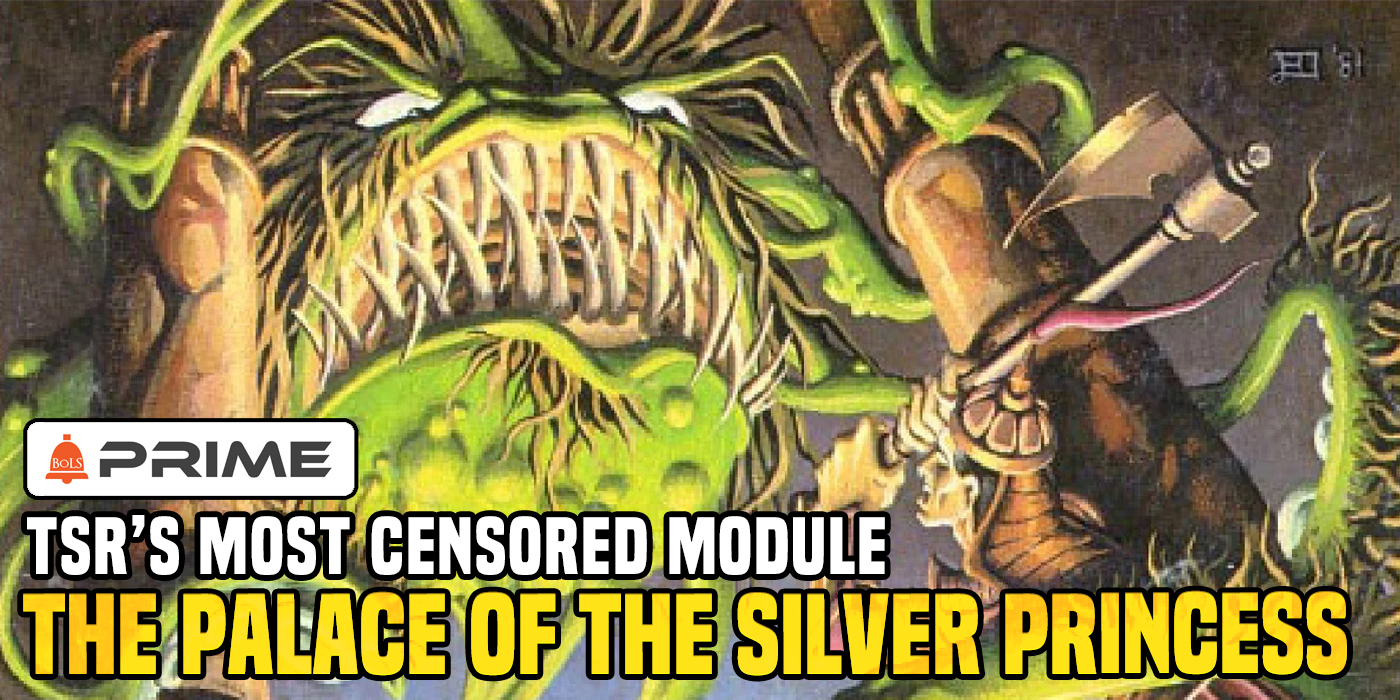 In the early days of TSR, before the Satanic Panic, one module proved to be infamous enough that it was recalled the same day it was released.

TSR is no stranger to controversy. Through the years it’s levied lawsuit after lawsuit, been sued by various members of its executive team, and even been the source of an actual boardroom coup.

And that’s without the drama brought on by the Satanic Panic, a moral panic that gripped the nation and earned D&D a spot on many a banned books list. But before any of that happened, TSR produced a module that was released and immediately withdrawn.

What did it do to earn that reputation? Well, let’s find out.

The Legacy of TSR’s Jean Wells

It all starts with Jean Wells, the first woman designer hired by TSR. She would go on to author exactly one D&D adventure, and one alone. It ends up being the most expensive D&D module of all time (more on that in just a moment).

But first, a bit of background on Wells. She was an avid and early D&D player. And was one of the driving members of the community facing team of TSR once she joined.

In an interview, Wells talks about her experience as one of the only women designers at the time:

He was hiring my imagination and would teach me the rest. I also suspect, but am not positive, that being a girl had a lot to do with it as well. When I finally moved up to Lake Geneva it was about the same time the company exploded onto the market. I am afraid Gary never found the time to assist me as he and I had wanted. It left me lost at times.

Fortunately I met Skip Williams. He was someone I understood and felt at ease with, still just not at ease enough to tell him my problem. No one at that time had that much of my trust. I don’t think my sex had anything to do with it being difficult for me. I lacked a proper mentor and that is what I believe made it difficult. I believe that lacking a mentor cast me into the role of token female. As for the atmosphere at TSR at the time it was crazy. Nothing was organized. We tended to do everything off the cuff seeing what worked and what didn’t.

Wells’ career at TSR touches on some of the crucial moments in the game’s development. Her first work was editing White Plume Mountain, considered one of the top ten D&D modules of all time.

In fact, Wells managed to touch on many of the enduring modules, contributing interior art for The Hidden Shrine of Tamoachan and editing Keep on the Borderlands. This would go on to be included in printings of the D&D Basic Set. 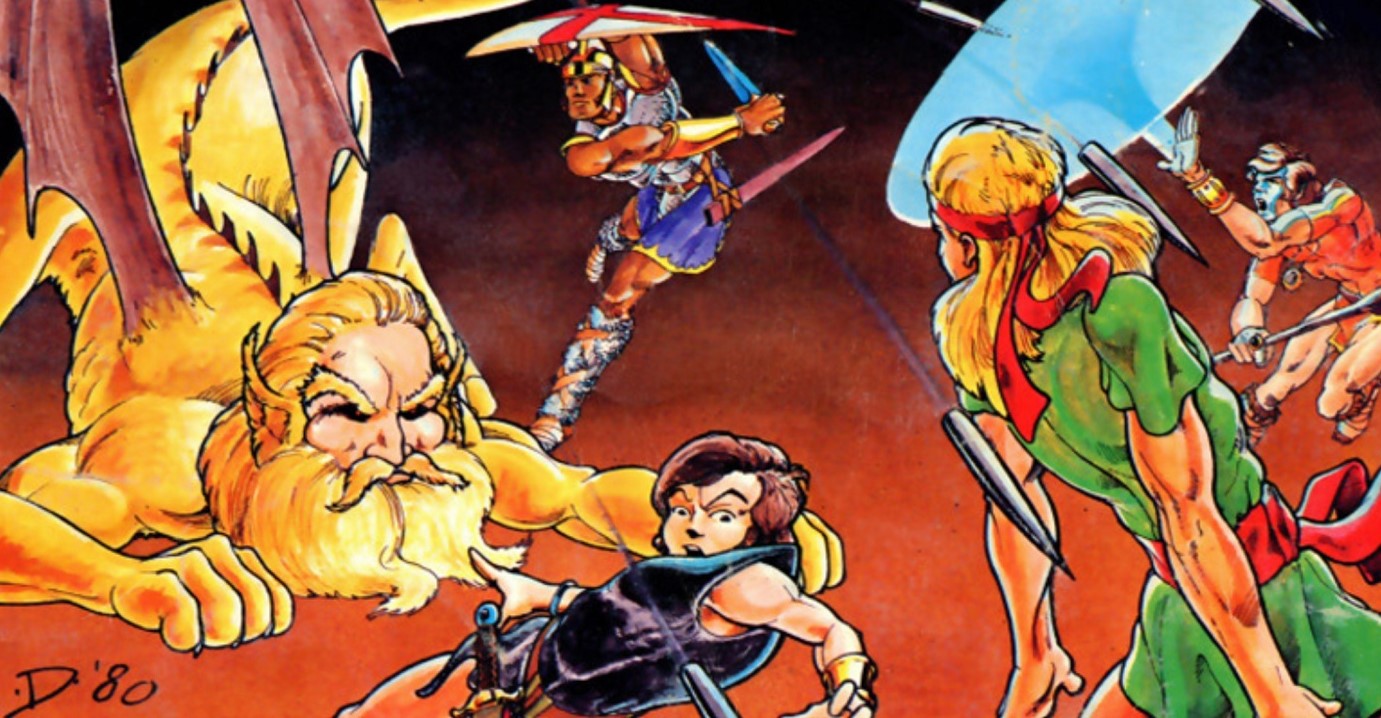 The Sage Advice column, which is still an ongoing part of D&D today began as a project by Jean Wells. She was the original Sage, and the enduring personality of the column began with Dragon #31 first published in 1979.

If you’re somehow not familiar with the column, this is an advice column where people could write in questions about D&D rules. Usually these were sent to TSR’s offices in Lake Geneva, but now they had a destination. 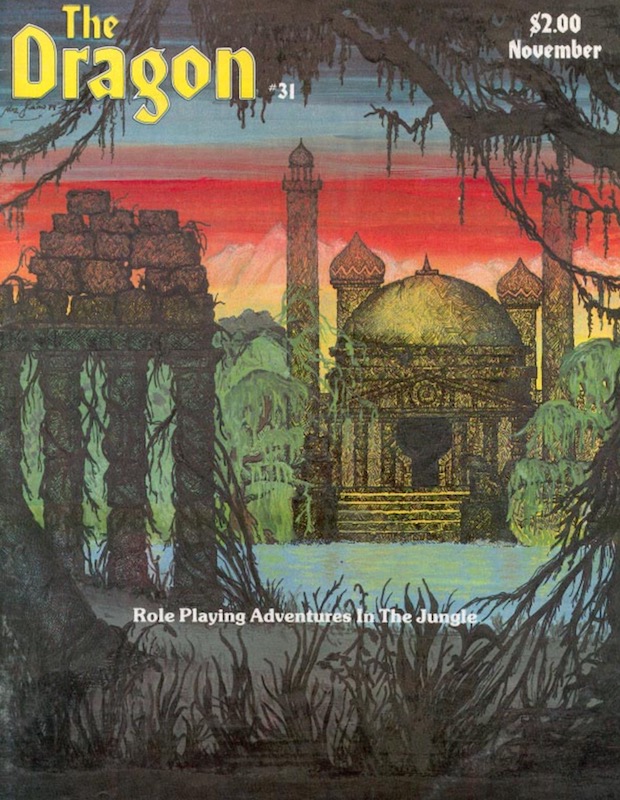 The Palace of the Silver Princess

So already, you can get a sense of Wells’ handiwork. She was something of a legend, and it stands to reason that the one and only adventure she would produce was too. Take a look at Module B3: Palace of the Silver Princess, the only adventure module ever to be recalled the very same day it was released. 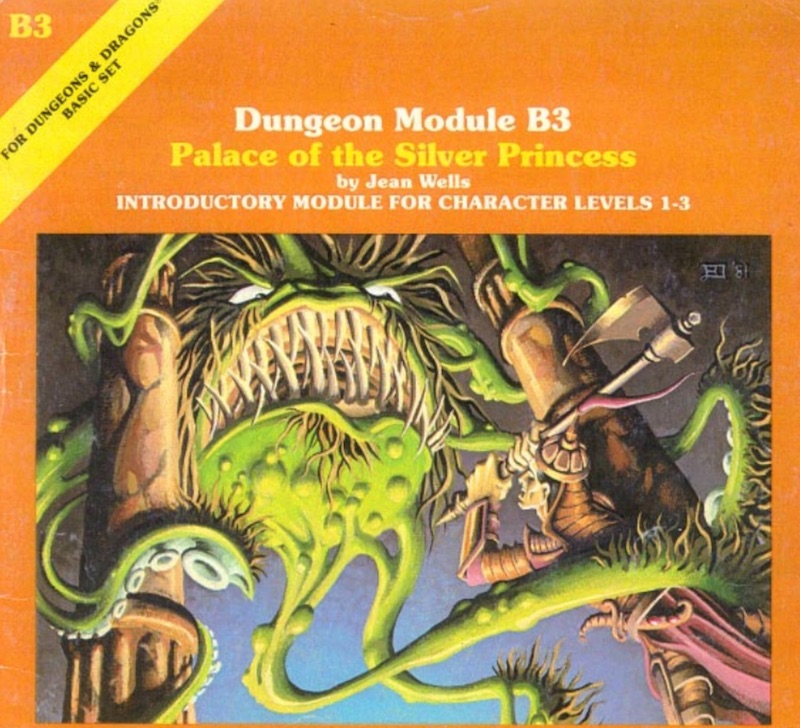 The same day this module was released, the executive staff ordered it destroyed, save for a legendary few that survived the cull. Palace of the Silver Princess was the first module designed by a woman.

But what made it to store shelves was a heavily modified version of what Wells had originally included. It was written by Tom Moldvay at the behest of the executive staff at the time.

Gary Gygax gave one side of the story in an interview:

You ask the man who decided on the ‘Amazon’ and ‘Temptress’ illos in original D&D, the ‘Eldritch Wizardry’ supplement cover about something in the artwork in Jean Well’s module being ‘objectionable’? I am quite at a loss as to how to respond.

Actually, it was Kevin Blume who literally pitched a fit about the product, demanded it be recalled. I had no input into the matter and I would have quashed his objection had I been able to do so. The fact is, though, that there were three persons on the Board of Directors of the company – Brian Blume, Kevin Blume and me. Similarly, while I was the President and CEO, Brian placed himself in charge of creative affairs, as President of that activity, while Kevin was President of all other operations. This effectively boxed me off into a powerless role. If a ‘President’ under me did something I didn’t like, my only recourse would be to take the matter to the Board of Directors where I would be outvoted two to one.

There are a lot of ribald details here, with a focus on the “objectionable content”. What was it? Artwork of a woman, chained upside down in torn clothing, being tormented by monsters who turned out to be an illusion:

I created the Decapuses to draw paladins into the room quickly without thinking and to be the first in. I wanted them to rescue the maiden who’s clothes were torn and seemed to be surrounded by nine ugly men taunting her. Ed thought it was a good idea and so did our boss Harold Johnson. It went through the channels with no problems at all until it had been printed.

Then all hell broke loose in upper management. The next thing Ed and I knew we were in trouble. Will Niebling was sitting in Dave Sutherland’s office mad as hell. Ed and I had no idea why. Will accused us of putting S&M into a child’s module. Neither Ed nor I even knew what that was. Will found it hard to believe, but it was true.Until this, upper management had no interest in a hands-on read before they modules to press.

But that’s a scenario that’s pretty much in any typical fantasy scenario, and you can find more risque work in a Vallejo painting. 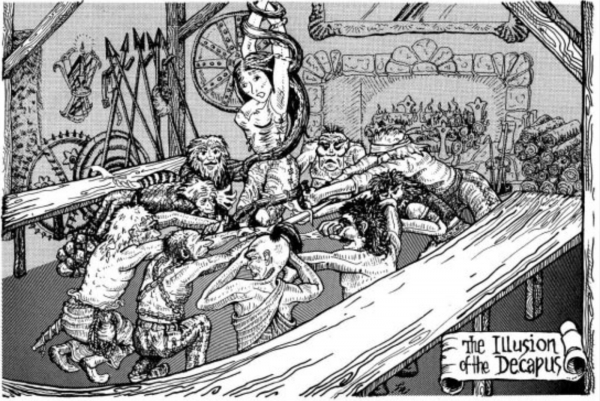 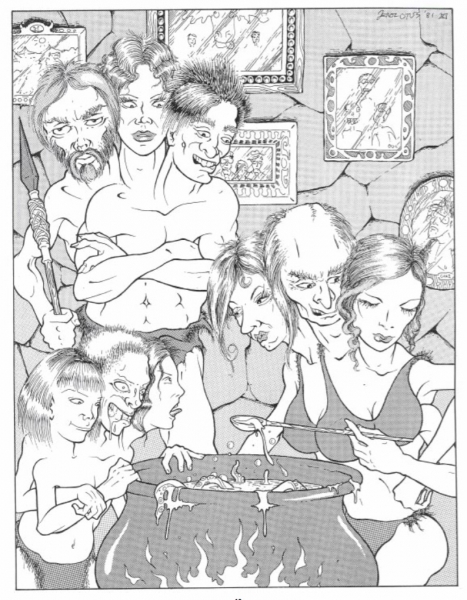 Whatever the case, upper management ordered the entire print run of the module destroyed, at a significant cost to TSR we might add. But it’s hard to keep anything completely destroyed, and copies have since made their way to the market. Some selling for upwards of $3000.

The original module was meant to be a teaching module, with Wells’ goals sounding awfully familiar…

The players could discover the part of the dungeon which had been caved in wasn’t any longer and the DM could expand it. I was assuming that they were trying to learn to set up their own world and I was trying to help

Sadly, few players would ever get to experience this module the way it was intended. If you are lucky though, you might find one and play one for yourself to see what’s so controversial about this module. 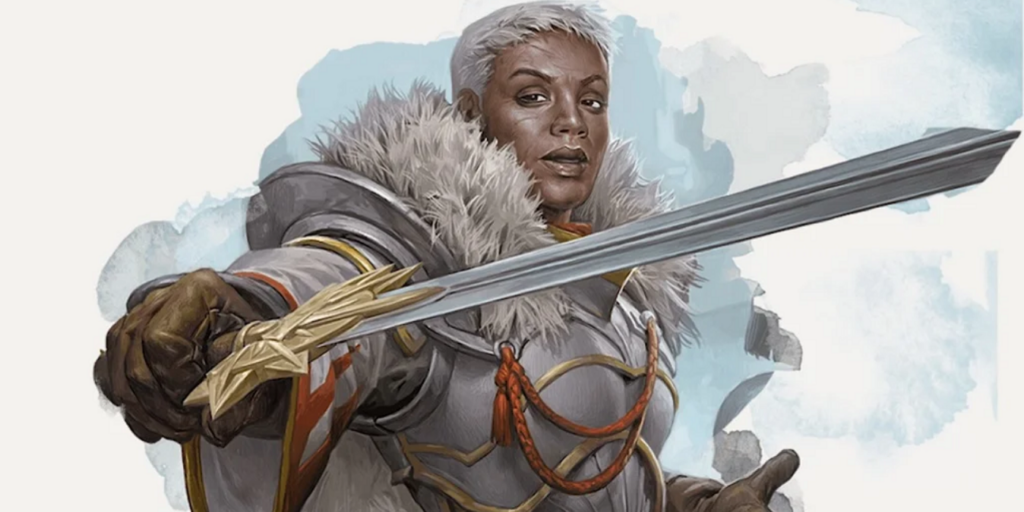