D&D: Magic The Gathering Brings A New Monster To Strixhaven 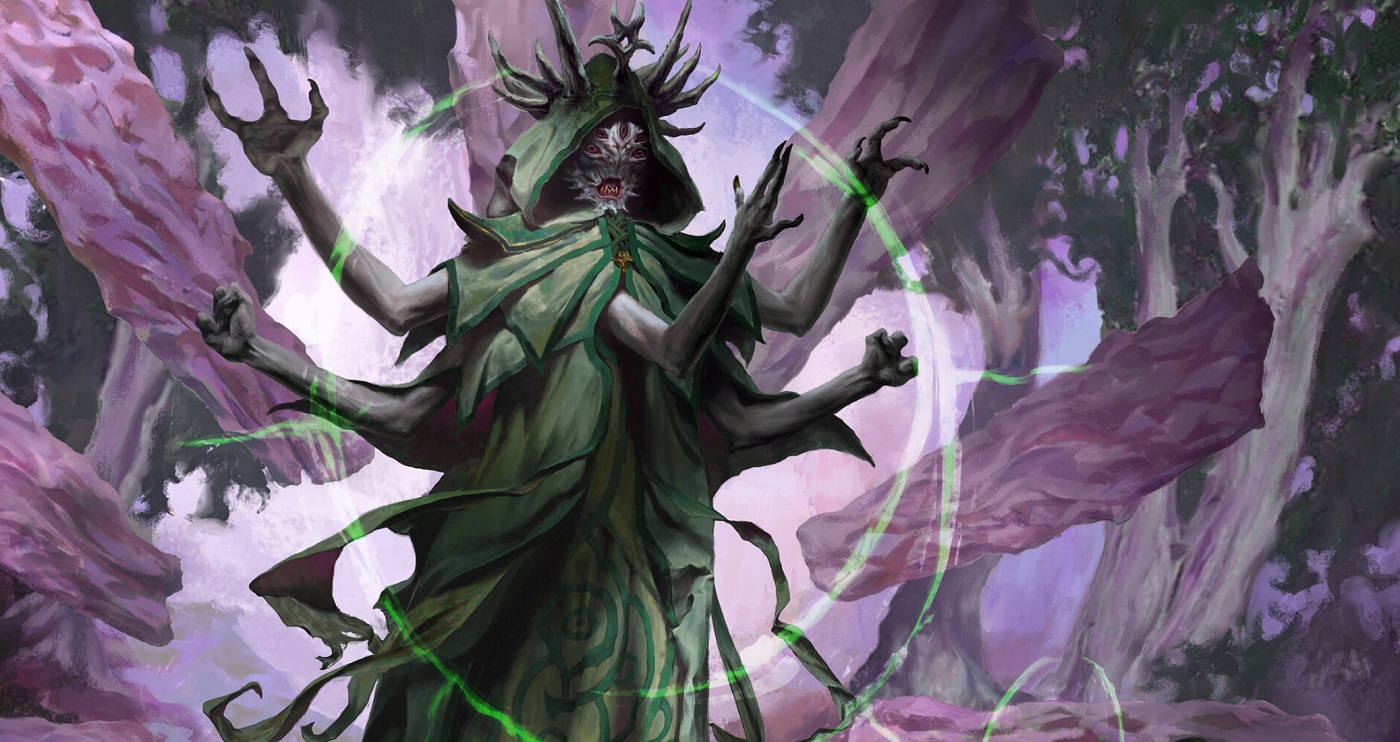 Strixhaven: Curriculum of Chaos is full of magic, mayhem, and new monsters– including a class of monsters originating in Magic: the Gathering.

Strixhaven spoilers continue to trickle out into the wild. With a release date just around the corner, we’re taking a look at some of the previews we’ve seen thus far.

Today we caught a glimpse of the world of Magic: the Gathering crossing over into D&D. This time, it takes the form of the Daemogoths, creatures first introduced in Strixhaven: School of Mages. 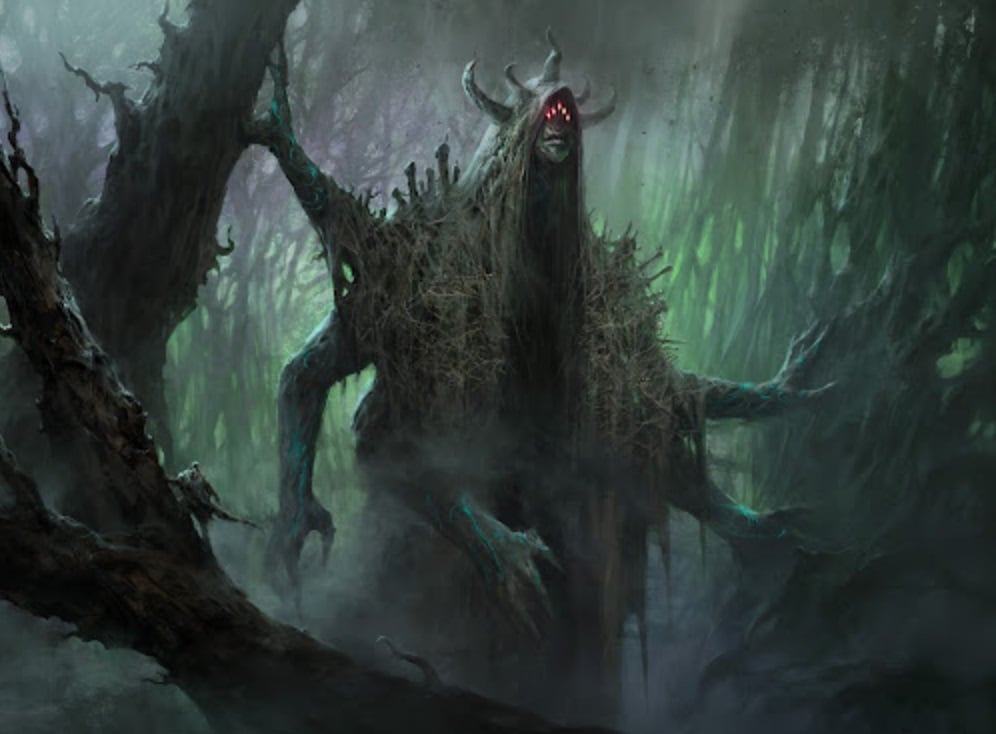 Daemogoths are demons originating from the plane of Arcovia, where Strixhaven is situated. These evil beings are notoriously difficult to control, but they have powerful magic and may offer it– but not for free.

These demons are willing to bargain with mortals. In Strixhaven: Curriculum of Chaos, they provide one of the few means by which you can access Supernatural Boons. But it comes at a terrible price.

They feed on misery and negative emotions, often lurking near battlefields and other sites of tragedy to consume the anguish that saturates the area. But if you want forbidden knowledge, there is nothing better than to track down a Daemogoth. Provided you can pay.

And if a Daemogoth’s victim is unwilling to pay the price, they may find themselves hunted by spectres. In Strixhaven: Curriculum of Chaos, we get two different kinds of Daemogoths, as previewed by YouTuber FryMinis. 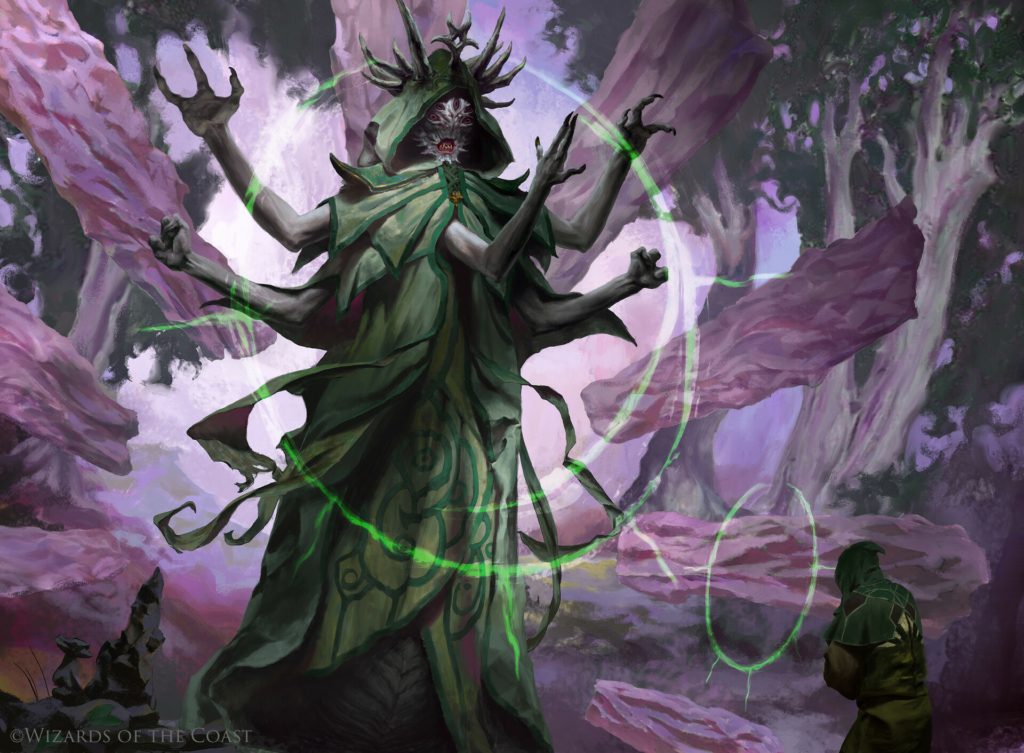 First up, we have the vanilla Daemogoth, or the Daemogoth Woe-Eater, judging from the Magic art. This fiend weighs in at CR 10 and can make multiple ranged spell attacks that damage enemies while healing the Daemogoth. Additionally it has a terrify ability that lets it deal psychic damage and frighten a creature.

But the real fun thing about this fiend is the Pact of Pain. It’s a special 10-minute ritual that the Daemogoth can use to forge a magical bond with a willing creature.

Once so bound, the Daemogoth can give the creature a spell from the Necromancy or Enchantment schools. But when they cast the spell, the creature takes 2d6 psychic damage.

The Daemogoth Titan, on the other hand, is a much more potent version. Its iteration of the Pact of Pain allows it to give a Supernatural Gift (per the DMG) to a target.

But the creature must spend two hit dice at the end of every long rest and take psychic damage equal to the amount rolled. This also reduces the target’s hit point maximum. 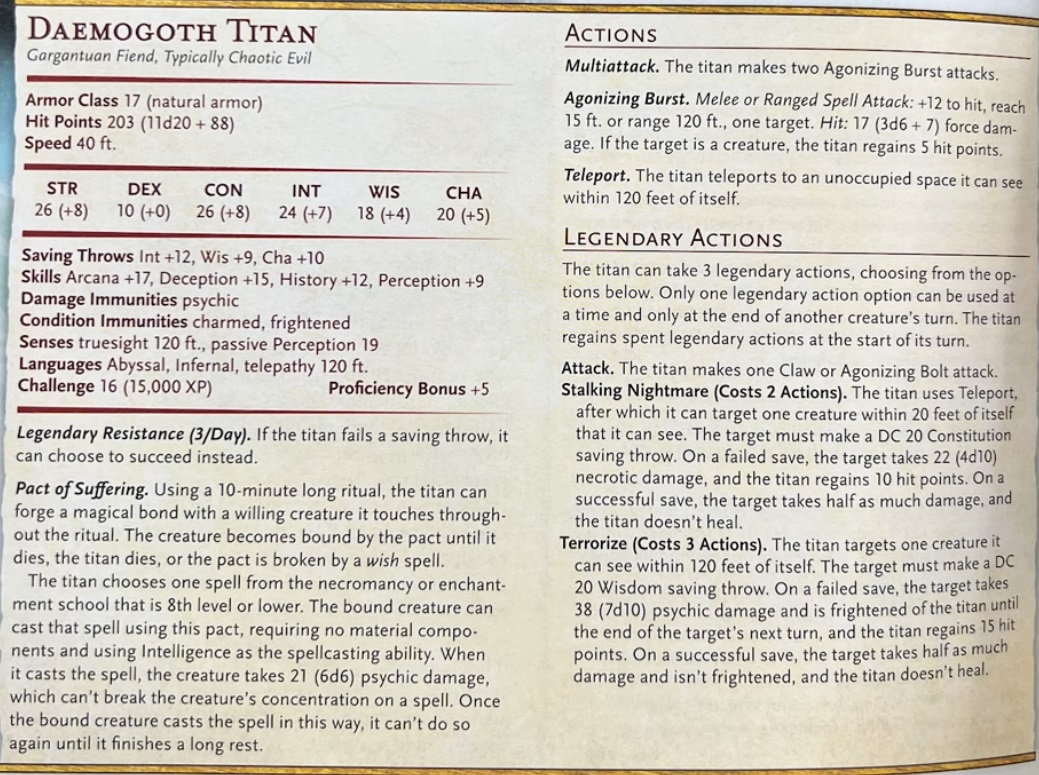