Star Trek: Picard goes Postmodern Jukebox in “Two of One” 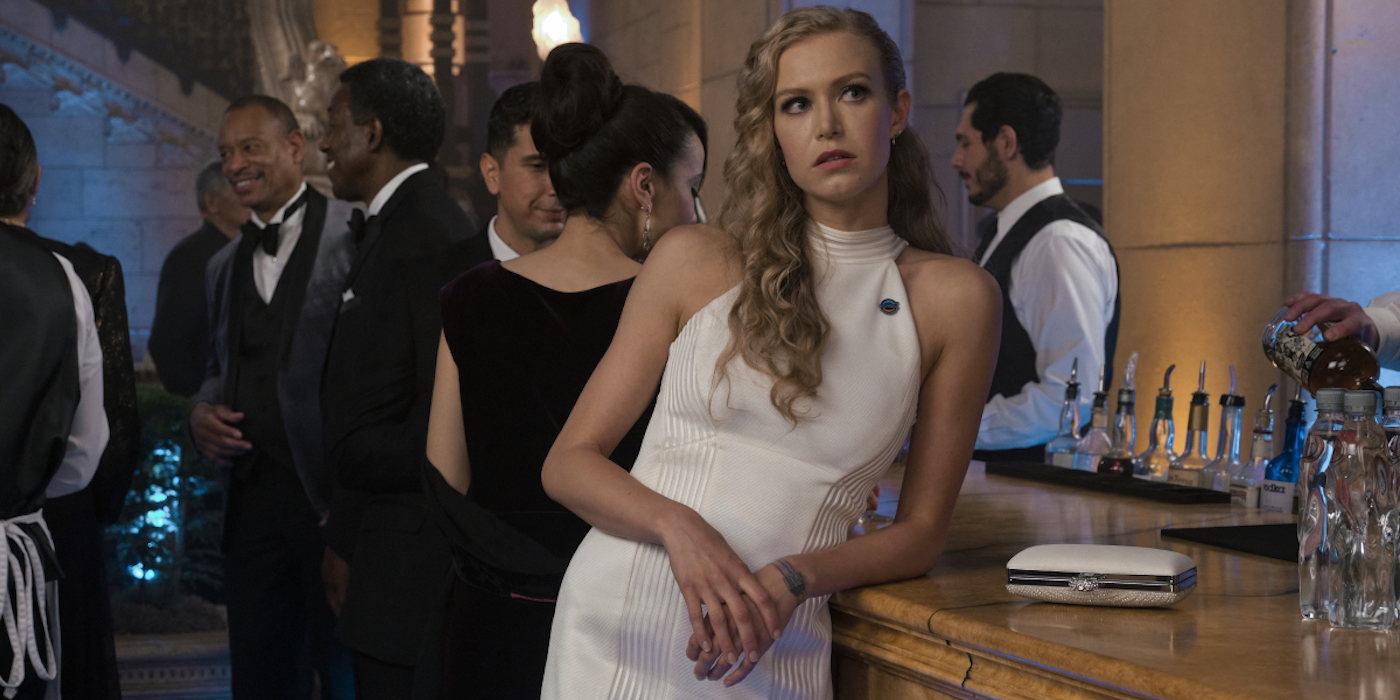 Picard’s super great grand aunt is depressed, Data’s mega great grand pappy is homicidal, and Agnes Jurati is obsessed with the super, mega great Pat Benatar. Hope you brought your boogie shoes, babes, because “Two of One” came to dance!

Previously on Star Trek: Picard, Jean-Luc meets Tallinn, Adam Soong meets Q, and Agnes and the Borg Queen come together. It all culminates right now with the squad gate crashing a NASA gala to save the future from fascism. Will the party go well or will everyone’s third favorite cyberneticist screw it all up? Let’s go to the video tape! 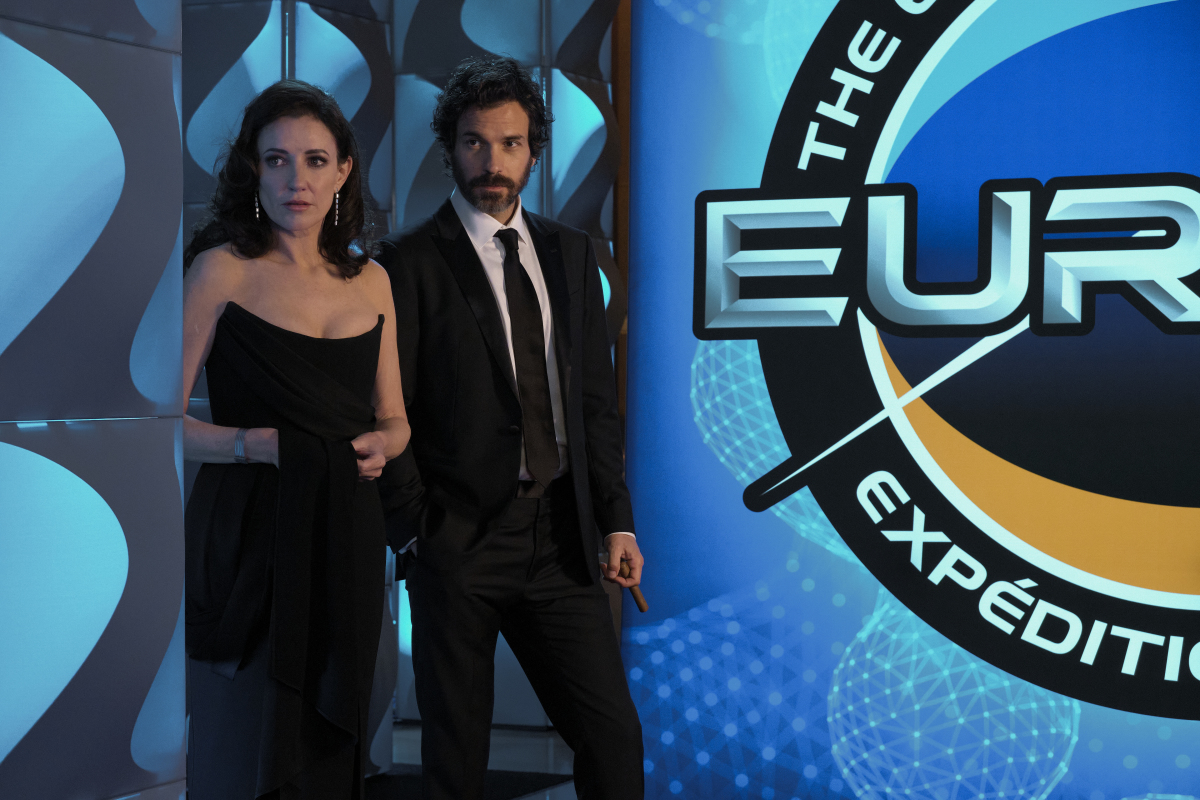 The plot of “Two of One,” just like most of this season of Star Trek: Picard, is split across three stories. Picard connects with his ancestor Renee. Agnes connects (a little too much) with the Borg Queen. And we finally learn the truth about Kore and Adam Soong. And just like the premiere episode “The Star Gazer” we start at the finish. Picard is laid out, blood trickling from his mouth, and the sounds of his crew mates fade in and out. What happened? What will happen?

Well, to start Agnes Jurati successfully gets the crew through the door. Bad news, though: she had to give a little more power to the Borg Queen to make it happen. But we’ll come back to that later. For now, Picard et al make their way into the gala and begin Mission: Get Renee To The Launch On Time. Everyone is having a dandy of a time. Seven is smiling, Rios has a real Cuban cigar, and Tallinn is maybe flirting with Picard. Maybe they’ll hook up in a broom closet! Who knows!

But there ain’t no time for flirtation, because Renee is tugging her ear. It might not sound like much, but Tallinn tells Picard the ear tug (and some hefty drinking) are signs Renee is spiraling. Our boy, Jean-Luc is all set for a heart-to-heart, when who should show up but Adam Soong. 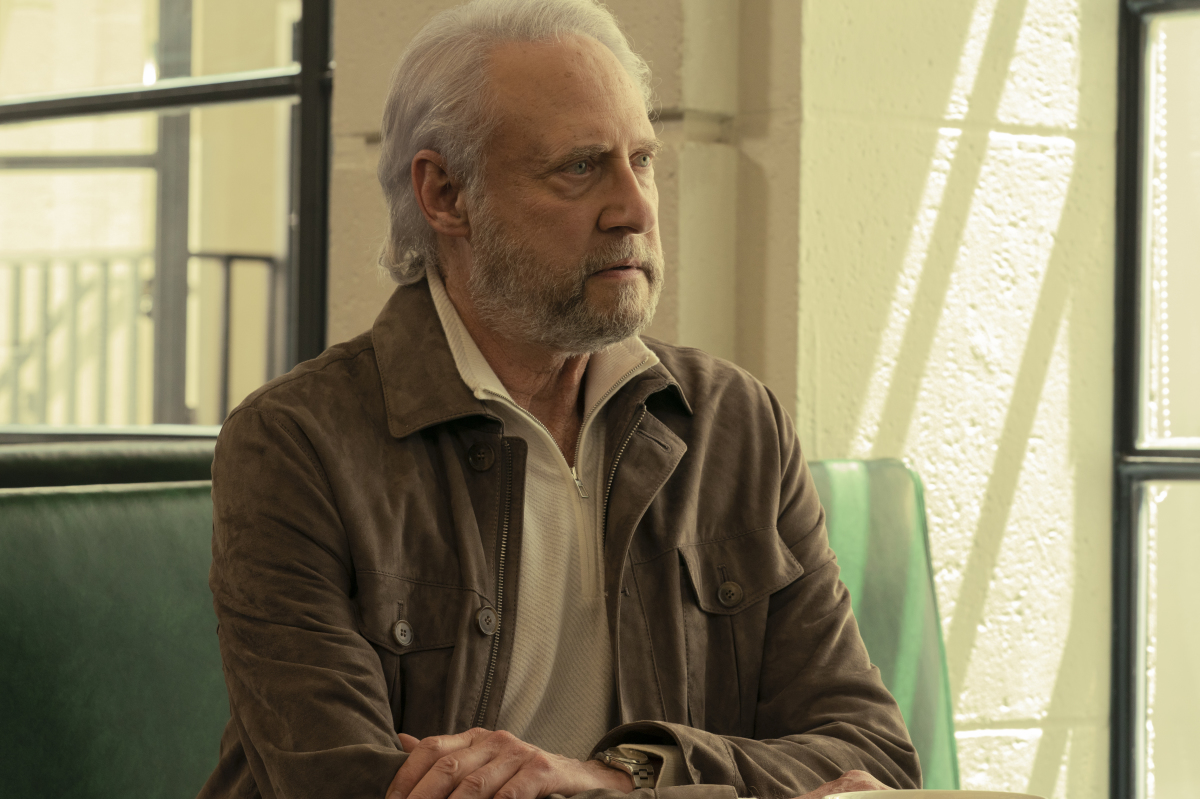 In exchange for Q’s Kore Cure (try saying that three times fast), Adam Soong rolls up to the gala to put the hurt on Picard. And by “the hurt” I mean that Soong pays his way into being part of “the board”. Basically, Soong pulls a one-percenter move and throws his money around in order to get security after Picard.

But the big Soong scoop is about Kore. We already know that she’s got a deadly allergy to *checks notes* the air and sun, but this week we find out why. It turns out that Soong didn’t so much father Kore in the traditional sense as he did genetically create her in a lab. In fact, Adam Soong has been creating versions of Kore for decades — and every one of them is dead of genetic disease. Kore finds out the truth this episode and it is D A R K. It turns out Soong doesn’t love Kore as a daughter so much as he loves her as “his life’s work”. Woof.

But that’s not the only dark reveal for Adam Soong. There’s also the lengths he goes to in order to prevent Renee and Jean-Luc from having their heart-to-heart. 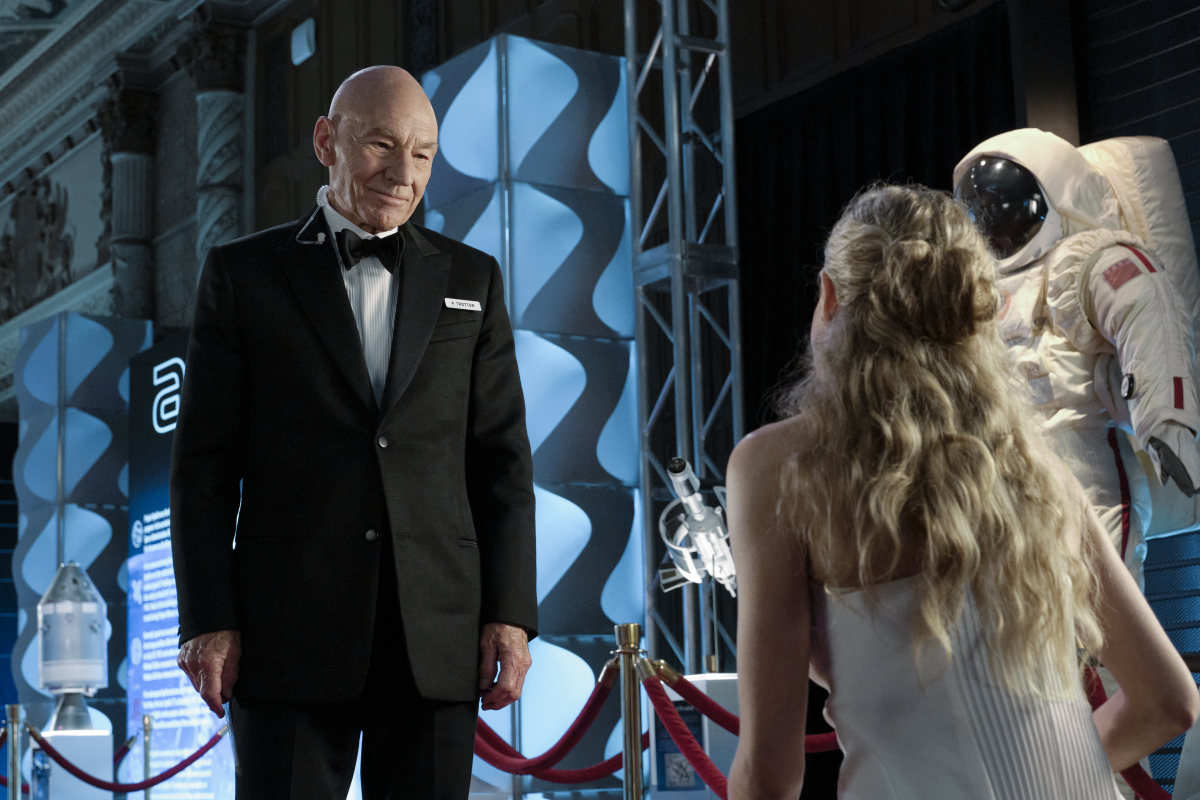 Two Of One – Picard Edition

Despite Soong’s efforts to put up a road block (that’s a joke of foreshadowing, stay tuned) between Renee and Jean-Luc, the two do meet. After Renee runs away to contemplate abandoning the Europa mission, Picard finds her. He’s dressed as a security guard to, uh… avoid security. Good plan? But the two do get to chat about how hard she’s worked and what she might do with the Europa mission. Jean-Luc recognizes in Renee the same sadness and struggles his own mother faced. Renee thinks Jean-Luc’s mother was lucky to have him, but the pained look on his face tells a different story.

Thankfully, Jean-Luc convinces his ancestor to go through with the Europa mission. Unfortunately, on the way back to the party, Adam Soong tries to commit the ol’ vehicular manslaughter on Renee. Soong wings up hitting Jean-Luc with his car instead which leads us back to where we started. But there’s still two more people unaccounted for: Agnes Jurati and the Borg Queen. 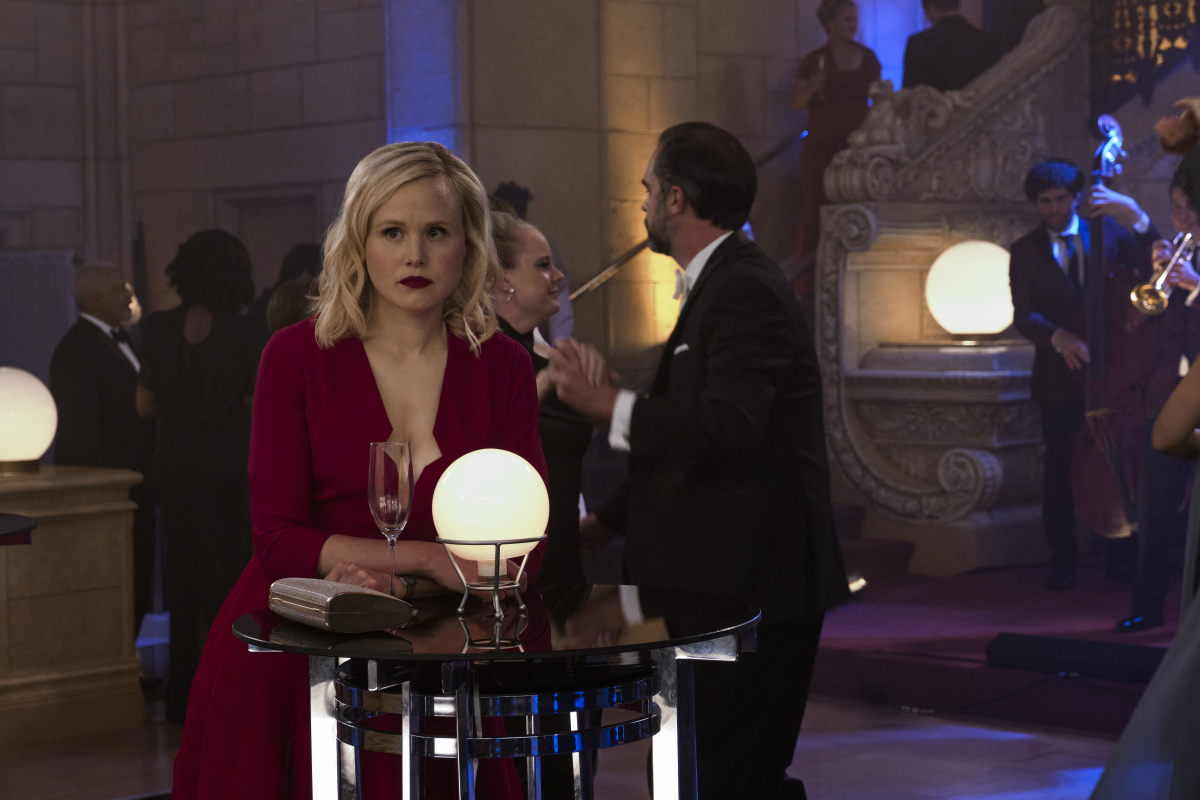 We’re Running With The Shadows Of The Night… Or Are We?

After Agnes gets Team Picard into the party, she chills with the Borg Queen voice in her head for a while: you know, as emotionally healthy people do. The Borg Queen convinces Agnes to get a drink where she meets up with Rios. Rios is worried about Agnes and tells her that he cares about her. The Borg Queen seizes control of Agnes’ body and forces her to kiss Rios. As a result both of them feel very awkward.

However the true weirdness comes while both Picards are on the run. In order to create a distraction, the Borg Queen takes control of the lights at the party. And then Agnes walks out onto a kind of veranda and begins to sing “Shadows of the Night” by Pat Benatar. Yes, really. It turns out that the Borg Queen isn’t helping Agnes so much as she’s trying to get Agnes’ endorphins going. As a result, the Borg Queen is able to take full control of Agnes’ body. Uh oh. 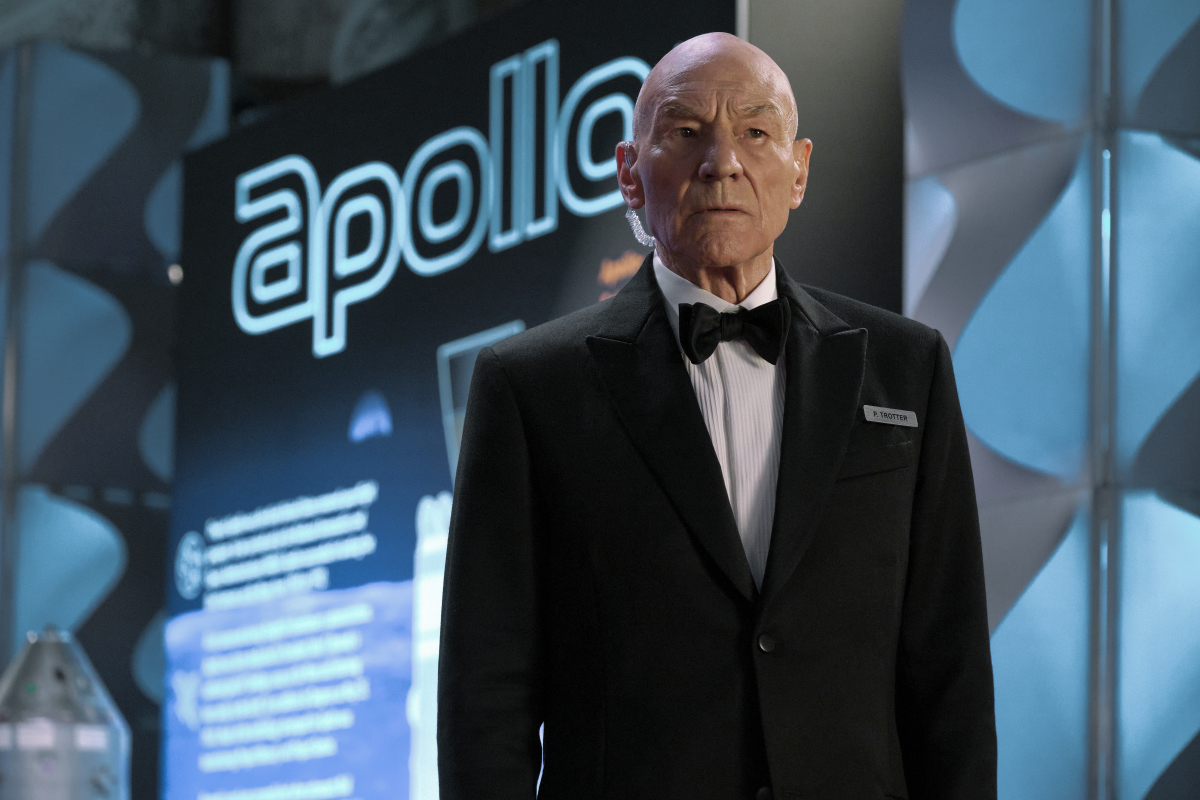 Picard’s Misadventures Getting Hit By A Car

“Two Of One” ends with Rios taking Picard and the squad to Dr. Ramirez’s clinic. Ramirez tries to resuscitate Picard with a defibrillator but since our man is a robot, the device explodes. The good news is that Picard’s body is okay. The bad news is that Picard will not wake from his nap, not even for a slap. Ramirez is understandably mad as hell at Rios for bringing this drama to her front door and splits the scene.

As the squad stands over Picard, Tallinn hypothesizes that he is trapped inside of his own memories. This theory checks out for those of us in the audience, as we’ve been seeing flashes of Picard’s childhood throughout the episode. Tallinn says she can use her Supervisor tech to go inside Picard’s mind and pull him out. Weird flex, but okay. Raffi is against the plan, but everyone else is like “shrug, go for it, bro”. Because they are committed.

Raffi wonders how things could get any worse. We get our answer as a Borg-controlled Agnes walks down the highway towards the city, presumably to assimilate the populace. Oh dear. Fade to black and roll credits because the episode is over. 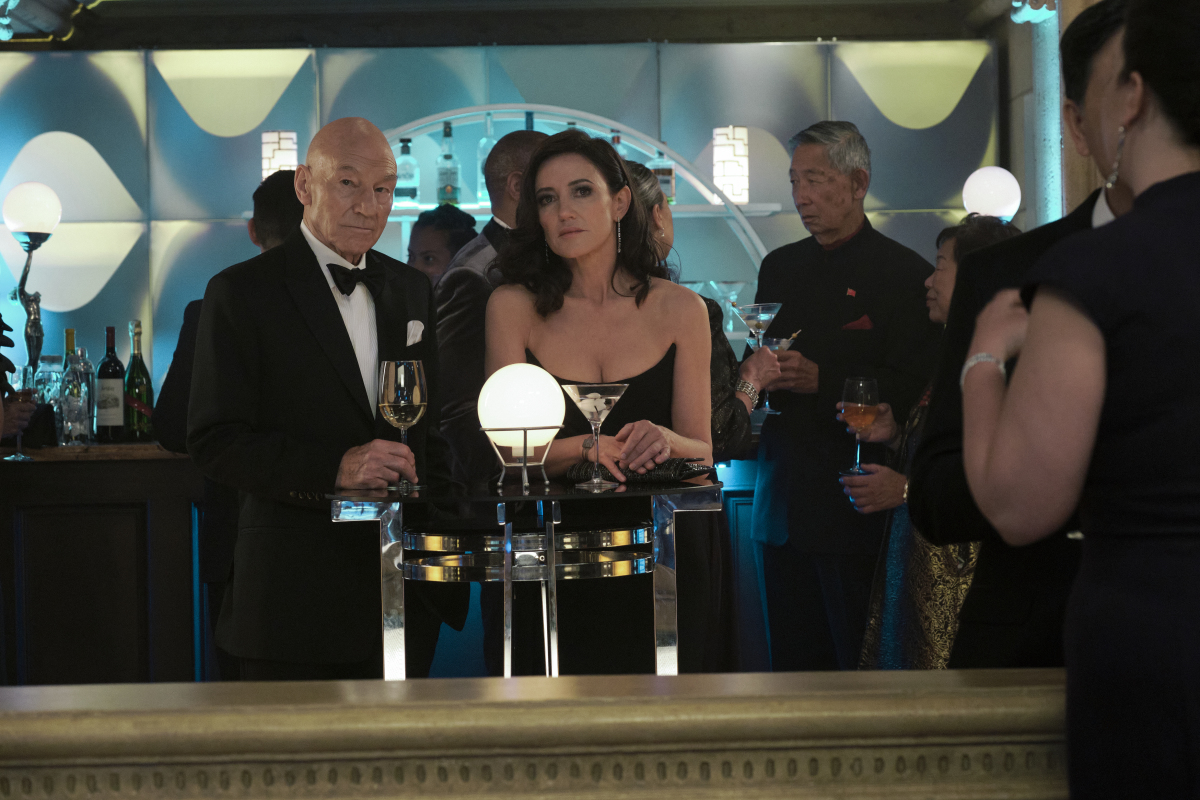 If you are enjoying these tight and short episodes, good news: “Two Of One” clocks in at around 35 minutes. However, in this instance the episode length likely won’t be the deciding factor for whether or not you enjoy “Two Of One”. It all depends on whether or not you are willing to run with the shadows of the night. Can you accept that the Borg Queen can control all the electrical devices in the building? Can you accept that Agnes Jurati can belt it like she’s Pat Benatar? And are you cool with the house band rolling with all of this?

If the answer to all those questions is yes, then “Two Of One” is destined to be a Star Trek: Picard all-timer for you. However, I could not get myself there, and, believe me, I wanted to. Because, “Shadows of the Night” is some delicious ’80s cheese. And, yes, Allison Pill can sing really well. But as cool as it was seeing Agnes and The Borg Queen take a bow together, it just doesn’t come together for me. In fact the problem with “Two Of One” is that a lot of the plot notes feel atonal from one another.

Agnes and the Borg queen feels like the belong in their own entirely separate story. Ditto when it comes to Picard talking to Renee. In their own episodes I think these would work much better. A whole episode where Agnes slowly gives in to the Borg Queen could’ve been an interesting, black comedy. Picard and Renee both on the run and finding themselves thrust together due to circumstance is a story worth telling. Apart they’re compelling, together they are oil and water. 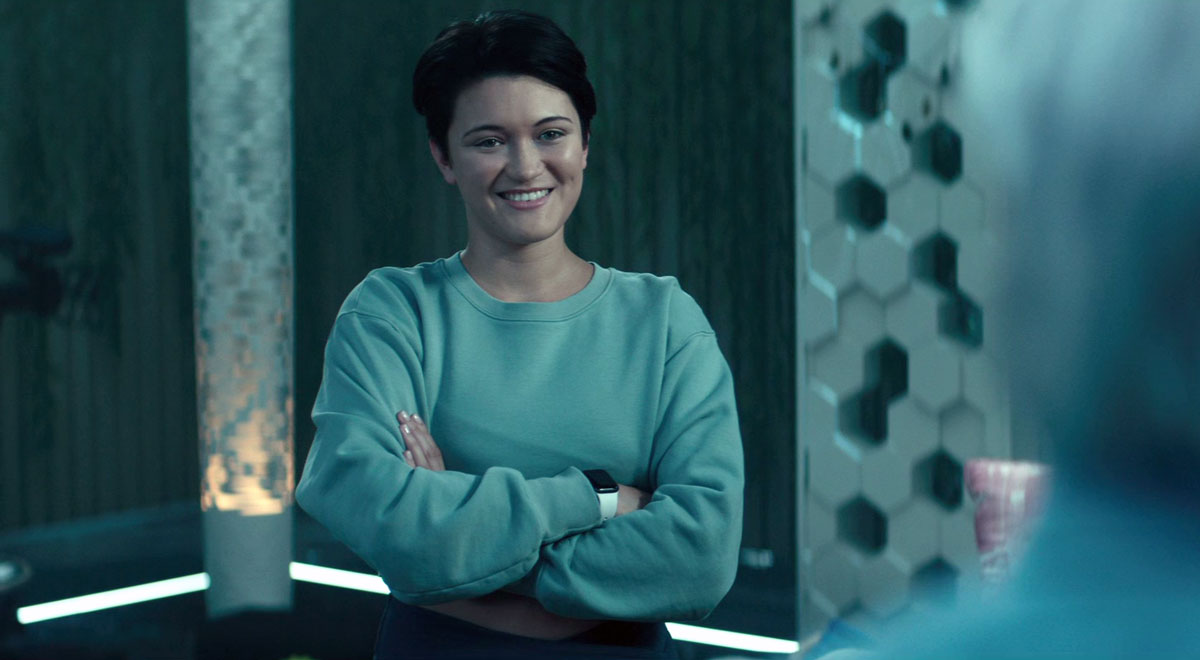 Does Kore Have The Internet?

If you don’t think about the reveal of Kore’s origins, it’s deeply disturbing. Last week, we were given the distinct impression that Adam Soong loves his daughter so much that he’d kill for her. This week we learn that Soong is more in love with his own ego than he is his “daughter”. What drives Soong isn’t a desire to save Kore’s life, it’s to prove that his life’s ambition of eugenics is worthwhile.

I want to feel the mounting dread as Kore discovers the photos and videos of previous clones of herself. I want to feel her crushing claustrophobia as I imagine what it would be like if I were in Kore’s position. Instead I just keep thinking, “How doesn’t she already know all of this?” We see Kore Googling her father. Are we supposed to think she’s never thought to do that before? Or that she’s never checked Soong’s computer files in her entire life of basically being trapped in a box?

Frankly, if you told me the reason Paramount announced this week that the cast of Star Trek: The Next Generation is returning for Star Trek: Picard season 3 was to distract from “Two Of One,” I would believe you. 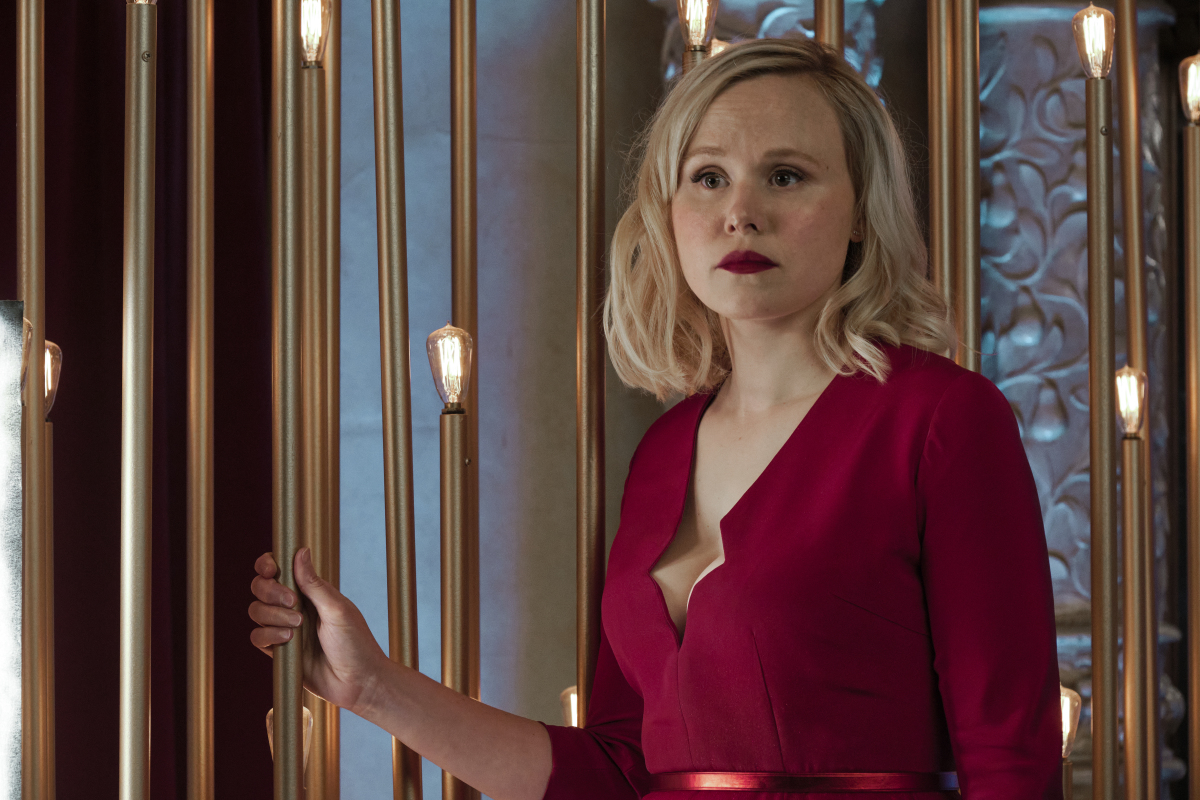 Last season’s seventh episode “Nepenthe” was all about Picard revisiting his past, so the same should hold true this season. We already know that there are aspects of Picard’s past not even he knows about, so it’ll be interesting to see what really happened to his mother.

When Agnes’ gets taken over by the Borg Queen and her eyes go black, did anyone else get flashbacks of Dark Willow from Buffy The Vampire Slayer? 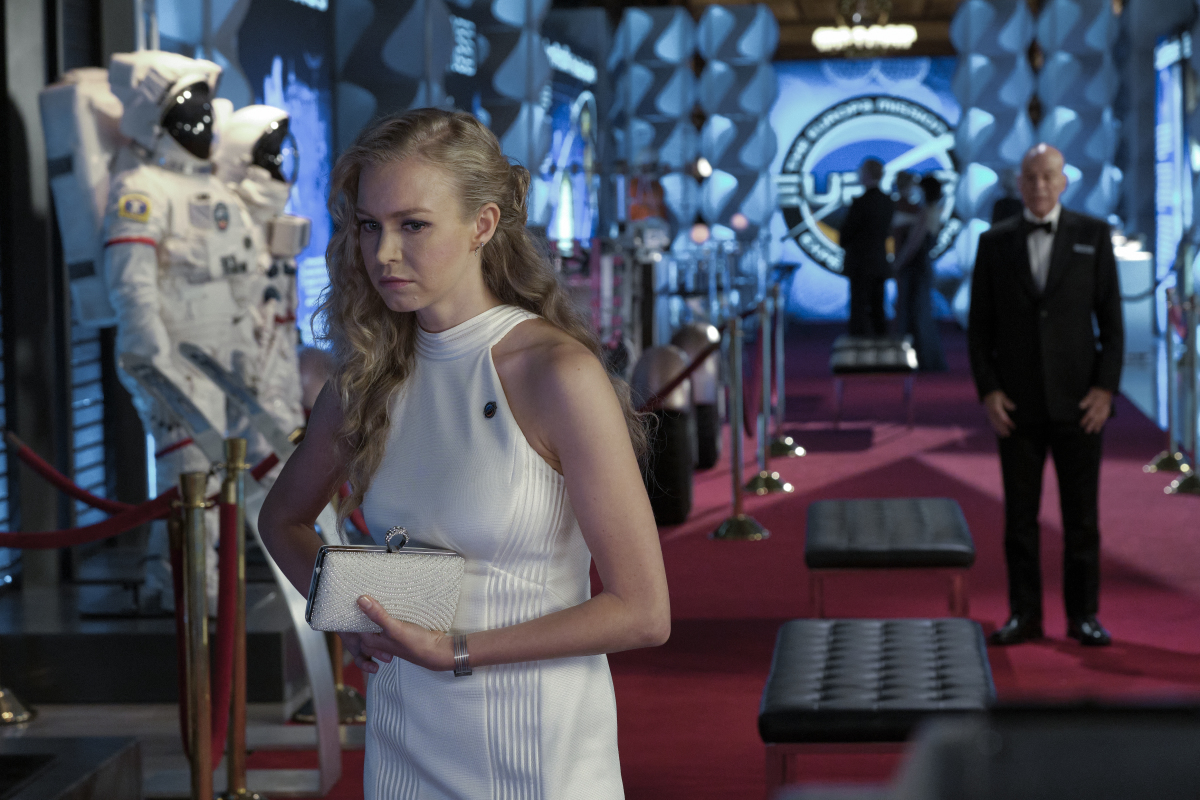 We know Tallinn is entering Picard’s mind. Are we destined to find out why she and Laris both look like Orla Brady? And is the confirmation of TNG‘s returning a hint that some of them might appear sooner rather than later? There are theories that Jurati is the new Borg Queen from this point forward. And there are theories that, due to time travel shenanigans, she is the origin point for the Borg as well. But for now, the big question is this: what will the Borg Queen do in 2024 and how can she be stopped? What are your predictions for next week’s Star Trek: Picard? Tell us what you think will happen next! 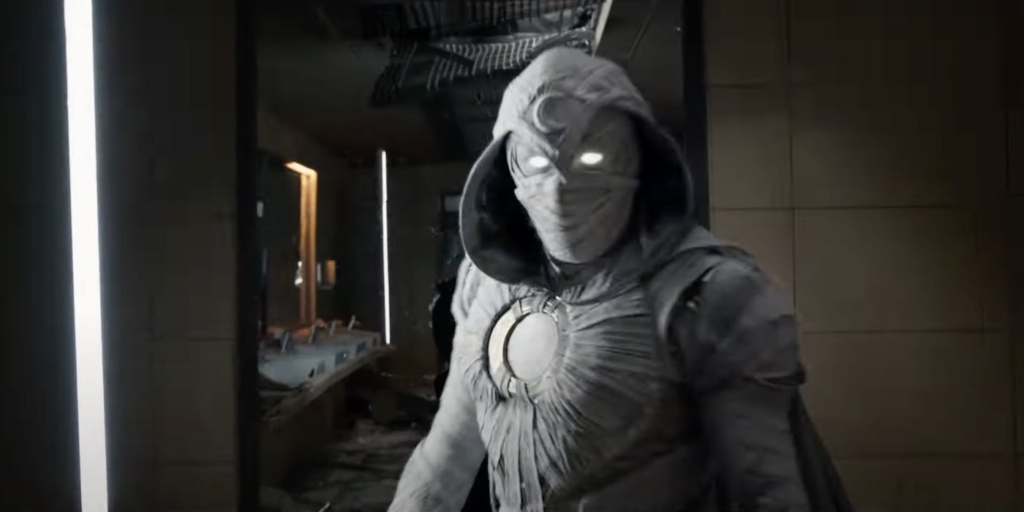