The Marvel Crisis Protocol (MCP) Core Set is one of the best ways to get into an amazing tabletop game. For under 100 bucks the Core Set delivers 10 MCP characters, terrain, dice and all the other things needed to play endless hours of this exciting Marvel game. After playing a few games with the Core Set many players are going to want to branch out to explore the other characters, or even the whole new Affiliations of characters, that MCP offers. The Core Set itself comes with 2 leaders from different affiliations in Red Skull of the Cabal and Captain America of the Avengers. While it can be tempting to dive straight into the other Affiliations that came out after the Core Set released the Affiliations found in the Core Set are still completely viable in the game today. The bad guys side of the Core Set is represented by Red Skull his Cabal, and these villians are still as dangerous as when the game first launched 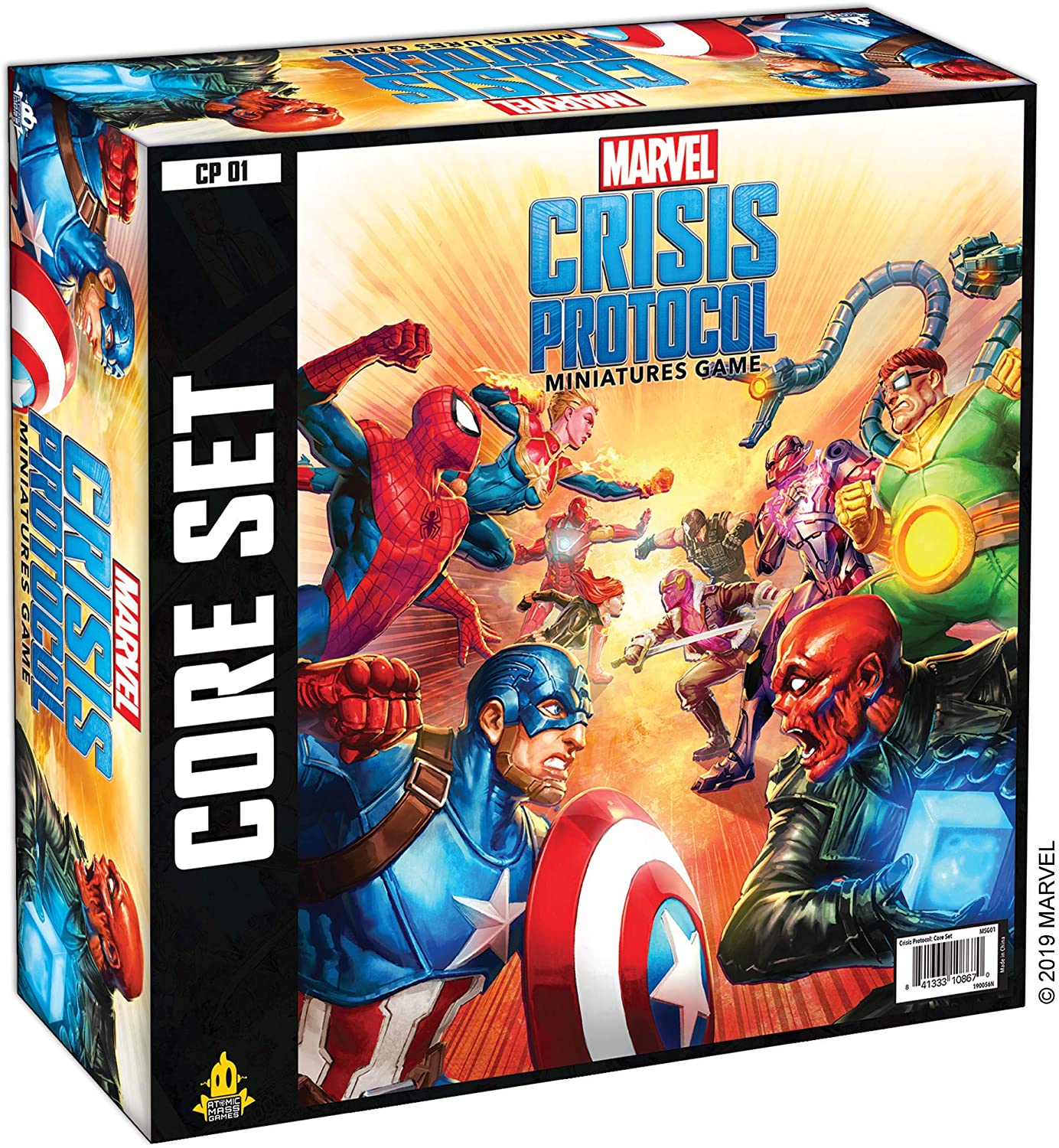 Red Skull and his Cabal have fallen out of favor as more and more Affiliations have been released in MCP, but Red Skull still has one of the best Leadership abilities in the game. Red Skull’s leadership allows your characters to gain a power each time they damage an enemy. This allows Red Skull led rosters to gain power at a much faster rate than their opponent. Power in MCP is extremely important to manage properly since it is the mechanic that allows your characters to make the most out of the abilities found on their cards.

Some rosters really need to think about how they are going to gain and spend their power, but a Cabal roster led by Red Skull really doesn’t have that problem. One thing a Red Skull led Cabal roster wants to avoid is mitigating this advantage by picking Crisis’ that also make your opponent generate Power at an increased rate. Playing things like Infinity Formula Goes Missing or Struggle for the Cube will mean your opponent is basically getting YOUR Leadership ability in gaining power for free! 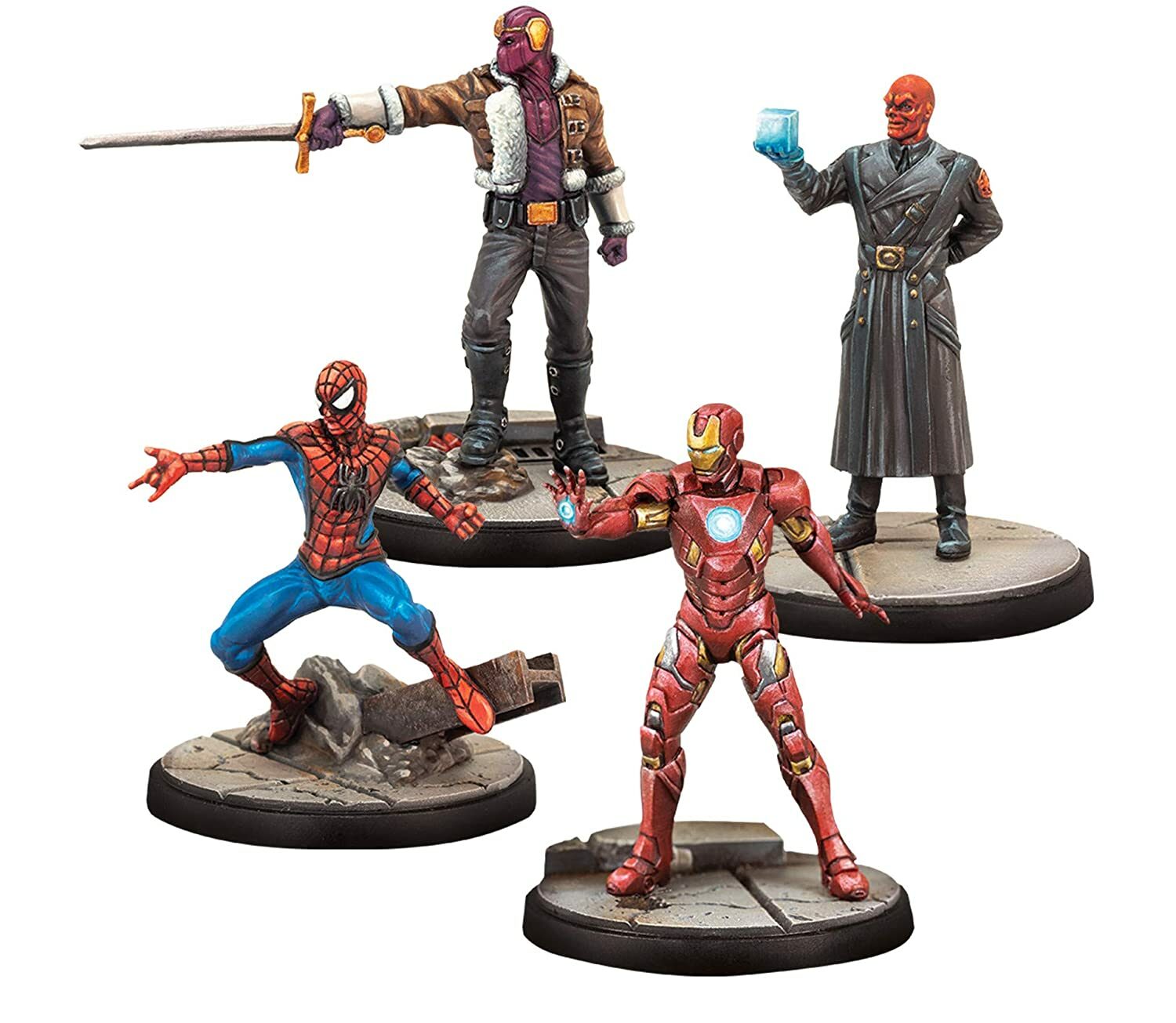 Red Skull isn’t useful just because of his awesome Leadership though. Red Skull’s other abilities make him no slouch for a 4 threat character. With a solid 1 Power Range 4 Cosmic Blast attack Red Skull will be able to sit in a relatively safe position while supporting the rest of your characters. With the ability to siphon power from his Cosmic Cube and then immediately use that power to place himself or an allied character within 2 Red Skull’s roster will never been caught in a terrible position. 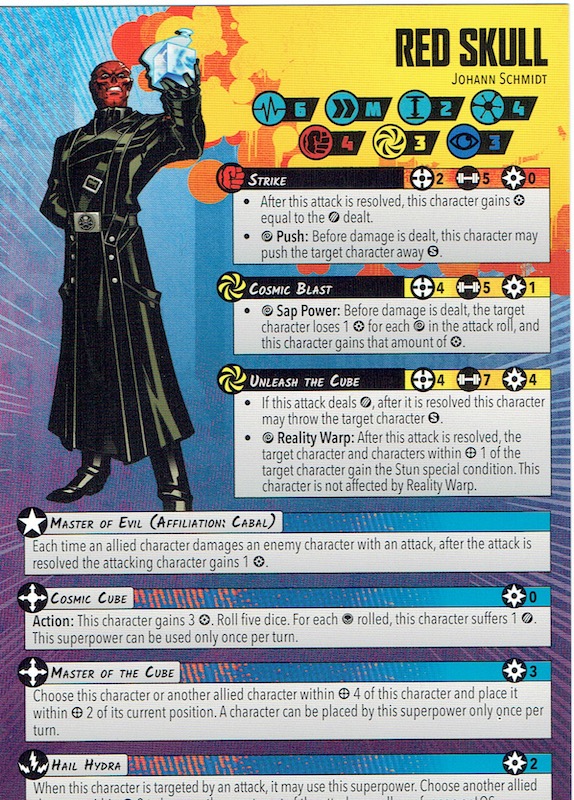 Speaking of character’s Red Skull wants to move around with the Cosmic Cub, if a player is looking to dive deeper into the Cabal Affiliation after picking up the Core Box they can’t go wrong with MODOK. MODOK brings some seriously high damage potential to a roster with his attacks and his ability to throw terrain, but he also brings some excellent control with his Bow to the Will of MODOK ability. This game is all about positioning and action economy, and being able to move your opponents models around negatively affects both of these. 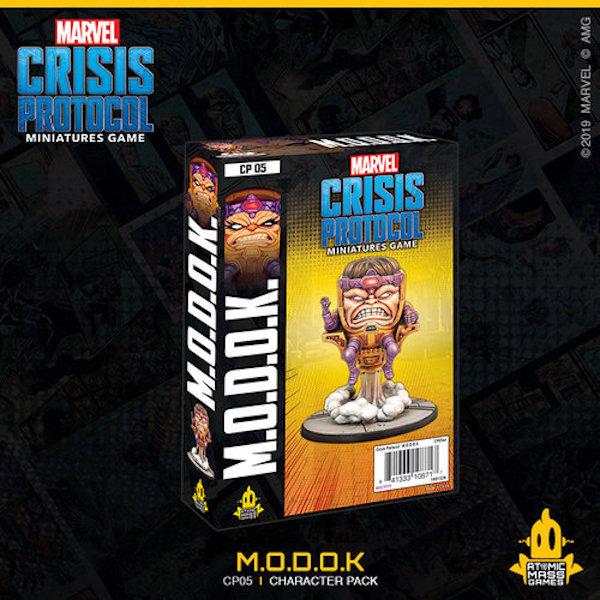 The Cabal Tactics Cards are also above the curve for the overall game. Dark Reign allows one of your characters to pay 3 Power (and remember a Red Skull led Cabal Roster isn’t going to be lacking for Power) to give full re-rolls on attack dice again an enemy character. You keep the benefit of these re-rolls until the end of Round! As experienced MCP players know, the dice in this game can be fickle. In a game with just 3-6 models per side, that just get 2 Actions per turn, those wild dice spikes are going to be incredibly noticeable. Dark Reign lets the Cabal player pay 3 Power to say, “that character is not going to be a problem after this Round”. 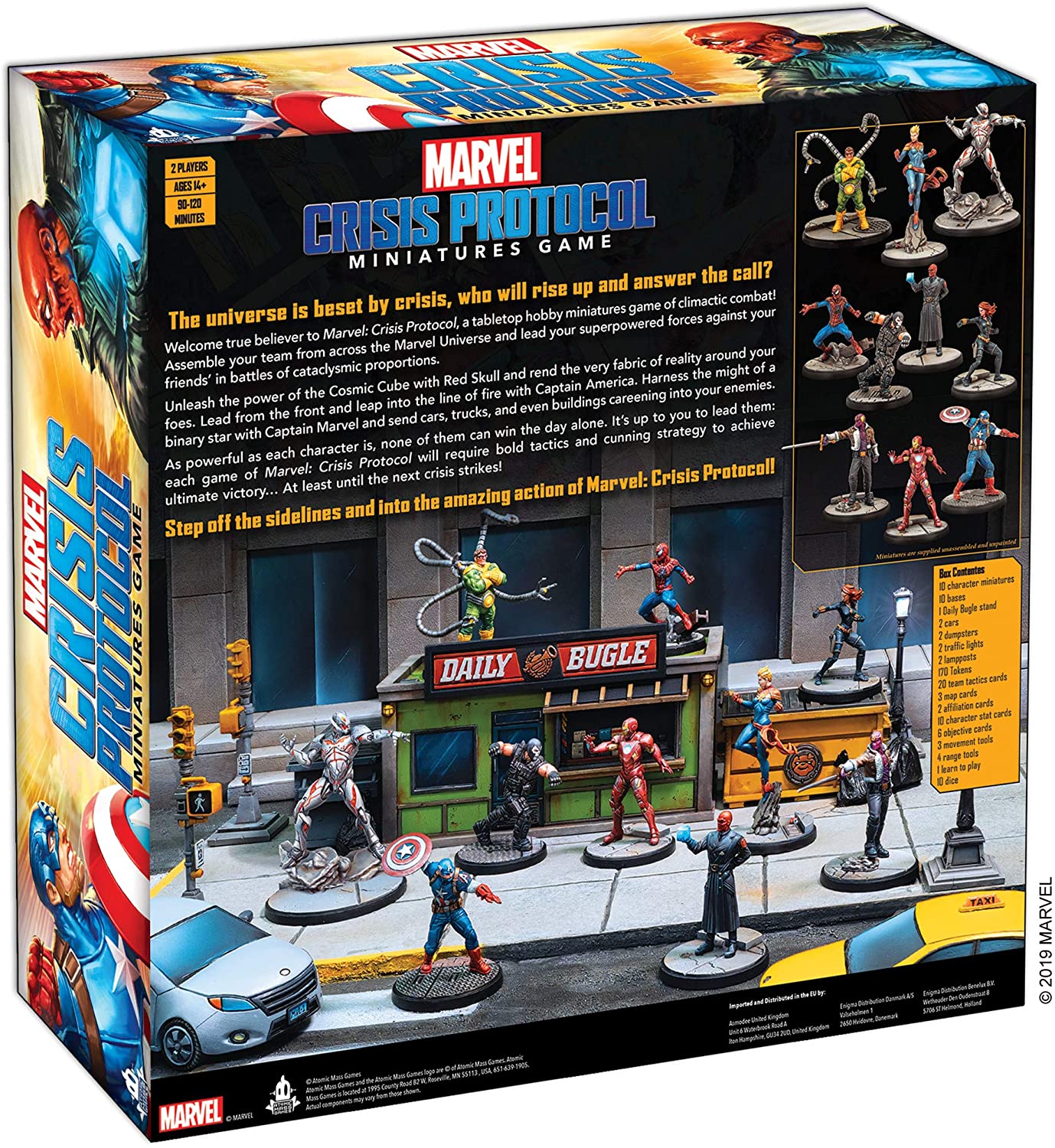 Cosmic Invigoration is also an amazing card, but it will take slightly more set up than Dark Reign. Being able to re-activate a Character is extremely strong. A lot of the strategy in MCP comes in knowing when it is safe to go in for an attack. Typically this happens when your opponent is out of activations in a specific area of the table allowing you to attack without retaliation.

Cosmic Invigoration can make your opponent think twice about diving into that Character who has already activated. The slight downside of this card is that the character who will get reactivation needs to be within Range 2 of Red Skull and they may even take a little damage from being re-activated. This card just can’t be used on a heavily wounded character since the chances are good you will do a couple damage to them. The short range is less of a problem with Red Skull thanks to his enhanced mobility with the Master of the Cube ability. It is not out of the ordinary for Red Skull to move toward a character to reactivate with Cosmic Invigoration, Master of the Cube within range and even use his last Action to throw in an attack of his own. 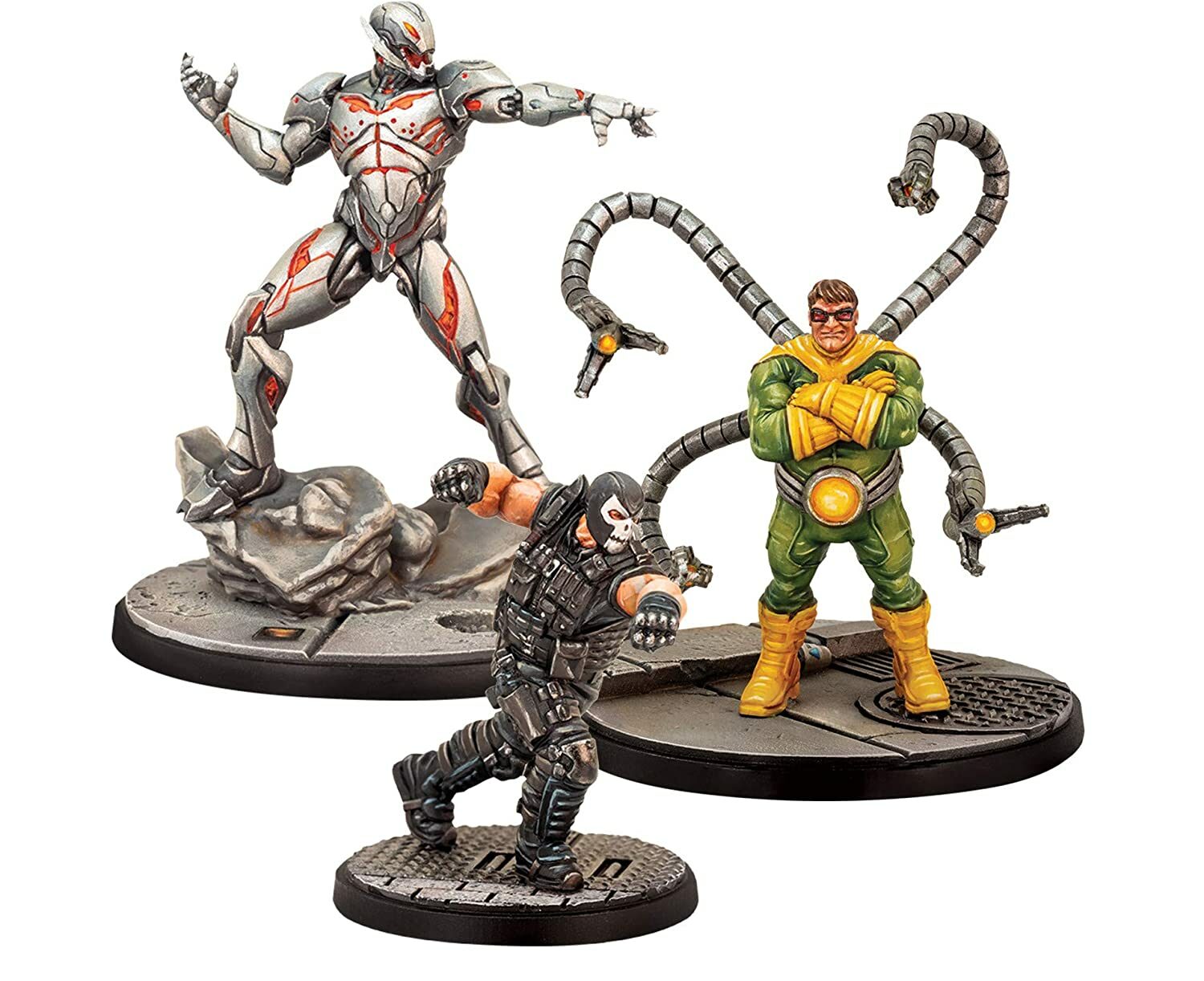 Cabal was one of the first two Affiliations introduced into MCP, but it is still one of the most fun and competitive choices. With some amazing Tactics Cards, a huge array of characters to choose from and one of the best Leadership abilities in the game a Cabal player will be spoiled for choices during all of their games of MCP. Next week we will take a deeper look into specific characters in the Cabal affiliation to see how easy it is to build a solid 10 villain roster that can be expanded out of the Core Set.

You can purchase discounted MCP products in the FLG web-cart! 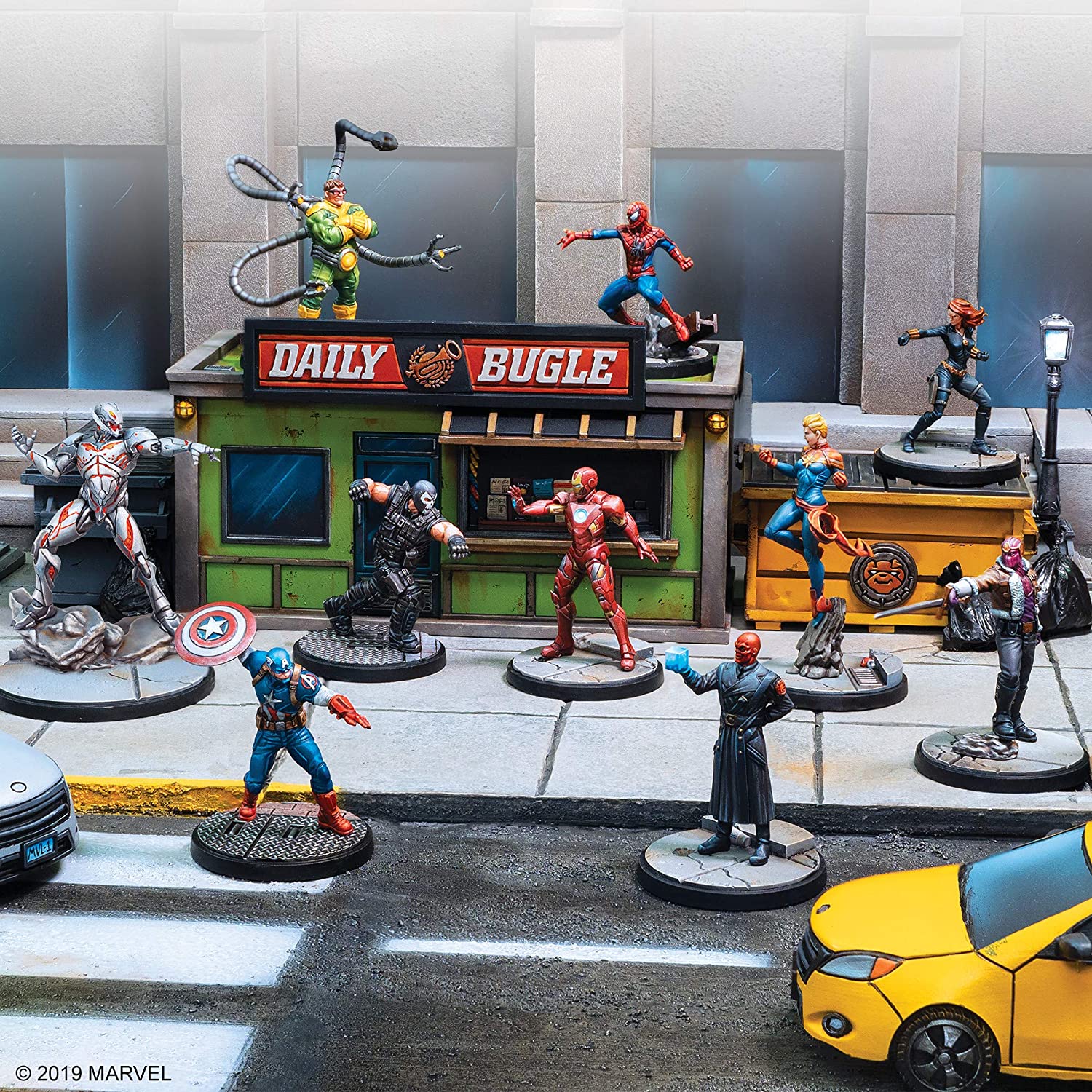 Author: Reece Robbins
Reece Robbins, is one of the most respected names in tabletop gaming. He founded Frontline Gaming and the largest Warhammer 40K tournament in the world, the Las Vegas Open. Reece has been playing competitively and covering Warhammer since the 1980s. He has won major events including Adepticon.
Advertisement
Atomic Mass Games MARVEL Crisis Protocol Rules Tactics Wargames
Advertisement

'Star Wars: Armada' Is Back, Baby! 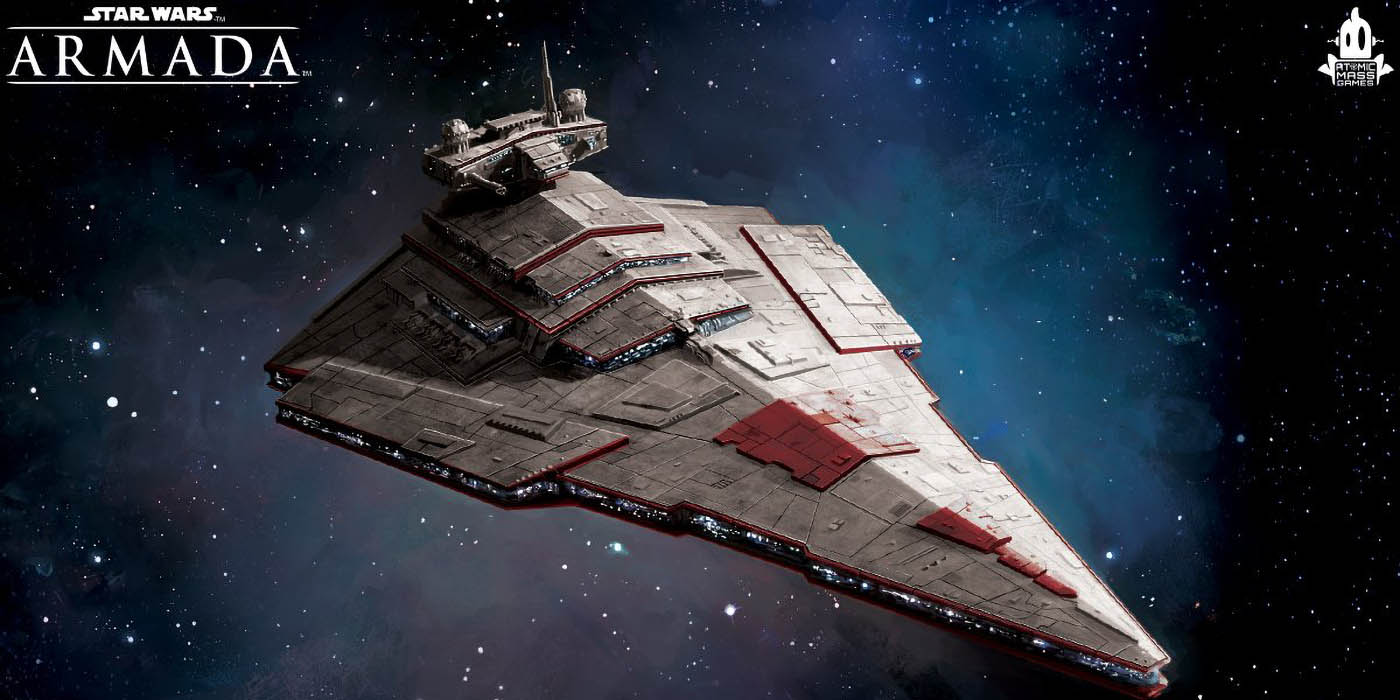