Marvel Explained: Dark Dimension Damsel to Sorcerer Supreme –Who is the Sorceress Clea? 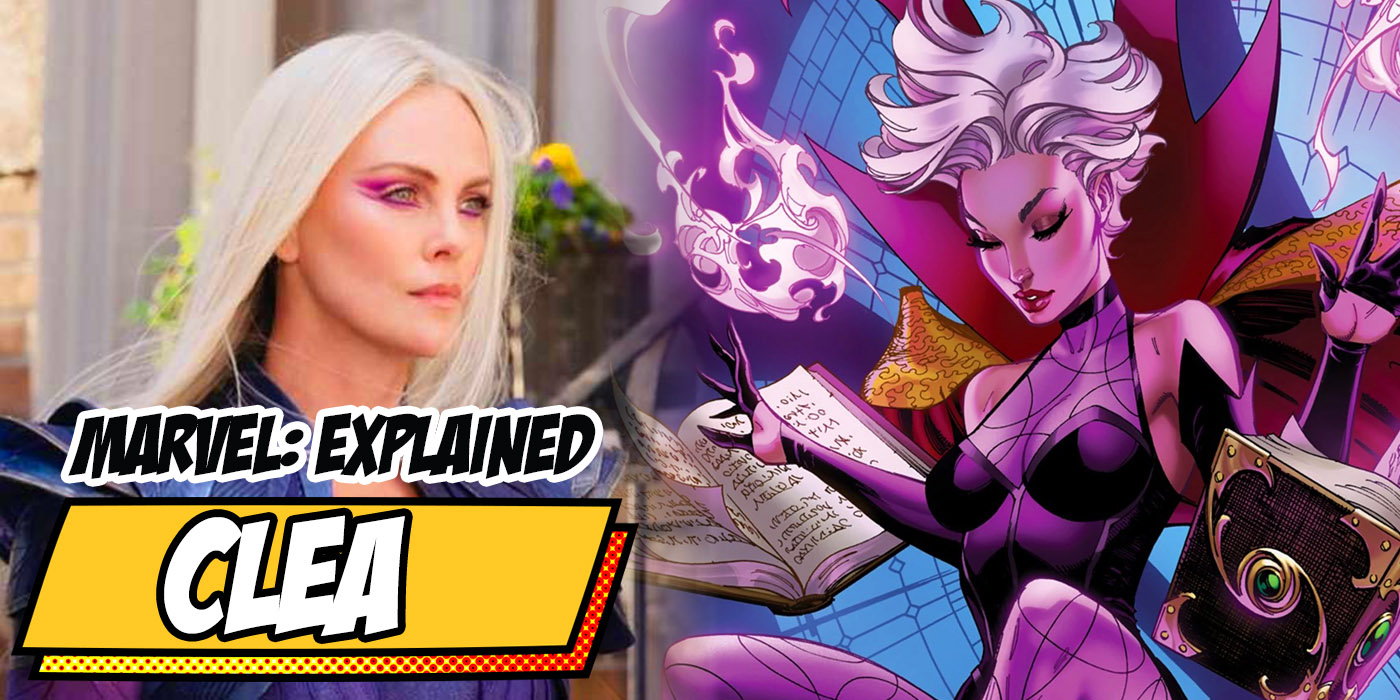 Now that you’ve seen Charlize in all her purple Dark Dimension glory, what’s next? Who is Marvel’s Clea? Will she be the Sorcerer Supreme?

She’s the ruler of the Dark Dimension, the wife of Doctor Strange, and currently the Sorcerer Supreme. Now that Clea has joined the legion of Marvel characters who’ve made it to the big screen, it’s time we all give this mistress of magic the spotlight she deserves. 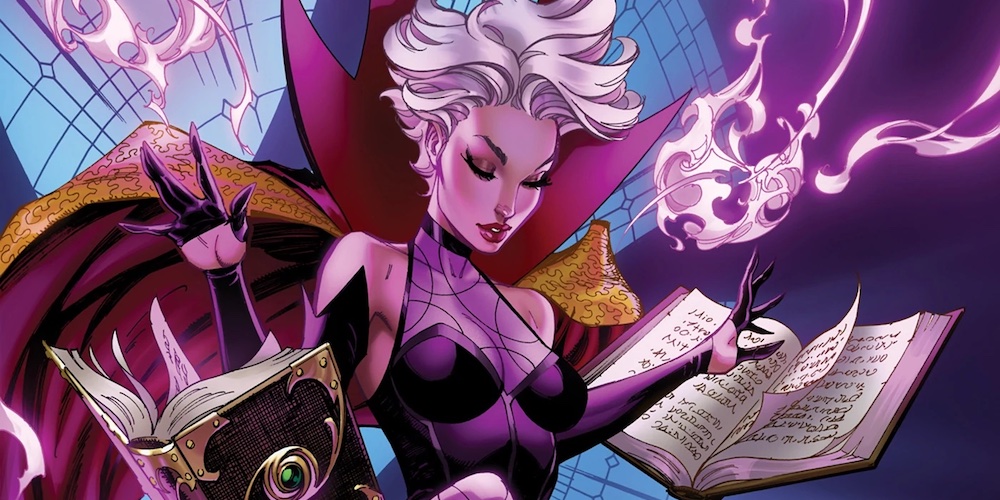 Rulers of the Dark Dimension

You remember Dormammu, yeah? He’s the bundle of conscious dark energy you often see Doctor Strange fighting with? This all starts with him and his sister.

Dormammu and his sister Umar came to the Dark Dimension in hopes of creating bodies for themselves. When they arrived, the dimension was ruled by a king named Olnar. The beings who occupied the Dark Dimension had lived in peace for a long while under Olnar’s reign. But the King wanted more, so he granted Dormammu and Umar a place in his kingdom if they would help him expand his empire across dimensions. But of course, Onlar eventually bit off more than he could chew – he popped into a dimension filled with the Mindless Ones and they killed Olnur. They also overran the Dark Dimension. I think there’s a lesson here about being grateful for what you have. 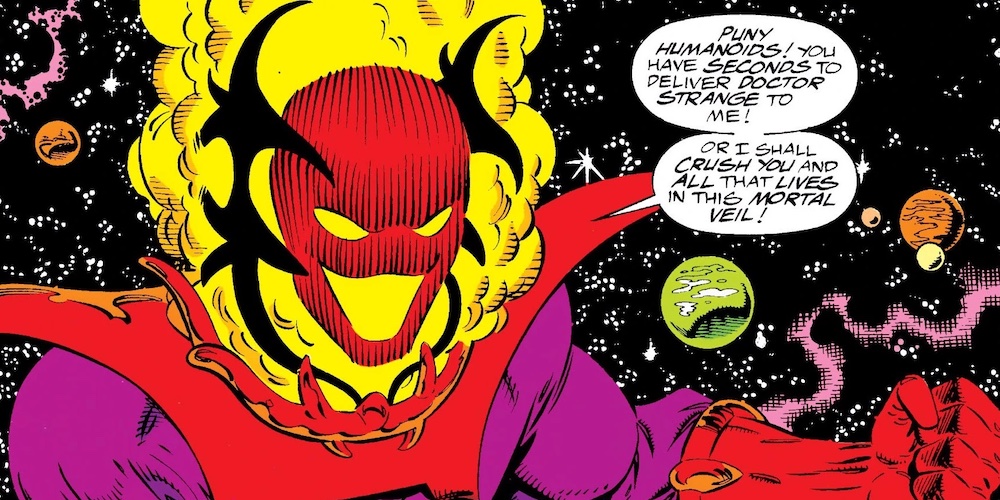 This left Dormammu and Umar to violently drive the Mindless Ones out of their new home dimension. They conveniently slaughtered all of Olnur’s defenders during this process, of course, and when the dust settled, Dormammu had claimed the throne for himself.

The Birth of Clea

King Olnar had an infant son left behind when he died. But because Prince Orini was so young, Dormammu and Umar allowed him to live. As he grew to adulthood, he was a loyal servant to Dormammu. He and Umar also hooked up, though Umar found the experience to be less than satisfactory. But in time, Umar became pregnant and gave birth to baby Clea.

The birth was difficult for Umar, and meant that she could no longer take her true form anymore. In anger, she lashed out at her brother and was banished to a pocket dimension before Clea even really knew her. Clea was raised by her father to worship Dormammu, though she didn’t know he was her uncle.  Don’t worry, Umar comes back. She becomes quite the sex-positive lady, and she and Clea hash out their history.

Though I’m not even gonna touch this panel from Marvel What If? #18… Courtesy of Marvel Comics

When Dormammu came a’knockin’ on Earth’s door, Doctor Strange went to the Dark Dimension determined to save the world. Clea watched on as he bravely sought Dormammu. Growing to admire the sorcerer, Clea tried to deter him from fighting with the dark creature. For this, she was banished to a pocket dimension, but Strange was able to free her. 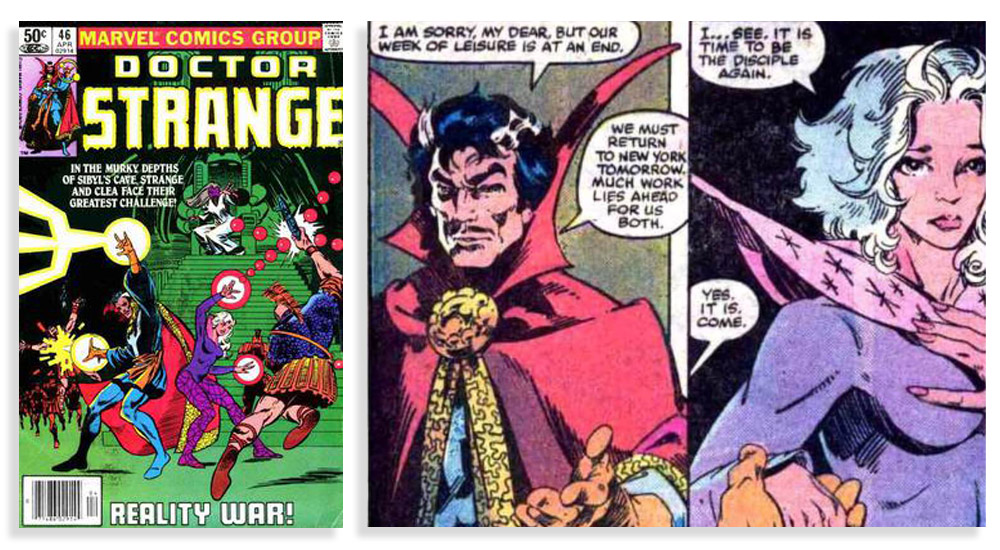 Eventually, Dormammu was unseated by another big-deal entity known as Eternity, leaving the dark dimension without a ruler. At this point, Umar was free and feeling like it was her turn to wear a crown, so she banished Clea to another dimension again, and Strange came to save her… again.

It became clear that the only safe place for Clea was on Earth. So Doctor Strange set her up with an apartment in New York, and soon she was learning magic as his disciple. Though her mystical Dark Dimension powers didn’t have the same kick on Earth, she was able to learn magic from Strange, who was now the Sorcerer Supreme. She fought alongside him in many of his adventures, and even ran with the Defenders for a while.

But as her and Stephen became closer, she received word that the Dark Dimension was without a ruler, and that its citizens wanted her to return and fill the spot. Believing that her feelings for Stephen was stronger than his feelings for her, she departed for home. 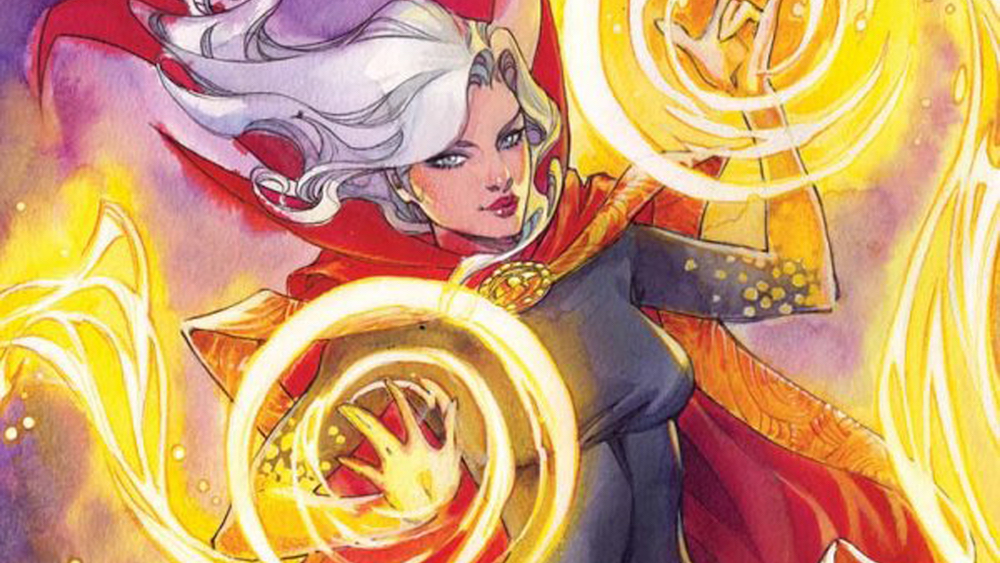 When she got back to the Dark Dimension, her first task was to overthrow Umar. It was only when the two went head-to-head that Clea discovered that Umar was her mother. With Stephen’s help, Clea bested Umar and banished both of her parents to a pocket dimension. Now the ruler of her own magical kingdom, Clea asked Stephen to stay with her. But he was pretty salty about her going her own way and leaving his discipleship, so he declined.

But these two dimension-crossed lovers would always be in each other’s orbit. Strange came around, and the two eventually married in their way. Because Clea was an extradimensional being, the two shared a ring and were mystically connected thereafter. 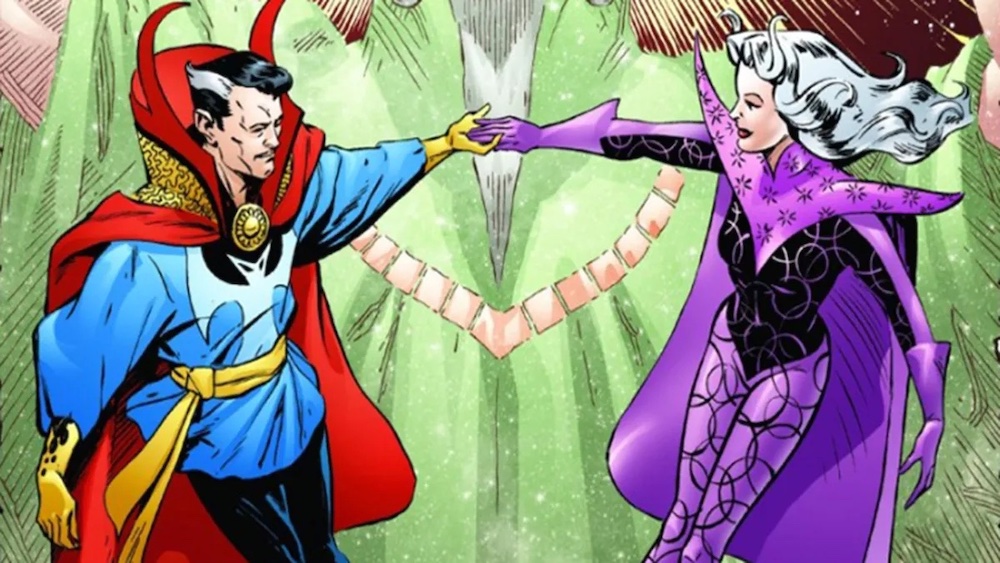 They didn’t have an easy go of it, though. Each one was almost always needed in their own dimension. This meant they had to spend most of their time apart, and any time Clea spent on Earth could result in Uncle Dormammu kicking down the door and making himself at home again. Over time, their romantic connection waned, but the two were still deeply bound as intimate friends.

The Death of Doctor Strange

Most recently in the comics, Doctor Strange was murdered. A temporal remnant of Stephen appeared to Clea, and together they helped to solve his murder. Afterward, he gave her the Eye of Agamotto and the Cloak of Levitation. Before his spirit departed, he passed the title of Sorcerer Supreme to Clea. She currently wields the title in the ongoing series. 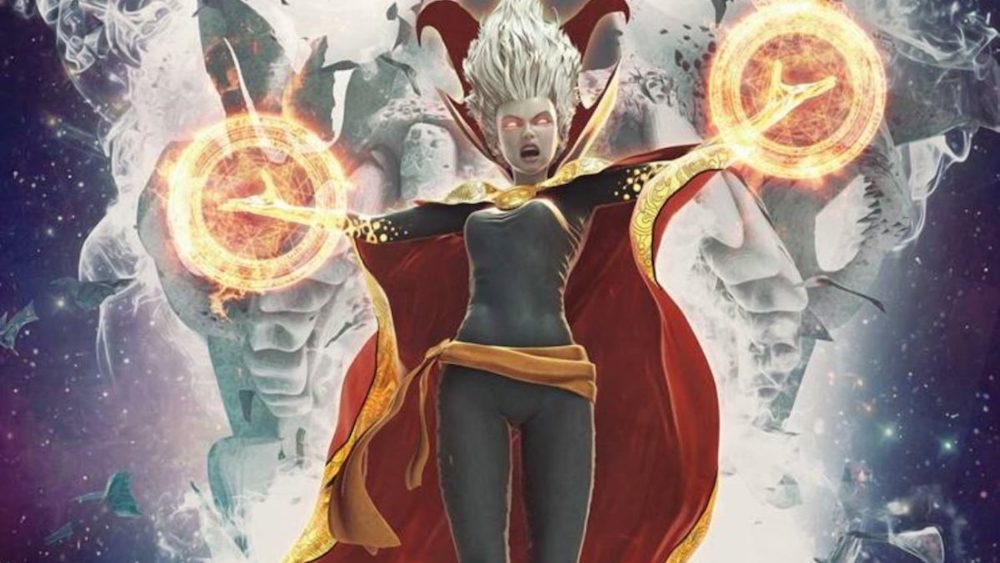 At the end of Doctor Strange in the Multiverse of Madness, the MCU introduced us to Charlize Theron’s on-screen version of Clea. She tells him that his multiverse-hopping shenanigans have caused an incursion, an event that causes two or more dimensions to crash into each other. Then, she tears a hole in reality to reveal the familiar Dark Dimension, and invites him to come along with her and help fix it. 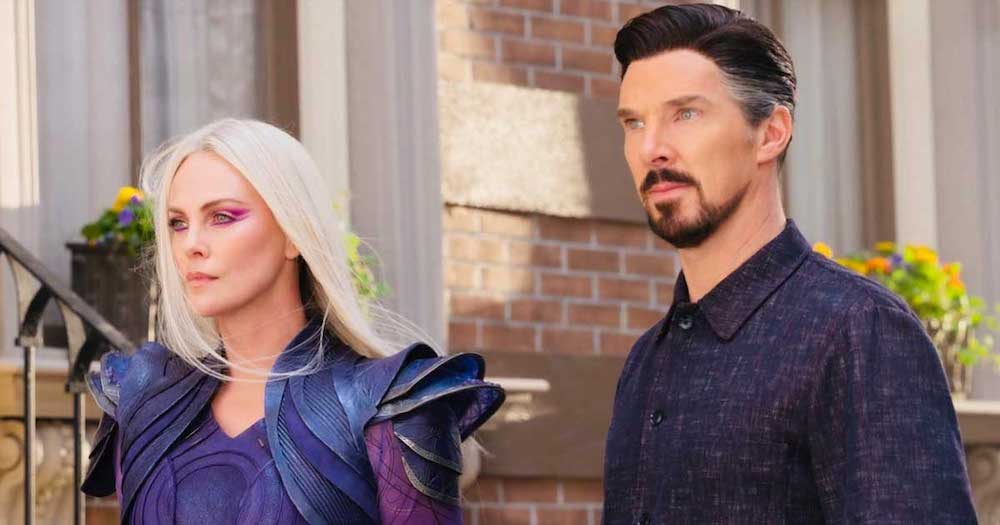 By the flames of the flawless Faltine! Where do you think we’ll see Clea next? 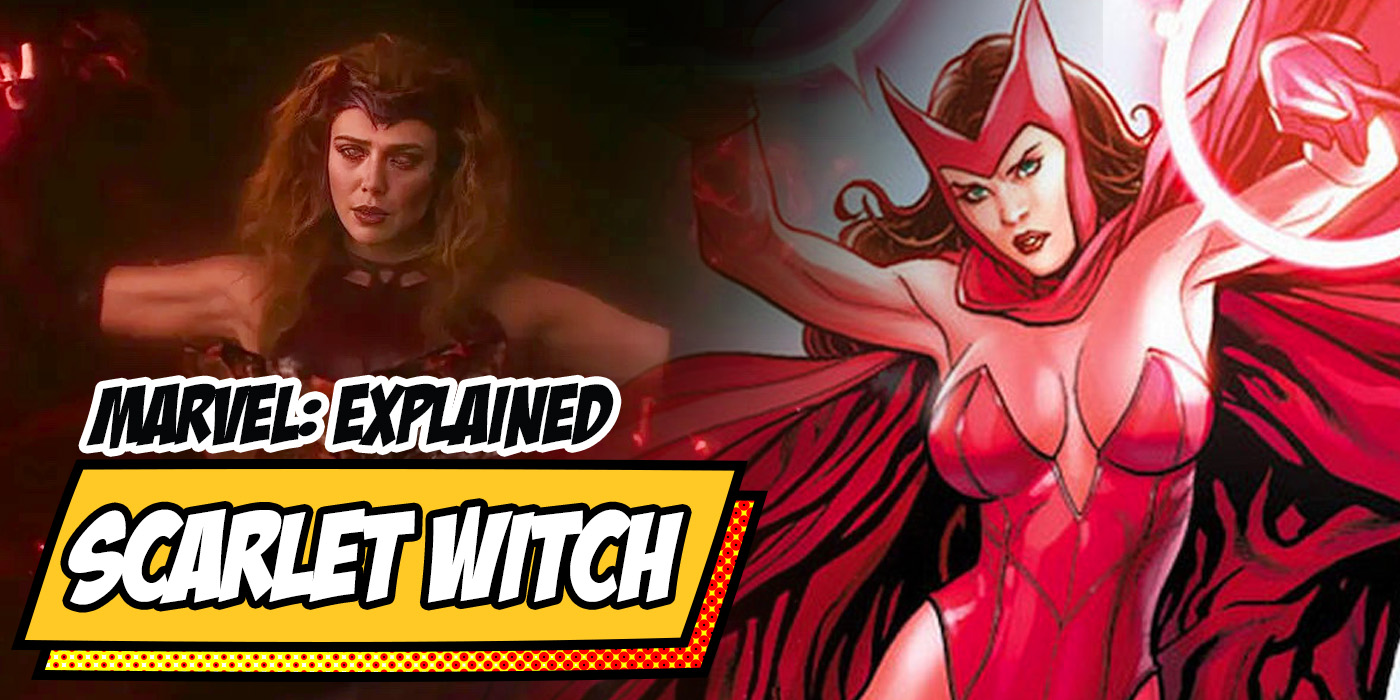