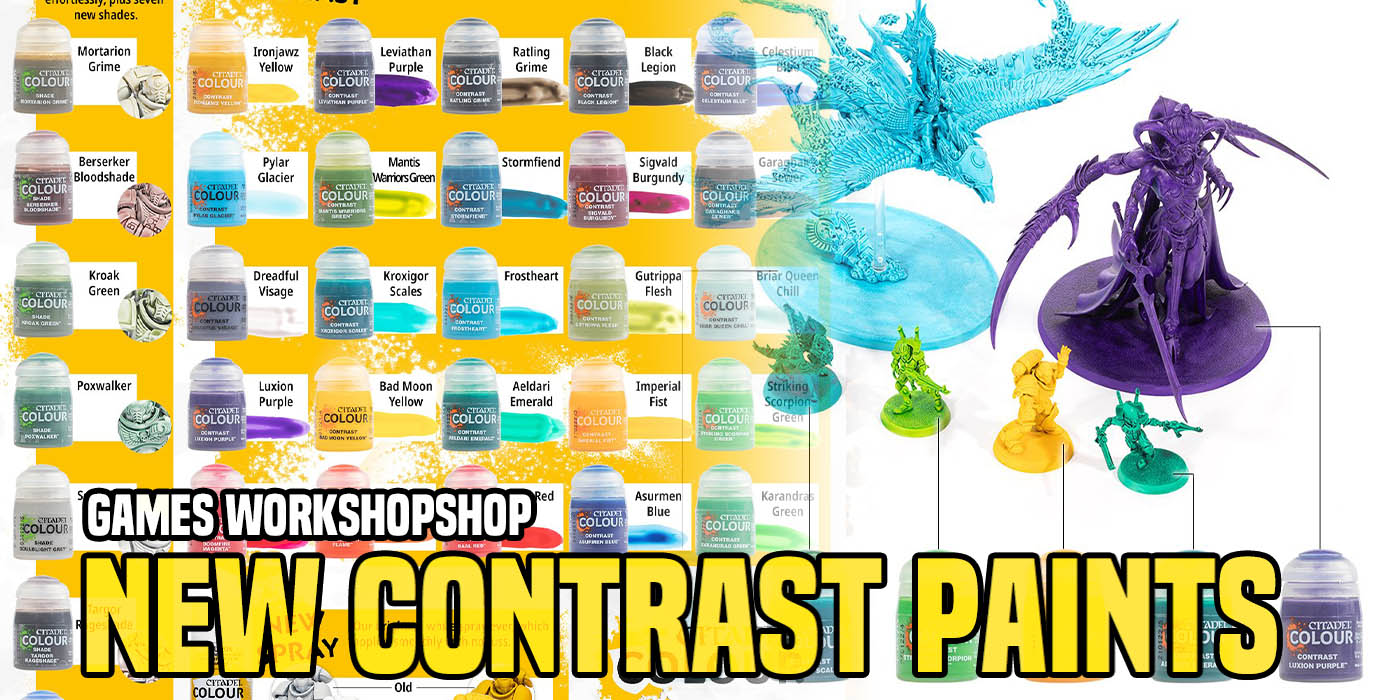 Games Workshop announced some changes to the Contrast Paint line up and a new formula for White Scars Primer. We want to give them a go!

When GW first introduced the Contrast Paint line they were a big help for hobbyists everywhere. In most cases, with the right primer and a basic coat of the contrast paint you could get really nice results! Now GW is adding more colors to the range and they’ve also reformulated White Scars Primer to have “the best coverage ever” — and we’re very curious to give them a run.

“It’s an incredibly exciting time to be a Warhammer hobbyist – the Citadel Colour range is expanding with 25 vivid and versatile new Contrast paints, the Shade range has been reformulated with a further seven new colours added, and a brand new bright white spray primer is coming! It’s a chromatic Christmas, and it’s still summer!” 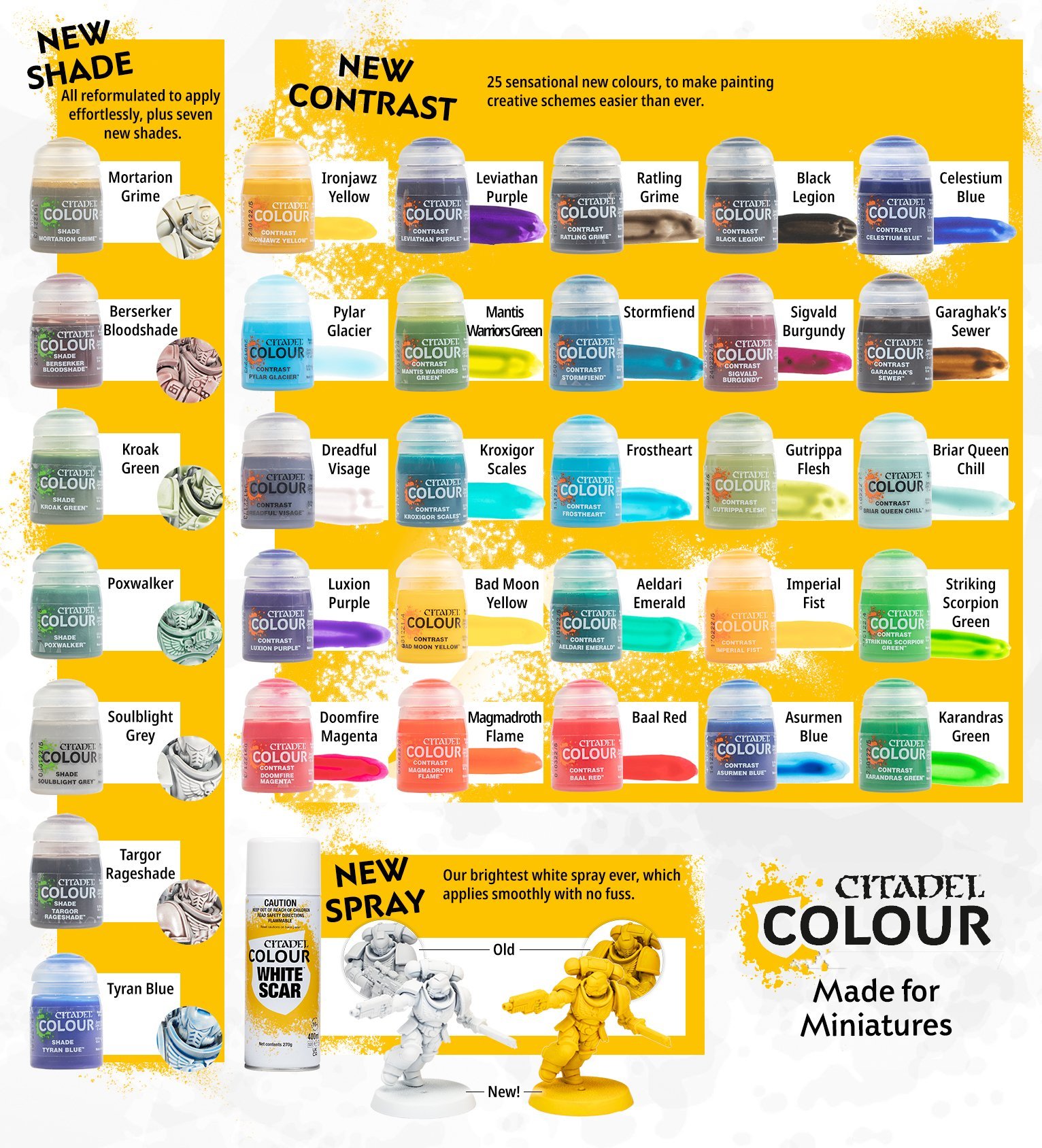 Now, while we DO want to try all the paints out there are a few we are legit curious about. For starters, we really want to give the new White Scar Primer a go. 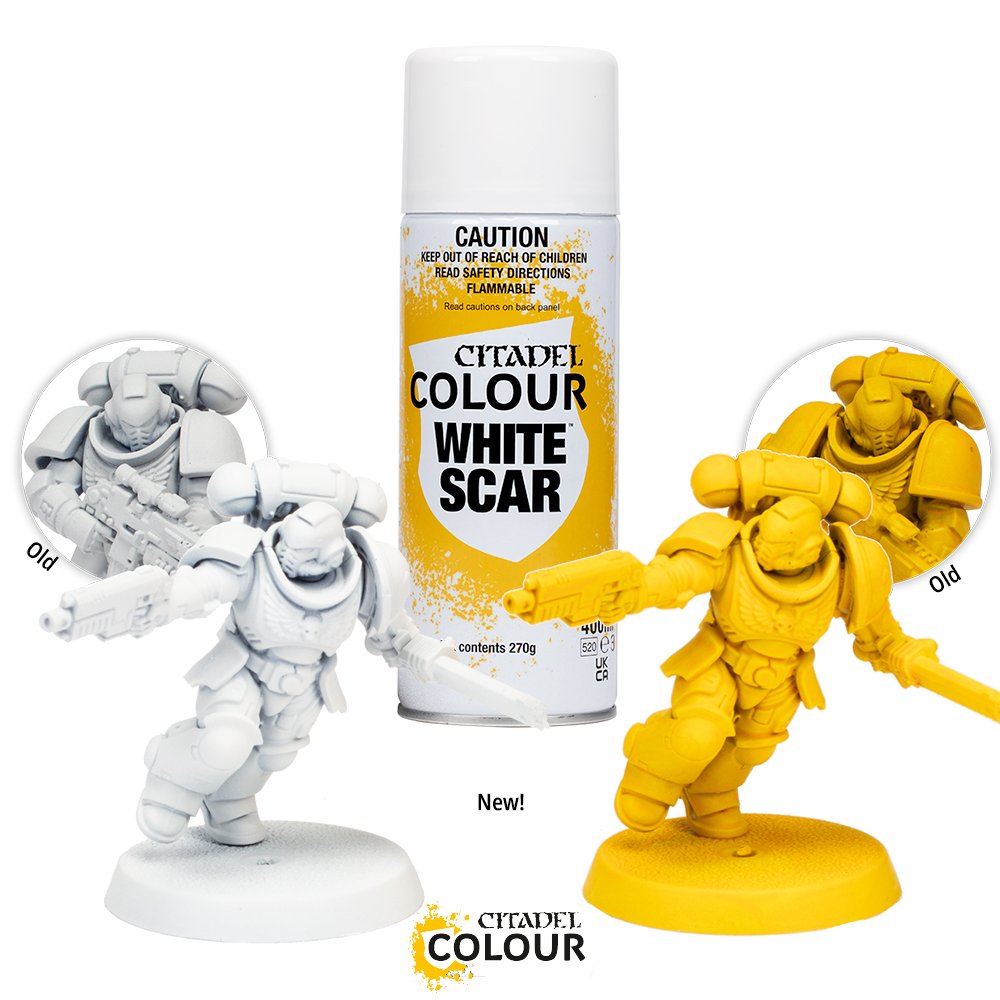 The previous version (which was Corax White) seemed to work fine for me. It was one of the few white primers I could get to do the job well in the climate I live in. This might be different for everyone depending on your local climate as I’ve had issues with temperature, humidity, and even dust in the air before. If you’ve ever tried to prime models in the Texas Summer and had bad results, then you know what I’m referring too.

While the Corax White Primer was expensive, the fact that I could get a reliable coat without losing any details was important to me and worth the money. I’m hoping the same is true for the new version.

According to GW this color should slot right in with their other yellows like Iyanden Yellow and Nazdreg Yellow. I’m personally also curious about the Contrast version of Imperial Fist Yellow.

As a color, Yellow is a tough one to crack. As someone who painted way too many Tyranids yellow I’ve had my own struggles with the tone and hues of yellow. Sometimes the paint would be too thin to get a good coat. And while pro-painters might recommend building up a good coat with multiple thin layers, when you’re painting a 100 gaunts, you really don’t want to spend the time. Contrast Yellows helped with this process by giving me my time back so I want to see how this new stuff works!

I’ve been impressed in the past with the coverage and look of the other Contrast Red paints. I also happen to have a bucket load of Blood Angels as well. Red is another one of those tough colors to get right. In the past, I’ve relied on a good base primer, then a good red spray paint. Then I’d go with a black wash and red touch-ups. If I can skip a few steps with a Baal Red Contrast paint and get the same (or better) results, I’ll be convinced!

Typically, I wouldn’t use a Black Contrast Paint over a white based primer. But I kind of want to give this one a shot. the picture looks like it works well. I’d also like to note that the final product does look different than the Black Templar’s Contrast paint. I’ve used that color quite a bit for various things but this new Black Legion looks a bit more…brown? It’s almost a “warmer” black as opposed to the more “cool” black of Black Templars and I want to try it out.

I’ll be 100% honest — I don’t know about this one. Maybe it’s the lighting or the coverage but I don’t think the photos of this paint are doing it justice: 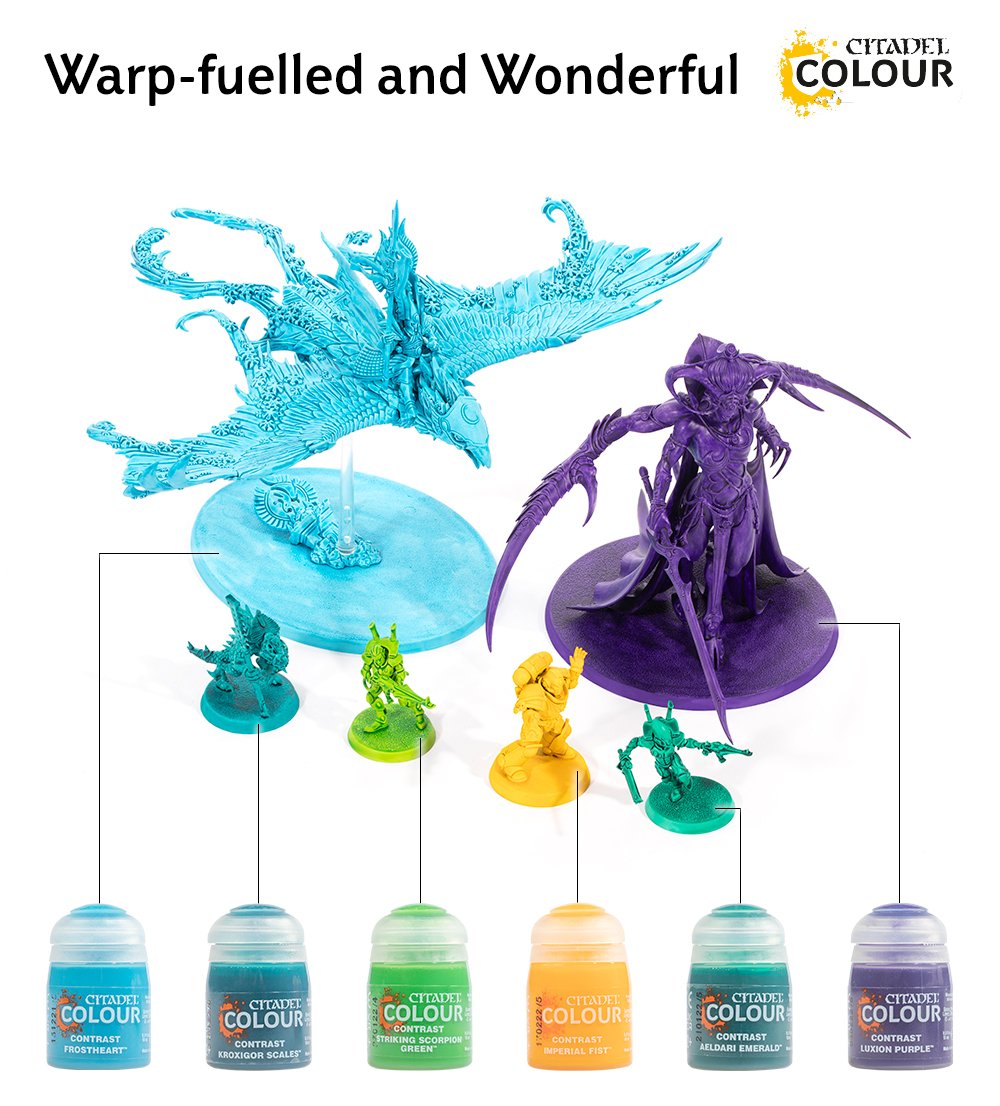 Contrast paints also seem to have a rougher time on BIG models and large surfaces. I’d be curious to see this one used on a smaller model — like a Genestealer for example. In anycase, this is one purple I’m curious to use.

This is another one of those colors I’m very curious to use. That icy-blue frost looks like it could be fun to work with. Honestly, it looks maybe a little too thin over white — but that could just be the picture. And hey, if you’re looking for a thinner blue for some of that line work this could be perfect. 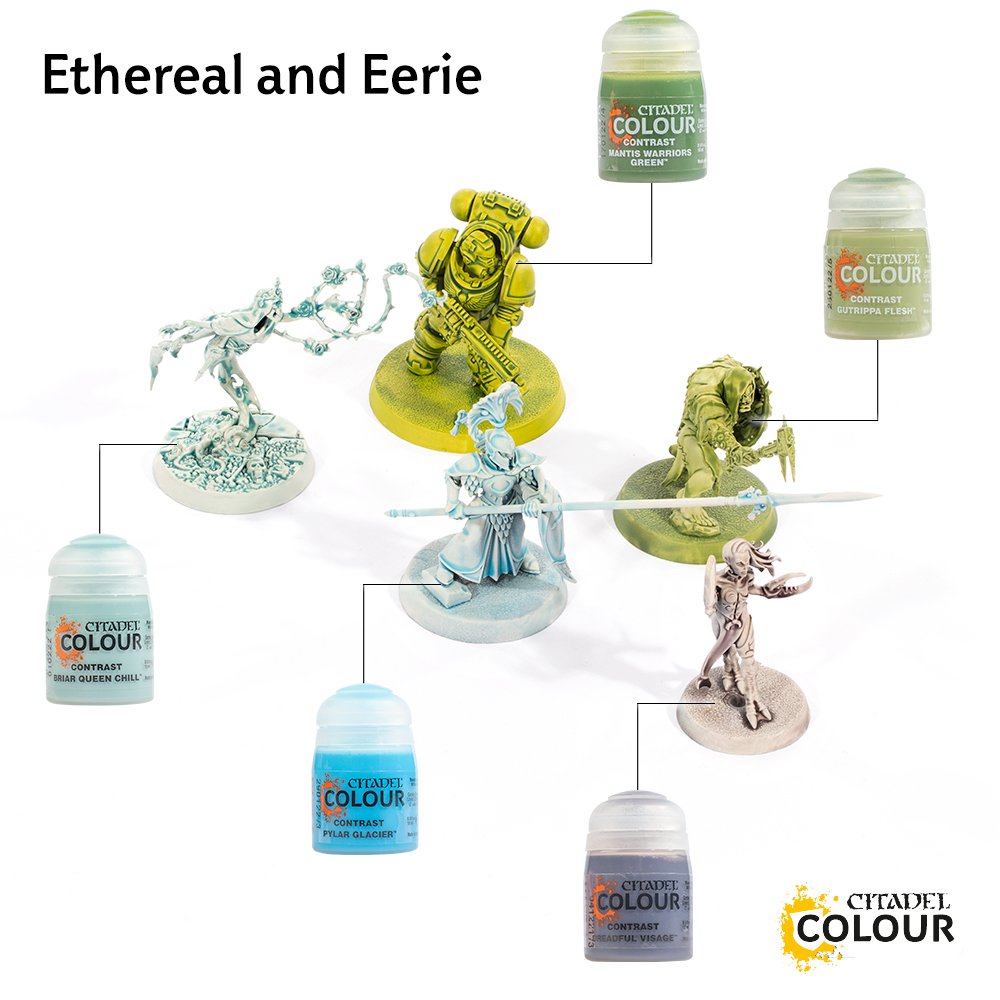 While I could keep going on the colors I want to try, the final one I’ll mention is the Briar Queen Chill. I’ve painted my fair share of Ghosts thanks to the Nighthaunt range. And while I (mostly) followed GW’s how to paint Spirit Hosts guide I’m interested to tweak the formula. If I can get something close and save myself a few steps (which translates to lots of time saved) I’m game for that!

There are a BUNCH of new paints on the way — which colors are you looking forward to using?

Author: Adam Harrison
Writer, Editor, Texas Native, and Austinite for 15+ years, Adam covers all things Tabletop Gaming. Which includes Warhammer 40,000, Age of Sigmar, D&D, Board Games and everything else that involves dice, boards, cards and a table. A hobbyist, player, and collector of miniatures and games, Adam's current obsession are his Death Armies for Age of Sigmar, his Blood Angels and Tyranids for 40k, and his ever growing Arkham Horror: The Card Game Collection.
Advertisement
Games Workshop Hobby Miniatures Painting
Advertisement

Necromunda: Design Your Own Vehicles In The Wasteland Workshop 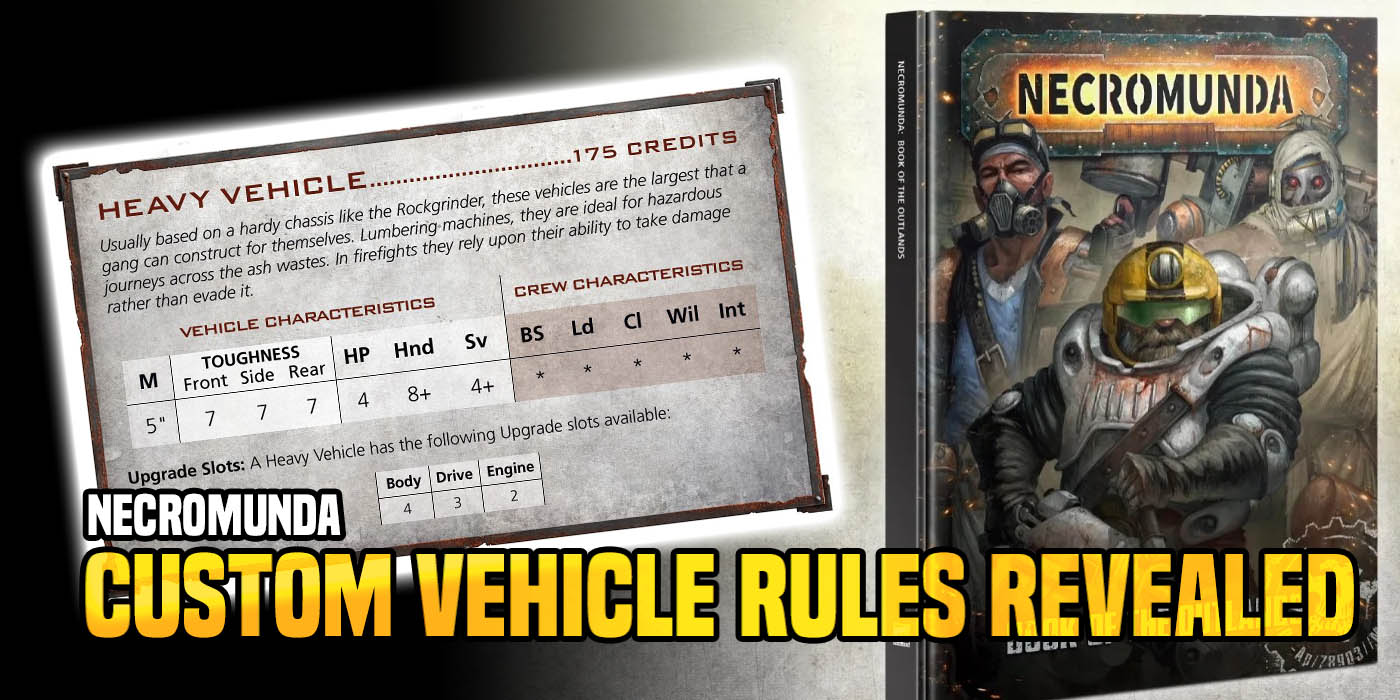