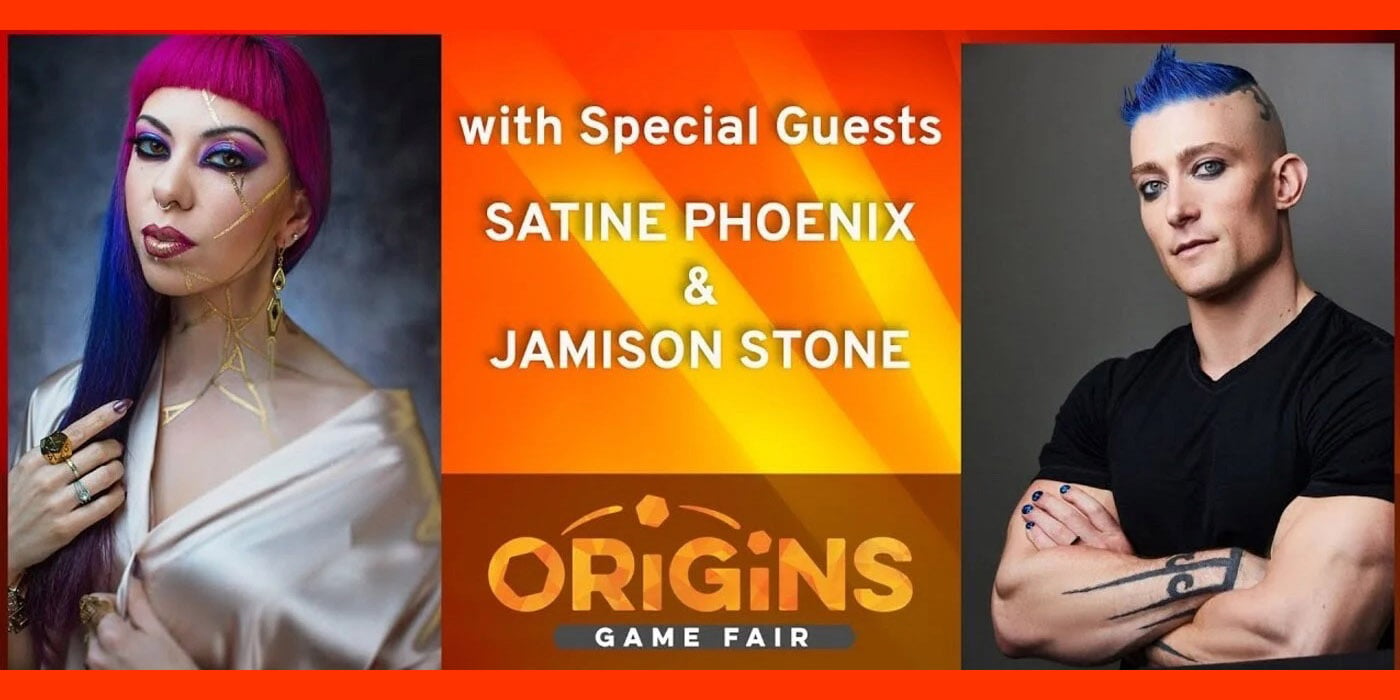 Origins Game Fair issued a statement in the wake of a series of allegations about two of their special guests, Satine Phoenix and Jamison Stone.

Over the past several days a number of writers, designers, and even tattoo artists have spoken out against mistreatment by two figures in the tabletop RPG community, Satine Phoenix and Jamison Stone. All of this culminated in Origins Game Fair issuing a statement and “proceeding with a modified schedule” with regards to events featuring Phoenix and Stone.

“During Origins, a situation regarding our Special Guests, Jamison Stone and Satine Phoenix developed. With attendee safety as our highest priority, staff assessed that there was no immediate risk of physical harm. We continued to closely monitor the situation and proceeded with a modified schedule.

Origins Game Fair does not condone abuse in any form and is committed to being a safe and inclusive festival for all.”

For context, Phoenix and Stone have together worked with some of the most well-known figures in the TTRPG community, including Critical Role’s Matt Mercer, Luke Gygax, and have appeared at special events (including Origins Game Fair). They’ve also launched successful projects of their own, including The Red Opera and Sirens: Battle of the Bards. 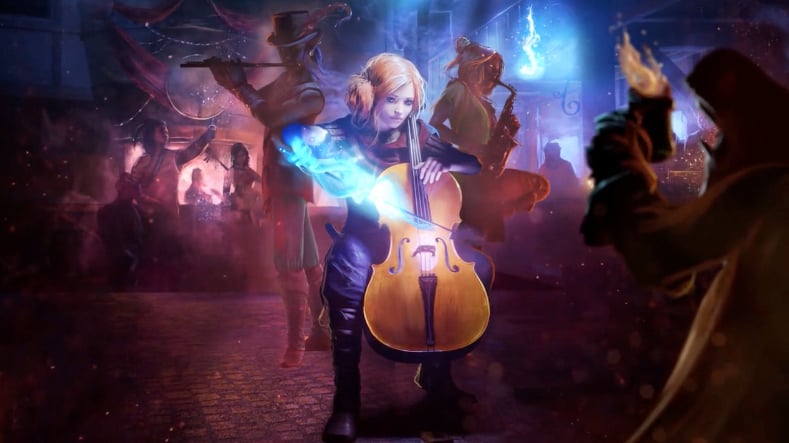 The allegations started on June 8th, after Chad Rowe, a tattoo artist perhaps best known for tattooing Post Malone, spoke out about his experience with Phoenix and Stone.

It was never my intention to release this experience because I did not want to make my footprint in this industry this way. But in light of two dangerous people threatening and slandering some of my closest friends . It’s time I share my experience… a thread … pic.twitter.com/DvOhp8yBnh

In a Twitter thread, Rowe outlined his experience with Stone and Phoenix when he was contracted to tattoo the pair. You can read the full thread above, but as Rowe explains, during the process, he was mistreated by the couple. Discussing a contract, he was “insulted, berated, and talked down to as if I was a lesser person.”

…During the process of tattooing Jamison, I mentioned that I could no longer do the tattoos I did on a celebrity after signing a contract to release the rights to their tattoos. This interested Jamison and he asked to see the contract – it was a casual passing conversation… pic.twitter.com/0XlYRgtPcm

Here’s an excerpt from Stone:

Hear this; if you want people to treat you like an adult and/or professional, you need to act like one. You have yet to do this. And your carelessness only continues to disappoint me and make the situation worse for yourself. I’m done [interacting] with you […] The only way I can see you salvaging the situation for yourself, both personally and professionally is to write me (and Satine if you so choose) a genuine letter of apology, taking responsibility for yourself and your actions. If you decide to do this, I expect it to be through the post, not email. You have my address. 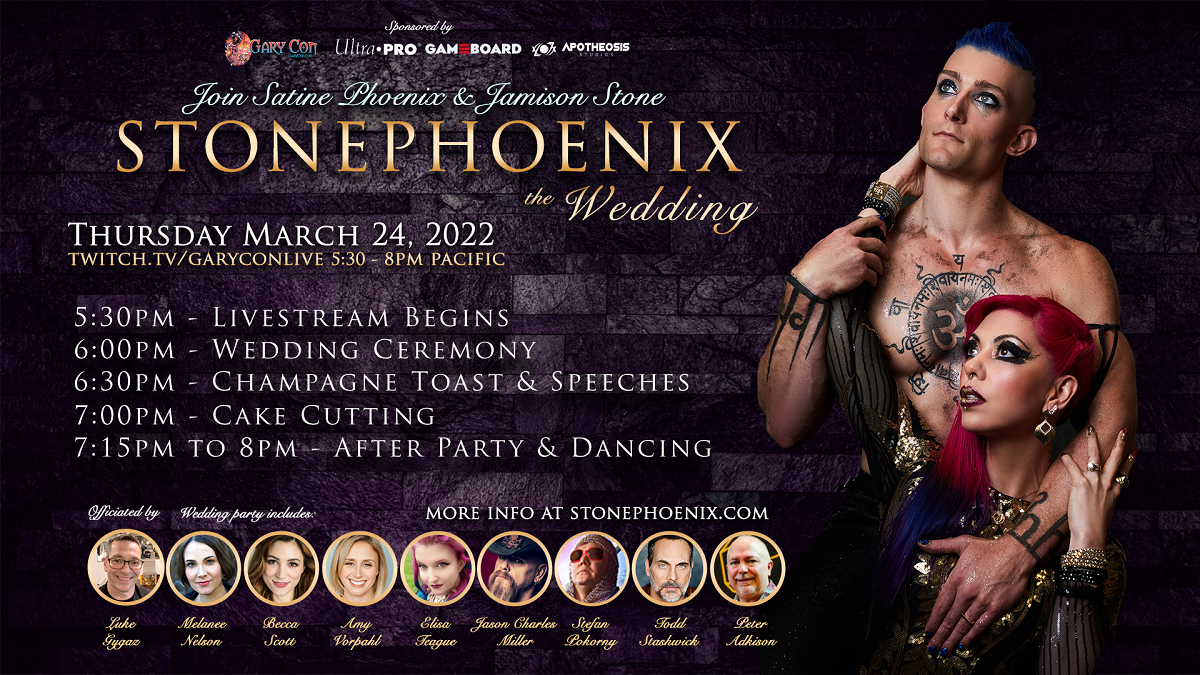 But Rowe’s story was only one of many that came up over the course of the past few days. Creatives from different disciplines in and around the TTRPG scene came forward, speaking up about mistreatment, bullying, lack of payment, and more from Stone and Phoenix.

I believe every word of Chad’s post. This is nearly identical to my own experience. It was the most awful working environment. Jamison Stone repeatedly threatened & berated myself and other freelancers. I had never felt more taken advantage of in my life. https://t.co/O8T0OnQq1A

And from Jessica Marcrum, another of the writers on the project:

Chad’s not the only one. Jamison gaslit and bullied us on Sirens: Battle of the Bards for asking to be paid after we were told to invoice by one of the other project leads (Rick Heinz). We eventually were paid…most of us less than we initially invoiced for, but it’s done. https://t.co/pIJOs6nkQr pic.twitter.com/57DqA9Y3XX

In these two threads, Edwards and Marcrum outline Phoenix and Stone’s behavior towards their contractors. Gaslighting, bullying, and ultimately getting paid less than agreed upon. Along with the public humiliation of ending up on a “black list” for “behavior.” And “behavior” here, as Marcrum clarifies, is simply asking to be paid what was owed, as you can see in this segment of the thread:

Immediately following this conversation, Kage and I were put on a “black list” available for the entire team to see. It’s at the bottom of the writing tracker. Jamison spelled my name wrong, so maybe I’ll get hired again someday, lol. pic.twitter.com/AzwNJ5Jhgm

From around the ttrpg community stories emerged. Time and again, the pattern was the same. Phoenix and Stone used the power they had to bully other creators. Mistreatment, verbal abuse, even threats to people who were employing the pair:

K: That’s when Jamison reminded us that he and Satine could “ruin anyone we wanted to with a single tweet” and that it was “a bad idea to be on their wrong side”, heavily insinuating that our ideas about entering the TTRPG space or streaming were hanging in the balance.

This comes from Tristan and Katie who hired the pair as guests for a livestream of PAX West. They detail mistreatment at the hands of the pair, including being lectured for drinking more than one glass of wine, getting berated for mishandling a suitcase, and being relegated from employer to assistant.

From the thread above, Stone and Phoenix were aware of their imprint on the space. They knew they could “ruin anyone [they] wanted with a single tweet.”

The stories go back years, across a variety of projects:

This is a story about retaliation, & repeating patterns of behavior. ⁰Patterns of behavior that parallel, yet pre-date Jamison. ⁰I hope it helps others avoid this kind of creative predation.⁰My story is both shorter and much longer than most folks who’ve spoken up. /1

The above thread comes from Liisa Lee who outlines her experience with Phoenix going back to 2016 when she was approached to work on Maze Arcana. Even in 2017, Lee faced gaslighting and similar behavior, all part of “patterns of predation” as she puts it. It culminated for Lee in the actual live/livestreamed event:

At the finale, on the final day, she needlessly gets in my way, making a small scene of aggressively putting her leg out to block my path. It’s petty. A ridiculous show.⁰ A kind gent sees her catty move and escorts her away.⁰ I remain polite & gracious. I’m made aware /51

Here’s another story from Ray Jenkins

In the end, it felt like we were being told we should be THANKFUL for the opportunity to work with a “D&D Luminary” and Apotheosis. As if they were doing us incredible favors by hiring us. /5

Time and again you’ll find people coming forward, and the same pattern of bullying and gaslighting appears, from both Stone and Phoenix. BoLS spoke with an anonymous but credible source attending Satinequest, a D&D Cruise featuring the pair. Our source confirmed that they had witnessed abuse firsthand, and that they had seen Stone mistreat Phoenix as well.

As a company, our goal is and always has been to create unique content and storylines for role playing and tabletop games that allow for a safe and respectful gaming environment. Due to the issues that have come to light Jamison Stone has resigned as CEO effective immediately. We will not tolerate Jamison’s actions within our company, or with the contractors and consultants we work with.

The executive team at Apotheosis Studios are discussing the matter internally and will update you with an official statement and decision of company matters as soon as we can.

Alongside Stone stepping down as CEO, other AS employees have quit. On the Kickstarter Pages for Sirens: Battle of the Bards, backers have been expressing their dismay and calling for Phoenix to be removed from the cover. 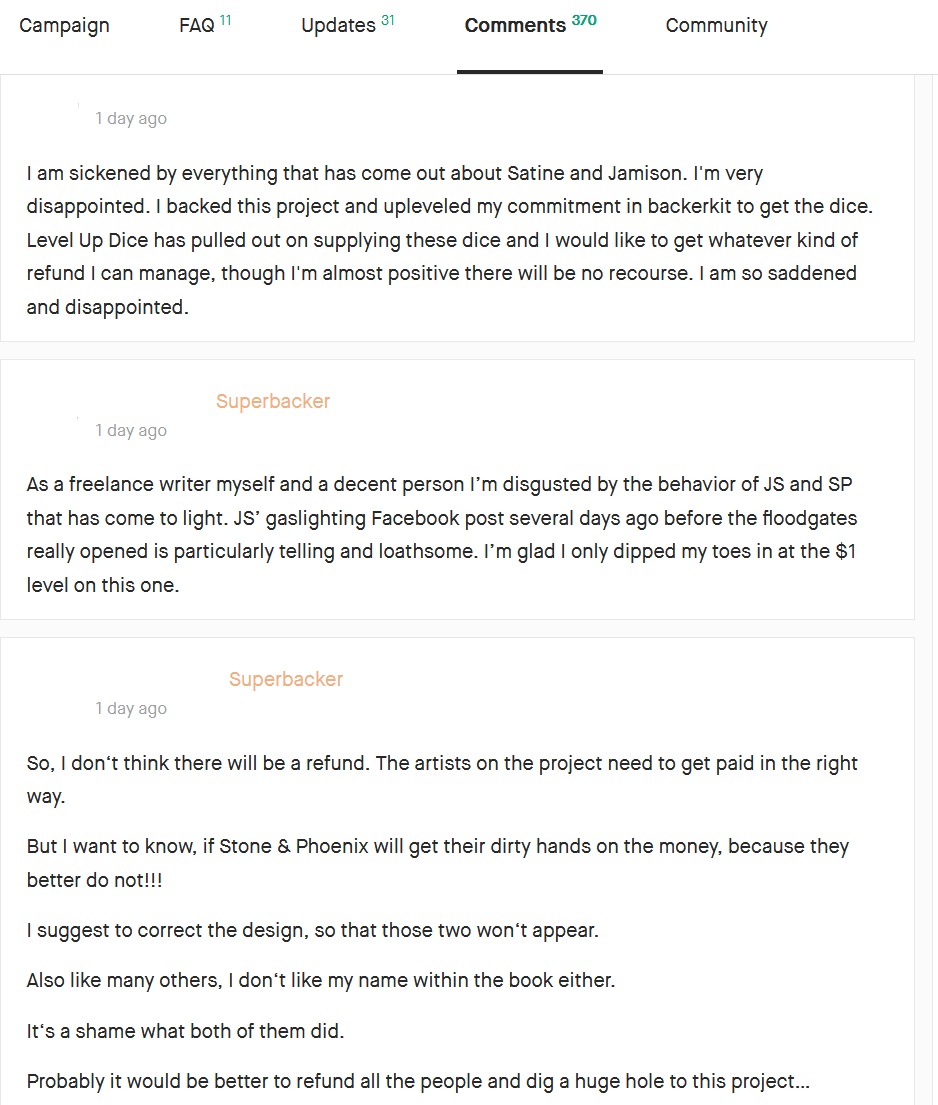 A few major tabletop figures have come forward with statements about this behavior. Origins Game Fair issued their “safety update.” Travis McElroy, of the McElroy family made a statement.

Every aspect of Jamison and Satine’s behavior detailed in these stories is antithetical to the way I and my family believe people should be treated, both within the TTRPG community, and in everyday life. We will not be associating with them again in the future.

To everyone brave enough to share your experiences: I am so incredibly sorry. pic.twitter.com/m3RxYFMd6M

Though, per another anonymous source, leaking a screenshot from a private channel (and reposted here with permission), part of the apology strategy seems to be focused around shifting the blame.

Also leaked to me from a private channel, some insight into Jamison and Satine’s PR strategy:

“I also am ensuring behind the scenes … we shield Satine as much as physically possible from damage.”

Meanwhile other events, like D&D In A Castle, have removed the pair as guests from their upcoming events. And Jasper’s Game Day, a tabletop organization dedicated to suicide prevention, has stated they will no longer work with Phoenix or Stone:

Their behavior has no place in our community and violates the JGD code of conduct. Effective immediately Satine has been removed from our advisory panel and JGD will no longer work with Satine Phoenix, Jamison Stone, Apotheosis Studios, Gilding Light or any other entity they lead

It is a reminder of how small the tabletop RPG industry is. It’s an industry that still runs on reputation. As Phoenix and Stone were keenly aware, a single tweet can carry a ton of weight. That so many felt the need to keep quiet for fear of a career in an industry that quite often underpays its creators in the first place, is a testament to how fragile the industry can be.

The tabletop industry is no stranger to figures abusing their power, it seems an all-too-common theme for anyone in the entertainment industry. Too many people have been hurt by behavior just like this. And sadly, it isn’t a one-time incident. As Phoenix and Stone have shown, often this kind of behavior goes on for years before it gets bad enough to bubble to the surface. In the meantime, how many have been harmed or driven away from a career doing what they love out of fear?

Thankfully, this time, many have spoken out to try and change things for the better.

Hopefully, in light of these statements, those affected can find a way forward with the support of the tabletop community.

MTG Spoilers - The Dragons Of Beadle & Grimm's Here Be Dragons 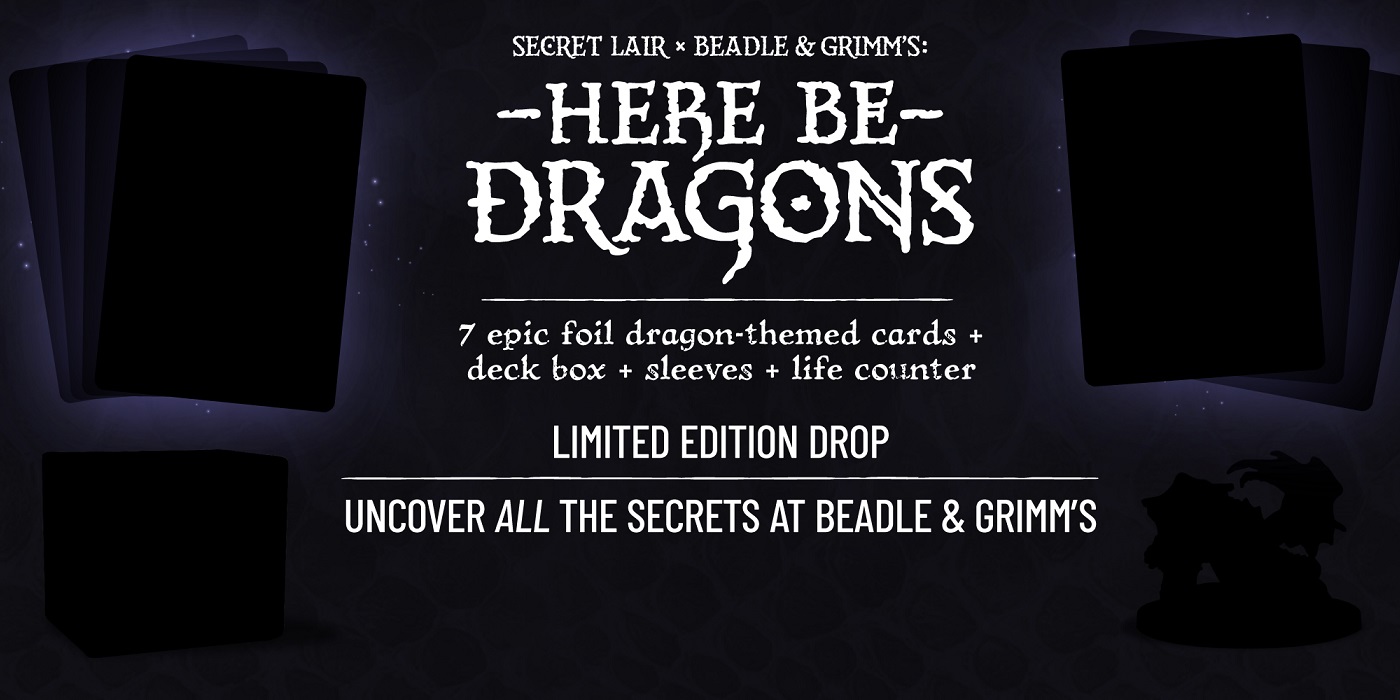