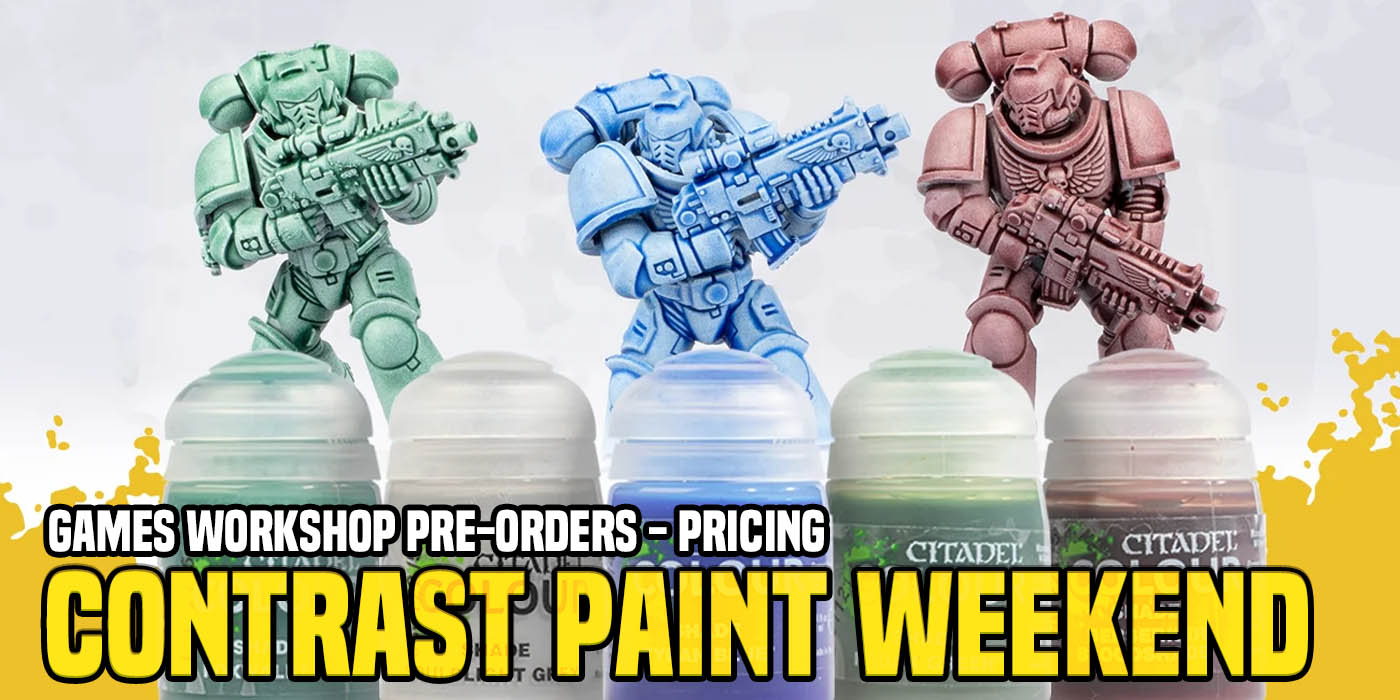 Get ready for a whole new batch of Contrast to experiment with plus a new Primer! 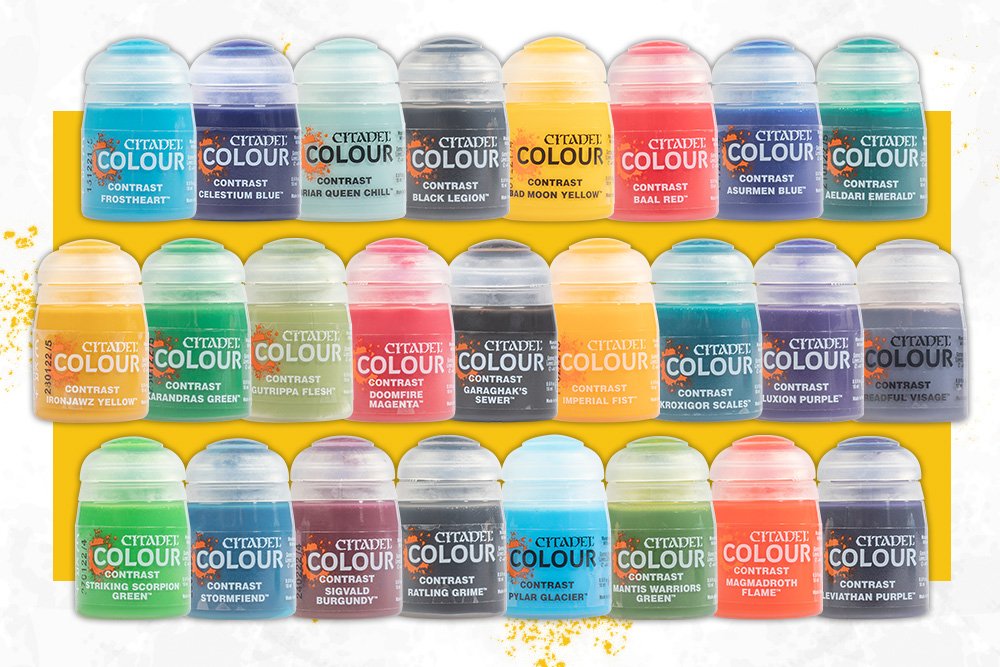 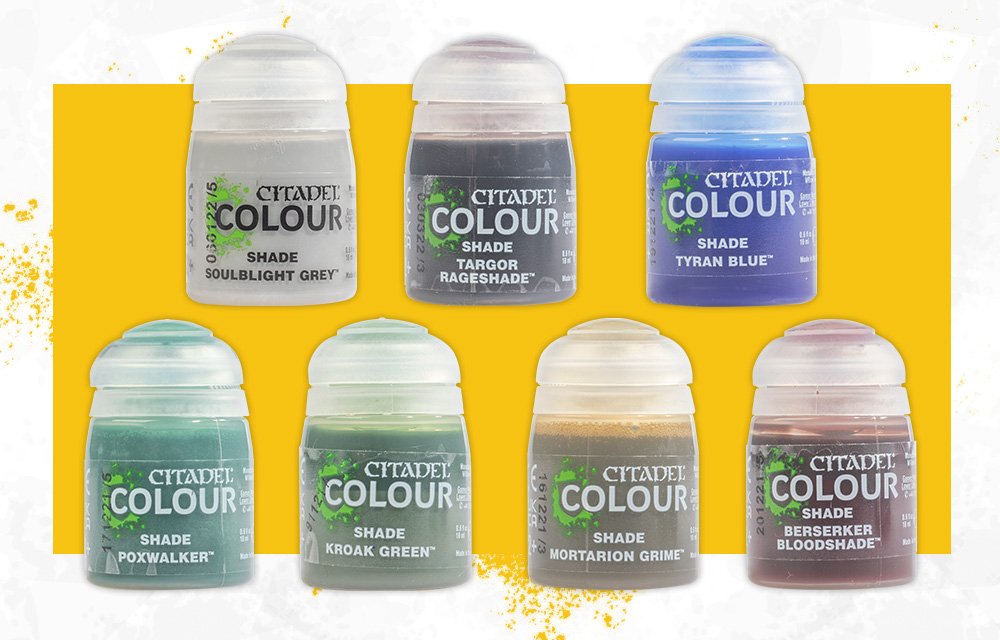 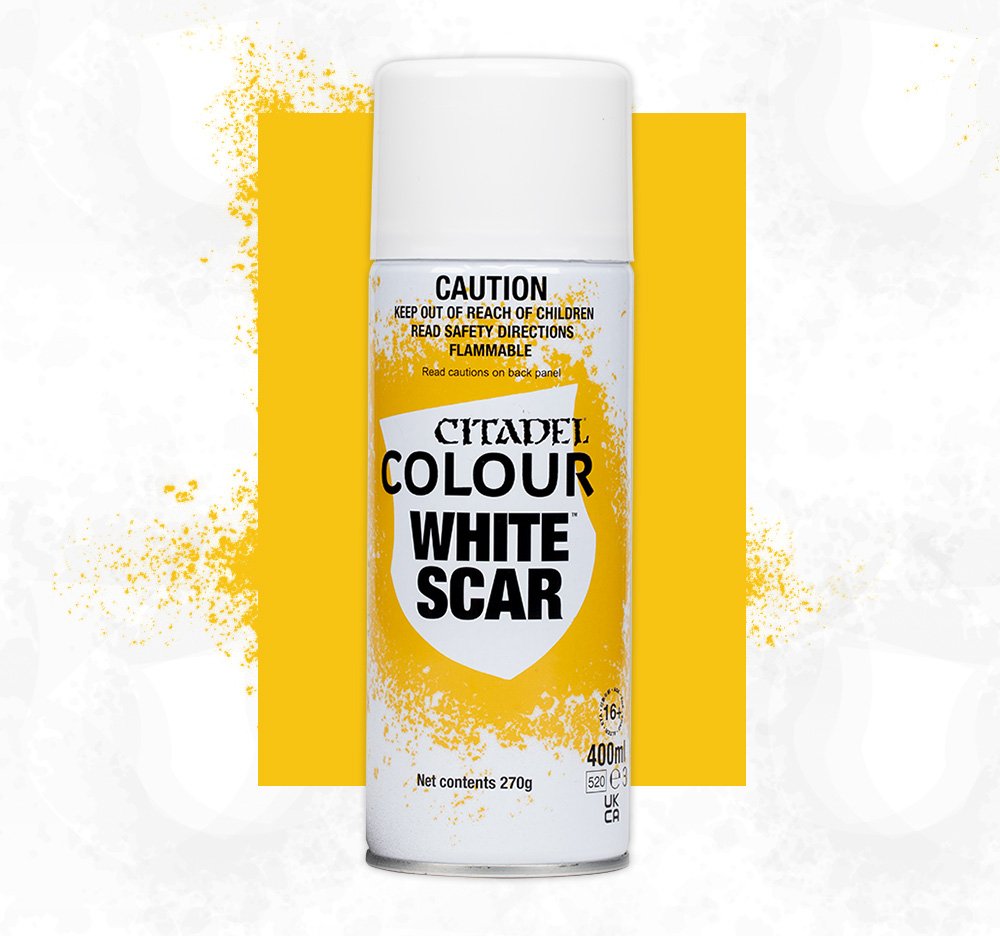 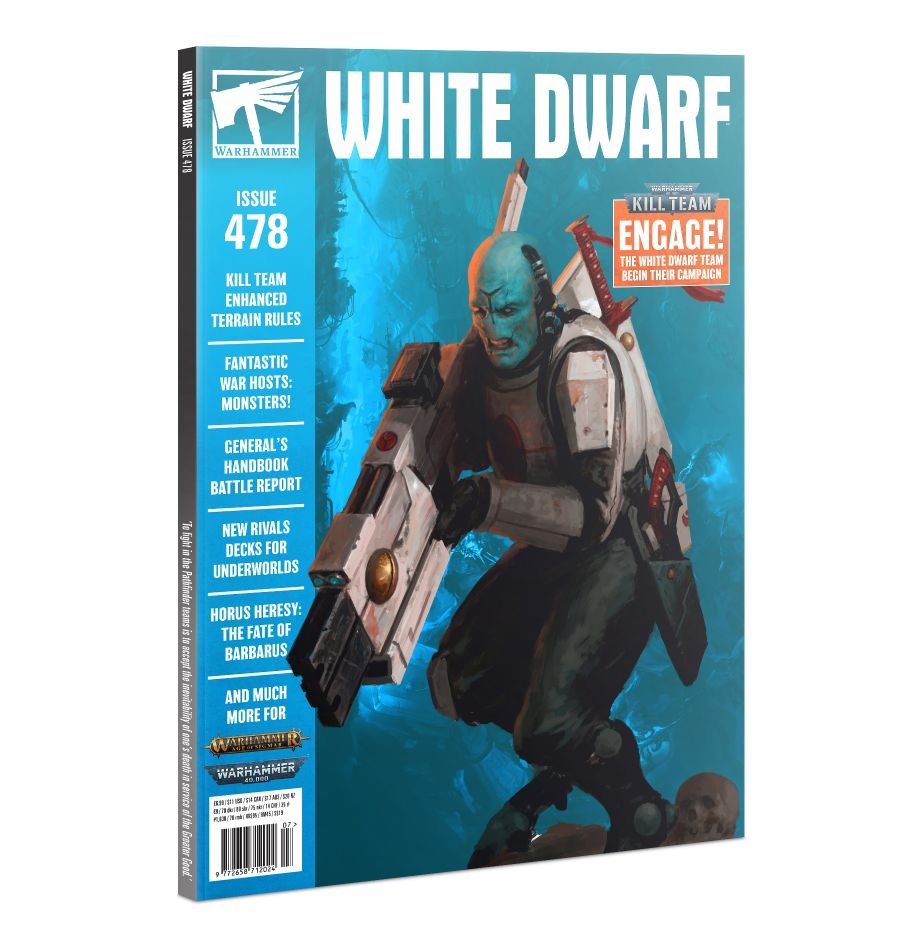 Here’s what you can look forward to in the July issue:

Inside the Studio
We talk about some of the models we’ve painted and the games we’ve played over the last month.

WARHAMMER 40,000
Echoes from the Warp
Following the release of the latest Chapter Approved, Warlord Supreme, Robin Cruddace, discusses the future of battle in the much-fought-over War Zone Nephilim.

WARHAMMER: THE HORUS HERESY
The Passage of the Angel of Death
In the wake of the Warmaster’s treachery, Lion El’Jonson brings vengeance to the southern reaches of the galaxy. This timeline details all the main events of the I Legion’s exploits.

The Fate of Barbarus
In the first part of a limited-run series, six Captains of the Legiones Astartes embark on a mission to build and paint armies in preparation for the invasion of the Death Guard’s toxic home world.

The Age of Darkness
A readers’ gallery of beautifully painted miniatures from the Horus Heresy. This section includes Loyalists and Traitors in equal abundance.

WARHAMMER AGE OF SIGMAR
Rules of Engagement
Following the release of the General’s Handbook, find out who these Galletian Veterans are, why they’re so important in pitched battles, and what a Bounty Hunters core battalion can do for you. Louis Aguilar explains all.

The Dead Fires of Shyish
In an attempt to quell the bestial spirits running rampant across Shyish, Nagash seeks to weaponise the souls of the fallen against them.

Fate of the Forge-fires
Awlrach the Drowner leads a procession of Nighthaunt to conquer the lands of the Ulrung Fyreslayers in this mini-campaign, which includes a unique battleplan.

Battle Report: The Prize of Gallet
Sam Pearson’s Blades of Khorne take on Matthew Rose’s Flesh-eater Courts as they come to blows in this matched play game, which showcases some of the savage new rules found in the General’s Handbook 2022.

WARHAMMER AGE OF SIGMAR – FLASHPOINT CLASH
Fantastic War Hosts: Beasts and Monsters
Warning! Big beasties are on the loose in this huge modelling and painting article all about monsters. Rawr!

KILL TEAM
Operation Briefing
Top Op Elliot Hamer joins us to talk about his favourite operatives from the first year of Kill Team.

Kill Team Engage!
Five members of the White Dwarf team embark on a Kill Team campaign. But who will escalate hostilities, and who will be digging holes with their trench shovels?

Creating a Killzone
New rules and inspiration for creating your very own evocative skirmish battlefields. We suggest hiding behind volatile fuel barrels. You’ll find 16 new Terrain Traits for use in Kill Team games, along with examples demonstrating how to apply Terrain Traits to various pieces.

The Depths of Duty
The Death Korps of Krieg take on a bunch of filthy heretics in this explosive short story.

WARHAMMER UNDERWORLDS
Glory Points
John Bracken returns from Harrowdeep with two new Rivals Decks that can be used by any warband – Vainglorious Raiders and Patient Lurkers.

MIDDLE-EARTH™ STRATEGY BATTLE GAME
Sinister Structures
Architect of renown, Ashley Hamstead-Reid, joins us to talk about building (and demolishing) the ruins of Dol Guldur in this impressive scenery article.

BLACK LIBRARY
A Taste of Lightning – Adrian Tchaikovsky
Krult Lardihands has been offered the feast of a lifetime. All he has to do to get it is liberate a fortress and kill a load of crunchy skeletons. Easy, right? 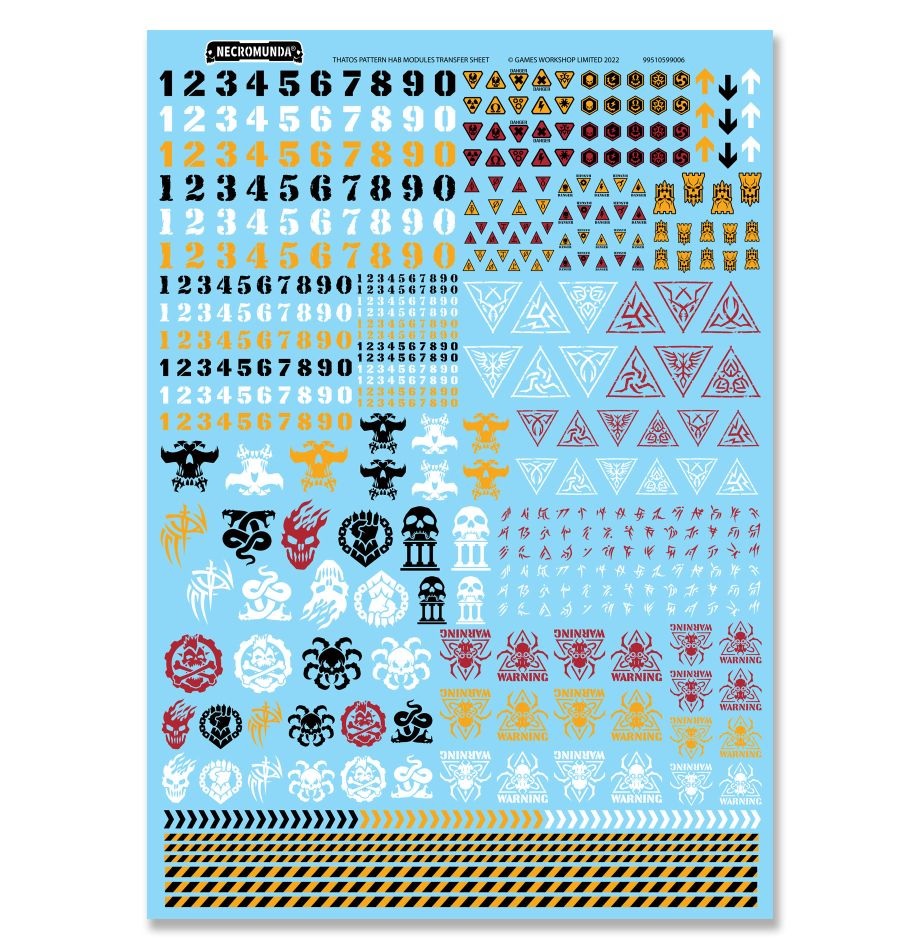 The ash wastes of Necromunda are an unforgiving environment, utterly deadly for those who can’t take shelter from the toxic storms and rabid fauna. Gangs that operate in the wastes claim whatever shelter they can, and adorn their rugged hideaways with graffiti to suit their needs. Give your Thatos Pattern Hab Modules that lived-in look with gang icons, signage, and a huge variety of markings.

This A4-sized transfer sheet contains 512 individual high-quality, full-colour waterslide transfers – including ash waste warnings, gang icons, numerical codes, ancient scriptures, and a variety of miscellaneous decals and markings – plus 58 chevrons in three different colours. These transfers allow you to easily customise your miniatures with detailed imagery, and are more than enough to cover a robust ash wastes settlement – or decorate the depths of the underhive.

Bring on the contrast paints!

Author: Adam Harrison
Writer, Editor, Texas Native, and Austinite for 15+ years, Adam covers all things Tabletop Gaming. Which includes Warhammer 40,000, Age of Sigmar, D&D, Board Games and everything else that involves dice, boards, cards and a table. A hobbyist, player, and collector of miniatures and games, Adam's current obsession are his Death Armies for Age of Sigmar, his Blood Angels and Tyranids for 40k, and his ever growing Arkham Horror: The Card Game Collection.
Advertisement
Games Workshop Gaming Accessories Hobby Miniatures Warhammer 40k
Advertisement 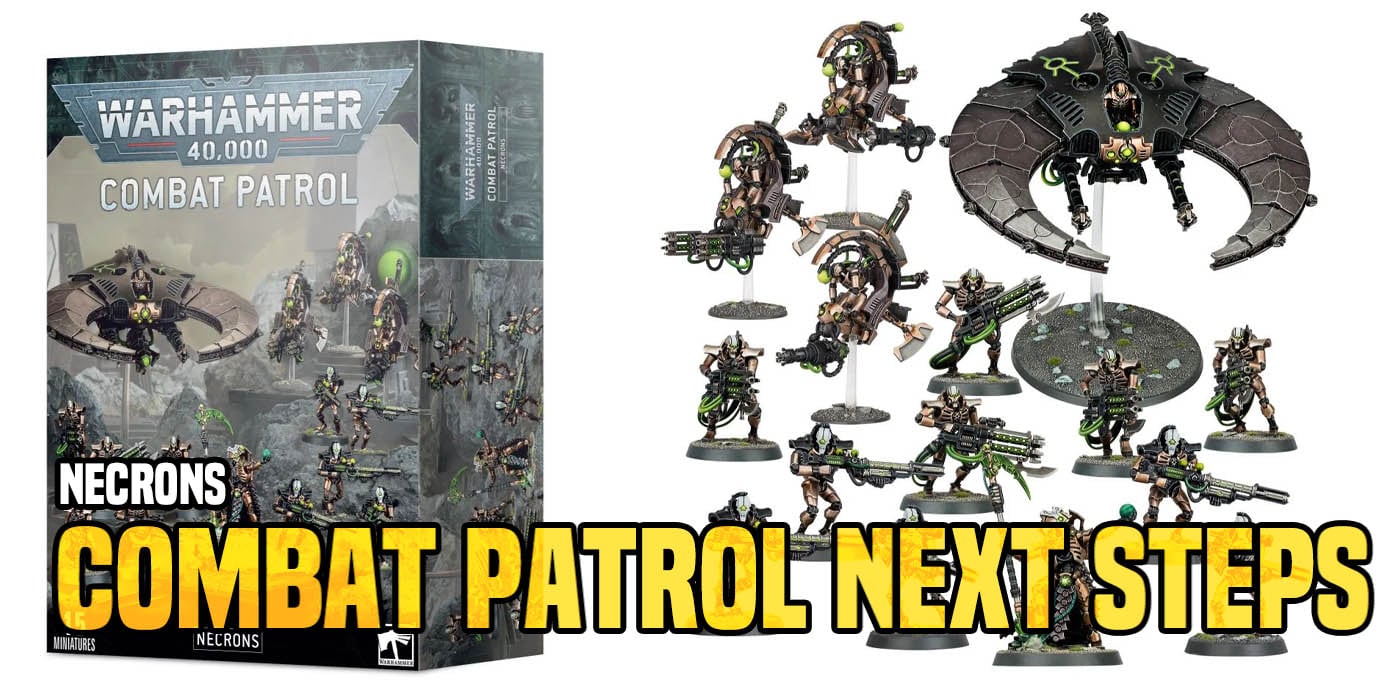