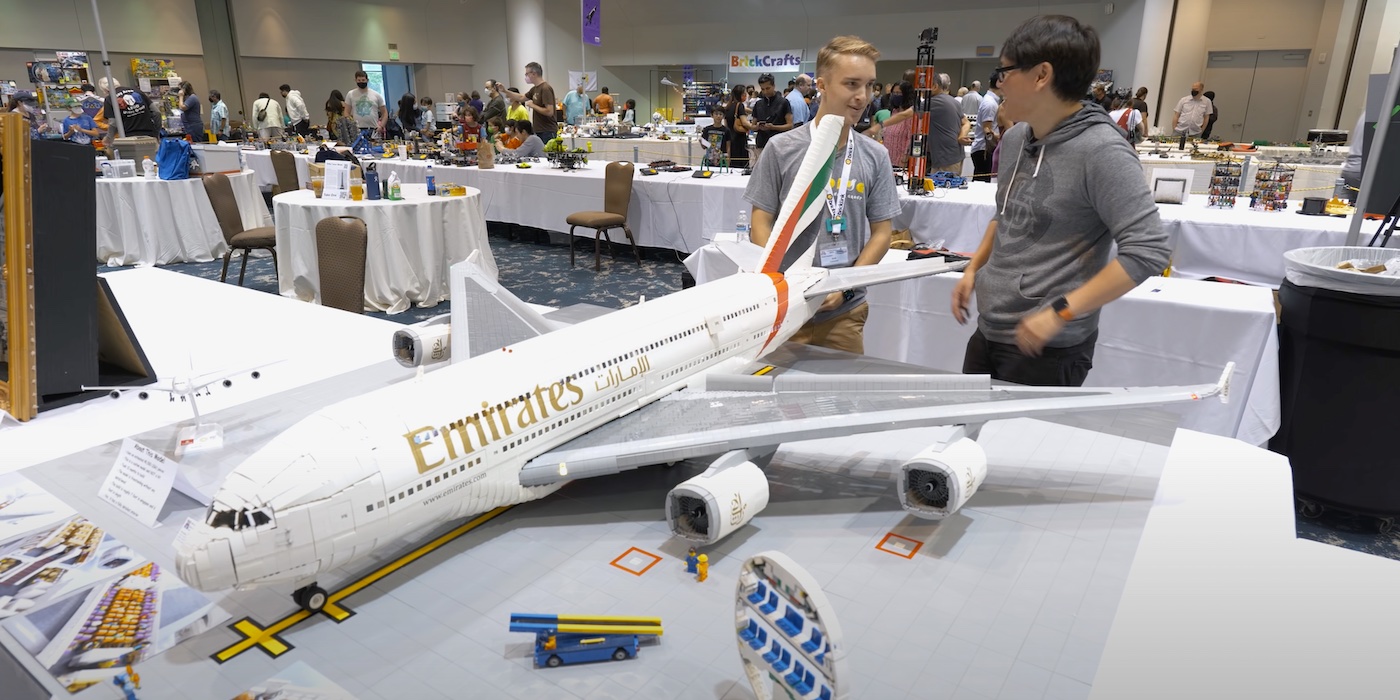 These brick-built scale models are as detailed as you can get and are all made to minifig scale, so they average over 5′ in length/width and contain thousands of pieces. These are some of the most massive and iconic civilian planes BigPlanes aka Jack Carleson has done – he’s also built military planes and  10 foot tall, 30k piece Saturn V.

The A380 is the world’s largest passenger aircraft in the skies. It’s wing span measures 262 feet. Details from its builder…

“This model measures 7 feet in wingspan and 6 feet in length. It uses an estimated 40,000 LEGO bricks and weighs roughly 90 pounds. The jet engines are powered by four lego ‘power functions’ motors (one in each engine) and the flaps are powered by a single lego ‘powered up’ XL motor at the base of each wing.”

He recently spoke with the folks at Tested about his A380…

The real thing has been out of commission for over a decade. When it was flying it had a cruise speed of 1,341 mph – able to get its passengers from London to New York City in a little under three hours. This model includes the Supersonic’s droopy nose…

“This is my LEGO British Airways Concorde MOC. It measures about 5 feet in length and uses an estimated 6-7,000 pieces. This model has a full interior, functioning droop nose, functioning afterburners, retractable landing gear and so much more!! I tried to be as innovative with the design of this as I could.”

This aircraft has been it the skies since 1982 and the majority of airline travelers have been on one. The details on this LEGO model is impressive…

“The interior of this model Is configured in a two class configuration with all seats being able to hold LEGO minifigures. Due to the limitations of LEGO minifigure scale, I was only able to fit 4 seats abreast and 2 lavatories in the rear of the airplane. There is also a full galley in the back of the plane along with a fully detailed cockpit at the front.

This aircraft has fully functioning tri-fold Fowler flaps to add even more realism to the wing. There are 6 exits on this aircraft 2 in the front, 2 in the rear, and 2 overwing emergency exits.”

Author: Mars Garrett
Pop culture staff writer that has been on the BoLS team since 2010. Contributor on the One of Us podcast. Marvel, Vertigo, and dystopian sci-fi fan. Enjoys bad movies, amazing stunt performances, and the internet. Hates rom-coms. (she/they)
Advertisement
LEGO Toys
Advertisement