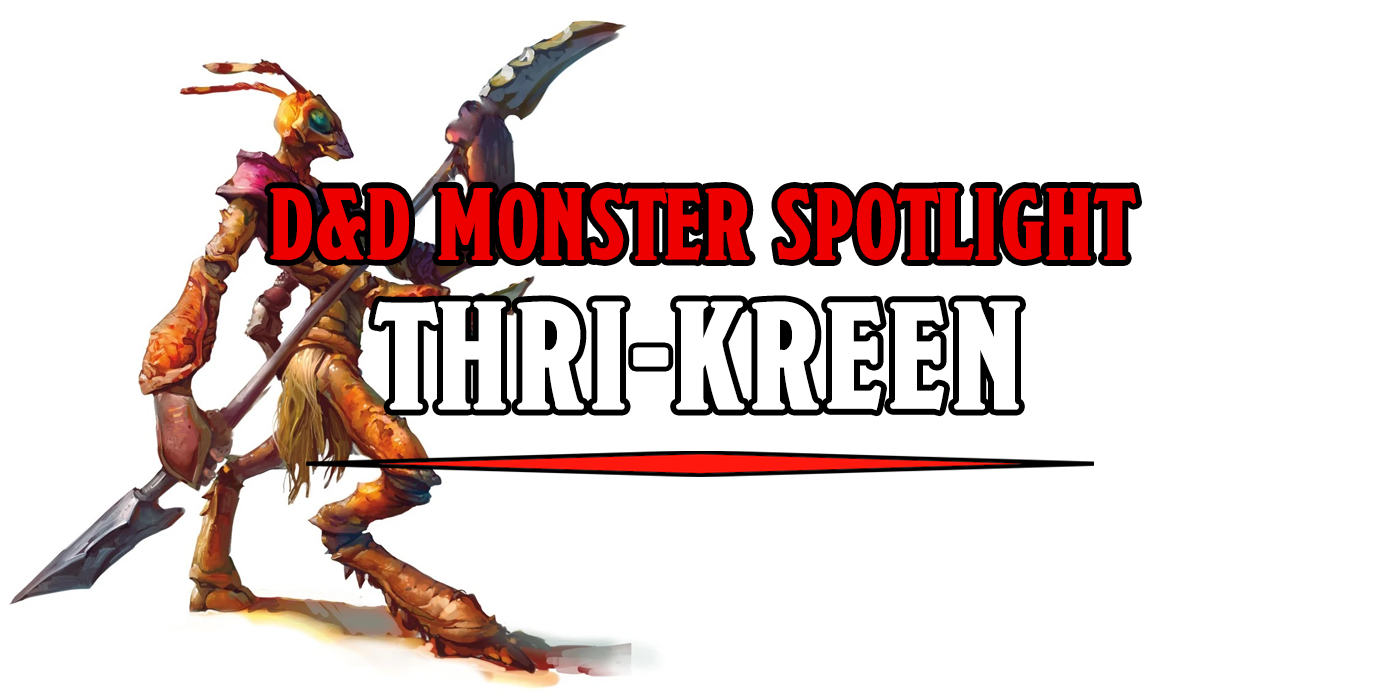 Spelljammer brought these desert mantises into space and made them playable characters. But who are the Thri-Kreen?

The Thri-Kreen aren’t exactly new to D&D with Spelljammer. In fact, you could find these mantis warriors in 5E’s Monster Manual already. But now they are featured as an option for a playable character. So let’s take a look back at the Thri-Kreen’s history through D&D and what they bring to you, the player, for your next character. 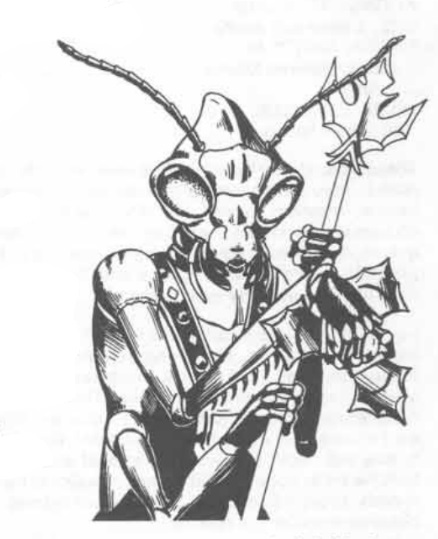 They may be space creatures now, but in 1E the Thri-Kreen were most likely to be found inhabiting dark burrows in desserts and dried grasslands. Strong and agile hunters with a fifty food horizontal leap and specialized pole-blade weapons. They also used bladed “throwing wedges” that would return to the thrower. Or, y’know, boomerangs. But even unarmed, they have four clawed arms and a bite that can cause paralysis. Though they’re generally neutrally aligned, Thri-Kreen were especially fond of hunting elves. 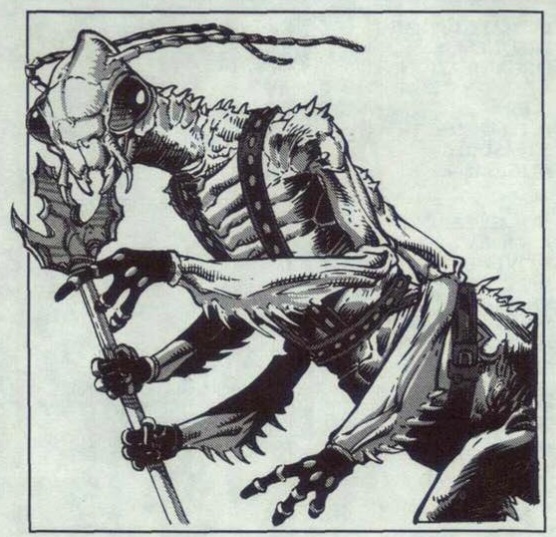 The Thri-Kreen were agile before, but in 2E they can dodge missiles. They’re not particularly social creatures, traveling in small hunting parties made up of clutch-mates and living in small, lightless burrows. These clutches are buried and abandoned in the sand in spring when Thri-Kreen mate. Young Thri-Kreen look like smaller versions of the adults with a single HP each and 1 HP worth of attack for each of their arms and their bite.

Ideally, they aren’t getting into many fights. But they are left to fend for themselves and instinctually see humans and elves as food. So this feels more like the “lay a lot of eggs and hope the numbers shake out” approach taken by sea turtles. 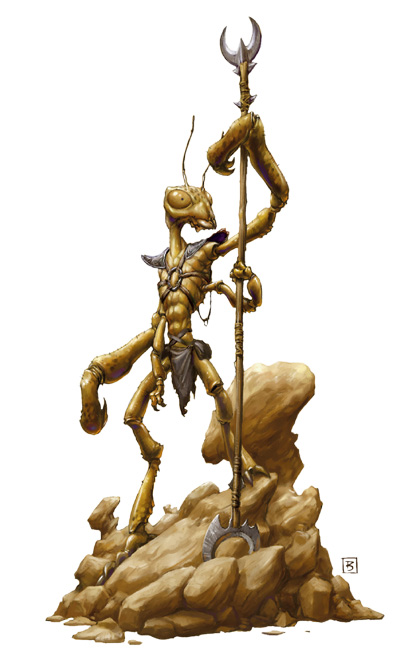 Little is added to or changed about the 3E Thri-Kreen. In fact, it feels as though this edition has much less to say about them than previous editions- and it’s not as if they were getting multi-page spreads before. Now though, it’s noted that they are faultless trackers and are known to nomadically travel vast distances of the desert.

This is also one of the few instances where how to incorporate them as a playable character is introduced. Does this mean they’re slightly more social now? That they don’t like to live in dark subterranean burrows? I guess that’s up to you and your DM. In stark comparison, 4E always seems to say too much about monsters with multiple varieties of every creature. This time there’s a Thri-Kreen Scout, Ambusher, and Talker… who don’t converse as much as their name would imply but rather passes harsh desert judgment on trespassers. Thri-Kreen thinks that anyone who lives outside of their deserts is weak. But their psionic abilities let them find allies among beasts and common ground with druids. Now that they’re in space, the Thri-Kreen are….. by and large, the same. Just in space. As a monster, you may encounter the Gladiator, Hunter, or Mystic Thri-Kreen. The latter of which uses psionics to navigate space, go invisible, and drain the life out of the prey. And as a playable character, their second set of arms, telepathy, and no need to sleep can be yours.

Have you encountered a Thri-Kreen in your D&D adventures? Were you able to communicate with them or did they try to eat you? Would you play a Thri-Kreen character? Let us know in the comments! 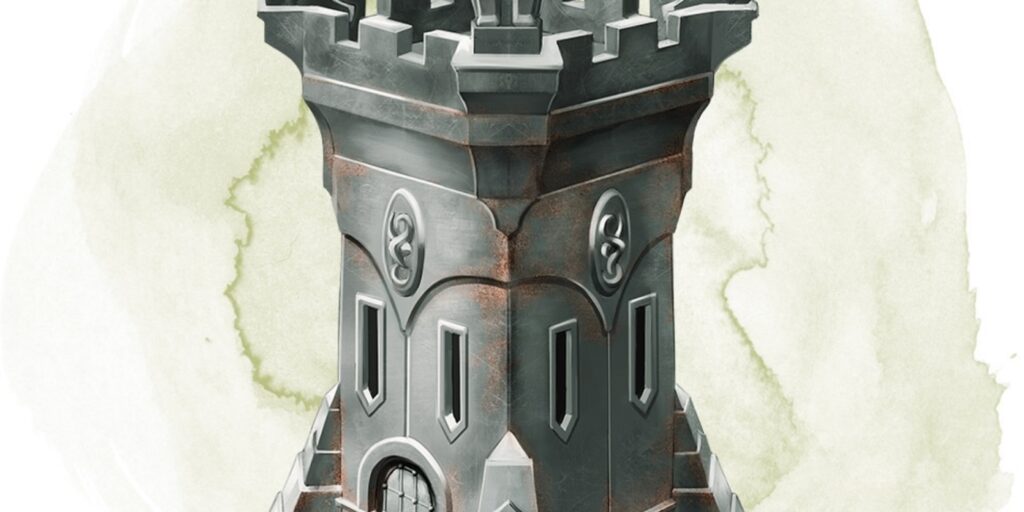