Warhammer 40K X Magic: 5 Necron Cards To Watch Out For 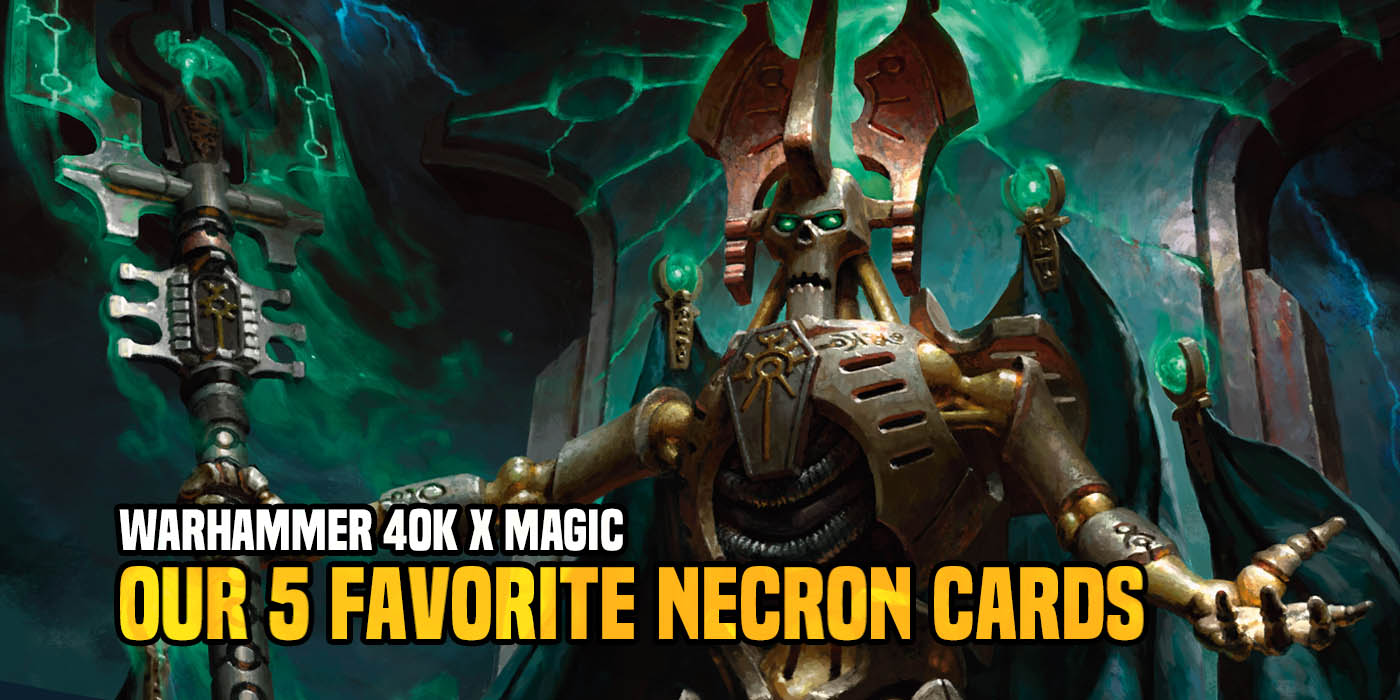 Wizards of the Coast has dropped a bunch more spoilers for the upcoming Universes Beyond Magic: The Gathering card set. This crossover features 4 commander decks from the Warhammer: 40,000 universe and we’re here for it. Today, we’re checking out 5 more cards from the Necrons that are looking pretty bonkers. Can you build a deck around them besides a commander format? We know folks are going to try… 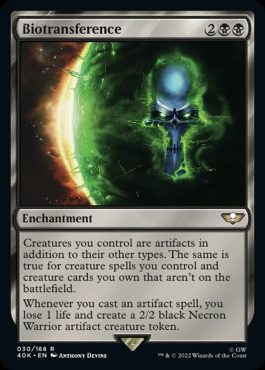 Let’s just start with this unassuming card. Biotransference turns your creatures into artifacts in addition to whatever other types they were. However, everytime you cast an artifact spell, you lose 1 life and gain a 2/2 black Necron token. It’s important to note that his basically means every time you play a creature you’re losing 1 life and getting a 2/2 black Necron token…that’s going to be important later. 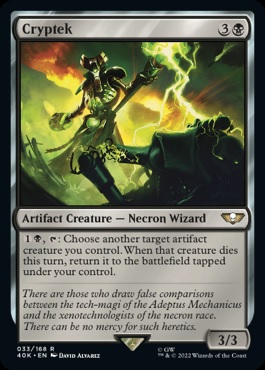 The Cryptek allows you to designate a creature that’s about to die this turn to come right back after it dies under your control. Ya know…as long as it’s an artifact. Which, if it’s a Necron, it’s got a really high chance at being. Also, see Biotransference.

Shard of the Nightbringer 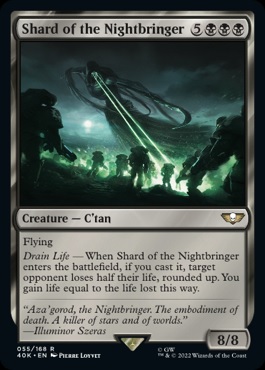 The Shard of the Nightbringer isn’t a cheap card. This is certainly one of those creatures you’re going to drop when it’s about time to go for the throat. But if an 8/8 flyer isn’t good enough check out that Drain Life ability. That should help in getting back all that life you’re losing with a vengeance! Especially if you’re using the next card to help pay for it… 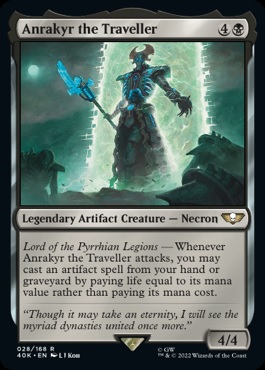 Paying 8 life to play the Nightbringer from your graveyard seems REAL GOOD. Not to mention Anrakyr is a 4/4 beatstick on his own. The combos with this and some of the other cards are real good…if you don’t mind playing with your life pool. 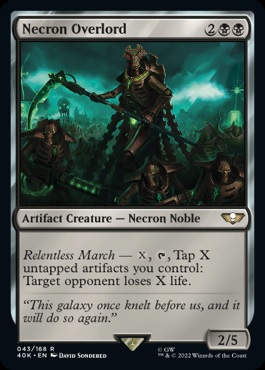 You know how you’re making all those artifacts and but you just can’t see a way past all their blockers? Well, if you need a back-up plan then the Necron Overlord is your plan B. Just hit your opponent directly for X damage!

There’s a BUNCH more Necron cards to check out from this set. We’re pumped about it and while I’m still Team Tyranid, I’m looking forward to the other decks to figure out how those will work!

Those Necrons are back in black!

Author: Adam Harrison
Writer, Editor, Texas Native, and Austinite for 15+ years, Adam covers all things Tabletop Gaming. Which includes Warhammer 40,000, Age of Sigmar, D&D, Board Games and everything else that involves dice, boards, cards and a table. A hobbyist, player, and collector of miniatures and games, Adam's current obsession are his Death Armies for Age of Sigmar, his Blood Angels and Tyranids for 40k, and his ever growing Arkham Horror: The Card Game Collection.
Advertisement
Games Workshop Magic: The Gathering Rules Warhammer 40k Wizards of the Coast
Advertisement 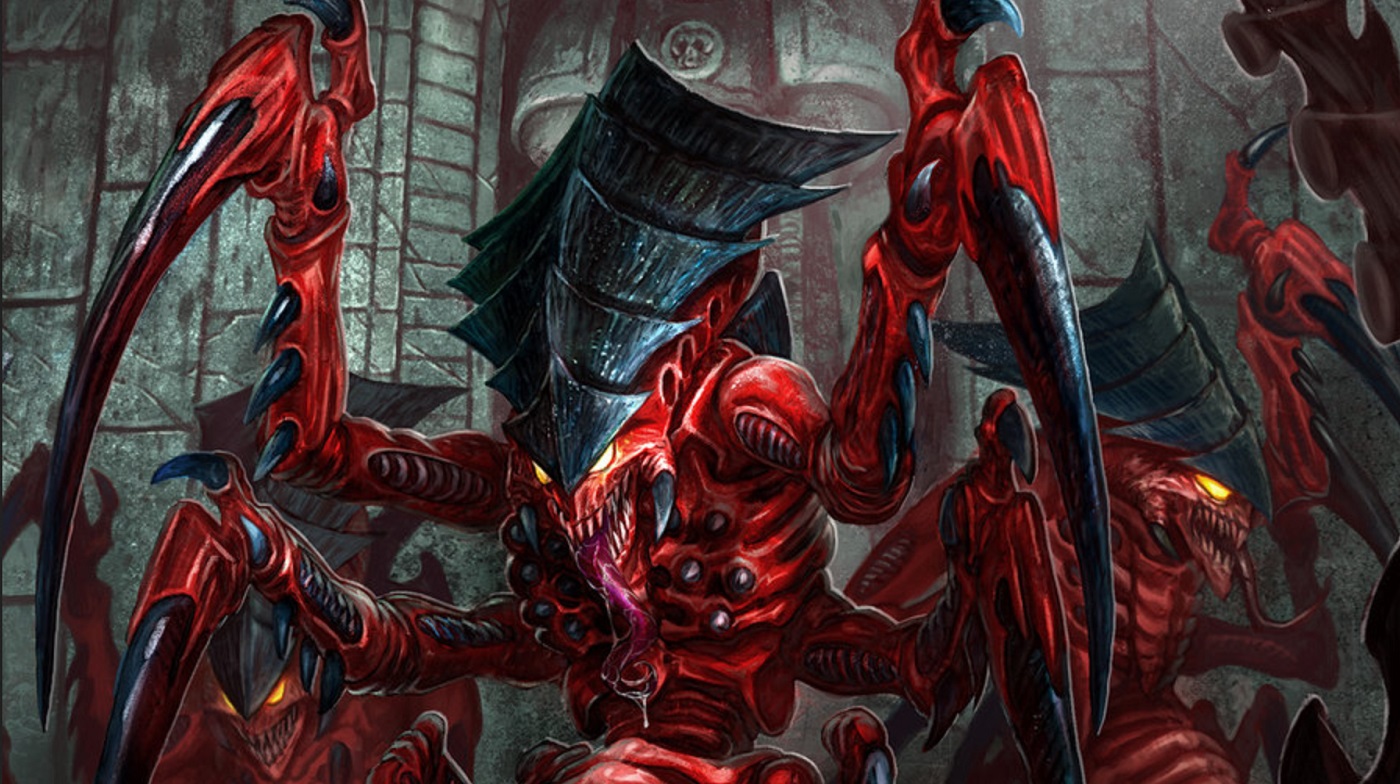