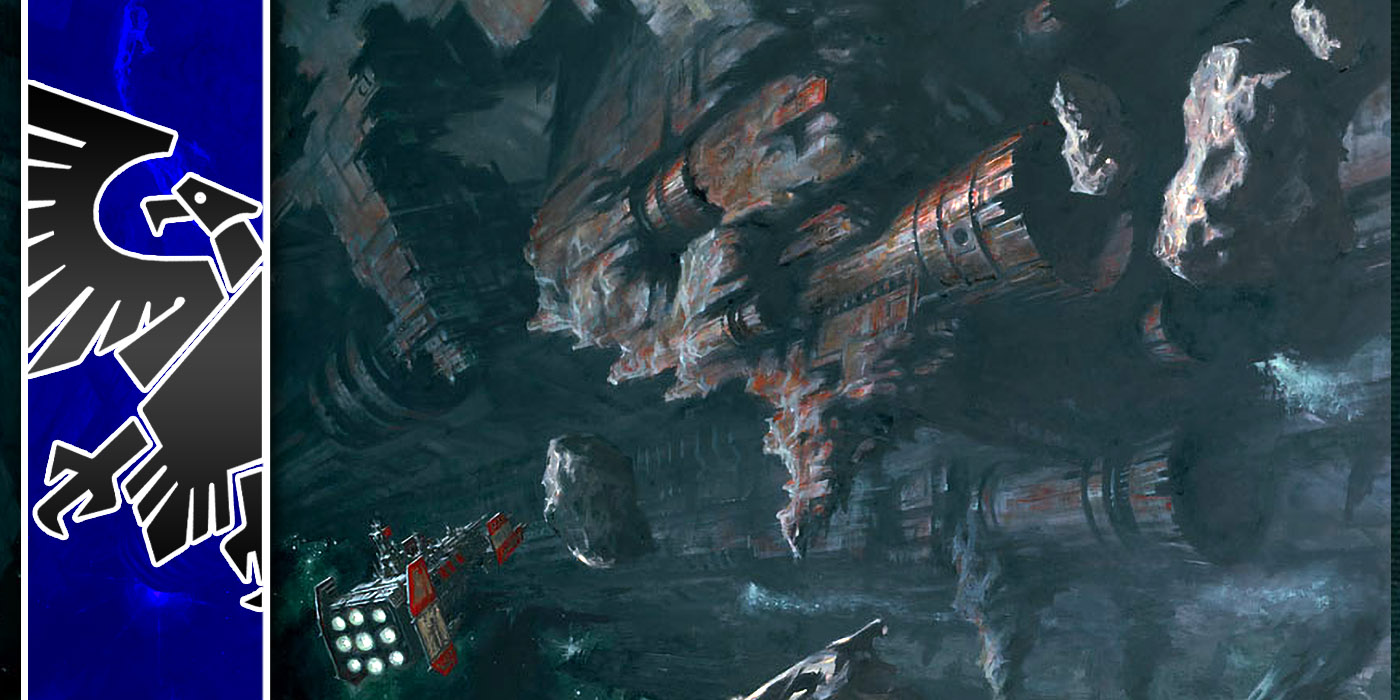 A Space Hulk is a massive conglomeration of lost ships and wrecks fused together. They drift through space and in and out of the warp and during the millennia the lost ships join together into one enormous body. Frequently, they are so huge that they have their own atmosphere and gravity. Since the hulks often exit and re-enter the warp seemingly at random, searching or traveling in them is dangerous in the extreme.

The Imperial Navy, and all Imperial forces and authorities as a whole, have standard orders to survey such objects and to report their location. The hulks consist of ships and items of technology millennia old and the recoverable technology can be of immense value to the Imperium, and especially to the Adeptus Mechanicus, thus elite Imperial forces are sent aboard to clear out infestations. Depending on the strategic situation (availability of troops, proximity to vital Imperial star systems, safety margins, etc), Space Marines are sent to purge the hulk of any alien infestations.

Space hulks are dangerous, as they are commonly used as a means of transport by certain unsophisticated factions. Orks, Genestealers, and Chaos renegades use them occasionally to invade other worlds. As the warp jump of Space Hulks is essentially made in a random direction this gives them the advantage of surprise.

Therefore the mission of boarding space hulks is extremely dangerous and normally entrusted to Terminators, the Chapters’ most experienced elite who are heavily armed and armoured. In some cases this is an impossible task, due to too-powerful enemy resistance, too few available Imperial troops, too close to vital systems, etc. In such cases, the bombardment and total destruction of the hulk is the only viable alternative. Space Hulks are huge and durable, as even Nova Cannon blasts are not enough to cause significant damage.

The movements of known space hulks is tracked by the Imperium and several have semi regular patterns due to the strange currents of the Warp. Several are known to move in and out of the warp appearing a regular locations, while the exact timing of their appearance and disappearance in realspace is unknown.

The Sin of Damnation is a space hulk that was assaulted by the terminators of the Blood Angels’ First Company, led by Captain Michaelus Raphael in 589.M41. Six hundred years before the arrival of the Sin of Damnation, the entire Blood Angels Chapter was decimated during a failed assault on another space hulk in the Secoris system, leaving only fifty Marines in the whole Chapter. Six centuries later, the Sin of Damnation, was spotted by Rogue Trader Borrak Vorra near the Blood Angels’ fortress monastery on Baal. Spurred on by their shame from the disaster in Secoris, the Blood Angels dispatched their First Company, under the command of Captain Raphael. The Space Marine force, consisting of over eighty Veterans in Terminator Armour, managed to not only cleanse the hulk of thousands of genestealers (approximately forty thousand genestealers), but also recovered an ancient Blood Angels’ artefact in the process. 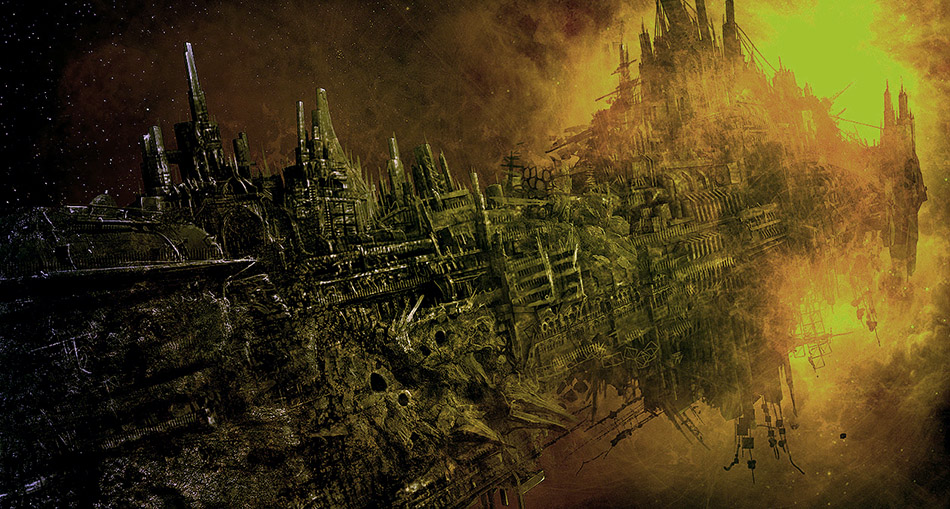 Wurld Killa was a Space Hulk famously acquired by Warboss Ghazghkull near Urk in order to invade the world of Armageddon. Originally a wreck in the orbit of Urk, it was boarded by Ghazghkull and his boyz in their mission to flee the dying world. The Hulk was packed with Daemons thanks to a Warp Rift at its center. During the boarding operation to claim it, a young Ghazghkull defeated a Bloodthirster before headbutting the rift shut. It crashed into Armageddon at the onset of the second invasion, devastating the planet. 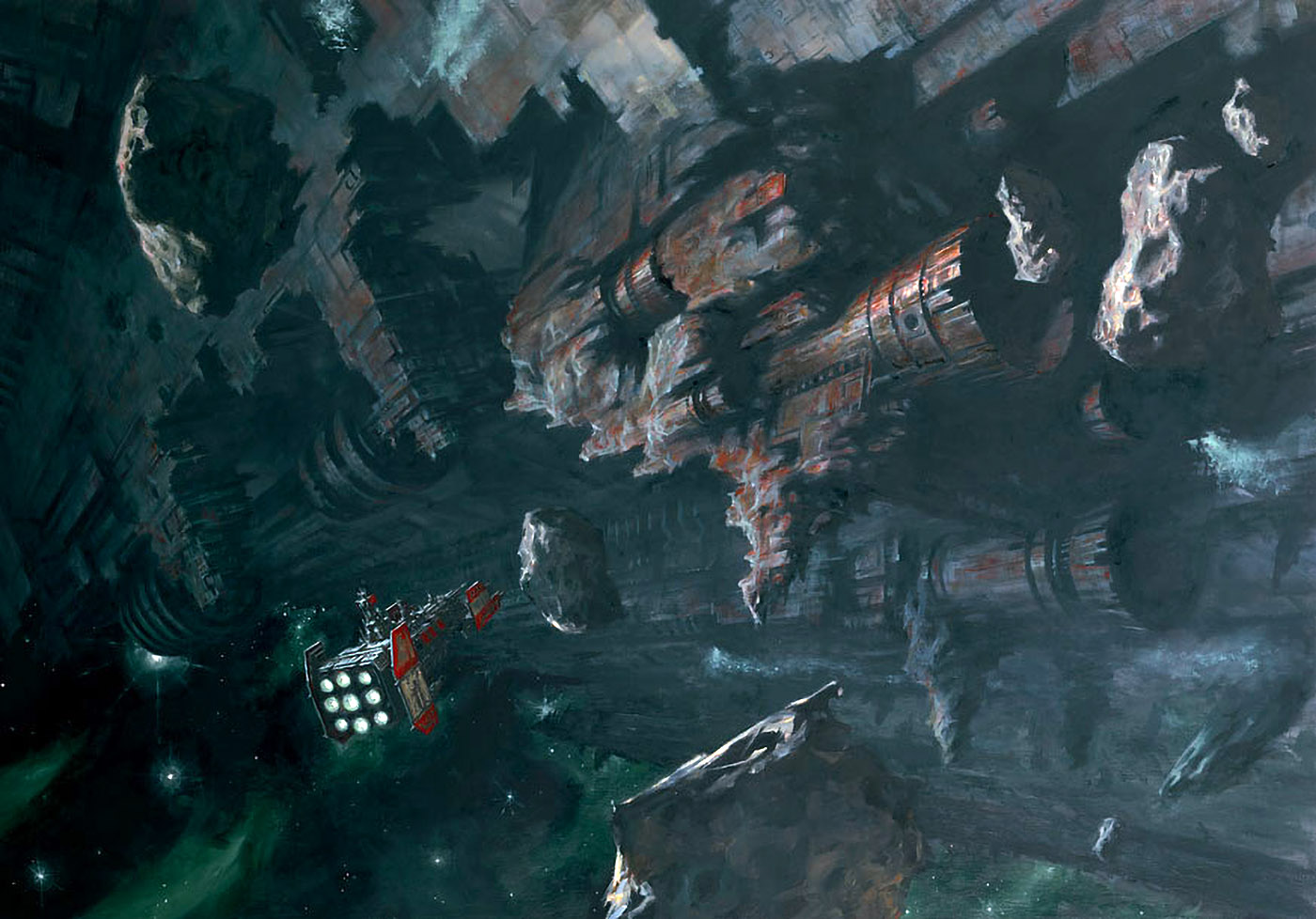 ~With all those Arks of Omen drifting about, who knows what Abaddon is up to…