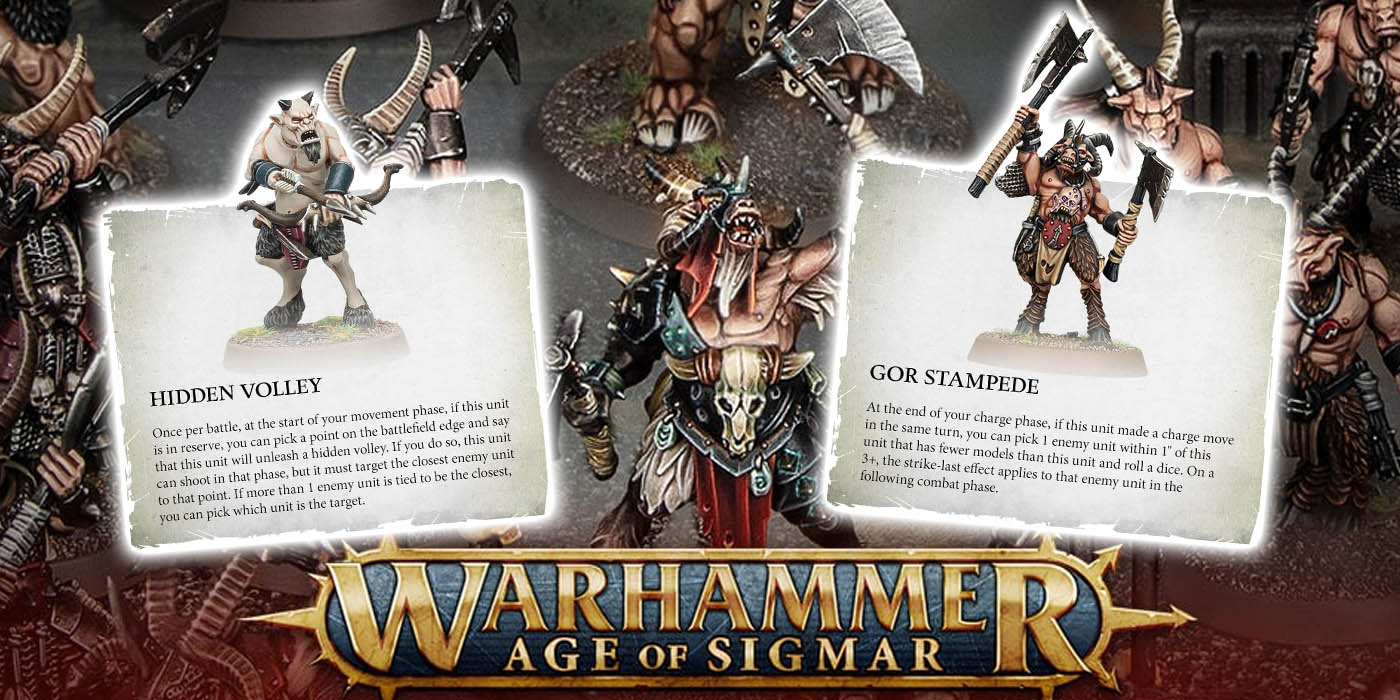 The Beast of Chaos are gearing up to take to the field with a new Battletome. Here’s a peek at their new rules.

Games Workshop is dropping some previews for the upcoming Beast of Chaos rules. It’s kind of funny because this is one army that’s doing quite well in the meta thanks to a White Dwarf update. 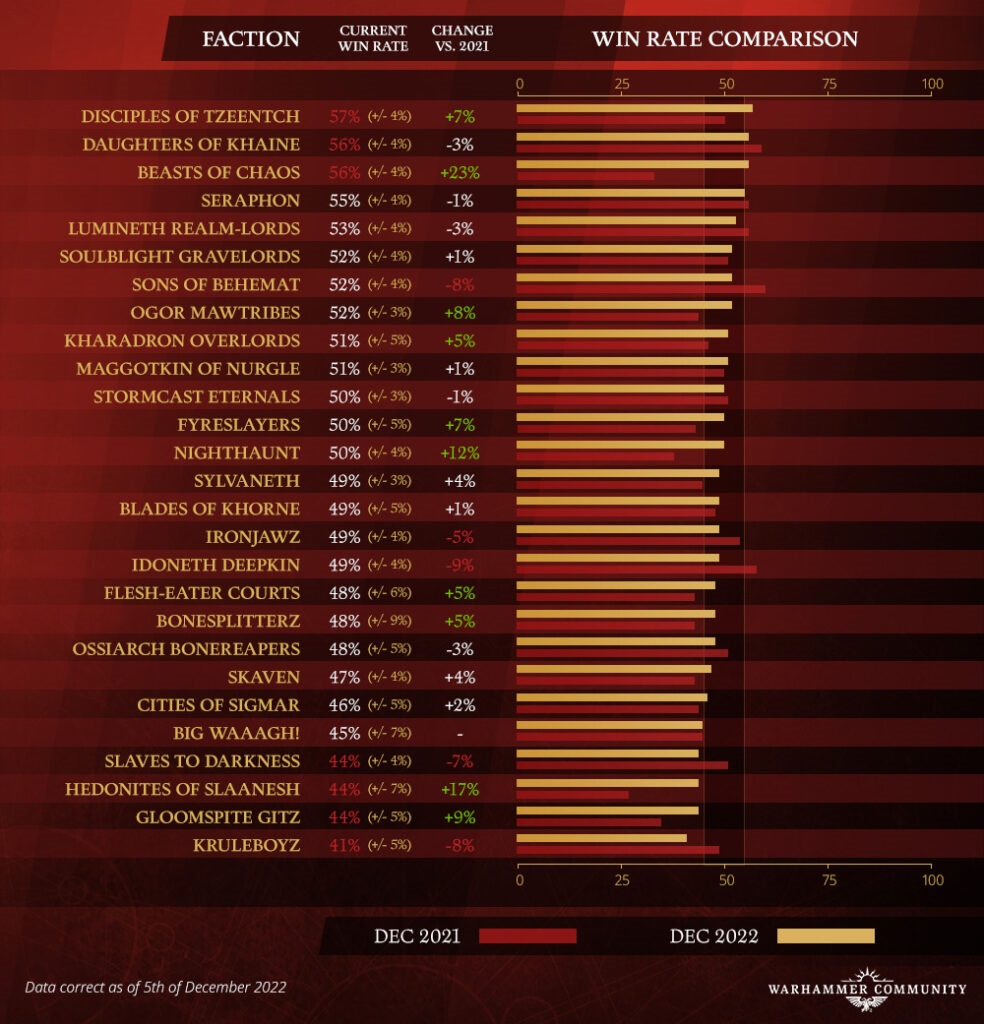 That’s really good considering their Battletome is pretty dated — turns out that White Dwarf update was exactly what the army needed to become very competitive. Anyhow, we’re about to see a shift with the army thanks to the new Battletome and I’m willing to bet that the Beast of Chaos players out there are hoping this one incorporates a lot of the White Dwarf changes and then some!

“These plundering primitivists exercise their right to devolution through ritual combat and bloody sacrifice, but the gor-kin far from mindless savages. They’re such skilled and sneaky hunters that a Beastherd Ambush can conceal a whole army – only revealing themselves at the last possible moment.” 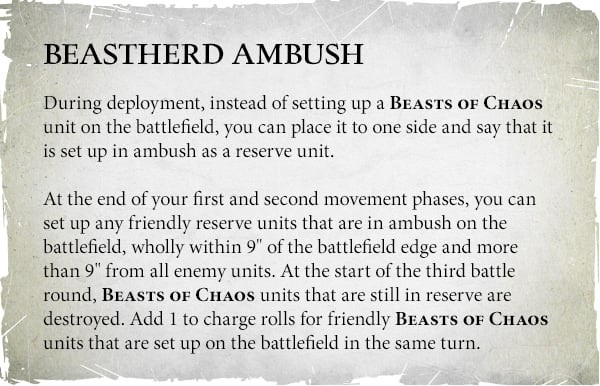 This is a dangerous and deadly ploy! Finding the right balance of units to be on the tabletop and in reserve is going to be tricky but can open up a ton of tactical options for your army. Your forces can pop-up wholly within 9″ of any battlefield edge and more than 9″ from enemy units. That can be a wide area to play with.

The icing on the cake is they also get +1 to charge rolls making that surprise attack an 8+ charge! And that’s before any charge bonuses from musicians… 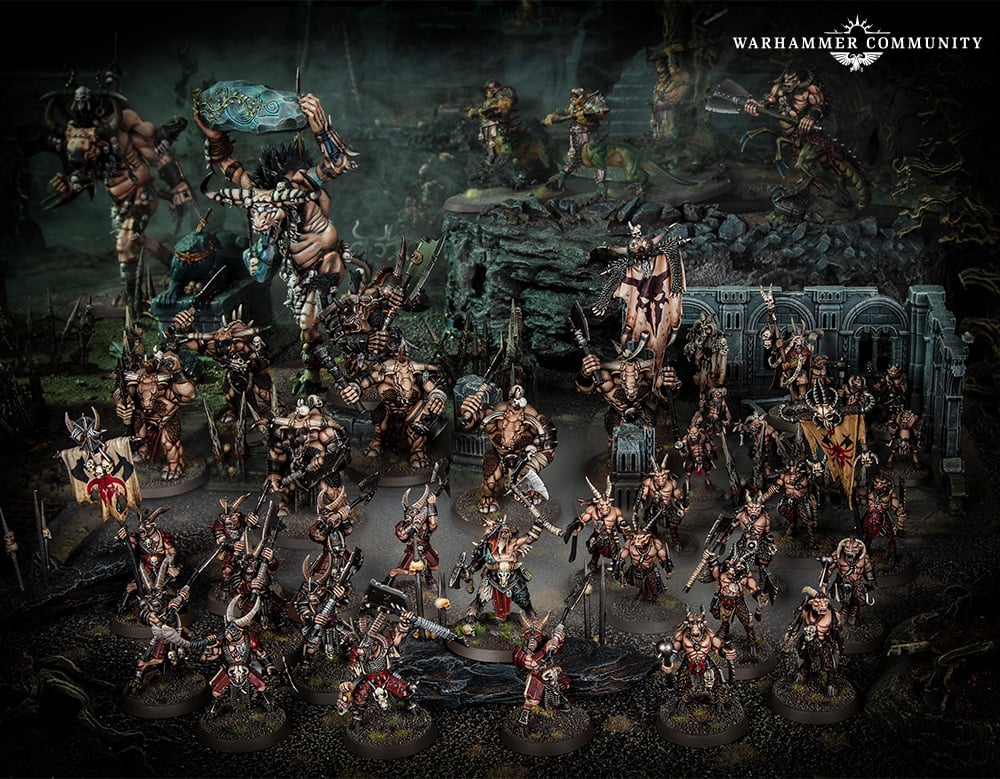 Also, according to GW, you’re general will still be generating a command point each turn even from in reserves! That’s one way to protect your general and still generate those valuable CP. Leaving them in reserve for a turn or two might not be a bad move. 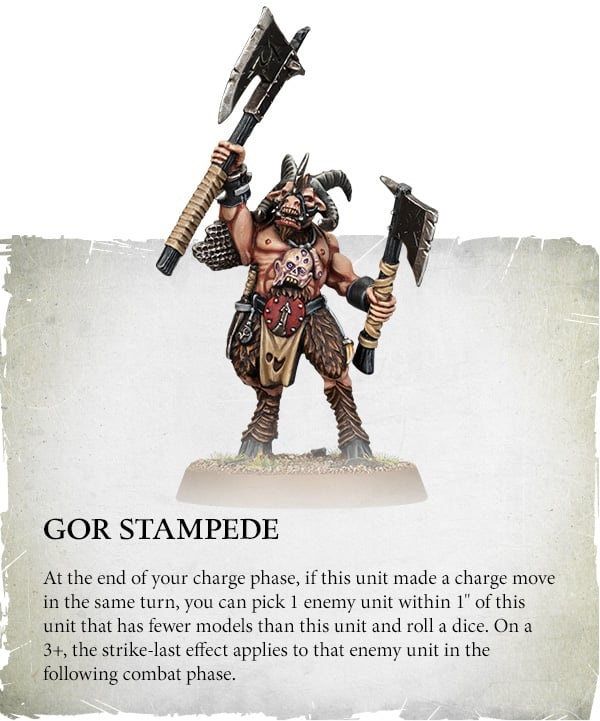 The Gors have a special stampede that can really mess-up your opponents activation. Kicking off on a 3+, this forces the enemy unit to strike last — providing you have more models them them. Combo this with your heavy hitters to keep them protected.

Slaangor Fiendbloods are also in the new Battletome and bring some nasty tricks with them. They now do an extra attack at 2 damage each. Plus, their special rule allows them to activate twice in a single combat phase once per game! 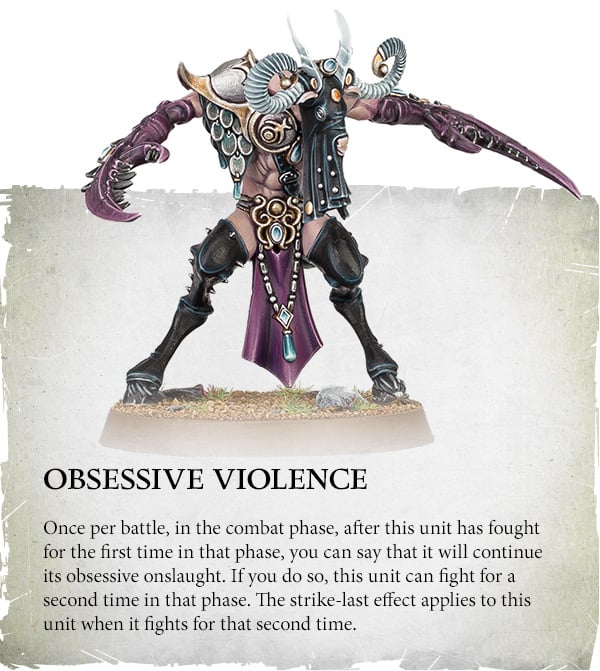 Getting to swing twice in a phase is a great way to clean up a unit. As a big fan of Varanguard in the Slaves to Darkness army I am also a big fan of this ability.

Ungor Raiders have an ability to fire from off the table once per game! That’s actually kinda of surprising… 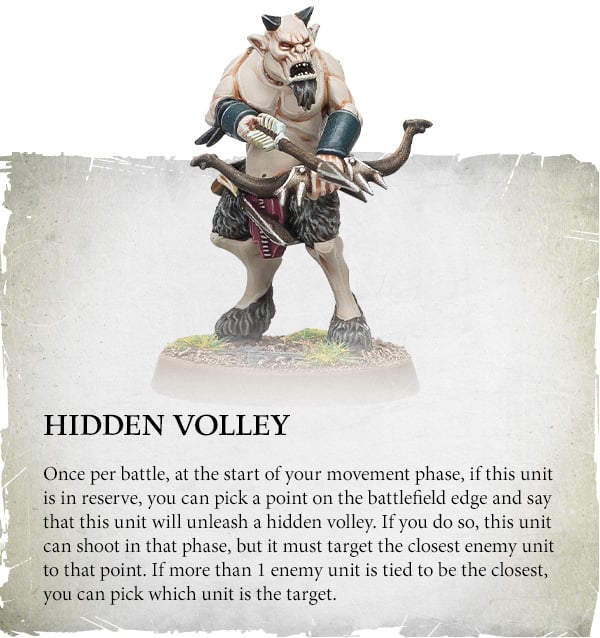 What’s even crazier is that you can use this ability at the start of the movement phase which means you can also bring them IN from reserves during the movement phase and then shoot AGAIN in the shooting phase. Sneaky. Very sneaky. 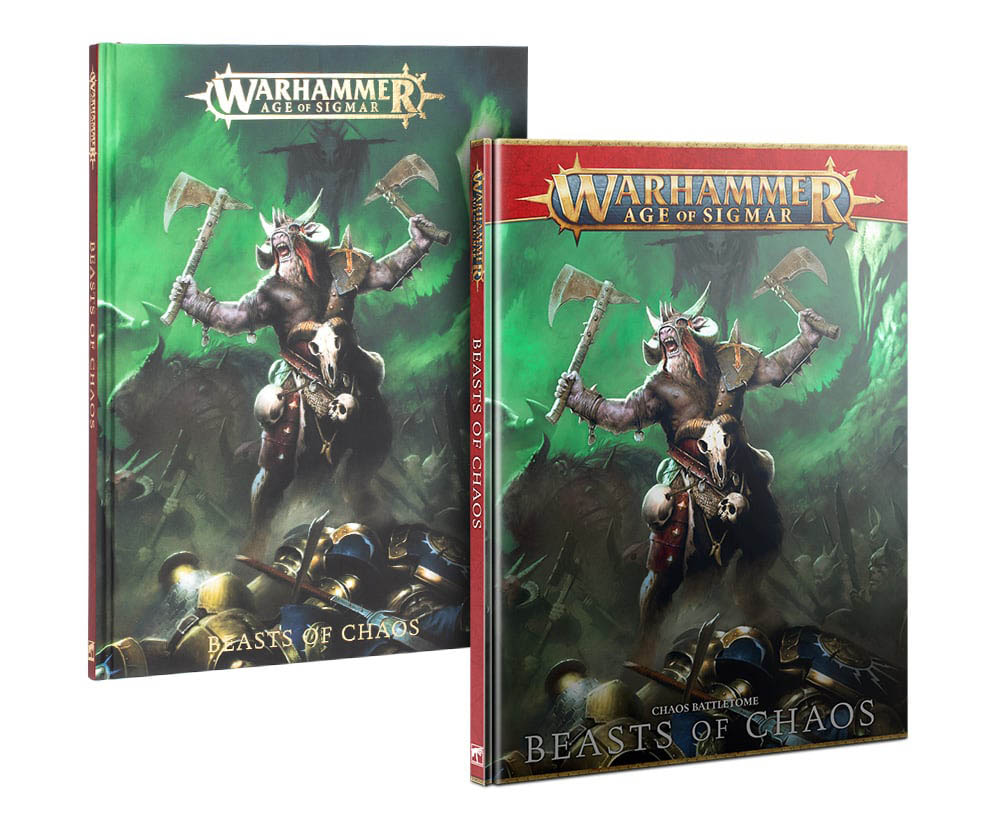 The new Beast of Chaos Battletome is going up for Pre-order this weekend. Do you hear the call of the herd?

Author: Adam Harrison
Writer, Editor, Texas Native, and Austinite for 15+ years, Adam covers all things Tabletop Gaming. Which includes Warhammer 40,000, Age of Sigmar, D&D, Board Games and everything else that involves dice, boards, cards and a table. A hobbyist, player, and collector of miniatures and games, Adam's current obsession are his Death Armies for Age of Sigmar, his Blood Angels and Tyranids for 40k, and his ever growing Arkham Horror: The Card Game Collection.
Advertisement
Age of Sigmar AoS Chaos Games Workshop Miniatures
Advertisement

Warhammer 40K: The Palace of Slaanesh 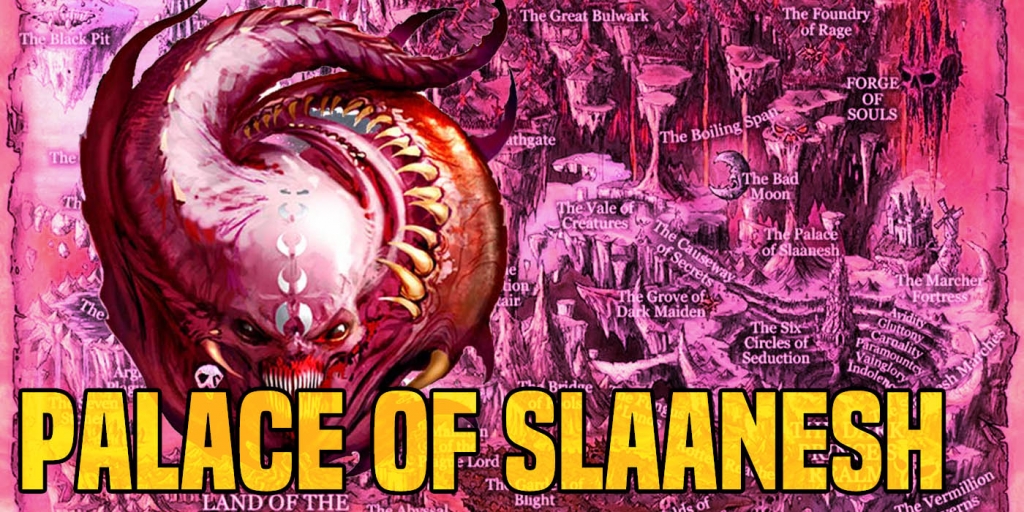