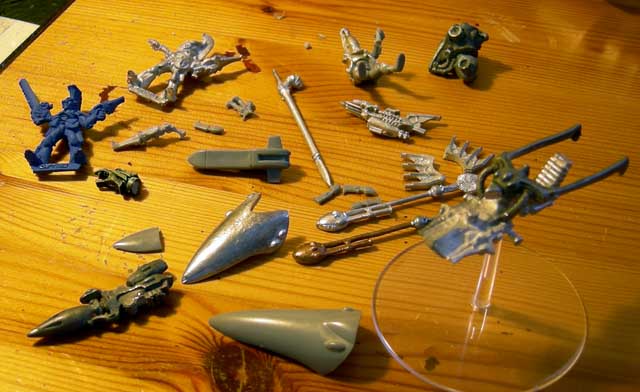 Now that the Titan is done its time to move on. As previous posts have shown, I have a LOT of Eldar models. So many, that when the new codex came out, it was mainly a matter of learning the rules and coming up with new armies. There were practically no models I didn’t have. The excpetion to this was the Autarch.

I can go pickup one of the 3 variants GW produces, and will probably opt for the cheap “on foot” leader to use with budget armies, or when he needs to stay embarked. For general games, however, I will need to come up with a mean badass sucker to be able to compete for HQ slots against the Avatar and my selection of Farseers.

The mean”mobile” build will be:

This is the mobile sniper who can nail folks from 48″ at BS:5, then move in for the kill if needed with 6 S:6 Power weapon attacks on the charge.

I had seen the cool conversion of the jetbike Autarch on GW:France’s site, and took a look through my bits box.

I found parts of an old RT Eldar jetbike, a cowl from a modern one, some BFG Eldar spaceship parts, and a ton of eldar bits, and finally some High Elf Knight bits. It was time to go.

First up was to glue on the exhaust stacks from a wraithlord onto the handlebar mount of the RT Jetbike. I snipped the exhaust tubing and bent ir down to glue into the jetbike hull.

Next up was the body from a BFG Eldar frigate. This was heavily cut down and fitted into the forward jetbike body to support the new plastic canopy.Next up was some spaceship solar sails glued onto the rear body.

Under the forward cowl, I spent quite some time hacking up an Eldar Missile Launcher and centermounting it to fire from its recessed mount. Some minor Eldar bits filled in odds holes and empty spots, while I snipped the wraithlord exhaust plumes to turn them into handlebars for the Autarch. Finally I added a rear pennant rod from an ancient RT Eldar pirate to the back of the seat to balance the model out.

With his mount completed, it was time to move onto the Autarch himself. I started with a Guardian jetbike leader who happens to have a nicely detailed torso, and attached the Fantasy High Elf Lance arm to him. The left arm is holding a handle that I glued hanging off of one of the handlebars to represent the firing controls for the jetbike. Some eldar grenades got added to his waist, and a jousting shield to cover his lance shoulder and I was all done.

Next up is deciding if I can scavenge up a Striking Scorpion head, and then its off to base-coating.