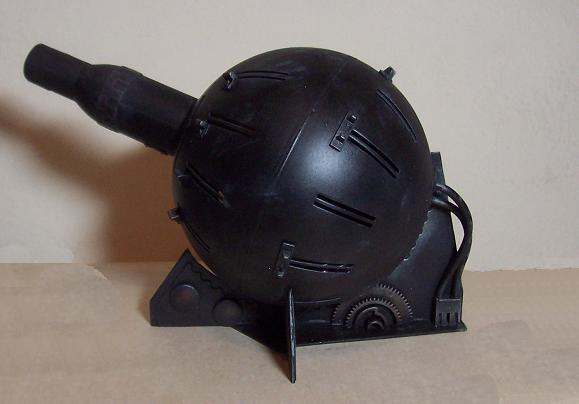 The data sheet for the imperial defence laser that GW put up last week was just too good for this big mek to ignore. And in preparation for the big (30,000+ point) Apocalypse game BattleForge scheduled for last weekend, I got to work building one.
Other than the gun itself, the biggest piece that stands out is the spherical turret. Bigred casually mentioned hamster exercise balls, the kind you put the little critters in to let them run around the house. Petsmart sells a 5″ model for a few dollars. Let me tell you, it worked out great. The size was perfect, the little slits were perfect, and the door that comes off was great for the gun (more on that later). I had an old toy rocket sitting round that house that I used for the gun barrel. I cut the ends off, leaving a large hole. There was a hole in the side the toy manufacturer used to screw the two halves together. I put a little riveted plasticard over this and another small piece near the end of the barrel for accent.
For the base, I put two thick pieces of plasticard at 90 degrees to each other. I had to cut out the inside so that it would match the 5″ diameter of the ball. This was harder that is looks and I still didn’t get it perfect. I took some thinner pieces of plasticard and cut a slightly larger circle out of them. I then gave them some texture with the edge of the hole punch. These were placed on either side of the thicker pieces. A few wires and bits here, half of a gear there and it was done.
The pictures turned out darker (and glossier) and it really is. It is a dark grey with lighter grey drybrushing over it. It was a pretty simple build and took a little over 3 hours, start to finish.
About a year ago I went to a friends wedding. On each table that had some sort of decoration with a small LED candle in side. After it was over, I asked if I could take a few home to play with. If you have never seen these, they are kinda cool. They use 2 white LEDs to simulate flickering of a candle. in reality it looks more like pulsing than flickering. I took one of these “candles” and attached it to the inside of the sphere. This gives it a glowing effect. I know, its pretty cheesy, but I was getting tired of the things sitting on my desk never getting used 😉 I use the door to the hamster ball to turn it on and off. Very handy.
I wanted to make a large tower to place it on, but ran out of time and had to use a terrain piece in the game.