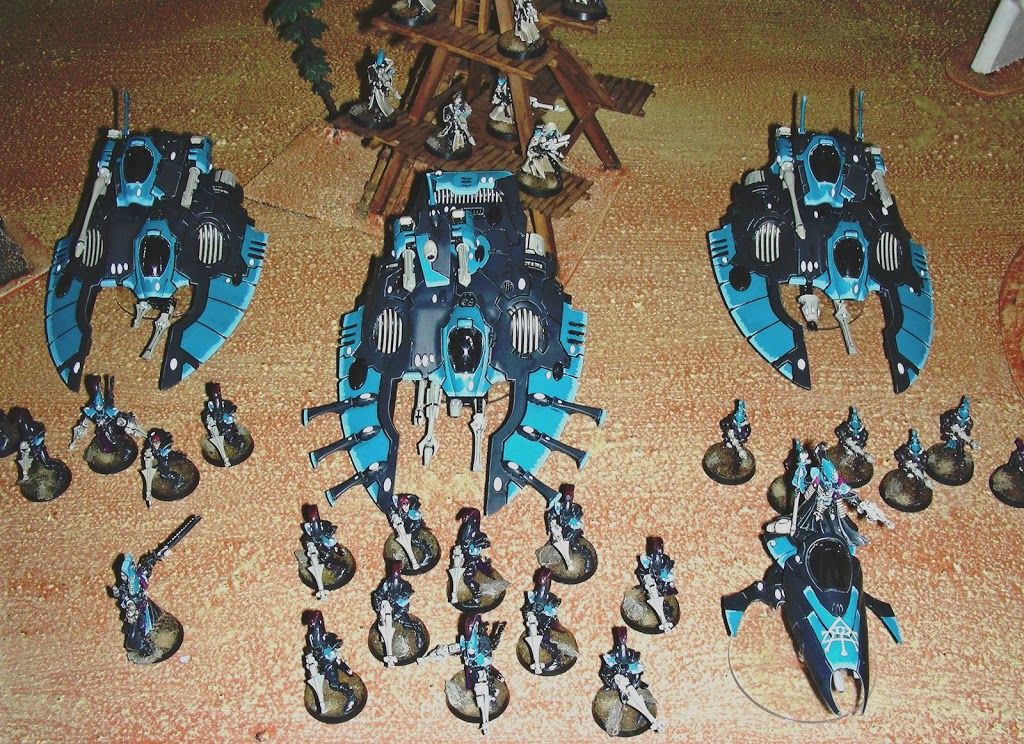 So I don’t post here very often mainly due to not having any interesting topics to cover. But with bigred being gone I figured someone had to pick up some slack. So recently I realized I certainly play a fair number of games, and what better source material is there? Thus this is the first in what I hope will be a series of battles, which will be themed in ‘tactical challenge groups’. The first such group will be a number of battles in which I grapple with the use of Mechanized Eldar sans Holo-field.

So thus I come to a 1,250 point battle versus Kings’ IG. The mission was Secure and Control. Deployment-
I set up my tanks behind cover where ever I could and used my Pathfinder Infiltration plus Scout combo to deny a large amount of space to the enemy infiltrators while still deploying in heavy cover with them. The IG spread across the deployment zone, anchored on either side by the Imperial armour. I won the roll for 1st turn.

Farseer Agwe gazed out across the dunes. He knew somewhere out in the sand there were the Relics of Kurnous, ancient tools that he could use to further his cause. But gazing even farther, into the many eventualities of the future, he saw that someone else desired the Relics aswell. An Inquisitor, by the name of Konig, had sent his forces to the surface of Exeterion aswell. Battle would come here, Agwe could feel it.

Tir’sahras Turn 1
The desert floor raced by Athurils’ vision as the Eldar star engines boosted him through the skies. The Falcons redeployed from one side of the battle to the other, attempting to deny the firepower of much of the Imperial army. The Pathfinders, though their eyes were keen, did not manage to find a kill in the Guard lines. Bregenzian Turn 1
A few pieces of Guard armour move forward but the rest of the line remains still. A lone Sentinel skirts along an ancient Eldar portal and attempts to down the Wave Serpent. Though his aim is true the bolt of light stops just short, breaking upon the Serpents energy field. The entire left flank of the Guard line blasts away at the Pathfinders, yet only a shell from the Russ lands on target, killing two, and forcing them to fall back to safer ground.

Tir’sahras Turn 2
The Farseer searched the threads of the future, spelling the doom of the Stormtroopers.Two of the Eldar skimmers deftly glide over the ancient portal and hover low, disgorging their passengers on the desert sand. The Wave Serpent’s scatter lasers chatter can be heard through the wind, pattering against the Sentinel’s armour until flesh is found. The pilot slumps in his seat, dead. The Fire Dragons level their fusion guns at the Demolisher, obliterating it in a spectacular fashion. Meanwhile the Dire Avengers complete the doom of the Stormtroopers, five falling to the ground, shurikens protruding from their chests. Bregenzian Turn 2
Another unit of Stormtroopers silently fell to the sandy dunes, born on desert winds. Though a great Seer, Agwe didn’t even see them coming, as two bright bolts of plasma knocked him from his dais to the ground, mortally wounded. The Imperial Guard infantry, targetted one of the Falcons, blowing off its scatter laser. The other unit of Storm Troopers, though many of their number had died, charged into the small unit of Avengers, killing two. Tir’sahras Turn 3
The Wave Serpent changed directions in mid-air pulling towards the newly landed Stormtroopers and the Dire Avengers lept deftly to the ground. At the Exarchs signal they let loose with their catapaults scything the troopers down like wheat. All the bloody devastation around them was too much for the elite soldiery and they fell back
towards their lines. At another part of the battle the Fire Dragons charged into the Imperials attacking the Avengers and bludgeoned them to death with their fusion guns. Bregenzian Turn 3
The fleeing Stormtroopers manage to shake the crew of the Falcons with their Meltagun. However, things do not go well for the rest of the army, as their combined fire accounts for only two Fire Dragons. Truly Khaine smiled upon the forces of the Eldar.

Tir’sahras Turn 4
The remaining Fire Dragons, staying true to their goal, move and fleet behind the Eldar portal, and secure an Eldar artifact. The two Dire Avengers left from the Falcon unit level their shurikens at the Imperial Guard Command HQ and scythe down two veteran soldiers, who hold under the sight of their banner.

Bregenzian Turn 4
The fleeing Stormtroopers, in one last act of defiance, level their plasmagun at a Falcon, sending it crashing to the sand below. The crew of the battle tank, meanwhile, are able to knock the turret off the Wave Serpent in a blast of flame and shrapnel.

Tir’sahras Turn 5
The Wave Serpent floats over a tower and the Avengers within lithely step onto its wooden planks. Again at the Exarchs command the air is filled with razors and seven Guardsmen fall to the ground, clutching their faces and throats. The remaining Falcon conceals itself behind the ancient portal. Bregenzian Turn 5
Then Captain Murphy, enraged at the death of so many of his fellows, brazenly charged his Command HQ onto the tower where the Dire Avengers perched. Like a crazed dervish, the Officer smashed Eldar to the ground all around with his powerfist, though the Eldar held. Tir’sahras Turn 6
The Falcon, on the thrust of its star engines, raced across the field to claim another ancient Eldar artifact. The Command HQ and the Dire Avengers continued to batter each other, now neither one with the strength to claim the artifact at their feet.

Bregenzian Turn 6
The Russ, seeing what had to be done, rolled forward, disputing clear ownership of the leftmost artifact. Meanwhile a singular plasmagunner took aim at the Wave Serpent and sent it crashing to the dunes. Atop the tower the Eldar Autarch laid low the Officer, and the dust settled on the battlefield. Sergeant Fox looked out upon the battlefield. The Xenos had done a heavy toll to his Bregenzian brethren. Konig would not have his prize this day, maybe not ever. He was sure, at least, that no more of his brothers blood would be spilt for it. He watched from afar as the Eldar secured their prize and disappeared into the clouds of sand. So graceful, so deadly, he certainly would not feel bad if he never saw the sleak shapes of those alien vessels again.