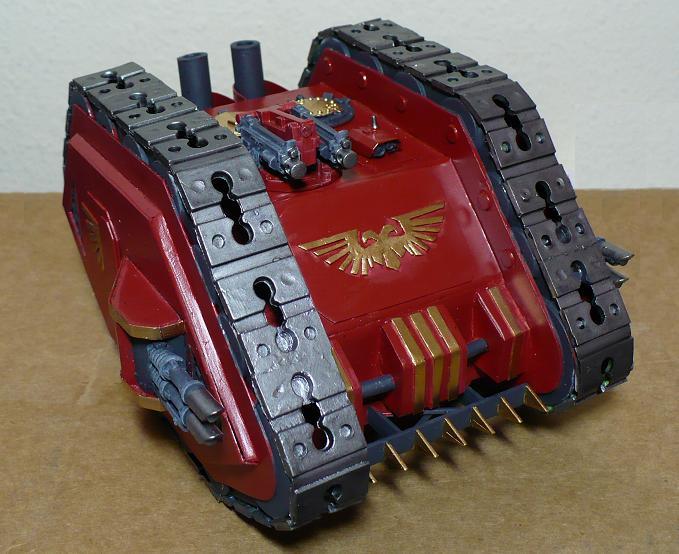 The guys over at http://games.groups.yahoo.com/group/bwc-archive/ have done an amazing job of creating templates for making 40k vehicles out of card-stock. When I came looking for a Rogue Trader era land raider, and couldn’t find one for less than $40 on eBay, this was the first place I looked.

I picked up their templates, but decided to make it out of plasticard for a bit more stability. I’d hate to have it destroyed because someone spilled water on it. Their blueprints were very well laid out and detailed. It did take a few google image searches to try and figure out what part they were making. One word of warning, you have to make sure you set the scale correctly when you print off the sheets. Mine were about 10% too large and I didn’t realize it until it was almost done. In addition to switching to plasticard, I did make a few other changes. I picked up some washers at the store and use them for the wheels. This made sure they were perfectly round and saved me a lot of time trying to cut out circles. I scrounged a couple of top hatched from my bits box to clean up the top of the vehicle. You can also see the hole that was cut for the twin hvy bolter mount. This shot gives a good view of the front. For the eagle, I printed one out on paper, then glued it to a sheet of plasticard. After it dried, I used the paper as a guide to cut it out. On the bottom you can see where I took two of the old rhino rams (for lack of a better word) and glued them together. It looks pretty close to the ones on the originals land raiders. Here is a shot of the outside panel. A matching set of washers were attached to these as well. I used long strips of sprue to offset that middle section. You can see it better in the next picture. Adding the outside panels really beefed up the vehicle. At this point it was starting to look like a land raider. I never liked the look of the lascannons on the old land raiders. They kind of just hung there looking very vulnerable. I deviated from the original design and built sponsons similar to the ones on the Heresy era Land raider that forge world makes. If I had to do over again, I would have made these about another 3/4″ taller. It’s amazing how a base coat brings a scratch built model together. Pay no attention to the lascannons. They were a poor attempt at scratch building. You can also see the eagle wing detail that was placed on the side doors in this shot. Here is a comparison shot with a current land raider. Finally, some treads and real lascannons. Now this is something the Custodes could take into battle.

The boys checking out their new ride. Overall, it was a good build. It was a bit complex and time consuming, but it gives the effect I was looking for. That being said, I don’t think I will be making a squad of these for a deathwing company any time soon.