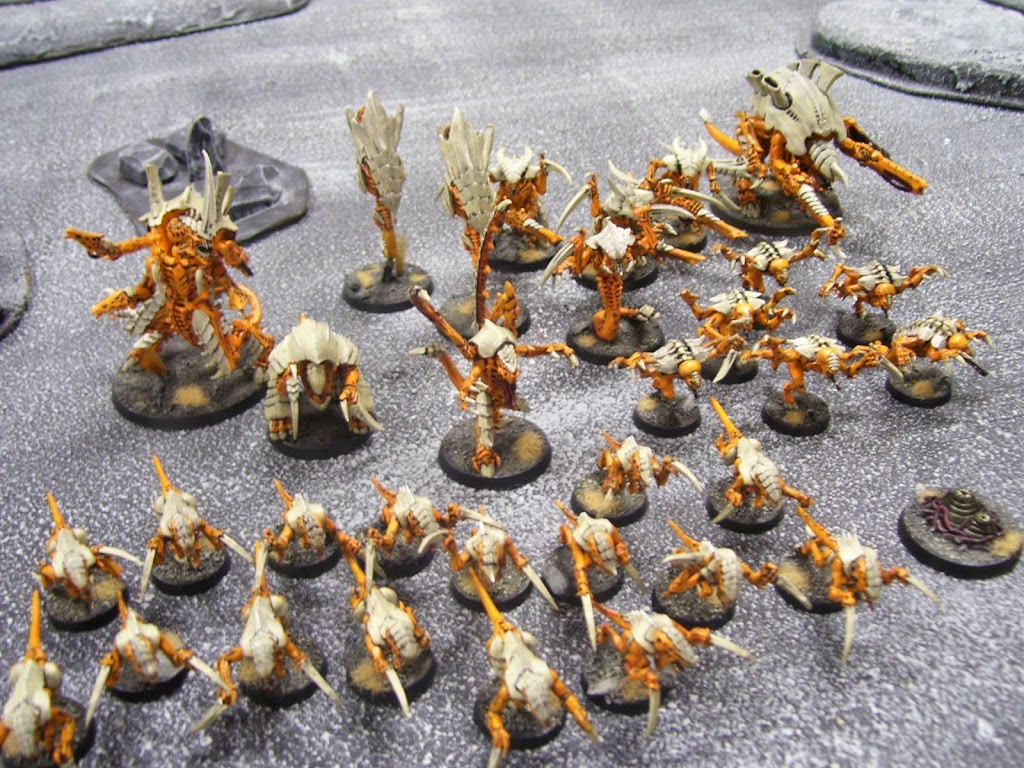 Back again with another battle report. Here we have Kings’ Tyranid-hunting IG come back for a second go, this time with a more appropriate foe, Tyranids! This is the same force I used last time, hopefully its more successful this time. Next report should be with my Methalor IG.

So it’s time for another 1,000 point game, with Cleanse being the very appropriate mission. Sergeant Fox glanced at his scanner, “We have life signs, two hundered clics to the Southwest. It appears they are Tyranids, a small brood group. Move in to engage”. The message went out to all the soldiers. They knew what it meant. By the end of the day they would have new trophies, and the Great Devourer would know a little more about pain.

Bregenzian Turn 1
The light of dawn washes over the ash-choked waste and and reflects off the bony carapaces of the Tyranid creatures rustling before the Bregenzian line. ‘Fex Bane’ rolls around and discharges its mighty demolisher cannon into the horde of creatures, blasting apart a Warrior. The Sentinels ‘Lucky’ and ‘Potshot’ attempt to wound the Carnifex, but there lasbolts flash harmlessly into the rocks surrounding it. On the other flank the Chimaera draws a bead and downs five Hormagaunts. Calavera Turn 1
The wave of bugs move forward into the rotten stumps of a once beautiful forest before them. The Hive Tyrant, seeing the fleshy things before him, unleashes a blast of flesh-eating worms from his devourers, killing three Guardsmen. The Carnifex attempts to harm the Demolisher, but misses his target entirely.

Bregenzian Turn 2
The Storm Troopers touch down lightly in the rocky outcropping to the west of the Carnifex and wound it with a barrage of plasma fire, though many shots stop short into the debris surrounding the beast. ‘Fex Bane’ wheels back in the wake of the beasts, hurling a shell which pulverizes the Tyrant Guard. The Storm Troopers find their quarry Calavera Turn 2
The Lictor, its carapace shifting in the light, bursts out of the ash ambushing ‘Pot Shot’. The Ravener wiggles out of the ground in the far corner, disputing a quarter. Meanwhile the Genestealers and Hormagaunts continue to advance. The Carnifex takes aim with its venom cannon, shaking the crew of ‘Fex Bane’. The Tyrant, with the scent of blood in the air, unleashes its devourers, finishing off the Guard squad it had damaged before. Bregenzian Turn 3
The Guardsmen, in a very familiar situation, prepare for the Tyranid charge. The Storm Troopers continue to hunt their prey, though they seem more adept at hunting themselves, their plasmaguns killing their users, while their shots pound lightly off the rocks. Meanwhile the gunline opened up fire, leaving only a single Genestealer standing, and badly wounding the Hive Tyrant.

Calavera Turn 3
The Hormagaunts, sensing that their time had come, broke from the trees at a lightning pace, plunging deep into the Bregenzian lines. The Tyranid Warriors silently took aim and killed five Storm Troopers with their acidic deathspitters. The reamining Troopers broke cover to flee back towards their lines. The Carnifex once more knocks the Demolisher off-kilter, shaking the occupants. The Hive Tyrant charges into the sentinel ‘Lucky’ and blowsw it apart. The Hormagaunts pull down the platoon command in a dervish of scythes and consolidate into a nearby infantry squad. The Hormagaunts get dug in

Bregenzian Turn 4
The Command HQ, seeing their troops in danger run up to the melee, preparing to counter-charge. The Chimaera spots the shifty Lictor and lays him low. Meanwhile the Command HQ kill all but two Hormagaunts and they flee into the safety of the Tyrant’s synapse.

Calavera Turn 4
The Tyrant, sensing more threatening biomass, bores the flesh from more Guardsmen with his devourers, leaving only the Sergeant standing. The last Genestealer and remaining Hormagaunts charged into the Sergeant, eviscerating him before his comrades. The Guardsmen precariously hold their position

Bregenzian Turn 5
The Command HQ charges the last Genestealer and finishes him off, consolidating deeper into cover.

Calavera Turn 5
The hives of the Tyrants devourers almost entirely spent he destroys another infantry squad, leaving only a bloody mess. He skulks behind the trees waiting for the eventual counter-fire.

Bregenzian Turn 6
The Demolisher, completely unharmed wheels into the Southeast quadrant and shoots a shell through one of the Zoanthropes psychic shields, destroying it. The Tyranids consolidate their territory

Things of the Match This award is going to be split between the Hive Tyrant who single-handedly killed over thirty Guardsmen while having only one wound from turn three on, and the rocks on the board, which allowed me to pass a ridiculously large number of cover saves.