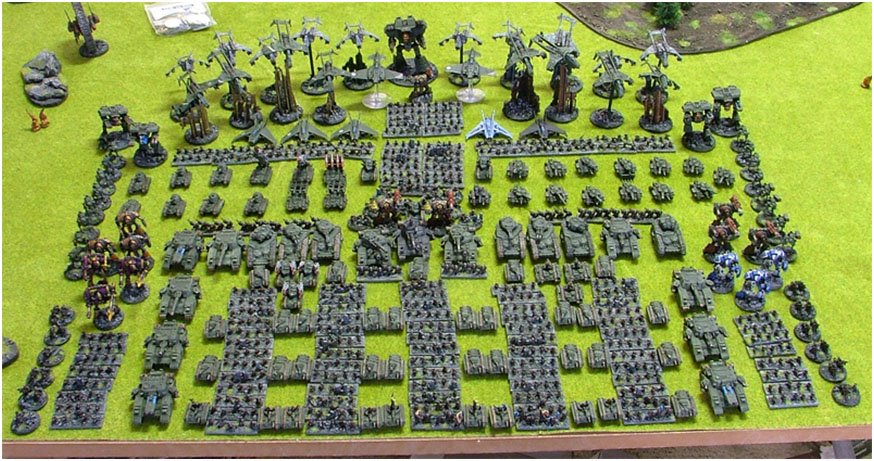 
If you’re like me, you’ve spent most of your childhood and beyond playing Warhammer 40,000. When I was a kid, it was called Rogue Trader, but it meant the same thing: awesome skirmish battles! But there comes a time in your life where skirmish battles aren’t enough. You want…BIGGER.

Enter Apocalypse, which provides the rules for very, very large skirmishes. And yet sometimes even this isn’t enough because even massive Apocalypse games seem insignificant when compared with the artwork and fluff surrounding warfare in the 41st Millennium. You don’t want a skirmish.

You want a WAR.

Your prayers have been answered. Say hello to Epic:Armageddon.

Epic is the 6mm ruleset for large-scale battles in the Warhammer 40,000 universe. Your typical Warhammer 40,000 battle is a skirmish between a few squads of troops and a couple of vehicles, whereas Epic features battles between armies.

The Epic-scale game has actually been around for a long time, almost as long as the Warhammer 40,000 universe in which it is set, and Epic:Armageddon is its 4th edition. Picture in your mind’s eye a formation of ten Leman Russ main battle tanks as it thunders forward to engage several companies of Guardsmen. This vision could form the basis of an entire Apocalypse game requiring several hours. In Epic, it is a single activation requiring a couple of minutes. Epic achieves this by playing at a higher level of abstraction than does Warhammer 40,000. Each unit of troops is represented by a single stand (model), which fights as part of a larger formation. A typical Imperial Guard stand, for example, features five Guardsmen models and fights in a formation of 11 other stands (a company) that is led by a single Commander stand. As you can imagine, moving 13 models and rolling an equal number of dice to shoot takes a lot less time than moving and shooting with 65 models in a Warhammer 40,000 game. In a game of Epic, you are often fielding armies of hundreds of troops and dozens of armoured vehicles, super-heavies and titans. Speaking of manoeuvring, it’s worth mentioning that combined-arms tactics is the order of the day in Epic. How you manoeuvre your forces is at least as important as what forces you choose to field, and how you combine their effects on the tabletop. A detachment of Terminators is deadly in the right situation and with appropriate support; without these things, they are an expensive target.

You might be concerned that this higher level of abstraction would reduce the “flavour” of each army. Nothing could be further from the truth—if anything, each army plays “fluffier” in Epic:Armageddon than it does in Warhammer 40,000 thanks to judicious application of race-specific and army-wide special rules. Marines, though few in number, hit fast and hard, and they’re tough as nails. Eldar are fragile one-on-one, but pack a mean punch when in numbers, and in speed and manoeuvring they are unmatched. Imperial Guard have the best armour and artillery, and with low-cost infantry support make for a very tough opponent. Tyranids are a seething mass of teeth and claws that devour all before them—if they are allowed to close and engage, they are nigh on unstoppable.

You might also think that the smaller model size reduces scope for artistic expression, but rather the 6mm form provides different opportunities. Epic conversions are plentiful, and readily catered for in the rules.

Epic is further blessed with a lower cost of entry than its 28mm cousin, not least because the rules for Epic:Armageddon are all freely available as PDF downloads from the Specialist Games website. In addition, a vibrant community of enthusiasts has (with support from GW) extended the rules and army lists over the years to a finely tuned and balanced gaming system—balancing of both the original and community army lists is a continuing exercise, too, with revisions usually being released annually.

Plastic and metal Epic miniatures are available through the Specialist Games section of Games Workshop’s online store. An additional lineup of resin models is available via GW’s Forge World subsidiary, including Tau and Grey Knight units. Epic:Armageddon is not a complex game, but it is not simple either. It is easy to learn, but can be difficult to master. To achieve victory, you must play to your armies strengths and exploit your opponent’s weaknesses.

Epic:Armageddon is a great addition to your Warhammer 40,000 gaming. This article has scratched the surface of what the game provides the hobbyist gamer. Future articles will discuss how to play the game, working with 6mm miniatures and creating great Epic terrain, as well as winning tactics and strategies.

If you would like to learn more about Epic:Armageddon, download the rulebook PDFs (and its various expansions) or purchase the books online from the Specialist Games section of the GW website, and keep your eyes peeled for the next article about the Epic hobby.

~ Bigred here. Lets give it up for GR00V3R taking the time to put that great article together for the BoLS community. He tells me that there are more Epic articles coming so lets hear what you all think of both the game system and his intro piece. I admit to being an old time epic player from as far back as Adeptus Titanicus (which is still sitting on a shelf 5 feet from my computer). Its a great game that lets you enjoy the 40k universe from yet another “persepective”. Its also pretty easy to pick up epic armies on ebay.

With lots of talented groups of Specialist Games players out there around the world, you can expect to see more of these articles popping up from time to time.